Your stories, my stories: Stories of common people

“We have a history of 5,000 years of human civilisation and all we have heard are stories of kings, pharaohs, maharajas, nowadays celebrities. But where are our stories?” asks Pratik Ghosh, a Mauritian businessman who has been working on a project called Justori for almost two years.

Justori is a storytelling app designed for everyone – from young people searching for their voice to more mature narrators looking for an audience. The app is fundamentally international: the idea for the project was born in Dubai, it was registered and trademarked in Mauritius, developed in Calcutta, and the administrative setup was based in New York.

To spread the word of the app, it has been presented at an international conference in Berlin. It has also recently been taken to investors in London and presented in Edinburgh.

Justori is a free social network platform, allowing anyone to record a story in any language on a smartphone. Justori is also intended for the general public who simply want to listen to stories.

“This service aims to create the world’s first community of storytellers, storytellers and listeners, whatever their language.”
– Pratik Ghosh

The app is not targeted towards any demographic in particular. However, Ghosh hopes that the younger generation will be excited to share their stories from their perspective to the world. He is also excited to hear “their analysis of the world, their aspirations, expectations and even their frustrations.”

There are hundreds of podcasting apps in the Apple Store and Android’s Google Play. However, what makes Justori different is that it is built with the creator in mind; users can record and upload directly onto the app. They can also create custom channels for it to be shared, either publicly or within a selected group of friends.

The idea of the app was inspired by a visit to see some of his friends a few years ago in Dubai, UAE. Pratik noticed that the family’s son was refusing to eat his food. He settled in front of the boy and persuaded him to finish his meal with a story. Ghosh was inspired by how effective this was and started thinking more about the ancestral tradition of storytelling. Pratik likes to quote Maya Angelou, who stated “that we are more alike than un-alike,” you build a universal fraternity of human beings. 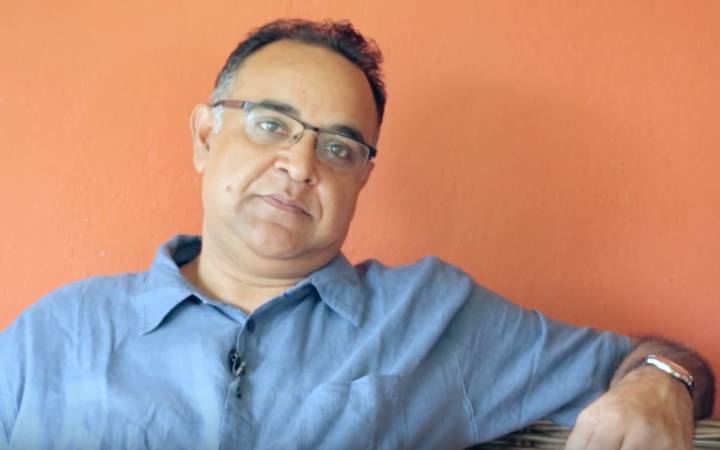 It took several months of hard work to create the application. For Pratik, this tool has a civilisational interest, as he believes that “recording stories allows societies to preserve their languages, their cultures or various networks of informal knowledge invaded today by the dominant languages ​​and cultures.”

Pratik explains how to set up the app; after downloading and installing it on a smartphone equipped with the Android system, the Justori application offers two spaces to you. The first is a virtual studio that can record your stories using your mobile as a dictaphone. The other is in the form of a library, in which the audio will be archived. The interface asks you to classify your narrations by languages ​​and genres: story of adventures, news, comedy, drama and many other categories that best suit your content.

You need to fill in the title of the work, the name of the author, if it is a cover and even indicate your accent and language. The objective of the platform is to encourage its listeners to record stories, in order to “celebrate all the sounds of the languages ​​and cultures of the world, to share them without borders, in fraternity.”

“All our dissimilarities can never make us forget that we have much more in common.”
– Maya Angelou

Since the app is relatively small and still growing in users, Artefact asked Ghosh if there had been any issues with moderation as the content is not sorted by any algorithm or a large team to filter through. So far, there has been one issue with a picture of a semi-nude girl. The content of the audio piece was taken into consideration and the image was allowed to be kept by the user.

The issue of moderation is a complex and is difficult to navigate in the current climate of social media and hidden algorithms. Currently, Ghosh is the main moderator and acknowledges these obstacle, but, is looking to employ more people as the app gains traction.

With regard to the actual app itself, the interface is clunky and over-populated with options for a mobile app, but, it is an intriguing and mouldable concept from storytellers to practice, share, and learn from others in the small but growing community of ‘Justorians’. Hopefully as the app is becoming more developed it will be more streamlined and easier to make, upload, and discover new content.

Clearly the app is still in progress, but it’s an interesting concept for budding storytellers and acts as a launch-pad for those considering making their own podcast. “Justori is an audio medium, the project is about telling stories and listening to stories, so this application allows people, anybody, anywhere to tell stories and share it with others,” says Ghosh.

“Justori is a platform that gives you a voice, it liberates people.”
– Pratik Ghosh

There are currently estimated to be around a thousand users from all over the world, from India to the US. One avid user of the app is Lolita Gentry from Honolulu: “With Justori, not only can I receive instant feedback and encouragement for my stories, I enjoy experiencing the creativity of other’s unique stories. Justori taps into our intellect and creativity to bring international strangers together celebrating art, culture, and diversity.”

Pratik’s hope for Justori is that the app will remind us that a common thread of humanity is fed through these stories from a wide variety of backgrounds and perspectives. In the end, “despite our linguistic diversity and other differences, our emotions, sorrows, pains and anxieties are the same from one culture to another our stories suggest these similarities.”

You can find the app online or in the app store at https://www.justori.com/justori/stories