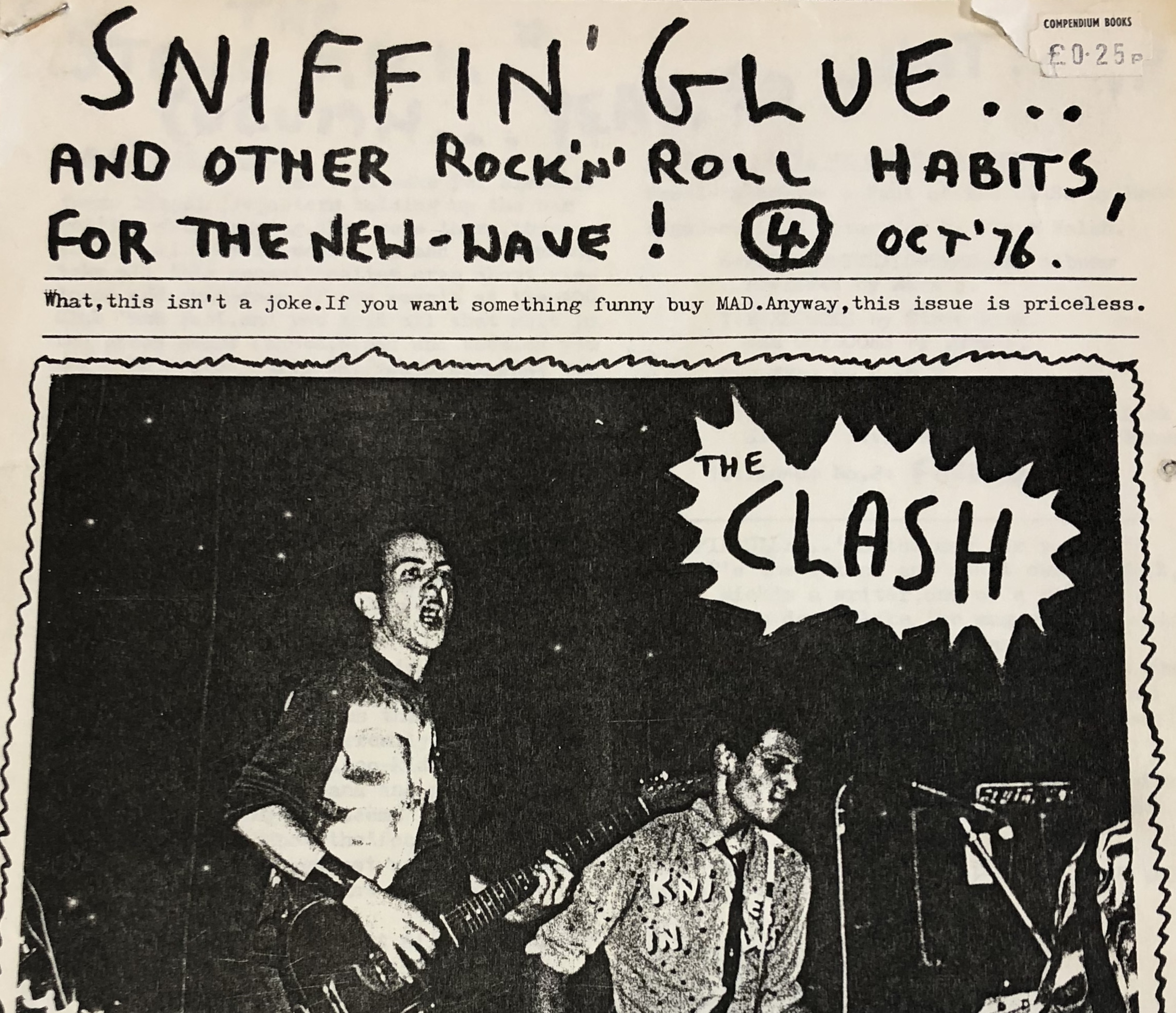 London in the mid-1970s was an exciting place for fans of punk music, with people from across the boroughs delving into this new lifestyle that wasn’t yet fully understood.

Everything we know about punk and what it stands for can be accredited to those formative years where bands like The Sex Pistols and The Clash were still playing pub gigs to 20-odd people.

Punk as a culture means, among other things, anti-establishment and anti-consumerism as well as a do-it-yourself ethic and a strong aversion to “selling out”. Sniffin’ Glue came about at a time when punk was still defining itself whilst simultaneously rejecting the need for a definition at all – it just was.

At the time the only places you would find music literature were publications like Melody Maker, Sounds, New Musical Express (NME) and Record Mirror, which were all highly established and focused mainly on popular rock bands.

As a 20-year-old, Mark Perry noticed that there weren’t any magazines that wrote about the music he really cared about, so this normal bloke from Deptford turned his obsession with The Ramones into a DIY fanzine devoted to the emerging culture surrounding the punk bands he and his mates loved.

Using an old typewriter he got as a gift as a child, then taking the pages down to his local photocopy shop, Perry created a zine that became a vessel for young voices to be heard at a time when they had no other way to do so. Sniffin’ Glue was the first of its time, which is probably why it remains so iconic and significant today. 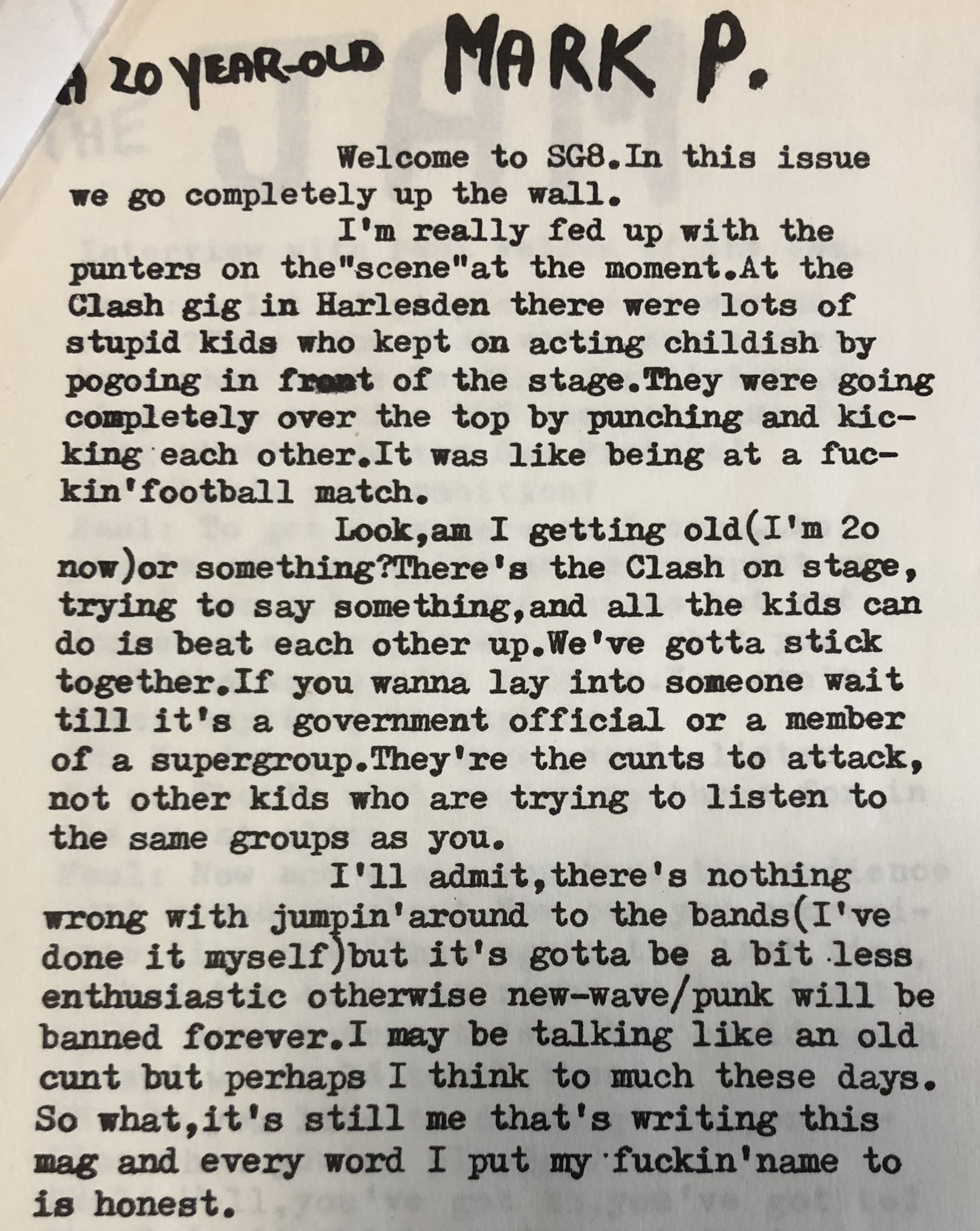 When SG came out it was pre-internet and social media. Nowadays, if young people feel strongly about a band or genre of music, they can easily look for online communities on sites like Twitter, Reddit, Instagram or even create their own blogs. It’s easier than ever to find validation in your interests and identity, no matter how obscure, but back then fanzines were one of the only ways to get that alternative opinion across, and readers saw it as reassurance that they didn’t have to think or live in the way that their parents did, and that it was okay to create their own identity without feeling isolated.

Fanzines provided that sense of community and shared values, and solidified the collective ideas of its writers and readers.

Teal Triggs is a historian, writer and professor at the Royal College of Art who focuses on graphic design, design history, self-publishing and feminism. Triggs is the author of Scissors and Glue: Punk Fanzines and the Creation of a DIY Aesthetic which takes a close look at early fanzines like Sniffin’ Glue and those that followed in its footsteps, and their role in cementing the DIY aspect of punk culture.

“As a graphic design historian I’ve had a longstanding fascination with DIY culture; especially a history of the graphic language of fanzine,” says Triggs. “The cut-n-paste aesthetic was appropriated by punks in the 1970s as it is now, on a more widespread basis. For the book Fanzines, I was interested in exploring, in part, why the immediacy of collage, magazines cut-outs, hand-scrawled lettering and rub-down letterset provided an exciting visual language for generations of punks and zine producers that followed.”

““We’re not into music. We’re into chaos.”
– The Sex Pistols

In the book, Triggs quotes academic Stephen Duncombe who describes the ‘chaotic design’ of these publications, encouraging others to “make your own culture and stop consuming that which is made for you”. ‘Chaotic’ is an appropriate way to describe the pages of Sniffin’ Glue, with its haphazard layout, felt-tip titles and drawings, frequent spelling mistakes and swear words.

In Triggs’ book, former Black Flag frontman Henry Rollins is quoted describing the time when SG first started, saying that “rock was boring, rock was damn near dead”. Punk music was seen as a deviation from the mainstream music industry and ‘provided something new’ through its independent, DIY approach.

Punk fanzines attempted to capture the exciting, chaotic feel of punk music at the time and recreate it visually. The Sex Pistols summed it up when they famously said in the NME ‘We’re not into music. We’re into chaos.’ Punks had an ‘us and them’ mentality that brought them together, it gave them a purpose to go against the system that shunned them and embrace the fact that they were seen as outsiders. 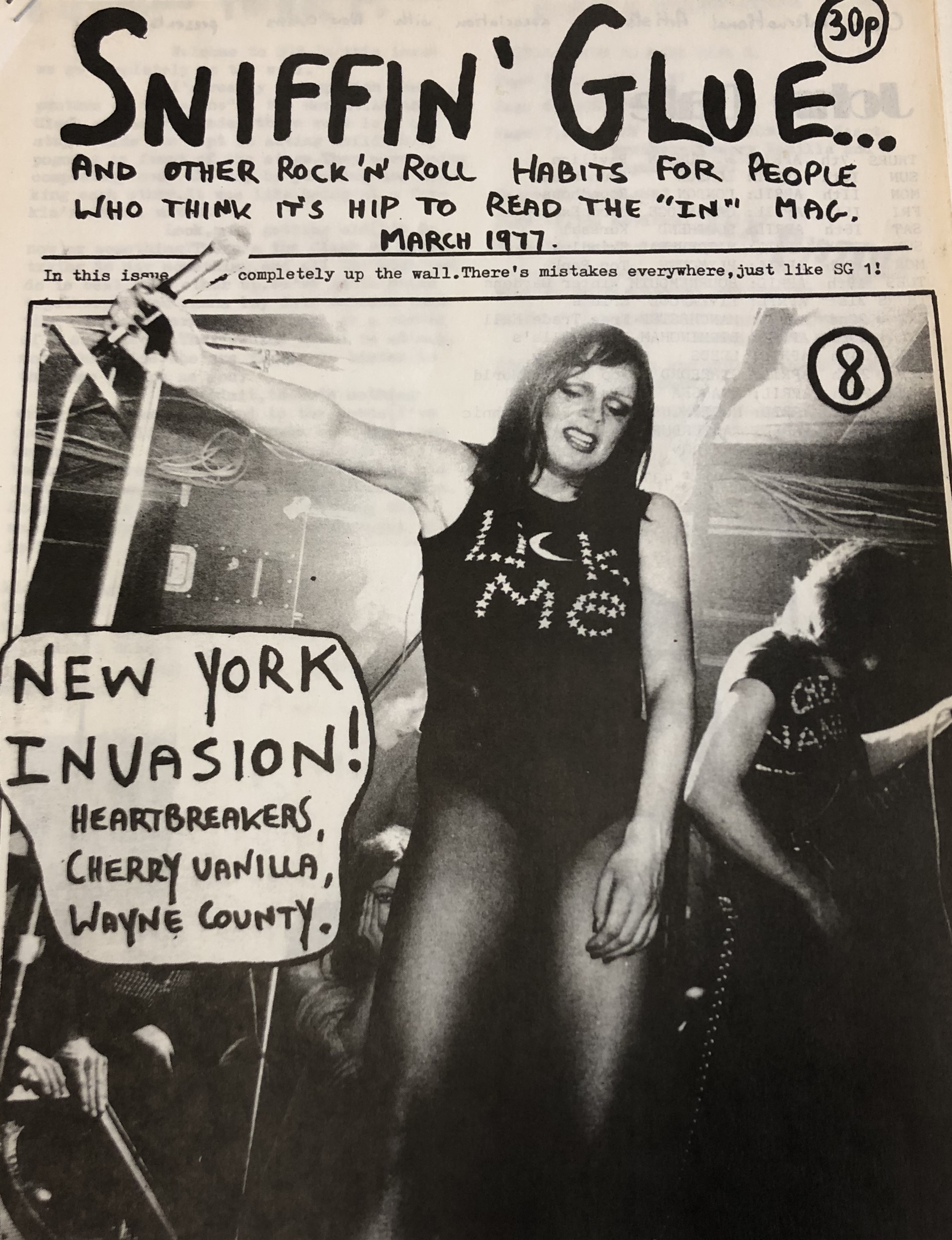 “Sniffin’ Glue, Ripped and Torn, Chainsaw and other punk zines evidenced a sense of urgency; not just how they looked but in the writing offered to like-minded individuals by their producers.” When asked what resonated with her in these early zines, Triggs says that it’s “the authenticity of the ‘voice”; in the same way that individuals would feel confident enough to pick up a guitar and play a chord, they would write a story/review or take a photo and share ideas through a photocopied zine.”

“Zines captured the energy of an emerging punk movement through interviews with band members, and images of fashion, such as safety pins, haircuts and bondage gear. This was about capturing the symbolic political agenda of a generation.” Triggs believes that there’s a lot we can learn from the punk ethos and their directness of expression, “Punk asked us to dissent; to be anti-everything and to question our politics and to address head-on complacency and the establishment. Get out and do-it-yourself!”

Mark Perry noted that he thought SG was successful because it was “more discerning than the others”, that other fanzines “said what was fashionable rather than being honest and telling readers exactly what they thought”. An extract from an early issue written by ‘Steve at Rough Trade’ does exactly this: “Fight for the right to maintain your individuality, fight for the right to be able to walk down a street unmolested by the authority that was designed to protect us that has turned into the moron machine you all know could devour us all.

“The war has been started by them, they have prevented the people from hearing the Pistols (in reference to the Sex Pistols’ music being banned in the UK), they are now trying to prevent it from appearing in the charts altho it has outsold all other records in the country, but what are you doing, fuck all!”

Teal Triggs believes that punk fanzine culture is still very much alive today and “includes those passionate about everything to do with punk and its legacy.” She references the Riot Grrrl movement that combined the style and politics of punk with feminism, saying that they “took a cue from punk and gave it a “revolution grrrl-style” twist.”

“Zines continue to provide a platform for giving a voice to fans, whether that be of punk, Pez dispensers, vegan food or whatever. Each fan community generates a sense of belonging and gives an identity to individuals who declare their passion for a subject.” 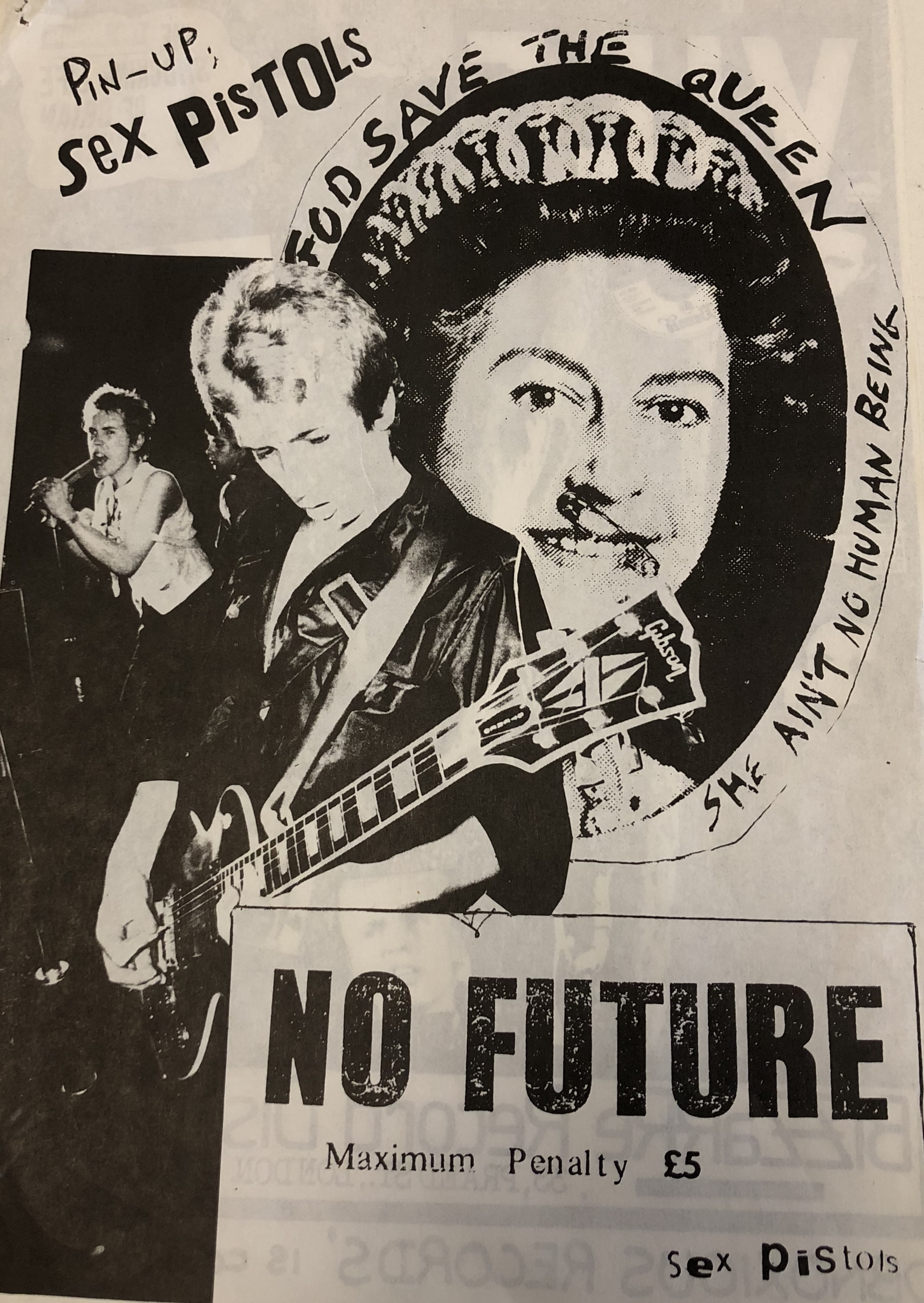 While one might think that the internet and online communities might make zines less prevalent, Triggs argues that it actually does the opposite, “I don’t think the internet has taken over. It has made printed zines even more relevant today. People want to hold the material object and smell the photocopied ink. You have zine collections and libraries which hold the historical artefacts, but also zine producers who share their zines at zine fairs. Zine Distro’s may appear online to help producers sell their zines internationally, but you still get a printed zine popping through the letterbox.”

In a modern society that places so much importance on marketability, sales numbers and deadlines, writing can sometimes feel less like art and more like a business. Zines act as a creative outlet that gives complete creative freedom to its content creators, without the heavy hand of corporate censorship holding them back.

Traditional zines like Sniffin’ Glue were instruments of protest and change, and they continue to be. For those who weren’t satisfied with the highly-curated, watered down, ad-heavy mainstream media, zines were a breath of fresh air. With many zines just breaking even from sales just allowing them to publish the next issue, readers were assured that there are no hidden motives and its purpose is just to share a message.

No matter the topic, there’s probably a zine out there about it – go and find one that strikes a chord with you. If there isn’t, just make your own. Anyone can do it, and zines are a wonderful thing to support and contribute towards, encouraging a deeper understanding of others’ experiences and giving a platform to those who wouldn’t normally have one.