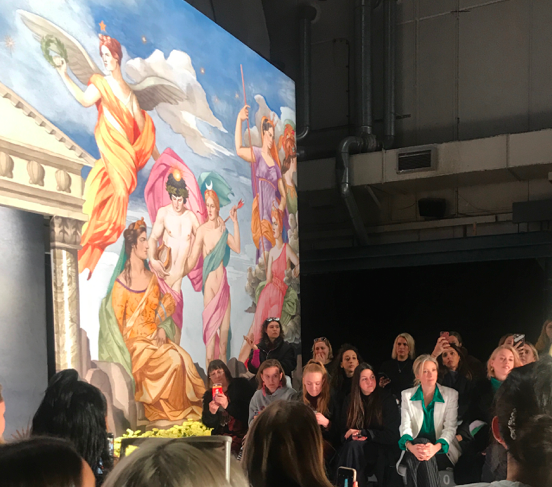 With a backdrop of serene blues, rosy pinks and lavish golds, it was hard not to be instantly soothed by the beauty of the venue, despite the chaos that is London Fashion Week.

The celestial runway mimicked a soft cloud of which Weiland’s angels were soon to descend. Greek Goddesses adorned the light blue sky that acted as an entrance to the runway.

The audience was comforted by the watchful eyes of their mythical favourites, Gaea, Goddess of the Earth, Amphitrite, Goddess of the Sea, Atena, Goddess of Wisdom and Venus, Goddess of love. The fresco was completed by a bed of yellow carnations that lay underneath the wall. A little reminder that there are heavenly items within our own realm too.

The set design was arranged by Suzanne Beirne, who has previously designed sets for JW Anderson and Versace. Styling was by Tom Guinness who has in the past styled for clients including Dazed and Confused and Pepe Jeans – which aligned the qualities of strength and femininity harmoniously.

The team achieved an equilibrium of power and mystic and set the tone for the show that was moments away which hosted woman of equal power: Actress, Helena Bonham Carter, Model, Pixie Geldof and Ex-Editor and Chief of British Vogue, Alexandra Shulman within the front row. 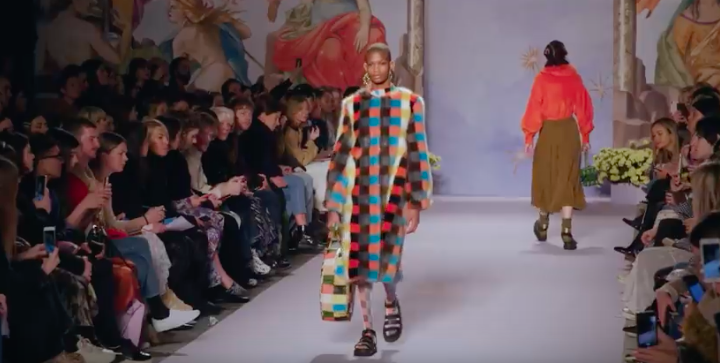 Hannah Weiland, the young British designer, who studied History of Art before obtaining a diploma in Surface Textile Design from the London College of Fashion launched her brand in 2013, and evidently remains enthralled by the subject of her studies.

The runway show began as model Olympia Campbell opened in a floor-length banana coloured satin dress. Dark yellow ruffles crept up her neck in a regal fashion whilst long finger length sleeved flared out and tied back in at the wrists. Synched in at the empire line by the same shade as the neck ruffles, the silhouette was classical, feminine and modest, with a modern and girly punch that came along with the choice of colouring. Like Spring coming into bloom, Weiland’s opening piece set a tone of optimism, tranquillity and freshness.

The colour palette was predominantly yellow and black, with splashes of nudes and oranges coming into play every so often, as well as recurring polka-dots and puffed-sleeves running through the collection. 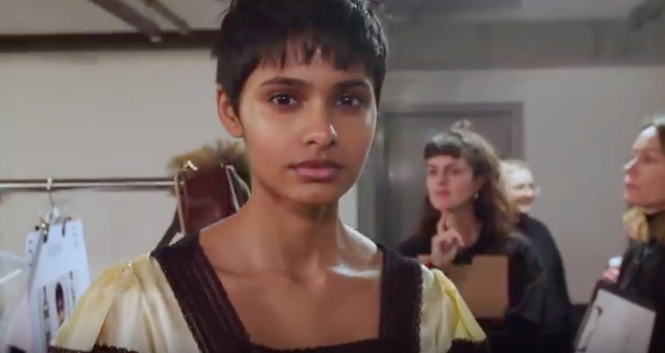 Looks two and three adhered beautifully to those themes and saw young models with glowing skin, softly waved hair and large, lavish earrings wear yellow and black to knee’s length. High neck and long sleeve garments were completed with minimalist shoes: exclusively Converse and Dr Martens which allowed the models to almost float down the runway.

Originally known for her eccentric faux furs, the staple of the designers was not a-miss in the collection. Instead, Weiland updated her colour pallet from Spring/Summer 18’s fuchsia pinks and forest greens to the Autumns Winters sunshine yellows, soft nudes and blood orange updates. A charming way to incorporate cheerful colours into the dreariness of winter.

Another staple for Weiland is her classic pearl encrusted handbags. This season the designer broadened her repertoire by amping-up the size of the bags. No longer coming in the perfect for a Chihuahua size only, the it-bag of the last year has super sized so that you could perhaps fit in three of your favourite furry animals. 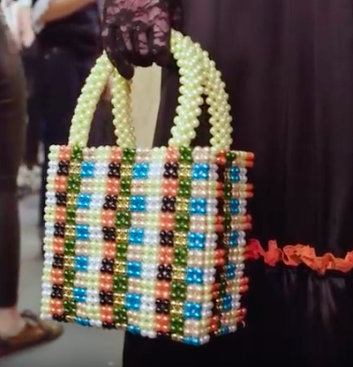 Aside from the regal touches which recur throughout the collection, there is a beautiful vintage theme that ties together many pieces. Looks 19 and 20 explore a black and white vintage motif of grey clouds and abstract faces. Feminine yet feisty the pieces resemble a ‘Cruella de Vil’ style coat which contrasts drastically with the oversized sunflower yellow coat featured a few looks earlier.

Following on from the coats, in the same complex pattern, a model descended the runway in a floor-length gown featuring a square neckline, puffed shoulders and a three-tier layered skirt. The hair was gently pulled back into a Grecian style braided up-do with delicate pearl embossed circular earrings hanging by the jaw and aptly accessorised by a seashell and pearl adorned handbag, the new cut and accessories took the print from villain to goddess and Shrimps reputation for beauty and femininity was quickly restored.

Of the 27 looks to grace the runway, look 22 got the most obvious praise from the audience. A black midi-length satin dress with a floral appliqué bust, a large peter-pan style collar and elbow length puffed sleeves encouraged gasps from the onlookers. Subtly striking, the use of ample material from the waist down allowed the skirt of the dress to move beautifully in the air as the model carried it down the runway and received an “I need that dress” comment from model Adwoa Aboah who was seated in the front row for the show.

The remaining looks in the collection veered away from the bright colours that opened the show and moved towards a darker colour palette that relied heavily on lace and satin to portray the more mature side of the Shrimps collection. The handbags again reduced in size and delicate, flirty earrings were swapped for large fluffy headpieces.

Weiland’s vision came to life in as much of a mystical way as she could have hoped, after drawing inspiration from author Madeline Miller books, and Steven Fry’s Mythos her collection paid homage to a more idealistic version of life. For her first runway collection, Weiland did beautifully. Now we can look forward to the many more magical creations yet to come.