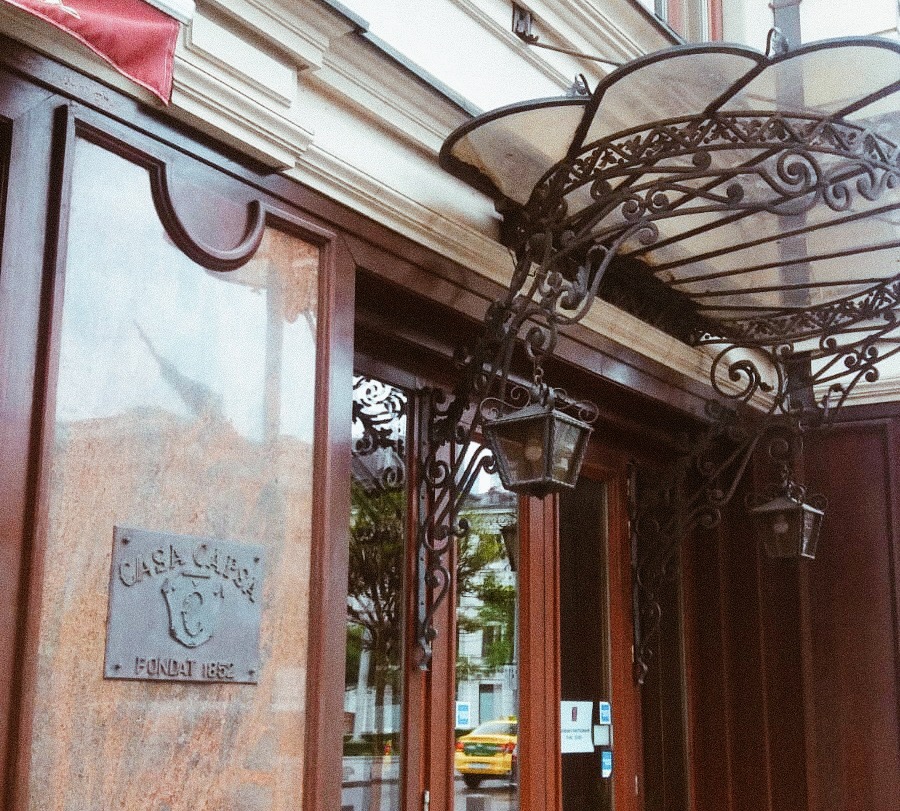 Part of Romania’s history was written in the centre of Bucharest, not far from the Royal Palace. It was here where literary careers have been established, ministers changed, and disputes have been resolved, not always by peaceful means. Casa Capsa (Capsa House) on Victory Avenue has been one of the “queens” of the area of Bucharest known as Little Paris for over 100 years.

I’ve often crossed Calea Victoriei (Victory Avenue) in front of Casa Capsa but I didn’t dare to come in. Maybe just so I wouldn’t disturb the image of those who were still sipping absinthe or peeling away Parisian delicacies in the times past.

The writers who made my childhood beautiful, but also those who helped me through my teenage years; those that I reread now with joy: Ion Minulescu, Tudor Arghezi, Marin Preda, Ion Barbu, Liviu Rebreanu, Camil Petrescu. Sarah Bernhardt, Josephine Baker and Enrico Caruso dined there as did La Belle Otero, the Spanish actor and courtesan, lover of kings of Spain, England, Germany, of Russian grand-dukes and a prince of Monaco.

Casa Capsa appeared in my mind as a moving sanctuary for great writers, journalists, prominent people who shaped the history of a country. But when I finally walked through the doors, one recent Saturday night, I found a faded establishment whose years of grandeur are just a memory. 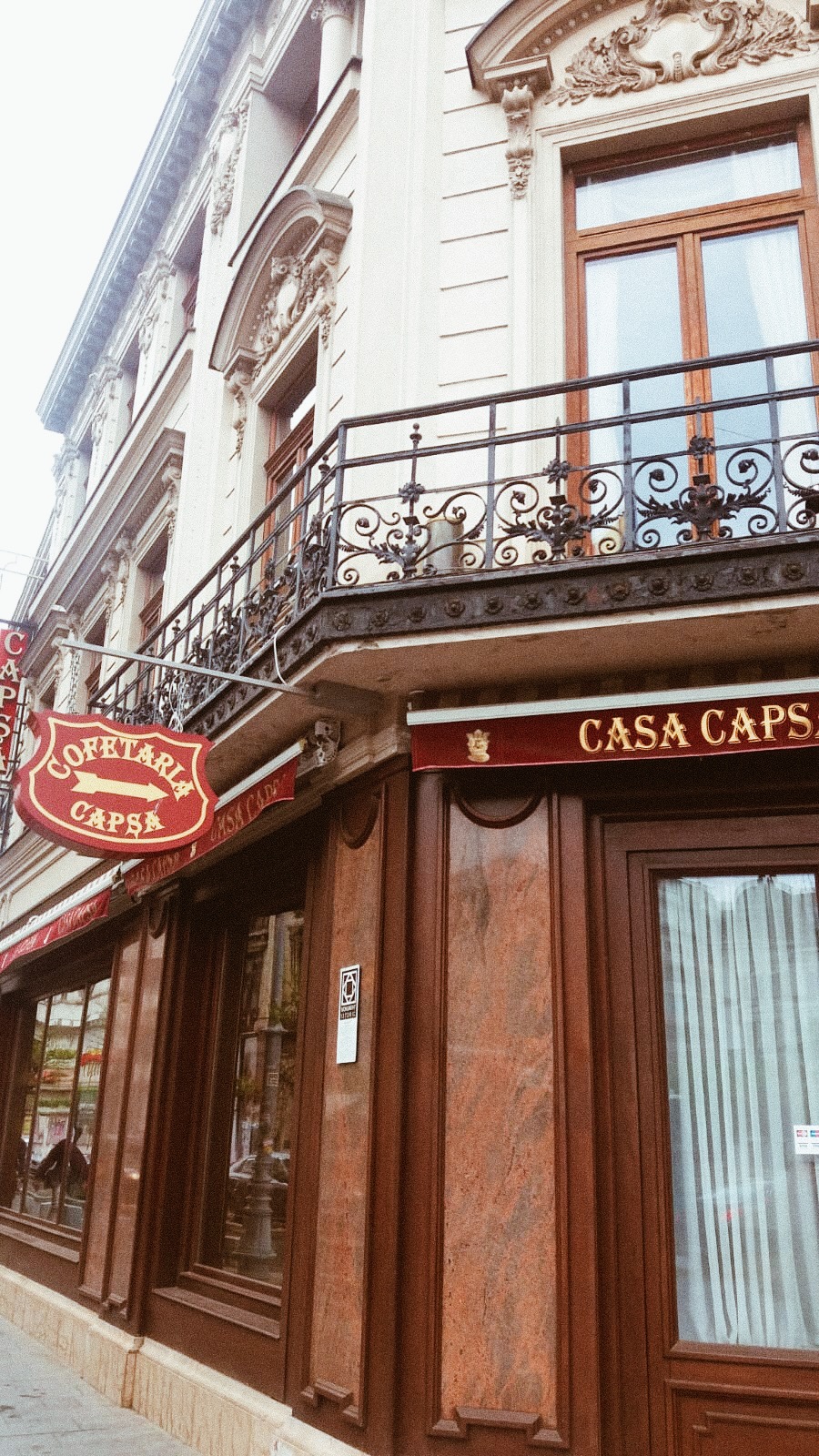 The first café in Bucharest appears in documents to have been established in 1667, during the time of Radu Leon, ruler of Wallachia. In 1882 there were 35 confectionery shops in Bucharest, of which the oldest and most prestigious remains Capsa, founded in 1852. These were the places frequented by the personalities of the past.

The history of Casa Capsa is linked with the destiny of the descendants of Dumitru Capsa. His arrival on Romanian soil was linked to one of the most dramatic episodes of Balkan history: the fall of the city of Moscopole, capital of the Aromanians, wiped from the face of the earth in 1788 by Ottoman artillery. The survivors of that genocide were scattered everywhere, and many of them came to the Romanian lands. In 1782, Dumitru Capsa first fled to Brasov, where he married Zamfira.

Then he moved to Bucharest. He had four boys, and Constantin, the family’s youngest, took over his father’s job: fur trade. Becoming a true craftsman, Constantin then married a girl from Ploiesti, with whom he had 12 children. Four of them, namely Vasile, Anton, Constantin and Grigore, are the ones who, in the middle of the 19th century created Casa Capsa, the elegant confectionery which became famous throughout Europe.

The modernization of the Romanian Principalities was also reflected on local gastronomy. Oriental, spicy dishes, with heavy sauces were slowly replaced by French and German culinary refinements. The same happened with the centuries-old tradition of the dense sweets, coming from the Turkish Byzantine.

The Baklavas dipped in honey, the Lokum Turkish delight, scented sherbet or other heavy-sugared desserts began to lose ground in front of chocolate and the bonbons brought from Paris, as well as wines, cognac and fine liqueurs from all over Europe. This was the time when the Capsa family set up a business which proved a huge success.

The Capsa brothers were also the first to introduce ice cream production in Romania, starting with Bucharest. This was served at Casa Capsa in special crystal cups that were garnished with fresh whipped cream and the Capsas’ confectionery shop soon became the most famous in Bucharest and one of the best in Europe. In the beginning, the merchandise was brought from abroad. Later on, Casa Capsa began to hire Romanian confectioners. 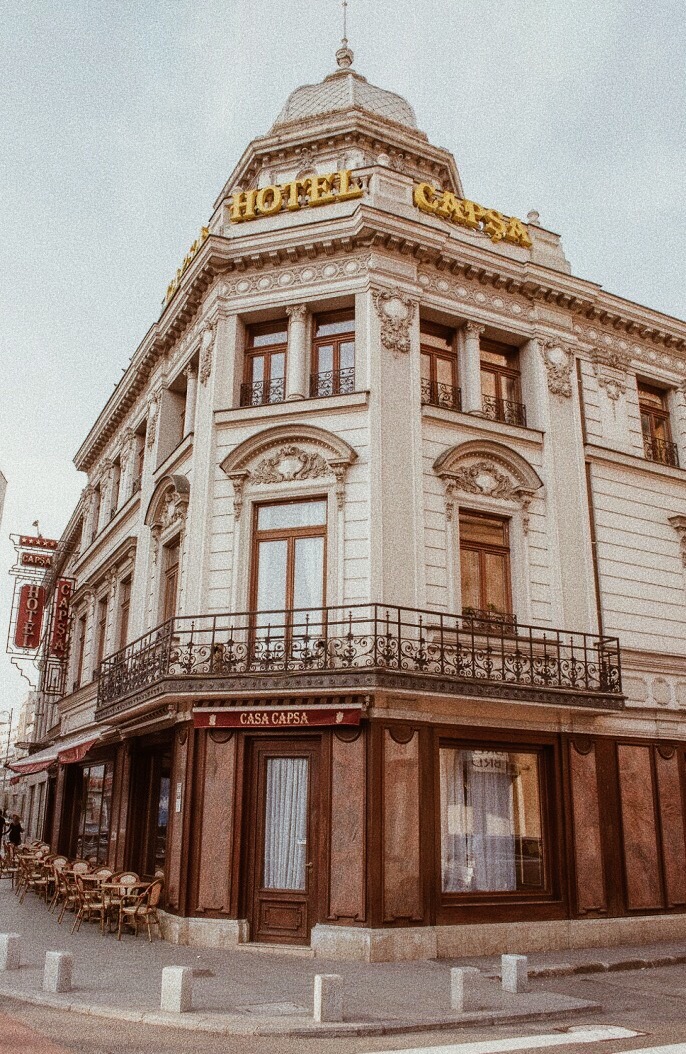 Skilled merchants, the two brothers understood that the packaging sells the product. In 1856, on his first trip abroad, Vasile brought along fondant candy, ganache, chocolate eggs and English caramels, as well as wooden boxes produced in Carlsbad, Vienna or Hamburg. Their confectionery shop started using paper lace, sheets of gold and silver, tinfoil and decorative ribbons.

In the years that followed, Capsa confectionery was run, in turn, by all the brothers involved in the business. From 1869 onwards, it was only Constantin and Grigore Capsa. Sent to study in France at the renowned Boissier House, Grigore was so skilled that he was the only foreigner allowed to attend the Paris Exhibition where he presented some of his confectionery masterpieces to Empress Eugenia. Impressed, the sovereign promised to make him a supplier for the imperial court.

When Constantin withdrew from the business in 1876, Grigore decided to expand it. Thus, in 1886 Casa Capsa had a hotel and Supper Salon which became the famous Capsa Café. This is the moment the golden age of Casa Capsa begins. The place becomes the official meeting and creating a place for personalities in the field of politics, art, literature and culture.

From the very beginning, Casa Capsa was noted for its elegance: upholstered chairs and armchairs in red velvet, marble-clad wooden tables imported from Italy, Venetian mirrors and velvet drapes. In addition to the delicacies served, customers could read the papers, which, in order not to be damaged, were placed on wooden supports of the size of the newspaper so that the pages would not be bent.

Unfortunately, during the First World War, Casa Capsa was seized by the Germans who emptied the cellars and a large part of the rooms. A year later, in 1917, Casa Capsa was passed to the Bulgarian allies, who turned it into a casino under the name of Casino of Bulgarian officers and soldiers.

After the end of the First World War and the peace conferences which officially recognized the union of all Romanians in a single state, the consecration of the Great Union took place during the celebrations of the Alba Iulia town on 15 October 1922. 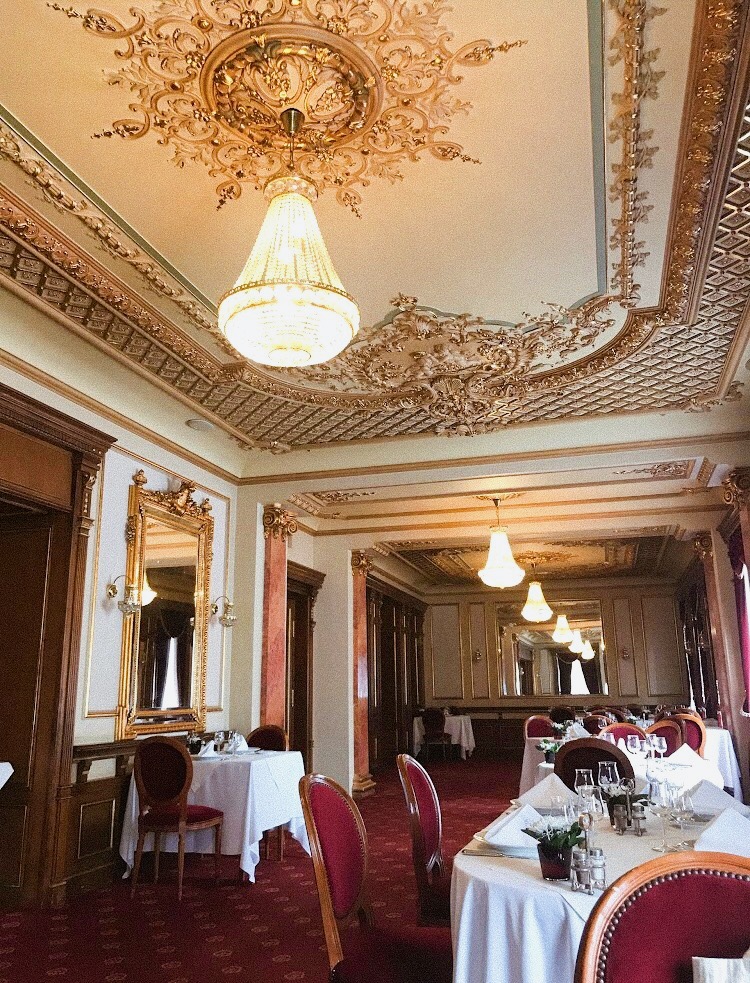 The honour of organizing and preparing the banquet could only be given to Casa Capsa. At the invitation of King Ferdinand and Queen Marie of Romania, the famous French general Joseph Jacques Césaire Joffre arrived in Bucharest. Grigore Capsa created a chocolate cake in honour of the general, which suggested the cylindrical shape of the French military cap. The Joffre cake was then slowly spread around the world.

Between the two World Wars, Casa Capsa was recognised in Bucharest as the main spot of writers and artists, the literary café. In its years of glory, Capsa welcomed all those personalities who meant a great deal in the cultural life of Bucharest. The first to arrive, at 8:00 a.m. in the morning, was the poet and mathematician Ion Barbu, a great filter coffee lover who had almost moved his work desk there.

In the hours that followed, the other regulars of the house would appear: the critic Serban Cioculescu, the poet Vlaicu Barna and Tudor Arghezi, the writers Liviu Rebreanu, Camil Petrescu, Corneliu Moldovan, Ionel Teodoreanu, the author of La Medeleni, and his famous brother, the exquisite Pastorel Teodoreanu. Later on, Zaharia Stancu and G.M. Zamfirescu would join them, as well as Ion Minulescu — one of the main figures of the literary café.

Held in the thick cigarette smoke — because the café was the only place in Casa Capsa where you could smoke, the lively discussions would move from one subject to another, from one table to the other. This was the daily atmosphere at the Capsa Café.

After 1948, when Romania became part of the Soviet Union, Capsa was taken over by the State Commercial Company, changing its name to the Bucharest Hotel & Restaurant. But still it retained its place at the heart of Bucharest cultural society.

At the beginning of the 1960s Romanian literary critic Nicolae Manolescu was a university assistant in philology when he began attending Casa Capsa: “Every significant figure of Bucharest’s cultural society was there. Prices were high; not everyone afforded a meal at Capsa. It was a world of good taste, of good manners and of the elite — the best that Bucharest could give. If you had a visitor from overseas and you wanted to impress him you would take him to Casa Capsa.” And so did Nicolae Manolescu at the first visit of the writer Umberto Eco in Romania.

After 1990 and the overthrow of the Ceaucescu regime, Casa Capsa returned to its old name, and the whole place was renovated. But no one has so far managed to restore its bohemian and serene atmosphere; the spirit that animated it seems to have vanished…along with the writers… 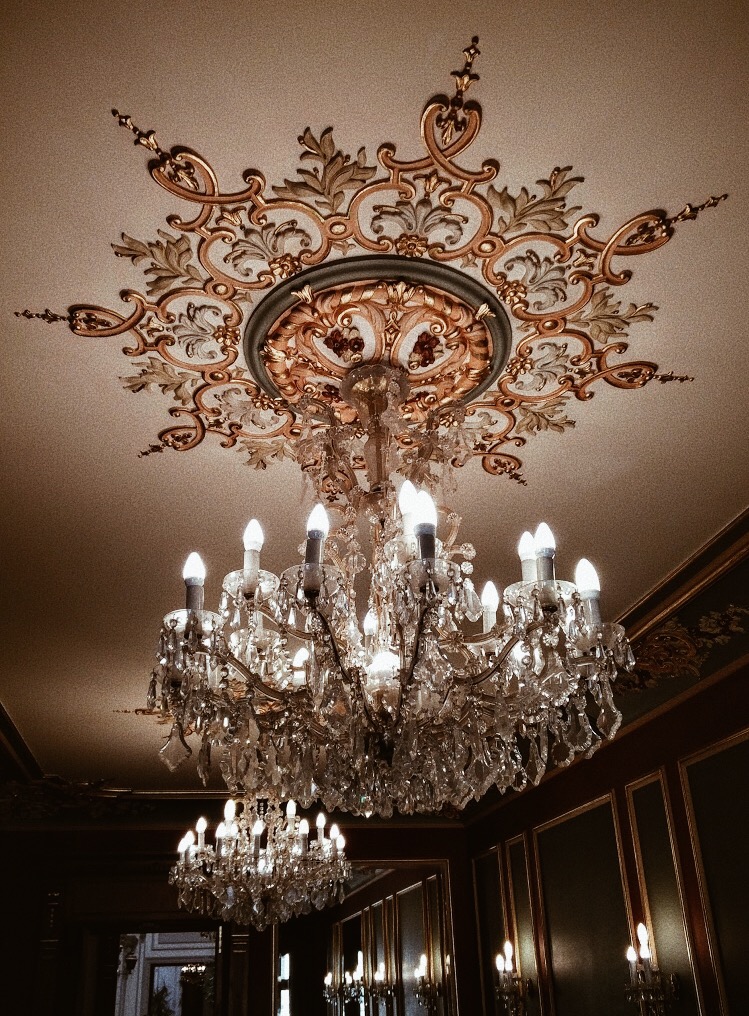 When finally I step through its doors, some of its glory is still visible. Raw walls and concrete columns that allow the symmetrical art deco to remain timeless. Chandeliers that reflect their light in a thousand facets. A lobby that has seen aristocracy, royalty and artists; the chosen spot for so many famous writers that have shaped history.

But the lobby is empty and an empty restaurant and an empty café are still standing yet rotting in their own grandness. I inspect every salon, as a tourist thirsty for knowledge, guided by the service waiter, who leads me through the imposing rooms, and finally, to Avram Marin, 56, one of the most experienced waiters of the place, who has worked here since 1978.

In the old days, if you were shaking hands with a teacher or academician you were someone, says Avram. He is a good friend of playwright and novelist Dinu Sararu, who came in when he was a director of the Small Theatre. He also remembers the actors Ovidiu Iuliu Moldovan, Gheorghe Dinică and Marin Moraru, who were regulars at the restaurant.

He served Marin Preda, Fănus Neagu, Eugen Simion and Nicolae Manolescu. Ana Aslan came often and had her favourite dishes: homemade pasta and chicken with Meuniere sauce, the waiter recalls. Marin Preda was a short man, with his huge glasses on, barely seeing anything. He always came with Jebeleanu, and both smoked cigars.

Avram tells me about the 1980s, when there were still loyal customers, besides the writers and artists of the time: “In the evening I would watch the window and when the theatre show ended, they’d appear. Before the play, one would ask for a beer and their wife would get ice cream. After the show, they’d both have roast and wine. I knew what kind of tip each one would leave”, he says. In the morning, at the café, the elders came daily: between 9.00 and 12.00 they’d have their coffee.

I look at all the other beautifully framed photos with regret and curiosity. Then enjoy a cup of tea, wishing Casa Capsa still had at least a little bit of what it once had — that bohemian charm, those interesting and fascinating people that crossed its hallways… 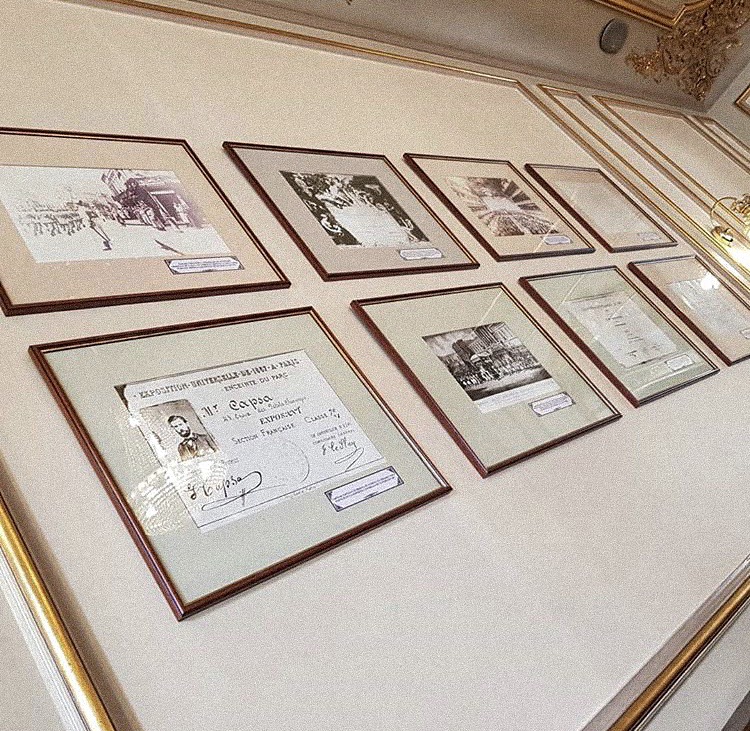 I realise that there would never be a Casa Capsa like in the old days, which hundreds of pages were written about, but the building will continue to sit at the corner on Victory Avenue, charmingly. Casa Capsa had its glorious history: in 1860 it imported absinthe for the first time in Romania, the green fairy as the French called it; in 1861 fresh pineapples, in 1863 forms for ice cream. The caring Capsa brothers wanted and managed to be the most distinguished in the capital of Romania throughout the years.

And I didn’t take anything with me from Casa Capsa, as Victor Eftimiu wrote about the guests back then: “The guests were leaving for Paris loaded with wooden boxes filled with those unique candies in all Europe … In Paris, Berlin, Budapest, Vienna I was asked so many times over the years whether Capsa still exists and whether it still has that same delicious chocolate variety…” Unfortunately, nowadays it barely has a few desserts you can choose from, not even close to what it was formerly known for across Europe.

Once born into an image of opulence, Casa Capsa is now gradually fading through time. I walk past the vases of hydrangeas and leave utterly regretful that such a place full of history is now slowly being forgotten…