The true cost of university finance

The latest statistics from the National Student Money Survey (NSMS) reveal that more students than ever are struggling financially, with 79% of students worrying about making ends meet.

The Maintenance Loan is designed to give students enough money to live on but according to the NSMS, students receive an average of £504 per month, highlighting a £267 shortfall. In addition to this, 62% of students felt that the Maintenance Loan they received was not enough.

Eleanor Dunn, a recent Criminology and Sociology graduate from the University of South Wales felt she “had no choice but to live at home during [her] first and second years of university.” Despite living in one of the UK’s lowest cost regions, with accommodation costing just £4,500 at the university’s Treforest campus, Eleanor’s loan fell short by over £1,000.

This was because The Maintenance Loan in Wales was calculated on a means-tested basis in relation to her parent’s income at the start of Eleanor’s study in 2016. It is expected that higher-earning parents will make up the difference, however, this has been described by the NSMS surveyors as “naive at best”.

The way in which finance is calculated has now changed for students from Wales with only the Welsh Government Learning Grant being means-tested, but those from England are still likely to face huge inconsistencies in the amount of finance they receive.

The effect of this becomes apparent when considering a student’s living costs. Students now spend an average of £807 a month, a £37 increase from the previous year, and the biggest price change across all categories of living was in rent costs, with an increase on average of £25 per month.

This price hike can be seen across the UK with Statisa reporting: “The average rent for a house in the United Kingdom (UK) increased in 11 of its 12 regions in February 2019.”

The Maintenance Loan currently only awards students studying in London, whose average living costs are £900 a month, with a higher amount of finance. But, as shown in the findings of the NSMS, South East England and South West England follow closely with average living costs of £833 and £809 per month respectively. 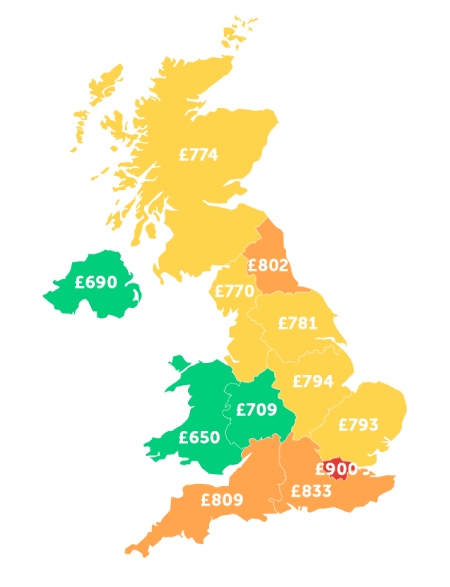 Student living costs by UK region [Save the Student]

Danielle Chick, Human Geography student at UWE in Bristol discovered first-hand the financial constraints of this. She said that whilst she feels she received a “large amount” of finance, living in one of the most expensive places in the UK meant that her loan “did not stretch as far as it could have,” and added, “it is not fairly weighed up on the grounds of location.”

This clear disparity makes it easy to understand why so many students are resorting to working around their studies. It is reported that two-thirds of students juggle a part-time job alongside their degree and half of those have said that their studies have suffered as a result.

Danielle represents just one of many students: “Sometimes I would have to leave lectures early to attend work and I also found that it was difficult to get time off that I needed for exams and coursework.” She argued: “If we didn’t have the pressures of money then maybe we as a collective would put more time and effort into our studies.”

But it’s not just the degree-work balance that students are struggling with. 57% of students said that worrying about money affected their mental health. Jake Butler, Save the Student’s money expert, commented: “This year we’ve seen a shocking jump in the number of students suffering from the stresses of rising living costs, especially surrounding mental health, socialising and academic performance.”

Kimberley Corderoy, a recent Law graduate from Swansea, said she “was hospitalised with stress twice and suffered a burn out in the first year from working too much whilst trying to manage exams.” She also found that “people who didn’t work did better at university and didn’t struggle with mental health problems. The issue is if I didn’t work, I wouldn’t have managed financially.”

Similarly, working 16+ hours a week meant that Eleanor “often felt isolated from [her] peers,” and that “it was harder for me to fit in and I lost a lot of sleep due to falling behind in university; my employer was not supportive of me at all.”

This had a snowball effect on Eleanor’s mental health and wellbeing. Her “mental health was terrible” and her “eczema worsened to the point of having to go to the doctors once a week.”

It is clear that the current financial loan system for students in the UK places far too great a burden on the students and their parents alike, with many unable to make up the difference. In addition, the large number of students stretching themselves with part-time work alongside their studies are likely at a higher risk of mental health issues or suffering grades.

Butler concluded: “Addressing the funding gap must be the highest priority for returning Universities Minister, Jo Johnson. Meanwhile, it’s more important than ever for students to be aware of the financial pressures from the outset, so they can plan and budget effectively.”