by Giampietro Vianello and Harry Myles

A grimace of displeasure crossed Danny’s face when one of his friends informed him that he was not allowed to smoke in the studio. “It’s crazy,” he uttered, then let out a big sigh and rested his blunt behind his right year.

The singer, songwriter and producer from South London had started rolling his joint shortly after entering the recording room. On our way there, he told me: “I haven’t been to this studio in ages. I was banned from it and only now they’ve decided to let me back in.” The reason for the ban? Three years ago, two friends of his went wild after taking acid and he later took the brunt of it.

The sight of the long-forbidden studio made him feel so buzzed, that for a good fifteen minutes he forgot I was there, absorbed by the music playing on his laptop and by the fat blunt that was gradually taking shape between his hands. When I finally got him to sit in front of my camera, I broke the ice by simply asking: “What are your real name and age?” 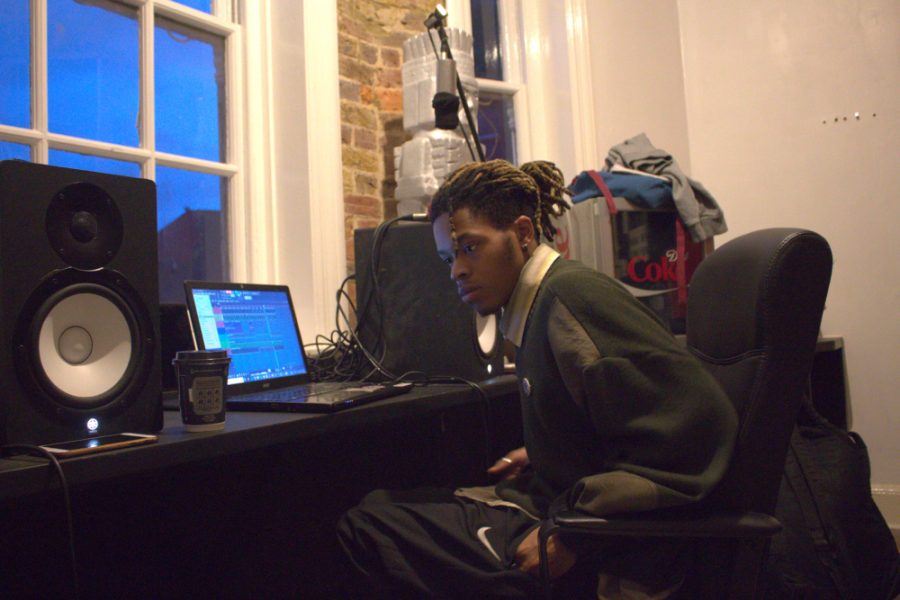 Danny playing music from his laptop prior to the start of our interview.

Although reticence about one’s personal life is fairly widespread in the music industry, very few artists are unwilling to reveal their birth names. Danny Trash wants to be counted in that small circle. “My real name is Danny Trash and I’ll be 22 years old by the time this comes out,” he replied to my first question, right before letting out a self-amusing giggle.

The artist came up with the stage name Danny Trash at the age of 16 and has run with it ever since. “I wanted something that kind of represented a dark side of things. I don’t like relegating the dark side of ourselves to this other space which we never talk about. Everything is part of a whole and you have to harness all sides of yourself.”

Embracing all facets of his personality and exploring his wildest, most twisted fantasies is something that Danny has wallowed in since the inception of his career in 2015, when he first started releasing songs on SoundCloud.

However, Danny’s fondness for song-writing largely predates his debut. He explained: “I’ve been writing lyrics for as long as I can remember.” “I grew up around music and I got into writing at a very young age,” he continued.

Although it would have been the most predictable outcome for a lyricist as precocious as him, a career in music was not Danny’s first choice; on the contrary, fresh out of high school, he chose to go to college.

Only later, thanks to the support of his parents, who he described as “the best and most loving parents a young black boy could be raised by,” would he muster up the confidence to drop out and follow his dreams. He hasn’t yet asked what they think of his latest project: “I’m sure they don’t dislike it, although I would expect that, being from a different generation, they might even cringe at some things.”

Danny, with his parents, who supported him right from his early work. [Instagram:@dannysbasement]

Danny’s first full-fledged project, Trash Jazz EP, was released in June 2016 at the end of a year-long gestation. Since then, he has put out four more projects and a profusion of singles. When I asked Danny if he considers himself as a prolific artist, he said: “Not at all. I kind of feel like I should make more music to be honest.”

He also admitted: “I go through stages. For three months I might make loads and loads of songs, like two songs a day. Then, for the following three months, I might not make anything at all. I’m literally just coming out of a period like that.”

“As a teenager, I was blown away by the idea of taking a track, chopping it up and creating something else out of it.”

Regardless of what stage he might be going through, Danny aims to listen to “as much and as wide a range of music as possible” on a daily basis. Doing that helps him greatly in his efforts as a producer.

Danny’s interest in record production emerged sometime during his high-school years and was ignited by the work of Tyler the Creator, former leader of hip hop collective Odd Future and currently one of the most influential artists in the international music scene. “I started off by sampling songs. As a teenager, I was blown away by the idea of taking a track, chopping it up and creating something else out of it, so I did that for quite a while.”

Over time though, Danny sensed the need to become more hands-on, more actively involved in the production process. He told me: “I wanted to be more holistic in my approach to music and, in a way, I wanted to be more tangible within the music I produced.”

On the back of that, he bought his first guitar and started utilising his voice as an instrument, something that he shares with world-class producers like Kanye West and Frank Ocean.

Thus far, Danny has composed, produced and arranged all of his projects and has also occasionally produced tracks for artists such as Keyah Blu, Bandanna Clips and Sam Wise. The latter, member of the popular UK rap collective House of Pharaohs, is featured in Cherry B, the last track off Danny’s latest release, Danielstonerocks EP.

“Personally, I’ve never cared about my stories being 100 per cent true”

When asked about where the inspiration for the title of the project came from, Danny explained: “On the journey from Brixton to Streatham there’s one particular bus stop, on the top of which somebody spray-painted Daniel Stone Rocks. Going past that, I always used to wonder who Daniel Stone Rocks was and what events had driven someone to spray-paint his name on top of a bus stop. Those questions stuck in my head for ages, so I thought I should call the EP Danielstonerocks.”

The project, released on August 30, is a short anthology of titillating tales whose protagonist cannot help but indulge in the narration of steamy sexual encounters and inebriated all-nighters. To those who listen to it, Danielstonerocks feels like staggering drunkenly across a dimly lit parlour crowded with underdressed women.

Whether the stories recounted in Danielstonerocks are a faithful account of Danny’s personal experiences or just fervid fantasies fabricated by his own imagination, we might never know. “That’s the fun thing about art: you can do anything you want to,” Danny said. 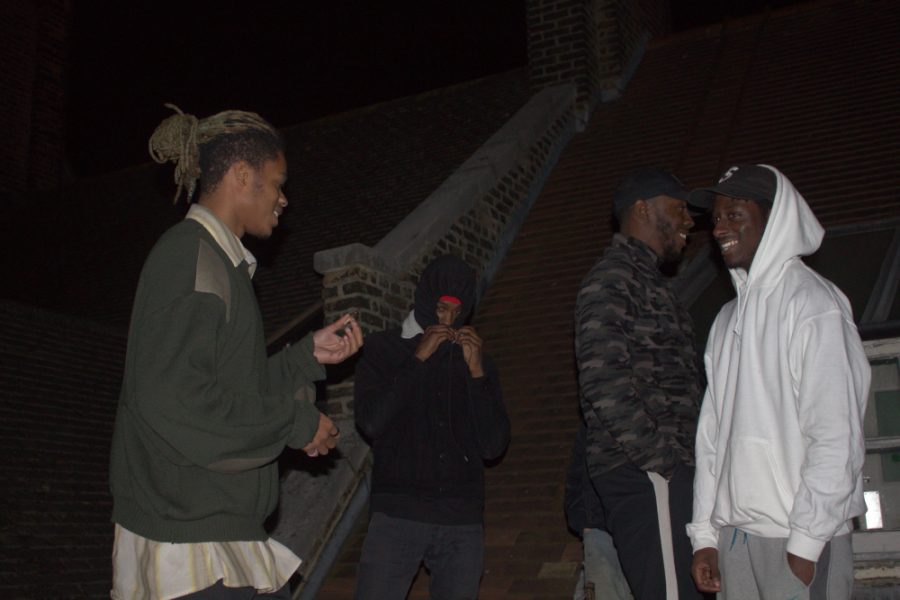 Danny smoking a blunt while having a chinwag with the “mandem” on the rooftop of his South Bromley studio.

Discussing the creative process that led up to the creation of Danielstonerocks, Danny said: “For this project, I didn’t record my guitar or my piano directly in. Everything went through an amp (amplifier, ed.), then the amp got mic’d up and finally those sounds were turned into something. There would literally be eight-hour sessions of me just playing or singing, running sounds through the amp, taking those sounds, processing them through my laptop and then sampling them.”

The ultimate outcome of such a process was the creation of a sound that currently has very few equals in the UK music scene. In particular, Danielstonerocks epitomises the final evolutionary stage of a style that eludes all attempts at categorisation by diluting jazz-infused alternative hip hop with sonic tinges reminiscent of electronic and trap music.

When confronted with the idea that his off-centre sound might actually keep him from receiving due recognition within UK hip hop, Danny said: “Well, that is only a problem if you want to be a part of UK hip hop. The thing is that I don’t really want to be a part of it. […] To be completely honest, I’m more likely to align myself with underground jazz artists like Oscar Jerome, Shabaka Hutchins or Kamaal Williams, even though those guys are a bit more the virtuoso type.”

Unwavering in his belief that his music does not belong in hip hop, for the time being Danny chooses not to worry too much about numbers and streams, and prefers to keep grinding away at promoting his music: “Whenever I’m not making music, I’m just sending loads of e-mails back and forth or I’m putting together events, which I have been doing for the past two years now.”

Having a busy schedule is something that Danny is not weighed down by. However, one particular thing seems to irk him slightly: “I don’t actually get a lot of time to watch anime, not anymore.” “When I was young, I used to rinse that out, man,” he said with a chuckle.

Text and captions by Giampietro Vianello. All images and videos by Harry Myles.