There is no national figure that tells us exactly how many people are homeless in the UK. However, according to Government statistics, an estimated 4,677 slept rough across England on any given night in 2018 with 1,283 of those residing in London, a 12.8% increase in the capital on the previous year.

Crisis, one of the UK’s leading homelessness charities, have suggested that Government figures only give a “snapshot of the national situation” and that as many as 8,000 people are sleeping rough at any given time.

The disparity between figures becomes apparent when you consider that homelessness is measured differently in different regions and the way in which such statistics are collated means that many people do not show up at all.

“It’s an act of solidarity – to give you a tiny insight into this reality, and to raise the funds and awareness needed to help people who have no other choice.”

Not all those who are homeless end up sleeping rough. In the first quarter of 2018, it was estimated that more than 80,000 were living in some sort of temporary accommodation including B&B’s, hostels and local authority or social housing.

Whilst many of these people have a roof over their head and may not be considered homeless by many, they too have no permanent form of residence.

To be legally defined as homeless, you must either lack a secure place in which you are entitled to live or not reasonably be able to stay. Perhaps the biggest constraint of this is that many people in situations of homelessness are ‘hidden’ from official statistics.

According to research conducted by Crisis, up to 62% of single, homeless people may be hidden from official statistics because “they are dealing with their situation informally.” The term ‘hidden’ refers to those who find a means of staying off the streets by staying with family and friends, sofa surfing or living in unsuitable housing such as squats and ‘beds in sheds’ situations.

Homelessness affects people in every region across the world. The United Nations Human Settlement Programme estimates that 1.1 billion people live in inadequate housing and that more than 100 million people have no housing at all.

Homelessness occurs for a number of reasons but the imbalance between supply and demand, overwhelming costs and the issues of poor quality housing are all at the forefront. Unlike other issues related to poverty and health, there has been no coordinated global response to tackle homelessness. But one man and his team are striving to change this. 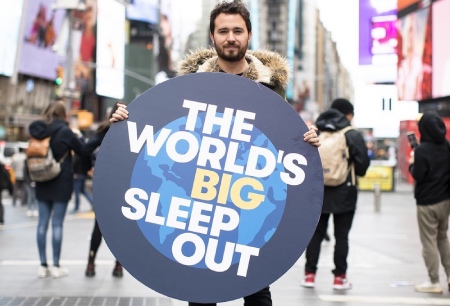 Josh Littlejohn MBE, co-founder of Scotland-based charity Social Bite, started this endeavour back in 2012. Starting with a small sandwich shop in Edinburgh, Social Bite offered free food and employment to the homeless. The enterprise quickly grew into a major charity and hosted visits from a number of A-List actors including George Clooney and Leonardo Di Caprio.

Social Bite has since built a bespoke village for people struggling with homelessness and developed a Housing First programme which has helped 830 people out of homelessness. In 2017, Social Bite hosted the world’s largest-ever Sleep Out in Edinburgh called Sleep in the Park. Over the years, this campaign has raised almost £8 million to help tackle homelessness in Scotland.

Now Josh thinks it is time to take on the world.

Run in partnership with The Institute of Global Homelessness, Unicef USA, Malala Fund and Social Bite, it is expected that at least 50,000 people will take part in The World’s Big Sleep Out on Saturday, December 7, 2019. The event aims to “create the world’s largest display of solidarity with and support of those experiencing homelessness and displacement.”

“It’s an act of solidarity, to give you a tiny insight into this reality, and to raise the funds and awareness needed to help people who have no other choice.”

The cost of the event is completely covered thanks to the support of corporate sponsors and other donors. As a result, 100% of the funds raised* will be invested in the plight to tackle homelessness worldwide.

Half of the money will go towards helping the charities and those who are homeless in the towns and cities of those taking part and the other half will go to charities globally who help those who have lost their homes due to war, natural disaster or extreme poverty.

In London, the event will be taking place at two venues: Trafalgar Square and The Kia Oval. On-stage performances will include a bed-time story read by Dame Helen Mirren and acoustic sets from Scottish rock band Travis and singer-songwriter Tom Walker. Local charity beneficiaries include ThamesReach, DePaul, Connection at St Martin-in-the-Fields, Homeless Link and The Big Issue Foundation.

In a statement, Josh said: “As well as raising money and investing in charities that make a difference, we want to send a message to the world’s political leaders to enact compassionate policy and find solutions for homelessness locally and the global refugee crisis that affects us all.

“We are a small, interconnected world. By collectively sacrificing our beds for one cold night we can reach out a hand of compassion and solidarity with those who need it most – homeless people on our doorsteps and refugees internationally. Over 50,000 people sleeping out on a December night is a mandate for action. Please join the movement today.”

To host your own sleep out or to join one of the events already taking place worldwide, visit https://www.bigsleepout.com.