It has been said that jazz music is making a miraculous comeback with many news outlets like The Guardian even going as far as calling it ‘the great jazz renaissance’. And perhaps this is true, it has definitely become a more popular genre and has gained interest from many people, especially the younger generation.

In recent years, there has been a growth of frequent listeners. Spotify recorded that since 2016, the number of jazz listeners has increased by approximately 4%. They also noted that 40% of jazz is being listened to by people under the age of 30.

When opening up the discussion with some jazz fanatics, I was surprised to hear that some people believe jazz music doesn’t have to make a ‘comeback’ because it has always been in everything we listen to. It is a genre that has influenced many mainstream genres, from hip-hop to pop, certain musical elements originate back to jazz music itself.

Since the genre emerged in the 1920s, it has developed through many different sounds. It started being played by African American’s in New Orleans and was known to have created a sense of vibrancy amongst communities after the end of the first World War.

It was seen as a new, unique and exciting time for music however this soon fizzled out when other genres were introduced like rock and roll and later, pop music. Jazz music was soon to be considered a niche.

However, this has all changed. Jazz is being listened to again and people cannot get enough. Spotify caters to fans by showcasing many playlists dedicated to the genre.

One of their most popular playlists titled ‘Coffee table jazz’ has two million followers and contains songs by classic stars such as Miles Davis and Eric Reed, whilst another playlist called ‘Jazz UK’ features artists you wouldn’t normally associate with the genre such as Loyle Carner and IAMDDB.

Kai Craig, a 20-year-old jazz student at The Royal Academy of Music has been interested in the genre since his early teens: “I was influenced by my dad as he is a jazz drummer, it’s all I would hear around the house growing up. It wasn’t until my early teens when I decided I wanted to learn to play. Looking back the thing that attracts me now must be what attracted me then which is the improvisation, it’s so free.”

Kai has more than 13,000 followers on Instagram, you can find him posting inspiring photographs, short videos of him performing the drums freestyle or covering some of his favourite songs. He plays a variety of genres, especially chart music which he tells me gets the most views but his favourite to play is, of course, jazz. 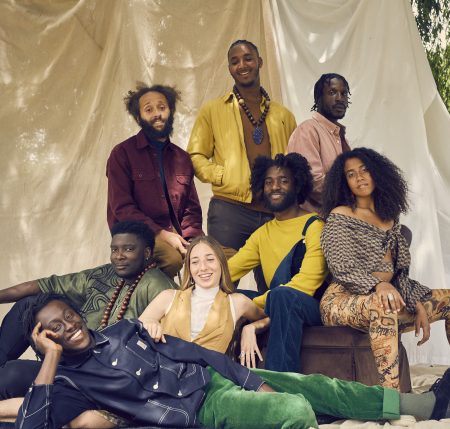 Group shot of Steam Down members [Sylvia Suli/Steam Down]

So what does Kai think about the term ‘comeback’ and its association with jazz? “I think if comeback is referring to people going to watch jazz performances more, then definitely. It’s more listened to and researched now than ever before because of the internet, people have more freedom to explore.

“Due to that more young people are wanting to study it which probably leads to popularity because they’re introducing more people to the genre.”

Kai talked through some of his favourite artists who use jazz as an influence in their music. He mentioned Kendrick Lamar’s Grammy-award winning album To Pimp a Butterfly, which was produced by a variety of jazz musicians.

These include Terrace Martin, a saxophonist who played on many tracks on Lamar’s album, while also helping to write the song For Free? Ronald Bruner Jr, a famous drummer, also played on a couple of tracks on the album as well as saxophonist Kamasi Washington and pianist Robert Glasper. “All the chords, all the beats. The reason that album is so advanced is because it is jazz,” Kai added.

When thinking of an artist like Kendrick Lamar, jazz music is probably the last genre that comes to mind when acknowledging the influence it has had on his music. Unless you’re a fan yourself and know to look out for its distinctive style of melodies and rhythms it can easily go unrecognised and unappreciated.

But Kendrick Lamar is not the only musician who has merged it into his style of music. Jorja Smith is an artist who has incorporated jazz into her career since she won the attention of the industry back in 2016. Smith’s music focuses around the genres of R&B and pop but certain melodies have a similar loose flow and spontaneity which are commonly found in jazz.

Back in a 2018 music review, The Telegraph named Smith “the poster girl for the rebirth of jazz” and they seem to be right. She has worked closely with the jazz group Ezra Collective when they teamed together to create the song Reasons in Disguise. The drummer of the group, Femi, is Smith’s live drummer and accompanies her on tour.

Another group of artists making a stance in the jazz world are the artist collective Steam Down, a weekly event and music community based in Deptford, London. They have become quite popular amongst the London music scene since starting out in 2017.

They have won two JazzFM awards, sold out their first headline show at the Jazz Cafe in Camden, performed on Glastonbury’s park stage and have gained a following of 13,000 on Instagram (which only seems to be growing more). It was founded by multi-instrumentalist, composer and producer Ahnansé, in hope to create a space for London-based musicians and producers to connect.

Every Wednesday events take place at the Matchstick Piehouse which bring together the Steam Down artists and their extended musical family. Together they create spontaneous sonic soundscapes about their experience of living in the city.

The group is combined of six core members as well as other esteemed musicians and producers in the UK which come along and join in. Ahnansé, told us where his idea for Steam Down stemmed from: “I always thought musicians don’t have a place to connect with each other when they’re on tour, so I wanted to create a place where everyone can connect but I wanted a band to be at the centre of that.

“The weekly night is a good place to keep the band together and keep your creative juices flowing, and build your musical chemistry with other musicians.”

He also touches on the main way that jazz has influenced them when creating music together: “Having a space where you can kind of freely create, not having a blueprint or a plan and just working out as you go along based on the bits of musical language that you know and then sharing that with other musicians.”

Ahnansé made it clear that he didn’t think that jazz music is in everything we listen to and that it has only had “partial influence” to what we listen to today. “Musically I wouldn’t say it’s a comeback, I would say it’s a development or growth from before.”

Even though it’s clear that lots of genres have had some influence from jazz, we cannot say exactly that it is in everything we listen to. One thing we can say though is that there is one element of the genre which attracts such a large audience and it’s this same element which distinguishes jazz music from all the rest.

It’s the improvisation that has made it so desirable all this time. That is not just amongst the musicians who enjoy playing freely and experimenting with different styles, but also for the audience, who enjoy not quite knowing what sounds they are going to be hearing next.

Adding an element of surprise to anything in life, especially music, is exactly the correct way of gripping an audience and it seems to be working wonders.