The Victoria and Albert museum have honoured the work of the phenomenal designer Mary Quant, a fashion icon who shaped the fsahion industry into what it is today.

Amongst all of her triumphs here is a dive into the past to relive the era which she helped flourish into something way more than the clothing she created.

Spread across two floors, it represents Quant’s exquisite eye for design which was embraced by many, it was considered ‘wacky’ and especially unique when it first emerged in the late 1950s post-war Britain. This was a time where women were mostly seen to look good for their husbands and for others, certainly not themselves.

Throughout the exhibition, archives of her iconic designs are on display as well as the story behind her garments, visitors can experience the thought process that went into the making and reasoning of her clothing.

The V&A’s show co-curator Jenny Lister told The Guardian; “We had more than a thousand emails from women [about donating or loaning their Quant items for the exhibition]. Some got in touch with us from as far afield as San Francisco and Australia.” 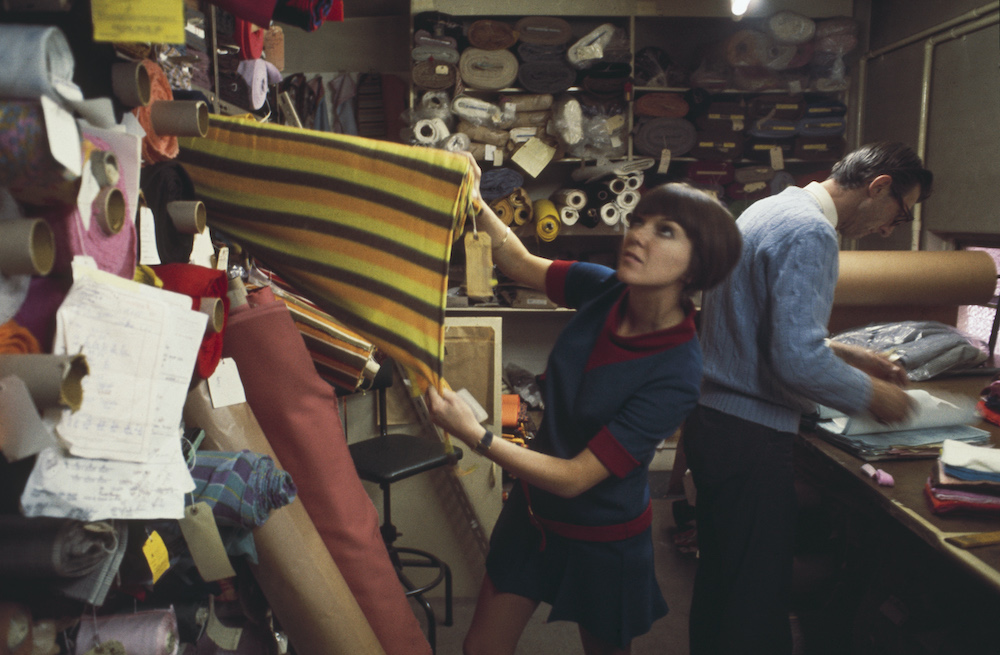 The museum has described Quant as “launching a fashion revolution on the British high-street” in which she produced clothing that was easily accessible to women, especially in London.

They weren’t exactly considered cheap, you had to have some money to be sporting her looks, as noticed by The Guardian the classic pinafore dress was six guineas, the equivalent to just over £100 today.

However, she did challenge the traditional dress codes by introducing designs that “one, you get noticed in, two, that you feel sexy in, and three, that make you feel good,” and that is something she stuck by when creating all of her clothing.

On the walls of the exhibition a projection is showcased of quotes of women who have loved her work, the famous British journalist, Min Hogg said; “She was the bee’s knees. There wasn’t a single person doing what she was doing.”

Quant made quite the impression by using materials which were not considered the ‘norm’, she loved the use of jersey and wool to create outfits that could be worn from day to night.

Her fashion was known to question gender roles as she started to use tailoring cloth in her work. She created women’s trousers (which were heavily frowned upon to wear in any formal occasions), she also incorporated sportswear; she designed V-neck sweaters similar to the men’s traditional cricket style.

Quant’s cosmetic line followed her monochromatic aesthetic, with her iconic trademark daisy it made sure to catch people’s eyes [V&A]

Her clothes screamed individuality, she experimented with different styles and shapes no one had ever seen before. She wanted people to shine in her clothing, she wanted women to have fun and relish in the freedom and energy that came with wearing them.

The opening of her shop ‘Bazaar’ made quite an impact on the women around London, especially when the second store opened on Kings Road which was considered the hub for trendy shoppers.

Quant would make sure to spend time redesigning the window displays, having the mannequins posing in awkward quirky positions is what she knew would draw the attention of people to the shop.

And she was right. It was the place women would go to shop for “streamlined, modern fashion” and it was seen as tremendously accepted by fashion’s elites.

It didn’t take long for Mary Quant’s clothing to be recognised internationally, it was being showcased in fashion magazines such as Harpers Bazaar and Vogue, major models like Twiggy were seen modelling her looks; the best fashion editors at the time were excited to see what she did next.

Thousands of Quant’s products were mass manufactured and exported around the world, this was a big change for the fashion industry. The Guardian described how Quant “believed in fashion for the masses, from 1962 her clothes were produced in democratic multiples of 1,000.”

She soon signed a deal with the major US retailer JC Penney and created her line “ginger” which consisted of party dresses and pinafores. This led onto a second deal with clothing corporation Puritan Fashions – both collaborations helped gain the attention of many Americans whether they were teens or middle-aged women.

Mary Quant’s designs went onto much more than the clothing itself, she created a worldwide business. Once she trademarked her iconic daisy logo she was able to use that on her designs, in the late sixties she went onto using it for the branding of her cosmetics line.

From make-up to perfume and nail polish, in an era where women were plastering their faces with more make-up Quant wanted to create a ‘no make-up’ make-up line – very similar to what many brands want to achieve today, for example, Glossier. 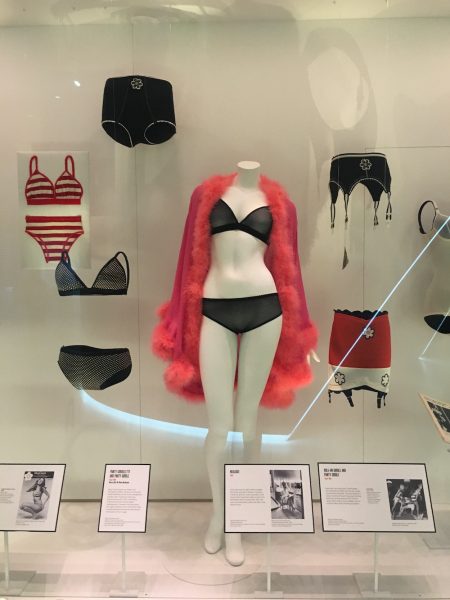 Quant not only designed comfortable underwear, she made sure it was seamless so it didn’t show underneath her clothing [Holly Johns]

In similar years she also released her own lingerie line suitable to be worn under her distinctive silhouettes, she didn’t want corsets with metal boning and clasps she wanted comfort so she created them by using lycra.

Later in 1973, she released the Daisy Doll, a collectable which wore miniature versions of her designs, these were strategically placed around the exhibition next to the life-size mannequins. At the time they were cheaper to purchase than the popular Sindy Doll as recognised by the V&A, they were available on the high street starting from as little as 30 pence (equivalent to around £2.30 today).

While visiting the exhibition I found myself talking to another visitor; Gillian, 69, was there with her daughter, showing her what she loved so much about Quant back in the day. “Everyone that knew fashion and wanted to dress well would be wanting to wear Mary Quant back then.

“It wasn’t until I was in my early twenties that I became aware of her clothes but I remember my mother wanting one of her jersey dresses so badly. She finally did save up and buy one which she later gave me as a hand-me-down. Even though it didn’t quite fit me the way it fit my mother I would still find any excuse to wear it, it was so easy, comfortable and it made me feel great. Looking back maybe that was just because I knew that I was wearing a Mary Quant design,” she laughs.

In a period where women were struggling for recognition and  rights, Mary Quant stepped up and gave them exactly what they needed. Her passion for the way clothing could fully transform how a woman feels had a tremendous impact on the confidence of many women around the world, it helped create a wave of female empowerment. She wanted them to feel sexy, she wanted them to have the freedom to wear whatever they felt best in and she sure did deliver.

Even the Queen had her to thank for the wonderful contribution she had made to the fashion world as she was awarded an OBE in 1966, if that doesn’t speak volumes about the tremendous change Quant created then I don’t know what will.

Tickets for the Mary Quant exhibition are available on the V&A website.

'As soon as I put the clothes on, it's showtime'

By Wiktor Karkocha
3 Mins read
It is James Indigo’s world and we are just living in it. From performing at Birmingham Pride this September to rediscovering his love of dressing up, he takes time to reflect on 2021.
Lifestyle

By Molly Douglas-Fairbrass
5 Mins read
A controversial sub-culture in the past and ever-changing present, we find out how skinheads are enduring and adapting.
Fashion

Oh thanks, it's vintage.

By Natalia Faisal
7 Mins read
We meet veteran make-up artist Mariella Smith-Masters, who gives us the inside track on her competitive world.