How a start-up clothing brand made it big

Online businesses have been on the rise for years, the ease of being able to order items straight to your door and having more variety is the appealing aspect. Many people have jumped on the e-commerce wave, as it is accessible to anyone, and in many cases there is a wider audience.

Shopping online is by no means a new invention, but it skyrocketed even further during lockdown because the High Street shops were shut. The UK spent an estimated £2.5bn a week in June, £943.5m higher than it did in February, according to figures from the Office for National Statistics.

There are advantages for entrepreneurs as well, as online businesses can be created on someone’s computer and the initial overheads are low.

Minky London was created by Megan Hickling, 23, in June 2020. The official launch day was June 26th and Minky London has had a successful start for a business that’s only five months old.

Megan, like many other business start ups during Covid-19, always wanted to create her own brand and with lockdown hitting she decided to use the time wisely.

The inspiration behind Minky London was quite simple, Megan had always wanted to be in the creative side of fashion and wanted something that was her own. Megan studied fashion buying at Fashion Retail Academy in London, and works as a full time buyer for the New Look Footwear team.

“Although I’m a buyer for New Look and I enjoy my job, I’ve always wanted to design and create my own clothes and manage the design process from scratch. As my current job I generally just pick out things, it’s not made exclusively by me.”

[pullquote align=”right”]Megan wants to “continue to build the brand, grow my audience and continue to design new clothing.”[/pullquote]After being furloughed at work because of lockdown, this gave Megan enough spare time to create something that was her own and this was when Minky London was born. From March to June Megan learned how to create her own brand by setting up a website, creating and designing branding that was unique to her and sketching clothing ideas.

Megan started to create dresses for going out at an affordable price which were still at a high quality, the designs she sought were classic and simplistic whilst still being effective.

She found a lot of going out attire is very trend focused and wanted something more understated, this was Megan’s unique selling point for her brand: “My initial idea was to create clothes that I wanted to wear, I had an image of dresses I wanted to wear but I couldn’t find them anywhere. So I created my own.”

All of Megan’s products were created exclusively by her, from drawing sketches of each design to handpicking the fabrics to give the customer the best possible quality.

The factory that Megan selected to make the clothing is in China, as being sustainable is a big topic in the clothing industry, Megan made sure it was ethical first: “The factory in China is not a big one, it’s relatively small so everyone working there is paid well and treated fairly. They endeavour to recycle clothing from bulk to ensure no fabric is wasted. But it is a fair trade clothing company so it is pretty ethical.”

When the items were delivered to Megan’s house, the launch day was fast approaching. On the Instagram page there was a countdown until the products were released which allowed consumers to be ready. 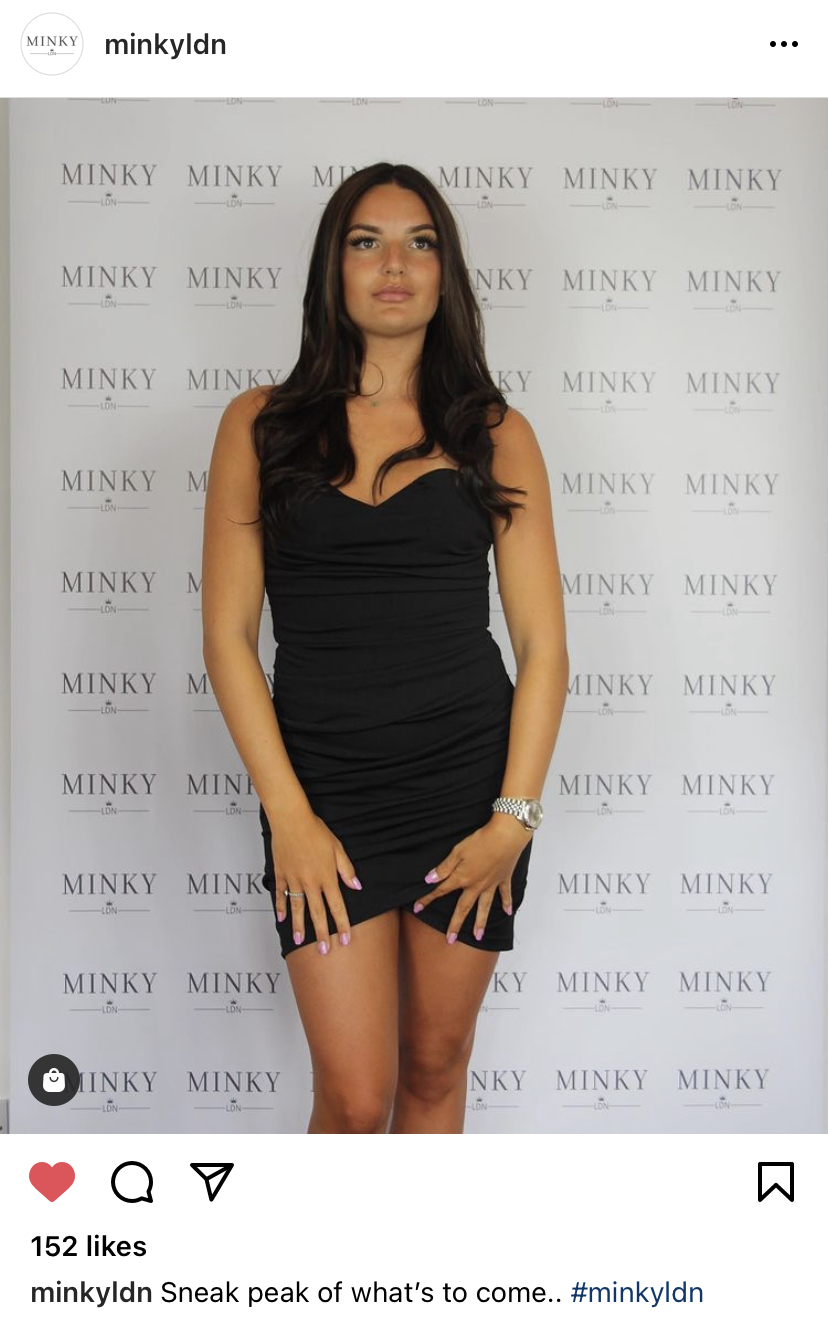 When the brand launched the items started to sell quickly, after the launch, there were 41 orders from June to July and Megan made more than £1,000. She began to restock the same dresses in a variety of colours. By using promotional codes, Megan attracted more attention, after a consumer has brought an item they can tag her Instagram handle and they will receive 20% off any item on the website.

Since the launch, Minky London has already attracted attention from other buyers after having success with customers. Silk Fred, an established online retailer which sells clothing from independent brands, approached Megan in August to be a featured brand on their site. Silk Fred has close to 500,000 followers on their Instagram account, which means Minky London would be seen by a much wider clientele. They are also featured in a boutique called Just Cheek in Megan’s hometown Leigh-On-Sea, so after showing them the clothing herself and the owner were highly impressed with the branding and quality.

The customers and buyers were attracted to the branding of Minky London, as it is effective in its own way. The name is catchy and fun, which is memorable for the audience and the name was inspired by Megan’s nickname when she was younger, which adds a personal touch. The logo is bold with a simple colour scheme of black and white, this has a memorable and professional feel.

As the brand is designed entirely by Megan there is a sense of exclusivity to it, this is her unique selling point as they can only buy the clothes from the website, Silk Fred or Just Cheek.

As Minky London is doing so well, Megan outlined to me the new goals she has in mind for her business. Firstly being a new warehouse: ‘When a brand is made in China people aren’t as keen due to the underlying unethical problems which aren’t a problem in my case, so I’m looking for a warehouse in the UK as this will give a further unique selling point for my brand. I also want to continue to build the brand, grow my audience and continue to design new clothing.”

Although e-commerce is continually growing, this means more retail shops may go into decline as this used to be the typical way to open clothing stores. However, people like Megan are now opting for the online route: “I decided to go against the route of a shop as I have another job so as it is a new venture I didn’t want to commit fully.”

Even before the Covid-19 outbreak physical shops were declining, statistics show that in 2019 have shown the High Street has been left with the highest number of empty outlets in five years after 25,700 shops closed their doors in the past year, according to Local Data Company’s review of 3,000 retail centres.

The online clothing market is only getting bigger, with stores becoming successful so quickly. It will be interesting to see what this develops into.

Online Vs Reality: The Illusion of E-Commerce

By Elyse O'Donnell
5 Mins read
E-commerce may be on the uprise but Artefact investigates how it still has a long way to go from being the perfect necessity.
Technology

By Edena Klimenti
7 Mins read
Social media is giving passionate creatives the opportunity to advertise and make money off of their work.