It’s 2021, and although the gender gap seems to be shrinking (it still very much exists) and issues regarding sexism are being spoken about; could it be that some deep-rooted, old-fashioned ways of thinking are still prevalent and embedded in society?

How much do these reflect the way women are perceived in the business world, thus discouraging them to pursue some roles and trades?

Why is it, that some occupations are still regarded to be only for men? Studies prove that women are still less likely to obtain a leader’s position or start up a business of their own.

Some jobs – often referred to as care occupations – are heavily female-dominated, which probably won’t come as a surprise. However, women are seen less is the business world, with the situation getting worse the higher the position.

This underrepresentation of women tends to be the highest in fields such as finance and politics, or in disciplines within science, technology, engineering and mathematics (STEM).

A recent British Vogue interview with space journalist and TV presenter Sarah Cruddas sheds light on how women in STEM are seen: Cruddas has often had her career choices questioned as its mainly perceived to be a male dominated occupation.

“I was lucky no one ever told me I couldn’t do something, but I guess a lot of girls are put off STEM subjects because society tells them it’s just for boys,” Cruddas told the magazine. 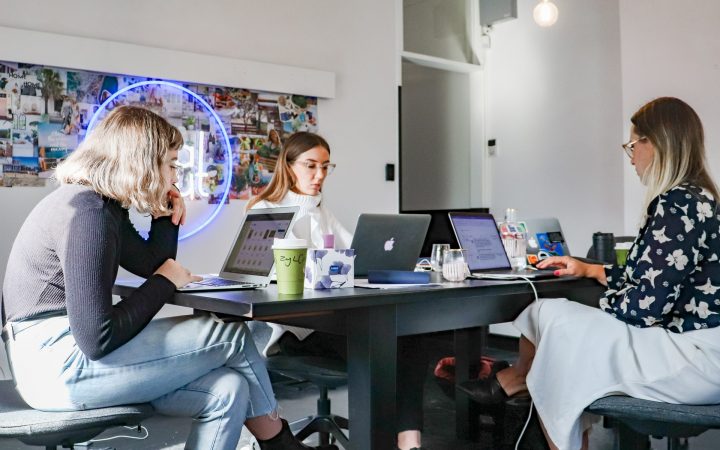 To achieve a change, encouragement to pursue different roles and business avenues from a young age would be necessary [Unsplash: Social Cut]

Another British Vogue article delves into this issue further with an interview with Cecilia Harvey, founder of Tech Women Today and CEO of Hyve Dynamics.

Harvey opens up about her career path that is heavily ruled by men, not because women don’t want to work in these fields but rather because women are not prepared for these jobs.

“I think there’s a lack of information for tech as a career. Women aren’t really considering tech careers because they’re not given enough information about working in the sector from when they’re in school – but it’s suggested to many men that they should have a career in technology,” Harvey explained to British Vogue.

It seems that not only are some specific professions automatically considered as unsuitable for women, but also certain positions within a company appear to be out of reach for a woman – these positions being the highest, also known as C-suites or “chief-jobs”.

A study conducted by Wall Street Journal investigated why it is still so rare that a chief executive position is obtained by a woman. According to this study, women are less likely to be promoted to positions that act as a stepping stone for becoming a CEO.

Instead, women are mainly found attaining positions in marketing or human resources, sectors that are not typically part of the path for becoming the head of a company.

According to the Wall Street Journal, this happens because men are encouraged more to pursue the roles that will lead to CEO, while women are not provided the same support or leadership training.

Can this be linked to the common conception that women are perceived as more suitable for jobs that require social-emotional skills, and that stereotypical female traits don’t make a great leader?

Jane Stevenson, vice chairwoman of board and CEO services at executive-recruitment firm Korn Ferry put it well in her interview with Wall Street Journal. She also talked about training differences between men and women regarding key operations or production roles: “Women get trained around people; men get trained around the guts of the business.”

[pullquote align=”right”]“I’ve noticed that a potential client did not take me and my work seriously.”[/pullquote]And what about upbringing? Can it have an effect on how and where women choose to work when they start their career path?

Lucy Higgins is a Royal Holloway class of 2019 BSc Economics graduate, she thinks that although she grew up in the 90s, she received a very conservative upbringing that some of the girls from her friendship circle experienced too.

“My whole childhood as a little girl, my parents raised me with the assumption that I will meet a man who will take care of me, as long as I’ll do my duties as a wife. I was taught how to cook, how to sew, cook and do the laundry; my mother also made sure I knew how to do my hair and make-up nicely in order to look pretty.

“The only job I was allowed to have in my late teens was modelling and when I told my parents that I wanted to go to university and get a degree, my parents laughed and told me that I wouldn’t be needing one. According to them, I was going to marry a man who will have one, and a job that will provide for the whole family.”

This may sound old-fashioned, but Higgins, who now works in finance, believes that it had a strong influence while she was growing up and becoming a young woman, questioning whether she was capable for certain jobs and positions.

“I am aware that my upbringing was probably outdated and strange for the 90s, but I bet there are still parents who treat their children differently when it comes to their gender and encourage them to pursue the career paths that society thinks are suitable for a girl or a boy. As I’ve experienced this myself, I know this can have a very restraining effect,” Higgins explained.

In 2021, female entrepreneurs are still a minority, and this is not because of women’s lack of interest in starting up a business. Research published by University of California states that sexism is still alive; they found that an unconscious gender bias towards women exists, showing as lack of encouragement from friends to a lack of funding from investors.

“After doing freelance work for a few years, I decided to start my own company when I was 21 years-old. It took a while to build a client base, and I do think that the fact that I was a young woman played a significant part in it,” said Mira Hakomäki, the founder and CEO of Mira Hakomäki Creative, a Helsinki-based company that offers services in digital marketing, event production, photography, social media and communications.

“I’ve been in situations where a potential client has not explicitly told me that my gender is a factor in their consideration, but if the deal fell through I wouldn’t have been surprised to find out that the client chose a young male entrepreneur instead of me.”

[pullquote align=”right”]“Women should not change who they are, the society needs to change.”[/pullquote]”A few times I’ve noticed that a potential client did not take me and my work seriously, and this would only happen with older, male clients. I’ve also noticed that when a client is after for example my event production skills, they are keen to get me on board and they trust my expertise.

“However, when it comes to stuff like coding and building websites, which I’m also really good at, clients are more hesitant. I think this has a lot to do with the fact that this work is technology-related and they don’t think a young woman like me is able to do it successfully,” Hakomäki told us.

Feminist and a University College London class of 2020 BSc Psychology graduate Agathe Nguyen agrees that although women’s position in the society has improved, gender discrimination still exists in all parts of the world.

“Everyone must be aware that a gender pay gap is still a thing. Everyone must also remember that there are still countries in the world where it’s unacceptable for women to work. So it is obvious that women are still not equal to men, and a lot of work has to be done to improve this. It is crazy that women have had to fight for so many of the rights that men enjoy, and they are still seen as ‘less than’.

“What also baffles me is, that how in such advanced, westernised countries, women are still looked down upon in the business world, as if women couldn’t do the same as men can. This is incredibly discouraging and it is no surprise that fewer women start their own businesses and work their way to the top positions,” Nguyen said.

And when women do work their way up or start a company of their own, there are specific terms for these successful women.

“The term ‘girl boss’ literally makes my blood boil, it’s just so patronising. As if a male leader is different to a female one? Also the word ‘girl’ massively infantilises the phrase. Another really bad example of this is the term ‘she-EO’, which just sums up the fact how badly underrepresented women are in the business world and this needs to change,” Nguyen said.

“I know some women use these terms to describe themselves but it needs to stop as they are belittling and sexist. Ask yourself: Why aren’t there such terms invented for men?”

Nguyen makes a valid point – why would it be necessary to add ‘girl’ or ‘she’ to a word used to describe a woman leader, when all it seems to do is highlight the fact that there aren’t many female C-suite occupants?

Research says that both in hiring and promoting processes, female applicants who obtain more personality traits that are considered stereotypically male are more likely to land the position. Should women start acting like men to achieve success in the business world?

[pullquote align=”right”]“Women get trained around people; men get trained around the guts of the business.”[/pullquote]”Women are stereotypically considered as soft, emotional and caring. According to what the society thinks, these are not good traits for a leader, hence women will be ruled out of consideration for a promotion or a chief executive position. Women should not change who they are, the society needs to change,” Nguyen said.

So, how can the society improve the representation of women in the corporate world and encourage them to start businesses or to aim for the top positions?

“Positive role models and more celebration of successful, trailblazing women – because there are many out there,” Hakomäki said.

Higgins agreed: “I wish my parents had brought me up highlighting how important it is for a woman to create a career path of their own and have other ambitions in life, than just raising a family and taking care of the house. It’s crucial that the way women are seen in the society changes.

“I’ve seen a change towards better already. However, us talented, ambitious young women must not have the misconception that we need to start acting like men or work harder than any man has, for a successful career.”

Featured image by Tim Mossholder via Pexels.
Edited by: May Al-Faris, Jussi Grut and Susu Hagos.

By Danielle Summer
9 Mins read
The representation of nuns through TV media today, is outdated, so we went to find out the reality.
Environment

By Hamida Ali
5 Mins read
A Just Stop Oil protester, who has been actively causing significant disruption in the UK for the past few weeks,…
Politics