In August 2020, it became clear that the Covid-19 lockdown measures had led the UK into a recession. Since the 2009 financial crisis, the employment rate has now reached an all-time low.

Although, there is hope surrounding the pandemic with the vaccine being released and distributed, figures from the Office for National Statistics (ONS) reveal there is a long way to go to bring our lives back to normal.

The unemployment rates from August all the way to October 2020 show that it was 4.9%, which means that 1.69 million people either lost their job or were out of work, also leading to a record number of 370,000 redundancies during last year.

According to the government, further evidence shows that the UK’s unemployment rate is anticipated to rise to 2.6 million by mid-2021, which will lead to 7.5% of the population impacted.

Sema Guler, a 21-year-old graduate from East London is one of those who have struggled to find a job during these hard times. “Graduate jobs have always been competitive, but it has been even more competitive during the pandemic given that some companies aren’t able to employ as many people as they usually do,” she says.

It is no secret that certain companies take their time to respond to job applications when the demand is high, which can be ‘demotivating’ while searching for a job.

Many graduates spend hours and those hours can even stretch into days to be able to complete a single job application. “When a firm doesn’t respond at all or provide any feedback even when asked, it can be quite disheartening.” Says Sema.

“Many of us hold a degree and have other relevant work experiences, but there are thousands of us competing for one role, so everything feels quite stagnant at the moment.”

Unfortunately, it is inevitable that there will be many graduates across the country who will be unemployed or working in a job that is not their graduate subject, throughout this year or even up until next year. There has been a sharp rise in unemployment as well as an increase in difficulty to find a job.

“I have been applying to graduate, trainee, entry-level jobs in Accounting, Financial services, particularly the ones that support you in gaining an accounting qualification such as the ACA and ACCA as I would like to eventually become a chartered accountant,” Sema told us.

“I have also applied for jobs in supermarkets and retail so that I could be working whilst applying for graduate jobs, but given how competitive it is right now, I haven’t been able to find employment yet,” she said.

According to a survey conducted by the Institute of Student Employers (ISE) called Covid-19: Global impacts on graduate recruitment the on-campus activities which help students to potentially find jobs or simply allow them to network such as job fairs, interviews, and assessment centres were either moved to online methods or fused into a combination of both digital and face-to-face methods.

However, with more than 10% of those who are unemployed being between ages 15 to 24 and making up the majority of them either student or graduates, what will the future mean for them?

Those who struggled to find employment graduates or otherwise have found that it is difficult to not only support themselves but also their family financially.

According to the governments’ official website, 2.4 million people signed up to Universal Credit, which is a single payment for each household to help with living costs for those on a low income or out of work.

It replaced six benefits, commonly referred to as the legacy benefits, between the dates 13 March 2020 and 14 May 2020, which was the first two months of the first lockdown in the United Kingdom.

Since the beginning of the pandemic, the number of claims made to Universal Credit reduced to 240,000 on July 9, 2020 suggesting a return to pre-pandemic levels.

“I am currently receiving Universal Credit which supports me financially. I also live at home with my family and contribute to rent and home expenses. I also have bi-weekly phone calls with my Job Centre coach who checks in on my job searches as well as informs me about any relevant vacancies that I could apply for,” says Sema. 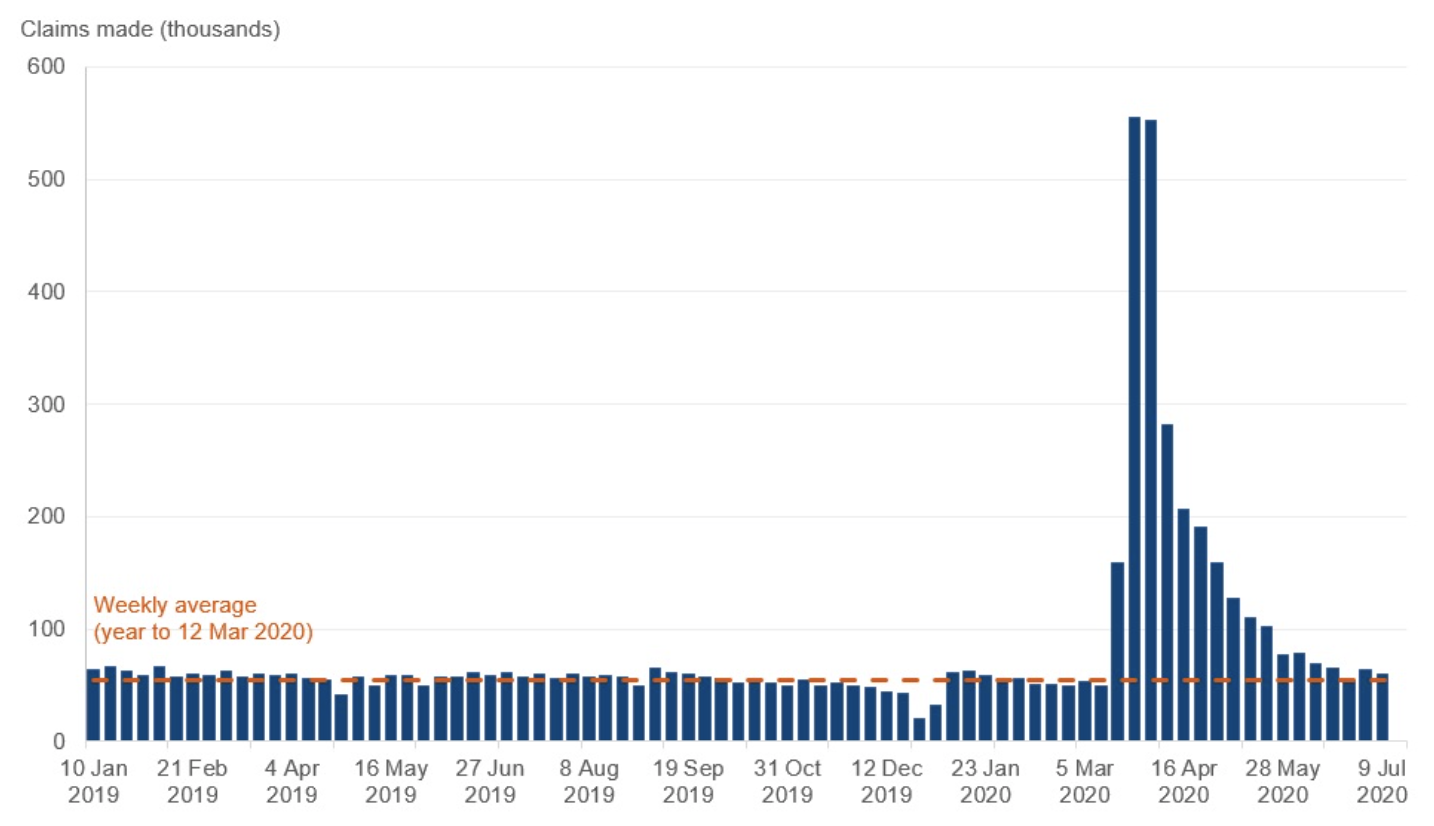 According to the Department of Work and Pensions (DWP), Universal Credit statistics, after the lockdown was introduced, it is clear that there has been a sharp increase in claims.

As seen on the chart, during the first couple of weeks, Boris Johnson declared a national lockdown, it led many to lose their jobs and caused a spike in claims, making up more than 500,000.

Tessa Read, a careers advisor at London College of Communication, has suggested that this time could be an opportunity to plan a career by identifying career goals. And asking yourself questions such as “What do you want to achieve and where do you want to be in five years’ time?”

“Write a comprehensive list of your current skills and see if they match what’s needed for the job(s) you’re aiming for. If you come across gaps, think how you can use this time to learn those skills. Watch online tutorials, enrol in free online courses and webinars, read books and ask your peers for advice and guidance,” says Tessa.

Another solution graduates have taken on is to stay in education, however for Sema although she has weighed the option of a master’s degree she says “the funding will be an issue”, and even though there are places abroad that provide scholarships the timing is not right for her.

Other than a master’s degree, there are options that require less commitment such as, MOOC‘s (Massive Open Online Courses). These are online courses that are not only affordable but also have the option for flexibility, making it easier to fit them into your schedule, or around a job.

There are also more options for remote working. With an excellent opportunity to carry your work home, it’s the best time to explore this line of work.

“I think those who are unable to find employment shouldn’t be too hard on themselves,” Sema admits. “It’s such a difficult time to find a job in an already competitive world. It is best to just keep pushing and don’t allow yourself to get demotivated.”