Growing up I absolutely fell in love with chick flick cinema. The protagonist who starts the film as a ‘loser’ or a ‘nerd’ with an aesthetic that consists of the reoccurring curly hair, glasses, and braces.

Mid-show there’s a major makeover montage where the protagonist has straightened their hair, the glasses have been replaced by contacts and braces have been removed and her ‘true’ beauty is revealed.

The Princess Diaries is a perfect example of this, yet it was and still is one of my favourite films. However, it was an emotional moment for me and rewatching the film I can’t help but feel that it is a reminder of the insecurities I felt at the time.

The frizzy hair was not fit for a future princess of Genovia so Mia, played by Anne Hathaway, left behind her curls which previously did nothing but invite ridicule.

“I take ‘This!’ and ‘This!’ and I give you – a princess.” were the words of Paolo, played by Larry Miller, during Mia’s makeover moment.

Ultimately, these movies told us there are actually a couple of options here; one is straight hair which allows you to climb the social ladder at the expense of damaging your hair, or two, keeping the frizz and being labeled a freak or nerd. Surely, for a young girl the answer is clear?

I found myself stuck to my screen nodding my head in agreement and believing this is what it took to be beautiful or attractive. As a young teen you’re vulnerable to the images exposed to you and I have been guilty of straightening my hair to the point of nearly permanently damaging it.

I’m pretty sure, fellow curl heads have at least at one point in their life been there. From blow drying and using excessive heat, to keratin treatments, and even trying permanent techniques which damage the roots and leads to the hair growing back horribly damaged.

I’ve untagged myself from many photographs on Facebook, and even begged my family to take certain photographs down. 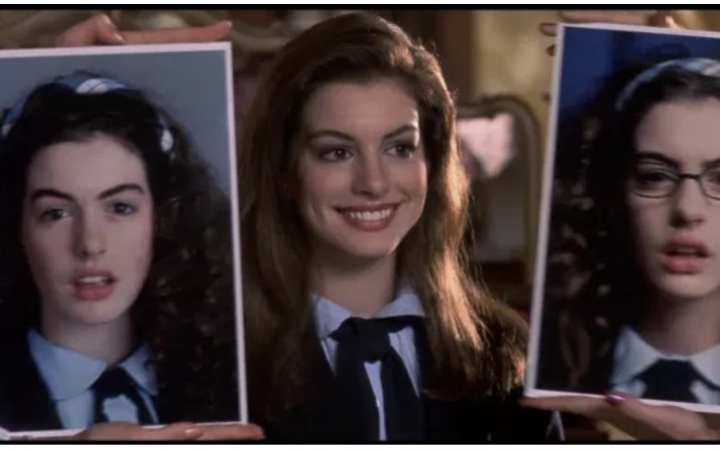 In The Princess Diaries, Mia’s best friend criticises her new smooth soft hair: “You used to care more about what was inside your head instead of on it.”

This feeds into the narrative often supported in society where curly hair has often had a stigma tied to it for being ‘messy’, ‘unruly’ and even in some cases ‘unprofessional’.

Although, I must admit, curly hair is hard to maintain and depending on the size of your curls it can even be difficult to keep tied up and even keep in a symmetrical style compared to straight hair.

Even working somewhere as informal as a pub, I’ve had occasional moments where customers would make remarks about my hair, “Oh you should straighten your hair”, “It will look better straight”, and even comments such as “Messy barnet you have there.”

It felt humiliating, but I knew I could not react to people who came from a complete different generation and who did not understand my personal experiences.

The work environment is not the only place people with curly hair have experienced unnecessary comments like I have. Attending secondary school, nearly 70% of the students there were of black ethnicity, and the school regulations were that the girls had to tie their hair in a single pony tail.

The majority of my black friends found this absurdly frustrating as they had to straighten their hair regularly, to be able to maintain it in a ponytail style suitable for the schools regulations.

I’m pretty sure my secondary school was not the only one, there are many schools across the UK with similar and maybe even the same regulations. It often raised the question why did curly hair ever need ‘fixing’ in the first place? Or whether people with straight hair were asked to curl theirs?

Boys, I hate to break it to you but no matter how innocent your intentions may be, telling someone with naturally curly hair they look better with straight hair is – and I cannot argue this enough – not a compliment. This, in a way, can be rooted back to media representation or in fact the lack of representation for curly hair.

Growing up I saw more and more curls on screen, and it made me want to embrace my own. A part of growing up is also accepting who you are as a whole, including our ‘frizzy’, ‘unprofessional’, ‘messy’ hair.

I think it’s about time we stop straightening and damaging our hair and we start wearing our manes with pride and challenge the standards that tell us that curly hair is unattractive.