Many students are frustrated as they have been told they have to work from home due to the third UK lockdown rules. More than a quarter of a million students were supposed to sit their ‘A’ Levels but have now been told that there will be no exams.

Not only are they juggling education from home, but 57% of students, according to the Office for National Statistics, have said their mental health and comfort is not as good as the first lockdown.

Students are more overwhelmed as the pressure is on them to push their target grade up in order to go to the university of their choice.

Chloe, who studies at Leyton Sixth Form College is concerned about predicated grades, and thinks that it can either work in everyone’s favour or not, and that not sitting any exams feels like two years was for nothing. 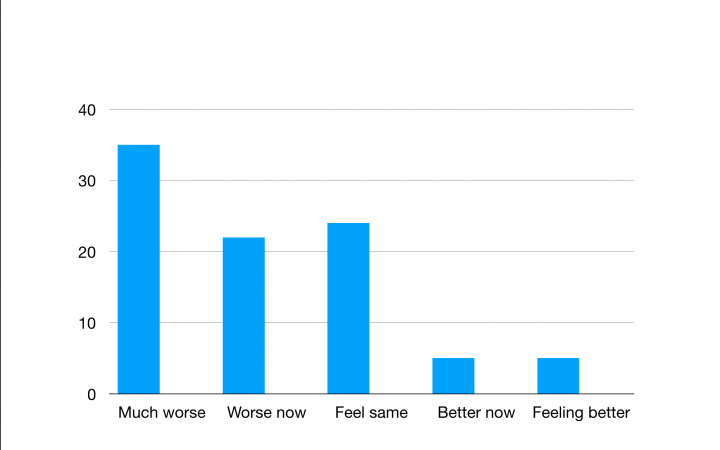 “I feel that the exams and getting a great result gives you that rewarding feeling, and it’s something you’ve been working on towards,” she said.

“I have mixed opinions on students getting their predicted grades. I believe that predicted grades are a reflection of your work ethic and not your knowledge. Teachers base these grades on your performance in class, homework, interaction,” said James, a student at the Manchester College.

“Therefore this does not show your understanding of the subject. I believe this because one may actually go home and study, but this may not be shown in class but be shown in the exams that we are unfortunately not sitting,” James added.

“But I do also believe in some cases, predicted grades could be beneficial, as some students are not as great with exams but do have that knowledge and are capable of achieving a high grade but struggle when it comes to exams. Some students will not get the grades they deserve, and some will.”

The National Union of Students carried out a poll with 4,000 students taking part. 52% reported that their mental health had worsened and has been triggered by Covid-19. On the other hand, 29% of those asked for help and 57% said they were pleased with their support.

Last year on results day for college students, many were upset as they didn’t receive their target grades for the university they wanted to go to.

Many students and family went on to Twitter to bring awareness to what is happening. Many students were supposed to go to Oxford but were declined because of their grades. 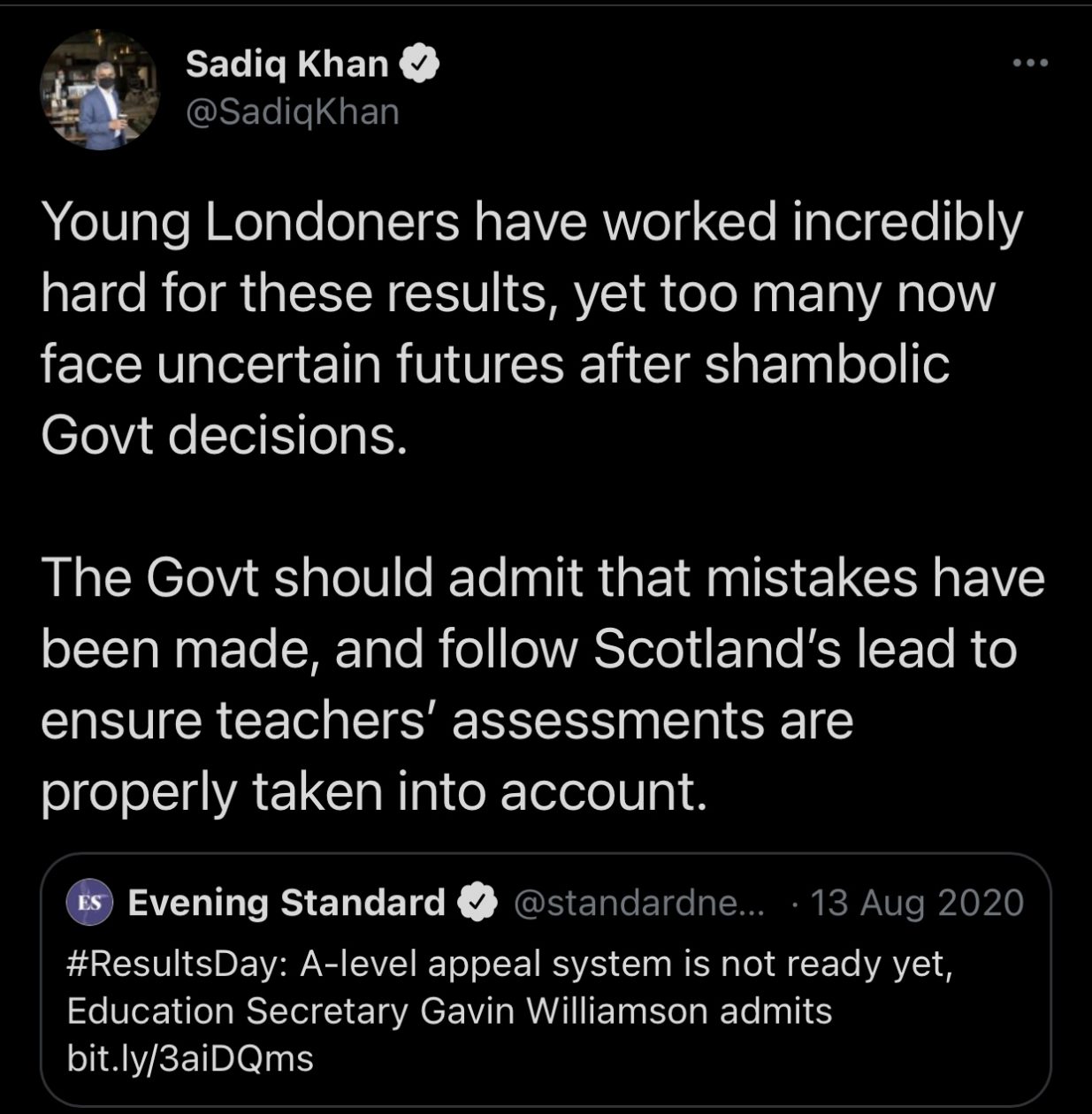 A third-year student called James who studies BTEC IT Level 3 extended diploma at The Manchester College said: “Doing a BTEC in a pandemic is quite frustrating because it means we miss out on doing the more practical work that comes with BTEC. There is also difficulty staying focused whilst working on my coursework because of the background distractions in the house.”

James said when he was first working from home, he used to go to the gym for his mental health and work all the stress out, but as they have closed, he hasn’t been more motivated to get everything done.

Even though he believes that BTEC studies are fine compared to other students doing ‘A’ levels, a particular reason for this circumstance is that BTEC students aren’t being judged on their target grade, just their coursework.

“Working from home does have its pros and cons. I have noticed that working does negatively affect my concentration levels; however, overall, I’m in a better position than most students who thought they would be sitting exams.”

James explains that the work he’s getting done at home doesn’t compared to the amount of work he gets done when he is in college because of the greater access to school equipment. 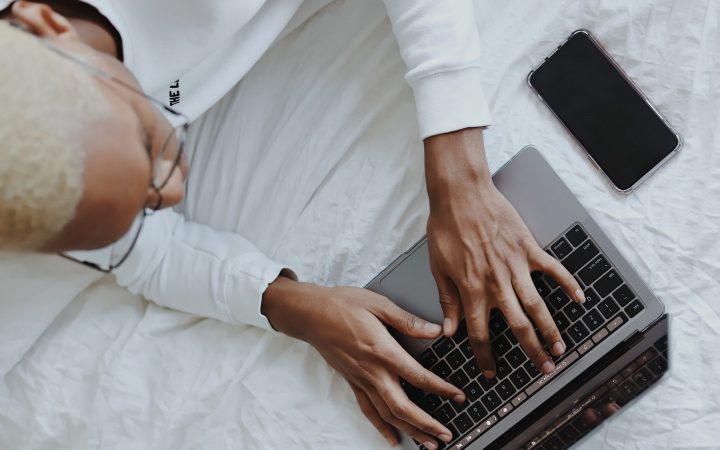 Students can even get away to the gym [Unsplash: Good Faces]

“I plan on studying cybersecurity or game development at Birmingham City University. Both of the subjects do interest me to a certain extent, but I am leaning towards cybersecurity, and they are asking for MMM (Three merit grades).”

James said he does believe he can achieve the grades he needs to go to the University of Birmingham City because he is fully aware of his capabilities as long as he keeps himself focused.

On the other hand, he is very wary of reaching the requirements because there is a high possibility the academic year will be cut short and won’t have as much time to submit a similar amount of work compared to previous year groups.

In January 2021, the government gave colleges the choice to decide if their pupils will go ahead with BTEC exams in England as the government shifts the policy in light of the new national restrictions. They also offered financial support for students affected by this.

More than 130,000 students were supposed to sit exams for BTEC and other technical assessments. 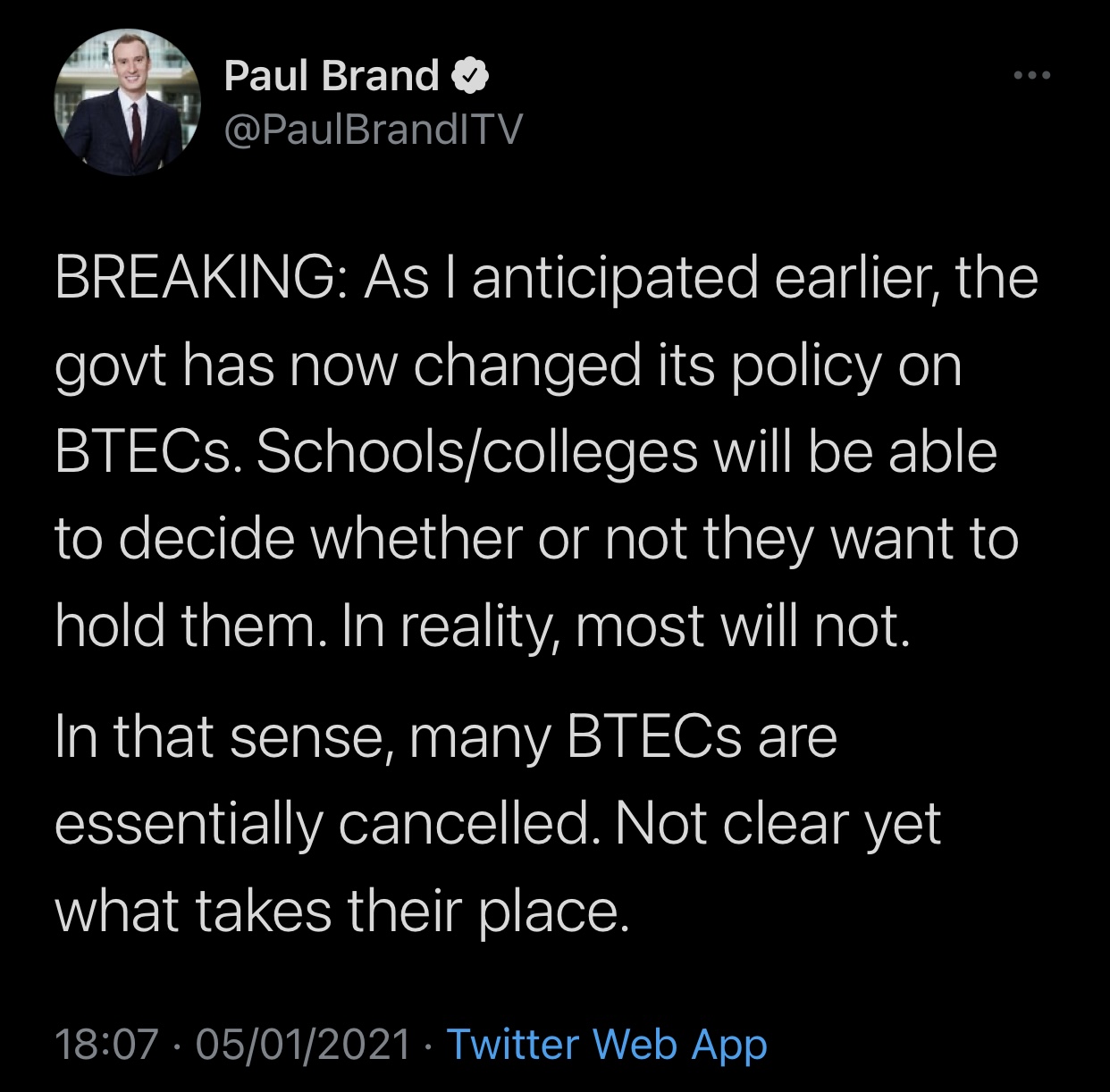 Chloe, a Psychology, Sociology, Health and Social Care Level 3 (BTEC) student at Leyton Sixth Form College in her Final year said: “In university, I would like to study Mental Health Nursing, but still not entirely sure, so I would like to take a gap year to figure that out. If I was going to university this year, the grade depends on which university I would like to go to, but the requirements are usually around AAB or ABB.”

Chloe said she does believe she could get her predicated grade as she Is in a better situation than last year’s students as it all happened so fast, but it is finding the motivation to get the work done, which Chloe finds difficult.

“I do believe doing BTEC is easier as you’re getting your work checked constantly and they can advise you how to make your work better, while with ‘A’ Levels it’s all about your ability you’re being tested on and then waiting on the results while as BTEC you kind of have a gist of what you grade is.”

When speaking to Chloe about how working home is for her, she explained that working from home is draining and is not as efficient as being in school.

It’s too hard to find the motivation, especially due to the fear of the unknown. It’s also even harder if your home is not a working environment, making it much more difficult as there are so many distractions. This has made her more anxious.

“I get such little work done at home, I have quite a few siblings and a noisy home, so there are so many distractions. I have no motivation, which makes it even worse,” she said.

“Also, it feels like my ‘A’ Level subjects are giving me more work than it actually does in college, making it harder to keep up. I am more anxious, especially because it is my final year. We just don’t know what will happen, and for some people, it may actually be detrimental to their career.”

You can get support from a number of organisations including Young Minds, Student Minds, Mind.org, and Child Mind.