The hospitality industry – as a whole, but especially in London – is currently going through a complete overhaul, after losing the mass of its workforce due to a toxic concoction of coronavirus and Brexit.

In a sector that solely relies on people to run, sadly there’s no ability to buy your cappuccino online just yet; the field as a whole is struggling to cope with skeleton staff crews left underpaid and overworked. Ironically, it’s just pushing even more to leave the industry.

A report from the Office for National Statistics (ONS) detailed that between April and June 2021, hospitality had the largest number of vacancies of any industry in Britain, the largest level of vacant roles in the sector since records began, underlining the employment crisis that the field is going through.

Subsequently, this has allowed the industry to run rife with accusations of sexual harassment, racism, bullying, misogyny and general misconduct, with little to no repercussions for the perpetrators; feeding into a culture of mistreatment that has been left relatively unchecked.

With very few replaceable candidates insight, the power-imbalance of the industry has shifted in favour of offenders, who appear to be retaining their positions despite their misconduct, due to the sheer desperation of establishments to carry on operating.

And at the helm of this issue, left most unbridled, are usually the chefs – often the most relied upon person in any restaurant, the profession has received backlash for a while now for its glorification of bullying through shows such as Hell’s Kitchen.

“It was a lot to do with them (the chefs) thinking they own the place, that they’re somehow superior in that environment, I think that’s the base of everything, that and patriarchy” one young woman recalled, having asked to remain anonymous.

“It adds up to the fact they feel free to do whatever they want, them taking advantage of their power, I believe is just general kitchen behaviour.”

Considering the hierarchal positions of most senior kitchen staff, it can be hard to speak out against harassment or bullying if the victim takes a more replaceable role within the establishment – a waitress or barista, for example. 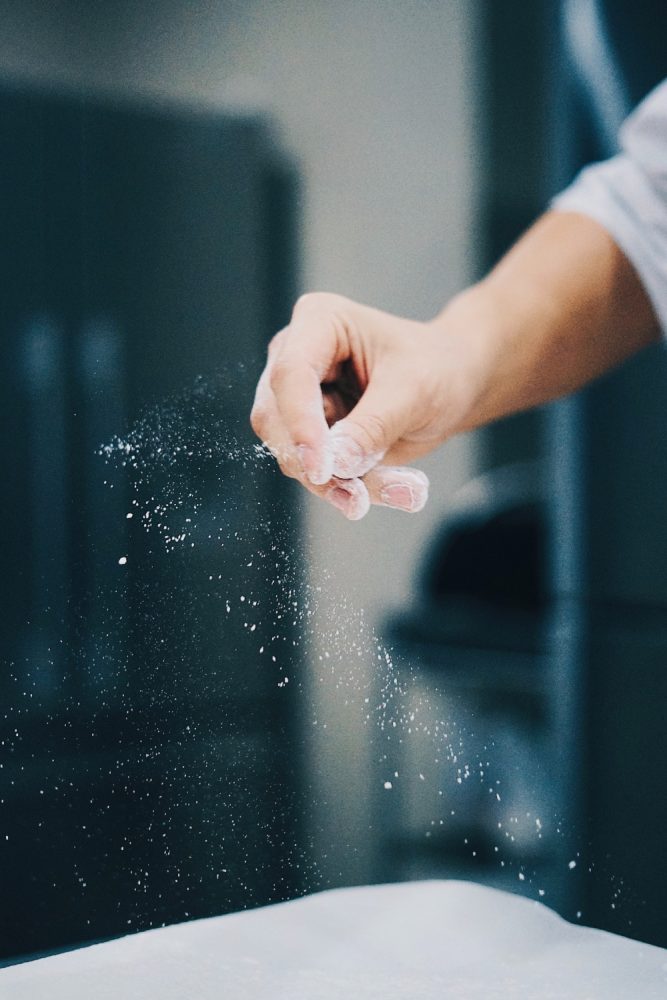 Those smaller roles are more expendable when compared to the critically-trained roles that chefs usually take, which means, quite frankly, if you’re bringing a problem to the table and you’re not as valuable to the team, so it’s easier for management to make you redundant, or ignore the issue until you resign in protest.

This poses a huge issue, especially in London, a culturally diverse and reliant city. So, even though it breeds a toxic workplace, chefs accused of bullying or harassment aren’t facing many repercussions. However, the restaurants they work at would cease to open without them; as opposed to the relatively uncomplicated and trainable job of the most front of house staff.

Like a large number of other young women in the industry, I have been the butt of many sexist jokes, along with unwanted advances and unsolicited sexual remarks from the male kitchen staff.

But I’ve also been just generally bullied by chefs, sometimes so badly it’s driven me to leave my job even though I’ve been reliant on it to pay my rent; the risk of not finding another income has been easier to comprehend at times than staying and continuing to be subjected to anxiety-inducing aggression every time you walk into work.

Most of the same places I’ve left have preserved the jobs of the chefs I brought complaints forward about, highlighting just who was more replaceable.

Sadly, my experiences in the industry aren’t rare; it seems they are actually endemic within the hospitality sector that now seems to be fostering misconduct.

One of my interviewees described the escalation of bullying and abuse from one of the chefs they worked with: “It slowly transformed into sexual things, because of how intimidated by them we were, because of that dynamic, they would come in and start asking things like ‘Are you dating? Are you seeing someone? What do you look for in a man?’

“It got progressively worse. It then became things asking like ‘How do you like sex?’ Very, very personal things, I was so scared of them.” She then went on to say something that was hard to digest but didn’t surprise me: “I think some other girls had it even worse, underage girls.”

Another woman went on to tell me about an experience with a chef that left her shocked: “He said to me ‘Look, when I tell you to wait, you wait, maybe they should send you back to Turkey so they can teach you to act like a real woman and listen to men all the time.’” 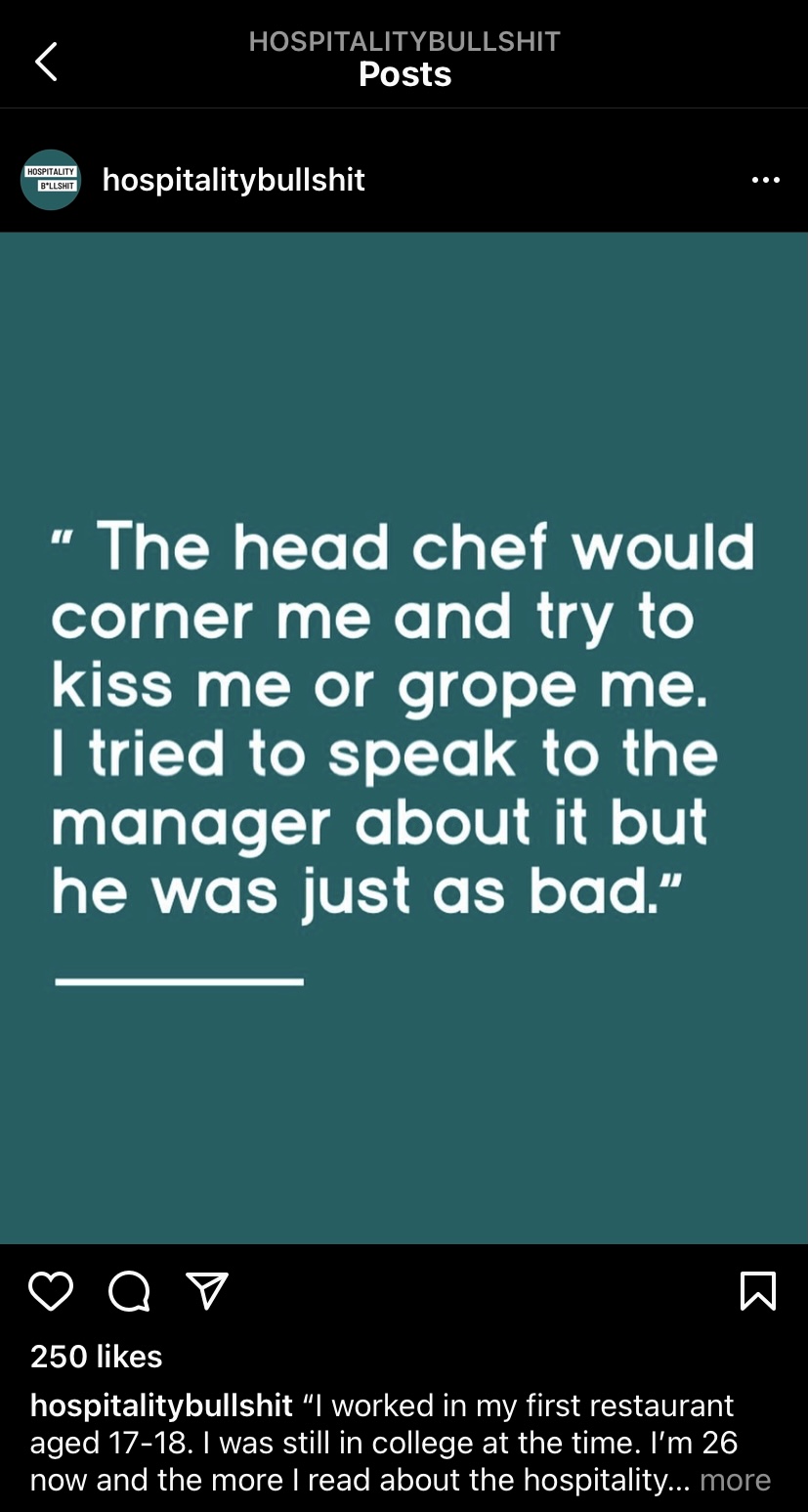 An Instagram page called Hospitality Bullshit (@hospitalitybullshit) has grown a cult following online for naming and shaming perpetrators within the sector, along with the establishments that protect and foster their growth.

The page regularly shares testimonials from staff who’ve been subjected to the poorest treatment, even ‘tagging’ the chefs or management responsible. While I do believe we should hold people accountable for their actions, there’s been backlash against the account for their involvement in promoting and facilitating ‘cancel culture’.

Accountability is something that the industry is lacking, and pages like Hospitality Bullshit are making a difference, giving this systemic issue real faces and names. At the very minimum it is raising awareness, so other potential employees aren’t put in stressful or precarious positions.

It appears that the issue is systemic, inherently the majority of chefs in the UK and London come from a predominantly white background, with the bulk of the field also being male.

Diversifying the field and advertising training to include more women and people of colour – making the kitchen more diverse and as representative of the front of house staff too – could be a good first step in addressing these issues.

Along with this, professionalising the industry could lead to higher standards, better regulation and implementing steeper repercussions and consequences for those abusing their power.

We’ve seen this make a difference in countries like Australia, where the Fair Work Ombudsman in tandem with the Australian Human Rights Commission take accusations of bullying in hospitality seriously, supplying the right information and resources to anyone who wants to go ahead filing a report, and investigating each claim.

This was brought into law in Australia through an amendment to the Victorian Crimes Act of 1958 called Brodie’s Law; named after 19-year-old Brodie Panlock, who sadly took her own life after suffering intense bullying at work. The offence is punishable with up to 10 years’ imprisonment if found guilty.

Similarly, there’s been a call in the U.K. for restaurants found guilty of sexual harassment or bullying to be stripped of Michelin stars or Rosettas, although this will only solve the issue in a limited number of establishments.

It’s clear that the sector needs an image overhaul. The negative stereotypes that have been associated with the industry for too long are resurfacing, as exponentially more people have found their voice and courage to speak up against the things they’ve had to put up with to make a (usually minimum wage) living.

The industry is undoubtedly in desperate need of reform, or it’ll end up losing the very people it can’t function without.