The pandemic has seen people taking up wholesome activities and new hobbies like nobody’s business – pottery being one of them.

Air-dry pottery kits were highly sought-after during lockdowns. Channel 4 brought back The Great Pottery Throw Down – a pottery contest similar in nature to The Great British Bake Off and The Great British Sewing Bee – providing heart-warming, therapeutic content for Sunday evenings.

As a result, pottery studios have seen people flocking to them for taster sessions and memberships.

Studio Pottery London (SPL), a Belgravia-based ceramic studio, knows this all too well, and I met their artistic director, Gregory Tingay, to find out more about the meditative craft.

“We decided the name was a good decision, because it anchored us in the tradition but also gave us a modern, urban twist.”

After kindly booking off one of his teaching slots, we arranged to meet up at the studio, although having rocked up with half-an-hour to spare before our interview, and not wanting to complete a third lap of the area, a trip to the bakery next door was in order.

A short while later, Gregory messaged me asking if we could meet after he’d grabbed lunch. It turned out he was also in Ole & Steen, so we got chatting all things writing over a berry tea and toasted sandwich before heading to the studio.

After parking ourselves by his potter’s wheel, we dived straight into what SPL is all about: “As the name suggests, it’s a combination of the studio pottery and history, ‘London’ gives its location. We’re sort of harking back to our heritage.

“When we came to found SPL – myself and Lucy Attwood, who’d been my pupil – decided the name was a good description because it anchored us in tradition, but the addition of ‘London’ to it gave us a modern, urban twist.” 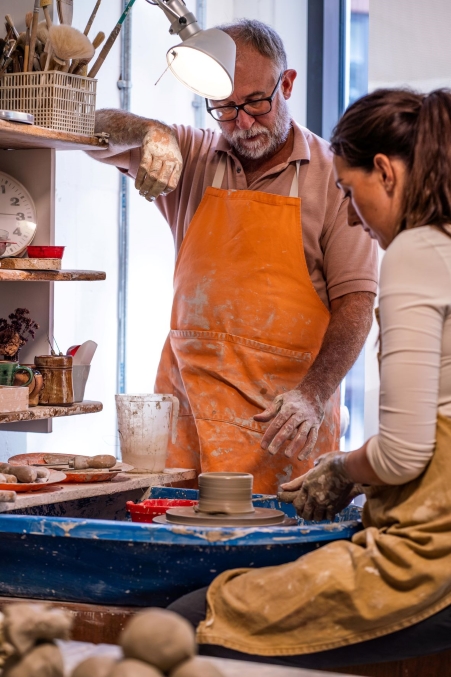 British studio pottery actually dates back to the early 20th century, a specific incarnation of the craft which has been around for millenia.

In 1920, Bernard Leach, an English potter, and Shōji Hamada, a Japanese potter, founded Leach Pottery in St Ives, Cornwall. Shaping the studio pottery movement, the place went on to become one of the most respected potteries in the world.

Back then, studio potteries were rustic and primarily based in the countryside; they housed wood-fired and oil-fired kilns, fused British and Japanese traditions and focused on producing only functional wares.

Nowadays, they are also based in cities, are home to electric kilns, offer more than just wheel-thrown pottery and produce functional as well as artistic pieces.

SPL pride themselves in combining both the past and modern way of the craft, making it the first studio of this type in Central London. The two-year-old studio – designed by another one of Gregory’s former pupils, Vesna Aksent, who’s an interior architect – has an assortment of offerings.

It offers memberships which include access to wheels, glazes, kilns, assistance from technicians, the opportunity to do hand-sculpting and showcase work at markets, as well as tri-monthly mentoring from Gregory. It also offers group taster sessions, private lessons, advanced classes, talks to lift the culture of ceramics, demonstrations, and retreats.

Thanks to Grosvenor’s Retail Concierge Service, the studio was up and running in just four weeks.

With all that SPL has to offer, there’s a real sense of community. “It’s not an anonymous group of people; we try to create a community. We’re very much there to cultivate our members, to assist them as far as possible in their varying journeys,” Gregory told us.

Gregory’s pottery journey began when he was just 15-years-old, living in Zimbabwe. His classmate’s mother – who was one of the leading potters in the area – offered to set up a pottery club, which is where he got the bug for throwing and making pots.

Recalling his childhood, he told us how fortunate he feels to have had this experience, given the fact that pottery isn’t something schools tend to offer nowadays.

Between then and going to study English and art history at Cambridge, he decided to take a break from it. He toyed with the idea of joining the university’s ceramics society – run by Edmund de Vaal, one of the leading lights in the pottery world who opened SPL – but was put off by the number of people involved. 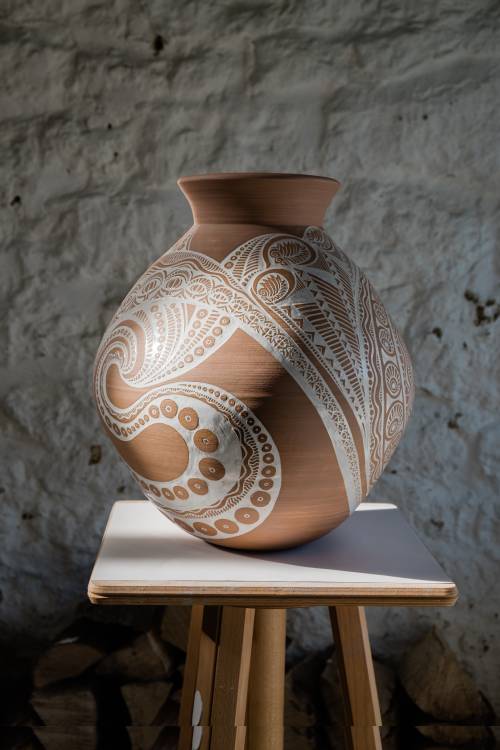 After graduating, he went back to Zimbabwe to teach art history and work on films. Here, he met a woman who was familiar with one of the monks – a famous stained glass maker – at Buckfast Abbey.

Being interested in all things monastic since attending a monastic school, Gregory joined the Abbey in 1990, working in the stained glass department.

To his surprise, it also had a pottery. So, he plucked up the courage to speak to the people who ran it, Mary Gibson-Horrocks, a pupil of Bernard Leach’s in the 1940s, who took him on as an apprentice with the Abbot’s permission.

This meant having to put stained glass-making to one side, as there wasn’t the time with all the other commitments that come with being a monk: learning Latin, climbing up the tower to ring the bell, cleaning toilets and raking leaves.

“She grounded me in the technique of repetitive throwing of the same pieces, the ethos of attention to the beauty of form, and the holistic approach to using the heart, the mind, the hands whereby when you were making the pots, the end result speaks somewhat of the maker,” he told us.

Mary also got Gregory into sgraffito – scratched decoration produced by applying coloured slips to leather-hard pottery and scratching off parts of the layer to reveal another colour underneath.

She educated him on the 20th century luminaries of pottery such as Lucy Rie, a Viennese potter who often did sgraffito pottery. Inspired by Lucy’s work, one of Mary’s carved wooden vases and his love for patterns since the age of 15, Gregory started doing sgraffito pottery and has continued to do so. His exquisite pots can be purchased from SPL‘s window display and website.

Pottery is for novices and experts alike, though. Gregory briefed us on why people got into it during the pandemic. “A lot of people have been stuck at home and desperate to do something creative with their hands and be in a place where there’s a community where they can do things together,” he said.

“I also think people were discovering the therapeutic value of it. A great element of throwing on the wheel requires patience, slowing down and repetition. You go into a different zone and mindset. You can escape from all your worries to a degree.

“Also, it’s a craft that connects us way back to what it means to be human. Humans have always made pots. When we date archaeological sites, it’s usually through fragments of pottery vessels. Pottery vessels – we use them to drink from, eat from, contain things in. It’s very much to do with our everyday life, so it’s that element of someone being able to make something they can use or enjoy.

“And because it’s very much skill-based, most people can muster up some skills at the wheel. It’s a different business from someone wanting to become a painter or artist.”