“All I’m getting is a fork – is there even any food on my plate?” The man next to me wailed in frustration. A few minutes later, I heard a clatter as he threw the fork onto the table. “Fuck it, I’m using my hands.”

I laughed and called out, “Same! I left my cutlery and table manners back outside those curtains earlier.”

As you can tell, Dans Le Noir? isn’t your typical restaurant. Hidden in the back streets of Farringdon, the restaurant holds something unlike any other: you’re served by blind waiters and you dine in total darkness.

Once you enter, guests are told to leave their belongings, including phones and shiny objects like watches, in the lockers provided. After this, diners pre-order their menus and indicate any dietary requirements they have.

There are four surprise menus to choose from, catering for all different palettes. Vegetarians are given a green menu, carnivores get a red menu, and if you love the taste of the ocean, there’s the blue menu. The adventurous types can choose the white, ‘chef’s surprise’ menu. I took a risk and opted for the chef’s surprise.

Waiting to be seated, I began to feel slightly nervous. My mind drifted to the food trials in I’m A Celebrity…Get Me Out Of Here! 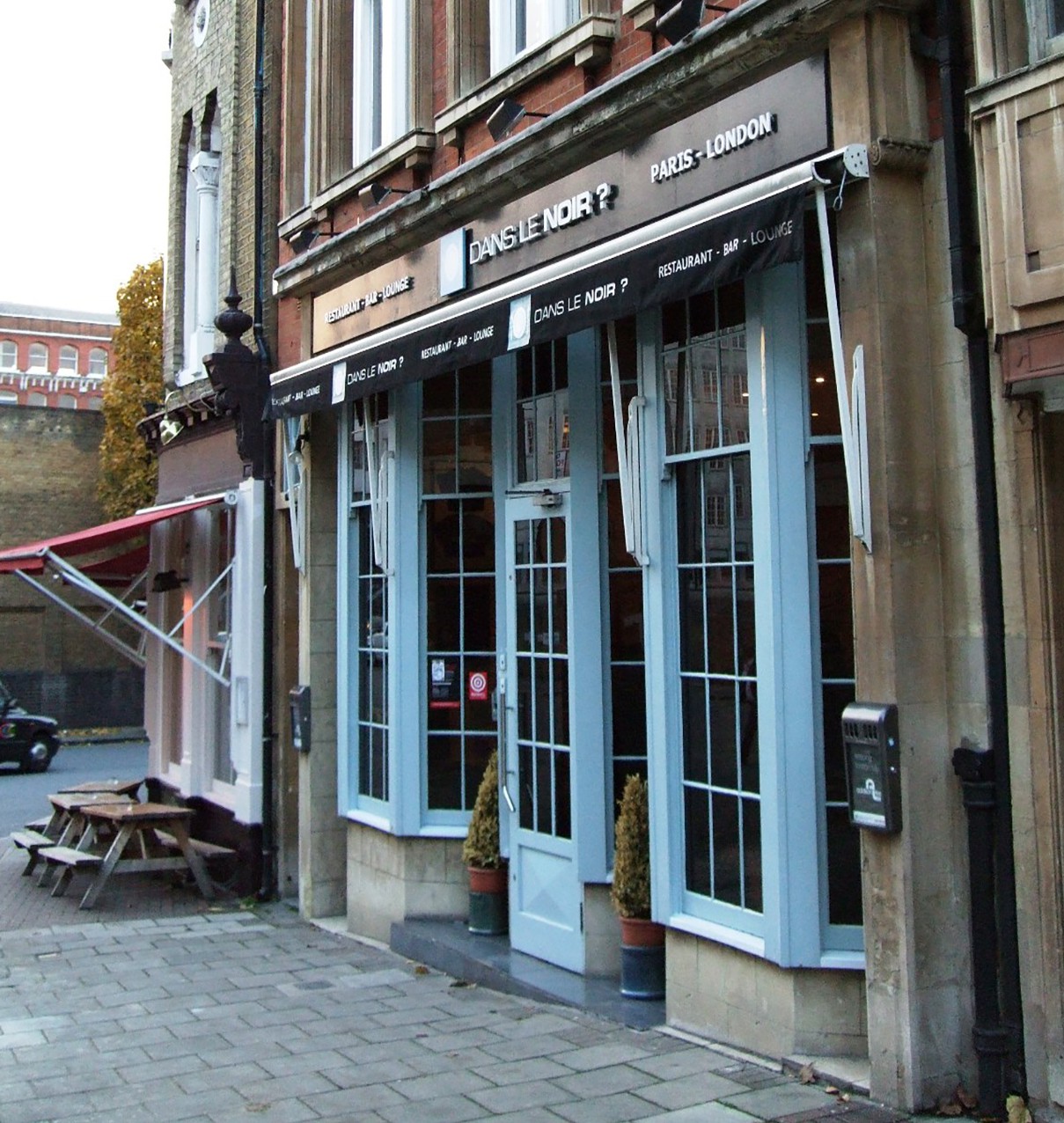 What if the ‘chef’s surprise’ meant I’d be served testicles or some kind of fried insect? I was going to have to find out.

Once we’d selected our menus, we were led into a small hallway illuminated by crimson light. Dingy and poorly lit, it reminded me of the red light district in Amsterdam.

The anticipation rose as we were told to stay outside two thick, black velvet curtains until our waiter arrived.

I could hear a muffled sound from behind the curtains and a few guests stumbled out, laughing. One man turned to me, chuckling, “Have fun. It’s fucking weird in there.”

Finally, our blind waiter Jack greeted us. Blind leading the blind, he slowly led us through the heavy curtains and we immediately found ourselves immersed in darkness. Unable to see, a sense of disorientation and panic hit me as my ears picked up the loud chatter and laughter that surrounded me.

The room was warm and I got the impression that it was shrinking – I wouldn’t recommend going to the restaurant if you’re claustrophobic.

As I hesitantly placed one foot in front of the other, my panic lessened at the sound of Jack’s friendly voice, cheerfully reassuring me as he directed me forward.

We were soon seated at what my wandering hands later realised was a long table. Other diners were seated either side of me and we greeted each other in a pleasant manner.

We were required to pour our own drinks, which induced laughter as glasses were overfilled and complaints when the wine glasses weren’t respectably filled. My own glass went missing halfway through the meal, so I had to make do with drinking from the water jug.

Despite the interesting dining experience, at £52 for a three course meal, the food was disappointingly mediocre. The starter was tuna sashimi – not exotic at all and something you would probably have at a run-of-the-mill Japanese restaurant.

The main course had a mix of three different mammals, but sadly no organs – foie gras would have sufficed. It was venison, wild boar and zebra. Only one out of these three could be considered remotely exotic. Dessert was especially lackluster. A mush of lumpy caramel brûlée with a profiterole.

Is Dans Le Noir? worth the visit? It does have an unusual concept; the blind dining experience aims to tantalise and arouse the senses with the culinary delights that are placed in front of you.

However, expectations fell short in reality. Halfway through my main course I grew bored and wanted to leave as soon as possible. This place is also not for romantic or private conversations since everything can easily be overheard – so mind what you say!

This restaurant with all its novelty didn’t leave an impact on me. If you have around £100 to spend you could try this experience at least once as it’s certainly different.

If you don’t – doing your own little Dans Le Noir? at home with your loved one would be a much more intriguing and exhilarating experience!

What could go wrong?