Molly Turnley
January is a time of guilt, reflection and empty bank accounts. There’s usually a drought of gigs at this time too – but fear not – here’s a great line-up of cheap and up-and-coming artists to see you through next month.
Esben & the Witch – December 29
Esben and the Witch are a British trio formed in Brighton with an eerie, spellbinding sound and a band name taken from the Danish fairytale of the same name. Their newest album A New Nature was released in 2014. They’re a gritty and atmospheric live act – see them for £8.50.
The Lexington, 96-98 Pentonville Road, London N1 9JB
Withered Hand – January 6
Withered Hand – Edinburgh-based Dan Willson – released his first album Good News in 2009 and recently released his second, the wise-feeling New Gods, which explores age, love and death in an interesting manner. Tickets – in advance – £10.50.
The Lexington, 96-98 Pentonville Road, London N1 9JB
J Mascis – January 8

J Mascis is the singer, guitarist and songwriter for Dinosaur Jr. and has produced two beautiful solo albums. They’re pieces of music to be listened to alone, and will be the type of gig in which you can drift off into your own world – for £18.

Scala, 275 Pentonville Road, London N1 9NL
Joe Goddard, Andre Bratten and guests – January 9
Joe Goddard, AKA ‘you know, the guy from Hot Chip’, returns to XOYO this January to play to a sea of very drunk and very appreciative fans. He’s a DJ in his own right and will deliver a fun night. Early bird tickets have sold out, but there are still general admission tickets for £13.50.
XOYO, 32-37 Cowper St, London EC2A 4AP
Cymbals Eat Guitars – January 12
Cymbals Eat Guitars made the Pitchfork ‘Best New Music’ selection with their debut album Why There Are Mountains in 2009, and second album Lenses Alien, which is messy with distortion but somehow always heartfelt and real. Now they return in 2014 with a third album Lose, which is just as complex, loud and a great example of American indie rock today. Tickets for £13.
The Garage, 20-22 Highbury Crescent, London N5 1RD
Kindness – January 16
Solo artist Adam Bainbridge released the extremely well-received Swingin’ Party in 2009, and has since released two LPs – World, You Need a Change of Mind and Otherness – which features solid guests such as Devonté Hynes, Robyn and Kelela. His R&B stance is both infectious and gives his music an easy-listening quality. Tickets are £15.
Electric Brixton, Town Hall Parade, London SW2 1RJ
Alex Burey – January 21
19-year-old South Londoner Burey requires that you have a good armchair, a soft heart under that cold, shiny exterior and that you’re in the mood for some serious self-reflection in order to listen to his first and extremely impressive track Unspoken. He reminds me of King Krule and Bipolar Sunshine – young, honest and I’m genuinely excited at the prospect of future releases. Tickets £7.50.
St Pancras Old Church, Pancras Rd, London NW1 1UL
Ben Pearce, Will Saul and Line 8 – January 23
Well, it’s Ben Pearce, what more do I have to say? Even if this isn’t your usual choice of music, I urge you to get your groove on to this bunch of talented DJs at XOYO. My head’s both bobbing and aching at the thought. Early bird tickets are just £6, and general admissions are £13.50.
XOYO, 32-37 Cowper St, London EC2A 4AP
PIAS NITES – The Fat White Family, Ghostpoet & Balthazar – January 26
If you haven’t heard about Fat White Family by now, you must’ve been hiding under a rock. They’re a loud-and-proud five piece from South London who’ve been screaming into the eardrums of sweaty, head-banging fans for a while now. Ghostpoet will also be playing, and with two wonderfully raw and thoughtful albums under his belt, it’s likely he’ll be showcasing some new music, which’ll be a damn good treat. Along with Balthazar, a Belgian five-piece with an almost-cockney swagger about them. Tickets are £13.75.
Village Underground, 54 Holywell Lane, London EC2A 3PQ
Emmy the Great – January 27
Having released two popular albums – First Love in 2009 and Virtue in 2011 – and also working on all of the Noah And The Whale albums, Emma-Lee Moss of Emmy the Great is back with a new single Swimming Pool – an exciting return! See her live for £16.50 at new venue Oslo in Hackney.
Oslo Hackney, 1a Amhurst Rd, London E8 1LL
Cymbals – January 27
With a sound reminiscent of ’80s synth music, London-based Cymbals have released three very promising and very catchy albums. Their last release The Age of Fracture features the gem The Natural World, which after just one listen will get you hooked. See them for £10.75.
The Waiting Room, 175 Stoke Newington High Street, London N16 0LH
PIAS NITES – Teleman, Wytches, Gengahr – January 27
Teleman, with members of the fabulously indie but defunct group Pete & the Pirates, released their debut album Breakfast in 2014. Their sound is clean, crisp and instantly likeable. ‘Surf doom’ is a term which crops up a lot when describing The Wytches, a three-piece psychedelic group from Peterborough now based in Brighton. Gengahr are important enough to be playing alongside alt-J and Wolf Alice at the O2 – look them up. Tickets for £13.75. 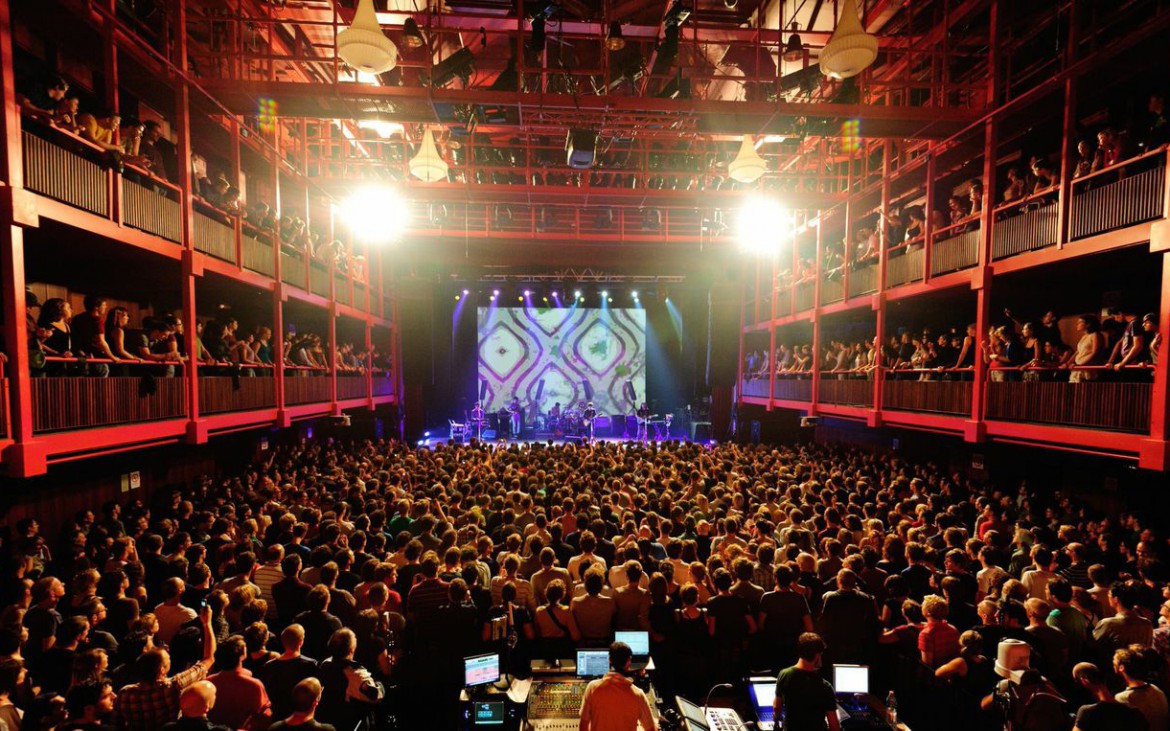 This Canadian quintet are every hipster music blogger’s wet dream. But their romantic and dreamy front-woman makes them stand out from the moany and dreary with her naive ‘struggles-of-a-twenty-something’ style lyrics. Their debut album Alvvays is well worth a listen, with moments reminiscent of the first time we heard Warpaint. Tickets for £10.

Scala, 275 Pentonville Road, London N1 9NL
Leddra Chapman – January 28
Leddra is very happy-go-lucky, and everyone needs a bit of fluff and happy-clappy stuff sometimes! Her debut album Telling Tales is fabulously catchy, unapologetically poppy, pathetically innocent and has songs like Story and Summer Song, which use brass and percussion in such a way that make her high school innocence both forgivable and comparable to the likes of Lisa Mitchell, St Vincent and Feist. Tickets are £13.75.
Jazz Cafe, 5 Parkway, London NW1 7PG
The Barr Brothers – January 28
Montreal-based brothers Brad and Andrew Barr make up half of the folk-rock quartet The Barr Brothers, the other two being classically trained harpist Sarah Page and multi-instrumentalist Andres Vial. Their new album Sleeping Operator released in 2014 is wonderfully constructed, allowing you to flow through the album effortlessly. With an array of interesting instruments, they never let you get lost in the entanglement of different noises and sounds. £15.40 for tickets.
Bush Hall, 310 Uxbridge Rd, London W12 7LJ
Neneh Cherry – January 28
Swedish-born rapper, musician and occasional DJ and broadcaster Neneh Cherry released her first solo album in 18 years in 2014 – Blank Project – which has been described as “evocative beat-style poetry”. This is an unmissable opportunity to see Cherry perform her new material for just £15.
Electric Ballroom, 184 Camden High St, London NW1 8QP
Nathaniel Rateliff & Band  – January 29
Nathaniel and his five-piece band take to the modestly-sized Bush Hall stage in January playing their fantastically melancholy second album Falling Faster Than You Can Run. Colorado-bred Nathaniel first graced our eardrums with the track Shroud from their debut album, which is honestly nothing short of a masterpiece. Tickets are £12.50.
Bush Hall, 310 Uxbridge Rd, London W12 7LJ
Alice Russell – January 30
If you’ve never heard of Alice Russell please look her up right now, find a comfortable chair, close your eyes and let her soulful Chaka Khan vibe take you somewhere else. Alice is a Suffolk-bred vocalist with a very memorable and infectious rhythm to her creations. She’s definitely worth a little more than our two-tenners guide price at £24.20.
Jazz Cafe, 5 Parkway, London NW1 7PG
Jefferson Starship – January 30
Yes, it’s the same Jefferson Starship from the ’70s, and hell yeah they’re back! With a new album, Soiled Dove. This gig, in an, erm, bowling alley, will be unmissable. Tickets from £25.
Brooklyn Bowl, The O2, Peninsula Square, London SE10 0DX
Sulk – January 31
English psychedelic five-piece Sulk released their debut album Graceless in 2013, which was well-received and full of likeable, head-bobbing guitar music. They supported Happy Mondays on their 25th anniversary tour in 2013 and tickets for their live performance at Oslo are a mere £6.75.
Oslo Hackney, 1a Amhurst Rd, London E8 1LL
Featured photo courtesy of Janne Hellsten

Feed your spirit at Roof East

Hackney during the 70s