Why US universities have a sporting hold over their UK counterparts 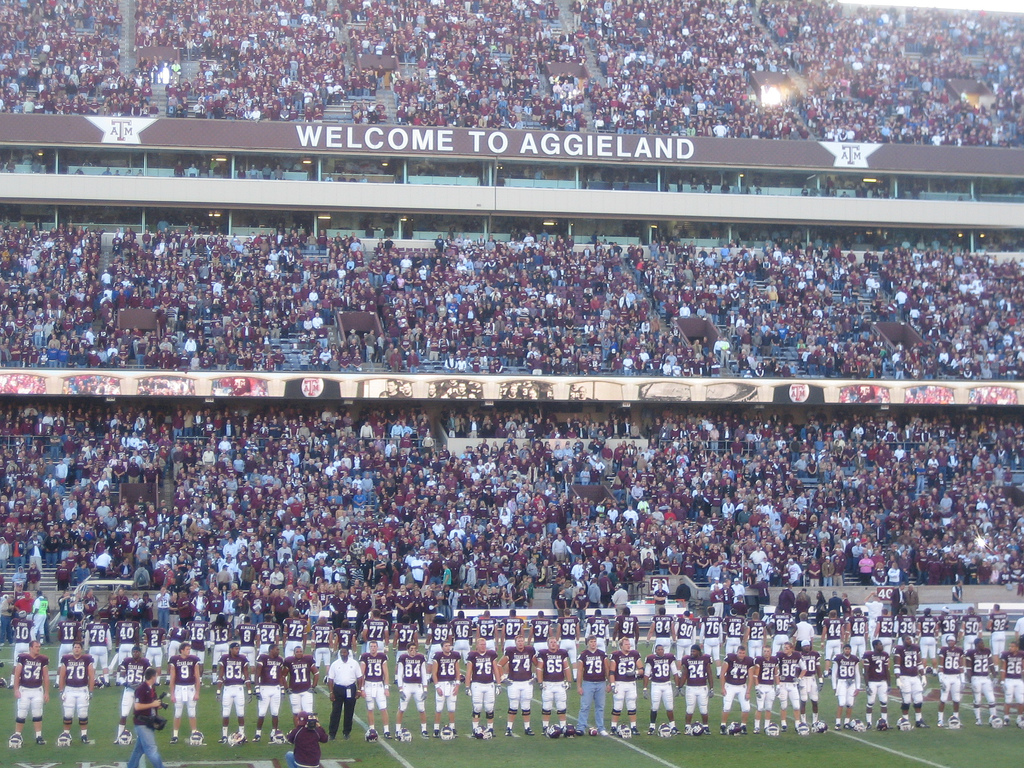 College football, basketball and even athletics in the US are almost a way of life. With regular attendances at games of 30,000-50,000, the question is why is university sport so huge in the States compared to the likes in the United Kingdom.

In a recent gridiron clash between the University of Alabama and Mississippi State University (MSU) an astonishing 101,821 were at the game. In contrast, university sports teams up and down the UK attract barely a handful of spectators outside of key fixtures or finals.

St Edward’s University scholar and women’s football first team midfielder Riana Soobadoo, who spent a year at Brunel University in west London, believes it is all down to a massive difference in sporting cultures.

“Having studied in England, as well as being in Texas for about four years now, the mentality is completely different in terms of the competition and the culture amongst students,” she said.

“In the UK, the competition is less serious compared to the US where the tournaments are more structured, facilities are second to none and there are better quality players because you have to be at a certain level in terms of standard. In the UK they are more open as to who plays.”

‘Teens as young as 16, 17 know in their heads what college they want to attend, mainly due to their chosen sport’

So if the competition is more serious and at a higher level, the athletes – in whatever the sport – are correspondingly better. Students in America who have a scholarship to play their particular sport are referred to as ‘student-athletes’ because that’s how they are treated.

Soobadoo’s centre midfield partner Jessie Logan, from Miami, Florida, says: “When you are treated as a top-end athlete you don’t really lose focus because we are training more often. Also, because the drinking age is 21 over here, we are not turning up to games or training hungover.”

She added: “Another important point is if you are not performing in class, you will not play for your team, simple as that.”

Sport at university level in the US is so big, many college applicants overlook the academic attributes of a college and focus more on what sport they want to play and what is on offer to improve them as athletes.

“Teens as young as 16, 17 know in their heads what college they want to attend, mainly due to their chosen sport. To a certain extent, the academic side comes into play, but sports usually comes first over the classroom because many students want to make it as pros,” added Logan.

This goes hand in hand with how the teams are managed and looked after; in the UK the majority of the teams are run by either part-time coaches, or by the students themselves. This way there isn’t professional coaching, training sessions are not as intense or are sometimes cancelled – and more games are postponed due to a lack of players.

University coaching staff across the US are not only fully qualified but do their jobs for a living and earn good wages. Teams are managed much better by professionals who know exactly what they are doing and how to turn students under their supervision into better ahletes.

Soobadoo says: “Our coach has been with St. Edwards for just under ten years now. He is third in all-time career victories in the NCAA Division Two and in the top 15 in terms of winning percentage. If that wasn’t enough, I believe he won the Conference Coach of the Year Award ten times. So overall coaches in the US don’t mess about, and this is the main reason why many players improve.”

Considering how vast the United States is, there are only 32 NFL teams, so the status of college, and even high school, football is magnified. Millions of Americans do not have a local NFL team to support, but with about 80 universities in Texas alone many look to college teams to follow.

So what adds to the excitement on game day and what makes it the kind of spectacle sorely lacking in UK university sport?

Logan states: “There are so many college teams that it creates more local rivalries which adds a lot to the excitement. Many people who have already graduated from a particular university, no matter how old they are, will support its teams, which is a huge boost to us as players of the current generation.”

On game day itself, passionate atmospheres are generated, with people young and old from all social strata gearing up to watch a group of amateurs play their sport.

Game day is an opportunity to bring communities together and have a good time. Soobadoo says: “Many people pull out BBQs, various groups will be together drinking and it is just literally a party atmosphere, almost like a festival feeling. In the US it’s known as tailgating.”

However, with all this excitement comes big business and that is exactly what college sport is in America. Millions of dollars are generated from merchandise to ticket sales to advertising, rights and licensing, including deals with major TV channels such as ESPN.

In the UK there is nothing like this, you can’t imagine watching UAL men’s football 1st play Essex men’s 1st live on Sky Sports 1. The closest thing to university sport being televised in the UK is the annual rowing race between Oxford and Cambridge, but even that doesn’t get everybody’s pulses racing.

The actual sums of money involved are astonishing. It was reported that in 2013, the athletics department of the University of Texas, home of the Texas Longhorns, generated $165.7 million in revenue, and it has a partnership with ESPN worth $300 million over 20 years.

You can only imagine what this kind of money would do for a lot of British universities.

Soobadoo and Logan have their doubts. Logan says: “It could happen for the UK, but certain habits have to change, which brings it back to the drinking culture, this is a major factor, due to the law over here (US) you can not drink until you are 21, so we already have an advantage in terms of being physically fit.”

“British students are more focused on what they are studying, and sports teams comes after that or not at all” Riana Soobadoo

Soobadoo said: “Facilities and interest have to improve for it to work; with more interest comes more money for the university to potentially improve facilities and teams. Also, encouragement is important as well; universities or societies may need to do a bit more in order to persuade people to join a sport.”

This links into how British students go about their life. Soobadoo adds: “British students are more focused on what they are studying, and sports teams comes after that or not at all, whereas in the US it is more balanced.”

Team-mate Logan puts a lot of it down to the sheer size of the US. For instance, more of the UK population live fairly close to a professional football club. In America, the nearest pro-team can be hundreds of miles away.

“America is obviously much bigger than the UK and that’s why it works so well. You have many more universities, so competition is always fierce, whereas I don’t think there are nearly as many universities in the UK, which links into the lack of interest.”

UK sports are also less reliant on universities to produce talented athletes. They tap into the potential stars being developed at local clubs, while football, cricket and rugby teams nurture talent through their academies and age-group sides.

So could US-style college sport ever take-off in the UK? So much would have to change for that to happen, but if it ever did, imagine the impact it could make on UK sports.

The consent project: no means no

Why US universities have a sporting hold over their UK counterparts