In Conversation | The Pretty Reckless

The Pretty Reckless’ singer Taylor Momsen was infamous for her wardrobe and lifestyle choices, but the controversy seemed to blow over quickly when the world really saw how talented the 21 year old is.

The singer/songwriter has secured two number one rock albums with her band in the UK, and four years later remains passionate about her music.

Three months into the Going to Hell tour; dressed in black jeans and over sized sunglasses, Taylor met Artefact at Gibson Studios in London’s West End to talk about her journey to the number one rock chart with the album Going To Hell:

The band’s constructed of a range of ages, you’re not people who would be typically put together, how did you form?

I met Ben, our guitar player, through our producer Kato and he was in a band with Mark and Jamie at the time and I heard their band and loved it. I was a singer/songwriter looking to form a band and not just hire musicians. I didn’t want it to be put together, I was looking for the real thing.

When we met, Ben and I started writing songs together and just kind of immediately clicked and worked and I went ‘well fuck you I’m taking your band’ cause this is awesome, and I’m gonna be the singer and I’m gonna write your songs and you guys are gonna play and it’s gonna be awesome.

And It’s called The Pretty Reckless. Actually, he came up with the The Reckless and we didn’t have the license so we had to add a word and he said pretty at some point and we thought it was better than ‘The Moderately Reckless’.

How would you describe The Pretty Reckless’ image? 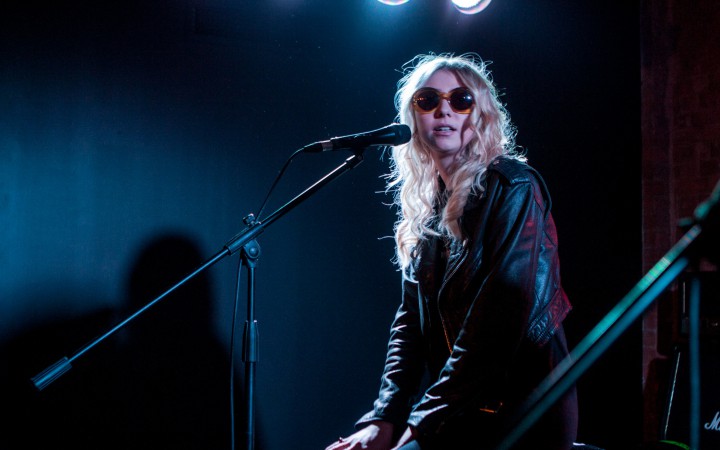 Our drummer describes it as ‘Homeless Chic’. That’s also what he calls his beard. There’s a lot of black, the music is displayed through the clothes as well. Fashion and music go hand-in-hand since the beginning of time. Look at Led Zeppelin or The Beatles for example, so I think [our image] has definitely evolved over the years – the band’s style – kind of as the music has.

So, at the beginning, I was wearing a lot of corsets and stripper heels and ridiculous shit. Now with the Going To Hell album, the cross with the arrow is the symbol for the record [and] has become very prominent in my stage attire.

I make all my own stage stuff; one of a kind T-shirts/dresses. [At Brixton Academy I wore a] sort of a vintage flag, union jack and I put a big cross in the centre of it ’cause, why not?

What made you decide on the use of religious imagery, which is also present in your first album?

So it comes out a lot in writing with metaphor and therefore you portray that in the image as well, but, I don’t think there’s a specific reason. It’s metaphor. It’s all metaphor.

Is there a particular song that means a lot to you through the lyrics or journey of creating?

All of them. Particularly Going Down, well no, all of them. [Going Down is] just the most current. In Going to Hell, the whole record if you listen to it front to back really tells a story: where I was at, where the band were at, where we all were individually and together at that period of time. It’s an actual album, not just a collection of singles.

We went through – no pun intended – hell making Going To Hell. I think you can definitely hear it in the songs. From a hurricane wiping out the studio in the middle of recording, I live in Lower Manhattan in New York and there was a power surge when the hurricane happened and all of lower Manhattan was blacked out.

So I wrote the song Going To Hell in my shit hole little apartment with 12 candles in the middle of a black-out in New York; whilst trying to rebuild a new place to record, so we got a song out of that.

Then at the end of the recording a family member, a very, very close family member to the band, to me, to all of us, passed unexpectedly. The record is dedicated to her and I wrote Fucked Up World after that and that was the last song we recorded for the record. So it really follows a journey.

Your stage presence is so natural, do you choreograph pieces or it spontaneous?

It’s different every night and I certainly would not say choreographed. We really are just a live rock and roll band. If anything goes wrong you can fucking hear it cause there’s no tracks. Our drummer isn’t playing on a clip track, there’s no anything it’s just the four of us playing. So, every night the songs change.

We time the solos and it’s at different times every night. Absolution is a song that has been at a different time every single night and we just kind of vamp until it feels right. It’s impossible to choreograph anything cause you’re just in the moment.

What’s your most rememberable gig experience? 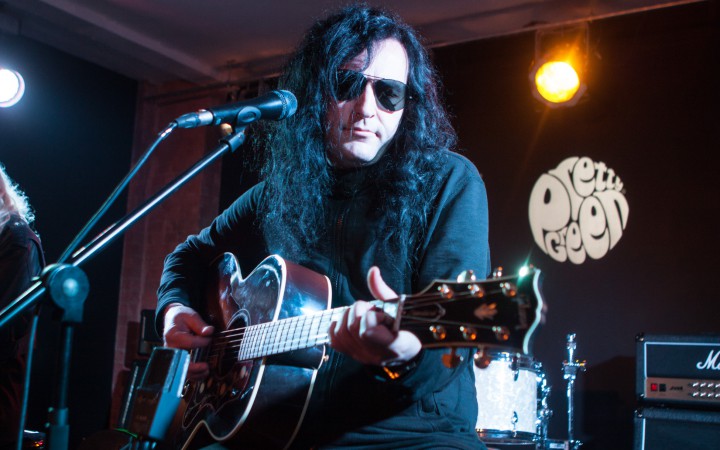 Well, first of all I’ve done a shit ton of gigs that have been awesome. So, it’s hard to pick just one but from this year is Sound Garden. We opened for Sound Garden in Quebec City to 95,000 people.

I don’t know if it’s the biggest [audience] but it certainly was the highlight because I’m the biggest Sound Garden fan so it was just awesome.

For the first three songs I sat there going ‘Oh my God this is the most amazing thing I’ve ever seen in my life’ the second three songs I was sat there just going ‘Jesus fucking Christ we suck’ and then I went ‘OK well they’re God so whatever.’

You’re well-known for not wanting fans to spend the whole gig video and taking photos, you told everyone at Brixton Academy to put them away and ‘live in the moment’, what’s your take on technology at gigs? Do you think technology ruins the live experience?

I do, I mean I understand, take a picture capture the moment for your scrapbook or whatever. But, standing at a gig with your phone up for the entire fucking set, what’s the fucking point? First of all, do you see all the other people holding up cameras? There’s gonna be a billion of them online so why are you doing it?

Be there with the show. You’re standing there and there’s this giant spectacle in front of them and they’re watching it through this tiny screen. It doesn’t make sense to me, watch television at that point. But you know, it’s a free world.

London is full of bands hoping to gain an international fan base like yours, do you do any work with independent or up-and-coming bands?

We have our good friends from Heaven’s Basement on this tour, love those guys, like literally they’re like my best friends. To be honest I’m not really familiar with a lot of new music, I don’t really listen to it.

I’m in the phase of going backwards on music and going into the very early phases of blues. That’s kind of more where my head’s based. The new music, with the computers, that’s just not really my thing.

So, I don’t really know a lot of new bands. The Staves, are they new still? I saw them on Jules Holland and they were incredible. Who else? Jake Bugg has kind of a cool thing happening I guess it’s very throwback which is cool. The newest record I bought was King Animal by Sound Garden if that helps?

Both albums Light Me Up (2010) and Going to Hell (2014) peaked at number one in the UK rock album chart, what would you like to achieve with The Pretty Reckless?

There’s always up, and then there’s down. I think that the goal is to just keep making music and for every record to be better than your last record and grow individually as musicians and a band together and see where that takes us.

Good songs, that’s the goal, and to beat what you did before. So the next piece of work will be better than Going To Hell, however long that takes to make.

The Pretty Reckless’ third headlining tour Going to Hell finishes in 2015 and the band are currently working on an acoustic album.