Santa is essentially the Obama of Christmas – he gets young people excited about the future, and then ultimately disappoints. So it’s time for someone different, someone traditional. Maybe like a Spanish shit log, an Alpine belly slitter with a big foot, or a fashion-obsessed hell cat.

To take some of the undeserved limelight off of Saint Nick, we take a look a some of Christmas’ ensemble cast… 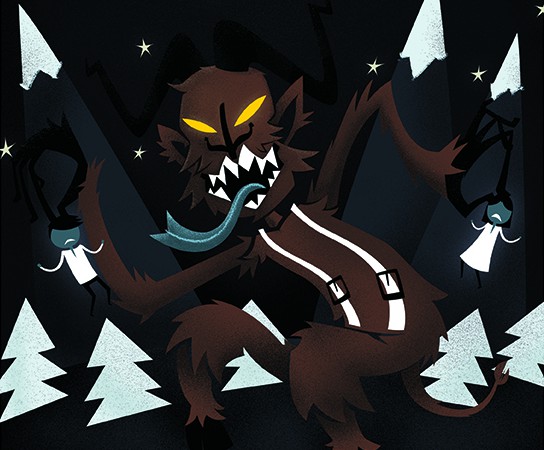 Across the Alpine countries children cower in fear. They’re not excited to see a fat man squeeze down their chimney. They’re scared, because Krampus the demonic goat creature is out to get them.

Often pictured carrying a bag of children or looming over naughty kids, this ancient beast, who originates in German folklore, is here to remind everyone to be well behaved. If you’re not, he will take you, and you might end up drowned, eaten or in hell.

The 20th century saw persecution of the anti-santa, with Krampus banned in Austria in 1934 and Krampus is an Evil Man government pamphlets published in 1950.

Now, he’s made a comeback, with an annual Krampuslaufen – where drunk people dressed up as him charge around the Alpine landscape intent on scaring children.

Perchta comes from the same homeland as Krampus, but her speciality is belly-slitting. On her feast day, December 31, if people don’t eat a special meal of fish and gruel, she cuts them open and stuffs them with straw.

Dating back to the 10th century, Perchta has one abnormally large foot and wanders around the Bavarian countryside during the twelve days of Christmas, either rewarding children and servants with a silver coin, or slitting them open.

While a Christmas kitty might sound like a lovely furry ball of joy, Jólakötturinn is far from an innocent cuddly fluff-bundle. In Iceland, if you finish all your work before Christmas you get to buy new clothes, but if you don’t, it’s time to start bricking it.

Jólakötturinn preys on those without new clothes, eating them up and leaving little to bury. Children are also told that if they help the needy, they might be spared from a grisly fate.

Grýla and the Yule Lads

Yule Cat isn’t the only Icelandic monster to be wary of – there’s also the feline’s owner Grýla. An ancient giantess who lives in the mountains of Iceland, it took until the 17th century for her to be linked to Christmas.

Previously, she used to come out of her mountain throughout the year to make her preferred dish of naughty children stew, but now she waits until Christmas time to punish those who misbehave.

Her own children, the 13 ‘Yule Lads’, are a little nicer, leaving gifts or rotting potatoes (depending on the good or bad behaviour of the child they’ve visited) in their wake.

Currently the world record holder for ‘world’s biggest birthday party’, this guy, who’s said to originate in Israel, is what Christmas is technically all about (who knew?).

The idea of a winter solstice festival predates his birth and gift-giving was inspired by the Roman Saturnalia (a December festival held to honor the god Saturn), while lights, greenery, and charity were taken from the Roman New Year festivals, and Yule logs originate from Germanic feasts.

Unlike many of the other characters on this list, Jesus doesn’t kill children. In stories about him, he has magical powers of healing and transfiguration, and is immortal.

El Caganer, that is, ‘The Shitter’, appeared sometime around the 18th century in Catalonia as a character who chose the wrong time to drop his trousers.

He’s shown in many nativity scenes mid-defecation while the rest of the nativity focuses on the new-born baby.

Children are often tasked with finding the bare-buttocked pooping peasant in nativity scenes, where he’s generally hidden away. It’s like trying to find a needle in a haystack, but shitter. Literally.

Also filed under poop-related Spanish Christmas fun times is the Tió de Nadal, a log that you must hit until it plops out some presents. Oh and sometimes it urinates out water. The best way to guarantee a present is to sing the traditional song to it which translates as:

An uncomfortably dark-skinned, red-lipped creation of yesteryear, this Dutch character has come under criticism for being rather racist. Helping out Santa, Zwarte Piet (Black Pete) abducts naughty children and gives out presents to good ones.

Over the past few decades, there’s been growing criticism over the tradition of ‘blackfacing’ to dress up as him, with protests held in Amsterdam in 2013 against the character.

More recently, a fight on November 15 (between those in favour of changing his look and those against a change) led to the arrest of ninety people.

The ‘Whipping Father’ originates from France and Belgium and, as the name suggests, goes around whipping naughty children, as well as sometimes giving them coal.

According to the story, an innkeeper captured three children and their mother in the year 1150 as he believed they were wealthy, and killed them for their money (by drugging them, chopping them up and putting them in a stew).

Saint Nick somehow learned about this crime and resurrected the children, making the innkeeper, Père Fouettard, his servant.

In the ’30s he was introduced to the US as ‘Father Flog’ or ‘Spanky’, but he never really took off. Funny that.