In a world where wastage is a major problem, eating your Christmas tree is a beautiful way to reduce it by actually turning it into a delicious four-course dinner. No, you neither boil it nor fry it. You actually do not need to cook it at all. Although you might want to start by removing the baubles.

If you are wondering what it tastes like, imagine the strongest citrusy, spicy yet fresh aroma you can think of. The great part of this particular taste is that it blends really well both with sweet or savoury dishes, and it feels like a magic in combination with ginger and juniper.

Besides, the beautiful taste of evergreens, there is also a lot of nutrients that can be found in pine and spruce tips and nuts. Spruce needles are very high in Vitamin C, carotenoids, chlorophyll (which help tissues to heal), and minerals such as potassium and magnesium. Moreover, they help balance the sugar level in the blood system and draws out poisonous metals present in our bodies.

If you are not sure about adding spruce or pine needles in your diet, you might want to consider pine nuts, which are an exceptional source of Omega 6, Vitamin E, manganese, potassium, calcium, iron, magnesium, zinc and selenium. Furthermore, pine nuts are gluten-free, so, can be introduced to the diet of gluten-intolerant persons.

Julia Georgallis is the founder of The Bread Companion (TBC), a nomadic bakery that travels around the world to encourage people to bake their own bread, and she is also the brain behind the event How To Eat Your Christmas Tree.

She started using evergreens in her dishes a while ago and decided to show the world the giant ingredient that has been sitting in their living rooms for a while now.

“The idea came from wanting to make people aware of waste, but through food. The most important thing is that it’s delicious because it’s food and it has to be,” she told us. “You want it to be a nice experience, you don’t want to just think about wastage, it’s got to be tasty!”

Julia allowed me into her kitchen on a sunny Friday just a couple of hours before her guests came for dinner and showed me how to mix pine and spruce with salmon, couscous, lamb and even ice cream. 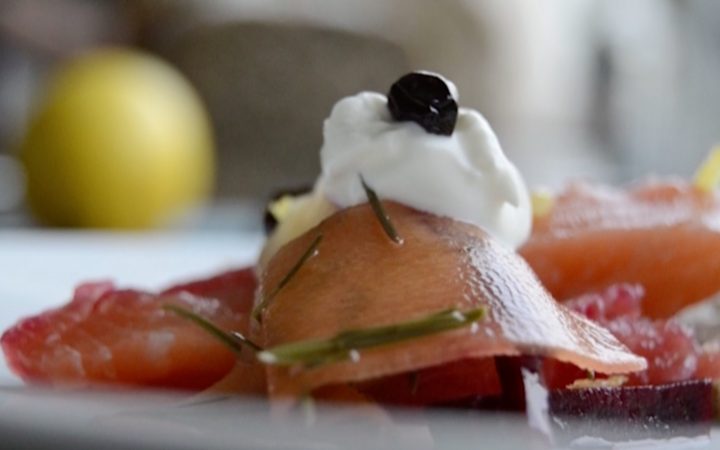 The dinner starts with a beetroot and spruce cured salmon accompanied by spruce pickled vegetables, crème fraiche and homemade rye bread. The beetroot and spruce marinade covers the fish for 24 hours in the refrigerator, which gives it an unbelievable hot pink shade and also a very particular taste.

‘It was inspired by the Nordic kind of cooking. I used fir, Noble fir and Nordmann fir, because these two evergreens have a very zesty, apple-like flavour.”

After your senses have been awakened by the fresh and savoury salmon, it is time to challenge yourself with a dish you most probably have never tried before: lamb and Retsina tajine with a side of mushroom with a pine-crust, pine-smoked cauliflower, spruce tzatziki, pine couscous with pomegranate, mint and sultanas.

The sharpness of the pine-smoked cauliflower goes amazingly well with the sweetness of the pomegranate and sultanas, which complements the lamb and the mushrooms. 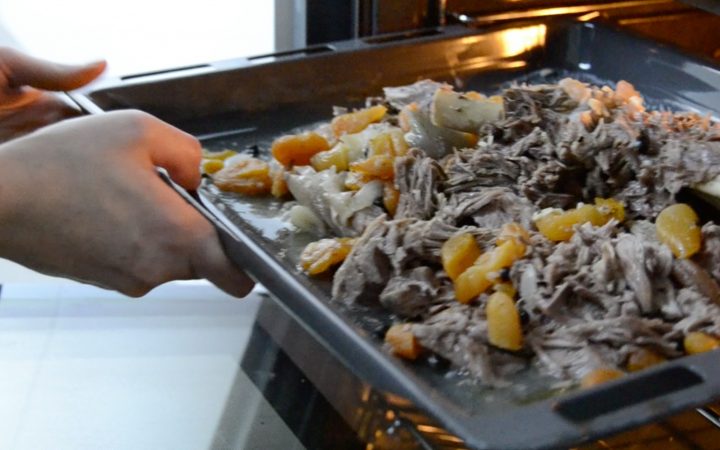 ‘Quite a lot of these recipes I sort of took mainly from two places. From the Southern European Middle East, because they do lots of things with pine, and also Nordic countries, so the pistachio is quite Scandinavian.’

The star of the menu is definitely the spruce and ginger ice cream, which originally comes with an orange and pistachio shortbread; however, the nomadic baker offered me a very tasty brownie with pine nuts along with the ice cream, which I could not help myself but finish it all. 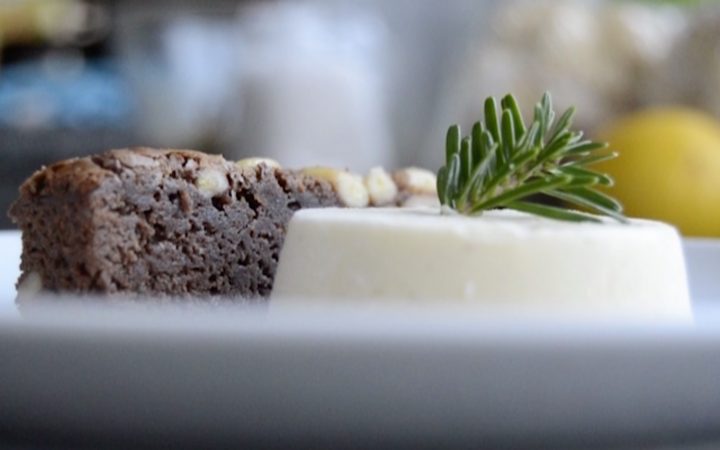 The dinner ends with a couple of slices of Cornish yarg accompanied by douglas fir membrillo, creating an explosion of strong yet amazingly good different flavours.

Julia usually adds a few oat cakes to the dish to temperate the powerful taste, but the mix is so beautiful on its own you can even have it without it as a snack.

At the end of the evening, two important targets have been achieved – contributing to reducing the waste of trees after the winter holidays and making amazingly tasty food.

If your Christmas tree seems delicious to you already, try out the two recipes below.

The rest of them will be out later this year in Julia’s cookbook, and while some of the recipes cannot be fully disclosed, but you can find out more by checking out the video.

This recipe is inspired by the traditional Italian dessert ‘torta di pinoli e cioccolato’. The oils in the pine nuts make this brownie very moist and fudgy and the creamy, nutty flavour works well with chocolate.

All images by Charlotte Layton