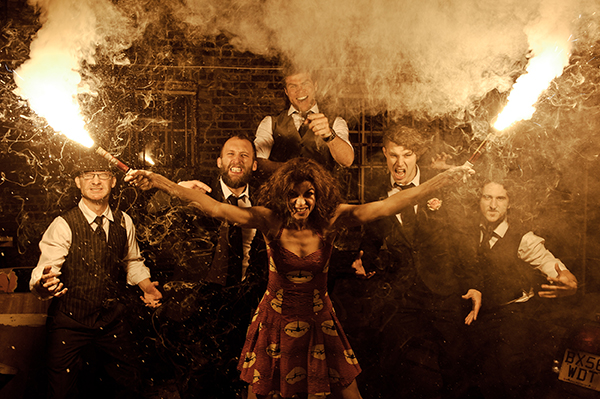 Do you want to come to the BAFTAs with us?”

“Fuck yeah! What should I wear?”

The anticipation in the Uber from work to Mayfair leaves me with one thought: I really need to poo.

The paps and fans are ready and waiting by the red carpet entrance, anticipating the celebs arriving for their post-ceremony dinner and boogie.

Bojo, the security man with the shitty job of guarding the tiny back door located on Park Street, welcomes me to the Grosvenor House Hotel.

That’s that, no one checks my bag and I am thrown into the unglamorous world of backstage.

Nat Tena, the insanely-talented whirlwind lead singer and accordion player, has had the flu for the past week and attended a Spanish film festival each weekend for the last month.

Known as Tonks in Harry Potter and Osha in Game of Thrones, Nat was nominated as Best New Actress for her role in Spanish indie film 10,000km – shortlisted as Spain’s contribution to the Oscars but didn’t make the final cut.

Politics, I begin to understand, has as much to do with award ceremonies as talent and hard work. On a side note 10,000km is a fabulous film: a most modern love story featuring sex scenes with a very handsome man.

The bottom line is that the rock ‘n’ roll backstage life I had imagined was, in reality, a pretty tired one.

Three types of beef and a lot of gravy is served to all but Tom Wilson, vegetarian and very clever bass player; wine and whiskey is guzzled as WAGS chat and the band boys iron.

Angus Moncrieff, the cherry on top of the Molotov Jukebox cake with his astounding trumpet-playing skills, announces his engagement to Gudrun. Congratulation, guys!

Adam Burke, manager, producer and seriously talented guitarist who makes women blush with his fast and competent finger tips, guides us on a walk to have a look at the grounds before the big dinner starts.

The venue is mind-blowing; the table decorations are lavish and inspired by the Best Film nominees: a Disneyland for grown-ups, The Grand Budapest Hotel-themed tables are especially stunning, piled with pretty in pink Mendl’s patisserie boxes.

Press aren’t really allowed to the after party, it’s meant to be a free zone for the celebs to go wild.

At some point, the bar opens and out I bolt from the yellow backstage box like a heat-seeking missile and return with as many glasses as I can carry.

I have a weakness for free and bottomless champagne bars. Sexy drummer Rami Sherrington helps me carry. He’s used to juggling many things at once – how the fuck does he stomp and beat like that?

The band arrived at 4:30pm for a soundcheck, and a bit before 11pm, they finally begin to get ready for the show.

Nat, although now an experienced event-goer, hasn’t brought any hair products so we improvise by nicking the table anemones and I donate my hairpins.

This is a band that is genuinely ‘in it for the music’ – image and fame are never considered. Having sneakily heard some of the news songs from their upcoming EP, to be released this summer, I’m as excited as always to boogie on down tonight.

At 20-past-midnight we leave the backstage room now scattered with full, half empty or empty champagne glasses.

As the band climbs the stage, I prepare to dance. Seriously drunk now, I move my limbs for pretty much the complete hour of Molotov Jukebox’s distinctive sound and blend of genres. Happy. Tropical. Gypsy.

The celebs, the ‘fashion-bloggers who model on the side’ with rich boyfriends, and film crews let their hair down and surrender to Molotov Jukebox’s carnivalesque seduction.

Press aren’t really allowed to the after party, it’s meant to be a free zone for the celebs to go wild. Incognito, I sexily sway in the midst of the glamorous crowd, guarded on either side by angry bouncers making sure we don’t dance with drinks in hand.

Drunkenly I tell John Giwa-Amu, a member of the committee who let me bum a cigarette, how to do his job.

He asks me: “Have you seen the movies?”

“Ermm..no”, but nonetheless I feel the urge to tell him why certain people win and others don’t. I am sure he appreciated my lessons in award ceremony politics.

I stumble home at 3am to my boyfriend who asks how the BAFTAs were. I answer that I don’t really know. My focus was on hanging out with some pretty fucking talented musicians and to dance my socks off.

I didn’t wear socks but I broke my shoe. My favourite part of the evening was the warm-up sing-along session in the yellow box room and this Vine produced from backstage boredom during the long wait for the band to go on stage.

For you unglamorous lot who couldn’t make it to the BAFTAs, Molotov Jukebox will be playing a Boomtown warm up at the Brixton Electric on March 21.

Get your goddamn tickets now! Be prepared to bounce in your own sweat. Molotov Jukebox don’t need the pomp and splendour – the award was always theirs.