Revolutionary new takes on urban food self-sufficiency that break the usual tedium of homogenised gentrification are happening in cities around the world, as our concrete landscapes turn into rooftop farms.

Radical experiments are being carried out in how we can feed ourselves in densely populated cities by using space in different ways.

A creative, self-sufficient economy is growing that aims to build a carbon neutral food system within cities that reduces energy and food waste.

Urban farming and self-sufficiency isn’t a new term or idea. London, like many other cities, has plots of land (usually in derelict areas) that urban farmers and communities call home, offering a more creative and engaging solution to urban farming that tries to go beyond inner-city allotments where potatoes and carrots are grown.

These communities want to engage people with sustainability in a way that is enjoyable, local and relevant, giving them the confidence to grow and source food within their city limits.

Cuba experienced a similar revolution in the late 1980s as the communist island started to become economically isolated after the fall of the USSR.

Cuba entered an economic crisis of unprecedented severity as trade was cut off from the Soviet bloc in 1989. Austerity programmes and goods rationing were deployed across Cuba as a food crisis followed.

But instead of Cuba allowing itself to fall into a third-world cycle of food systems and handouts, the country rapidly changed its farming methods.

Havana now has a unique agricultural infrastructure that produces food for human and animal consumption.

It’s a self-sufficient model that other cities are also trying to adopt. Havana’s self-sufficient revolution is manifest on many different scales, from balcony garden plantations to large fields that produce fresh food as part of the city’s greenbelt.

Other cities are adopting similar models, with Vancouver among those currently developing new standards for self-sufficiency. The City of Vancouver’s Food Strategy was launched as part of a ten year vision for policy, planning and community organisation.

According to their website, “It is a plan to create a just and sustainable food system for the city. It builds on years of food systems initiatives and grassroots community development, considering all aspects of the food system, from seed to table to compost heap and back again.”

“A sustainable food system is essential to nourishing a healthy city,” says the City of Vancouver, and now London wants to follow by creating its own self-sufficient communities in a turbulent economic climate.

The collapse of Northern Rock in 2008 was one of the first victims of the impending financial crisis. The crunch left many in a hard place after five years that rocked UK banking.

Northern Rock didn’t just signal the start of a continuing crisis in banking, it also had many repercussions for thousands of workers with low job security positions, in both the public and private sector. A harsher economy for some lead to many workers and creatives tightening their belts, complaining about how wasteful our society is with food.

The idea of being self-sufficient became attractive to many. It provided a platform to reduce the millions of tonnes of wasted food thrown away every year. It also acted as a two-finger salute to the multinational corporations that had a part to play in the credit crunch.

Huge steps have been taken to introduce urban farming and self-sufficiency in London, something very evident in one of its most creative boroughs, Hackney.

Projects such as FARM:, Growing Communities and Growing Underground have cropped up (pun intended) in recent years as part of a bid to provide sustainably grown food the whole year round.

They began as small prototypes of communities being less reliant on rising fuel prices for transporting fresh food, and resembled a demand for consumers wanting more organic produce.

As with Cuba, these kind of projects began to appear during a harsh economic climate. But unlike Cuba, it wasn’t because of an economic and social doctrine that fell, it was the credit crunch.

The farm originally won a competition run by Hackney council to find uses for empty shops in the area, under an agreement they received a year rent-free in the disused space.

FARM:shop opened in 2011; housed in a once derelict shop space, the concept aims to encourage farming in the city and involves inspiring Londoners to grow their own food, fabric and medicine with the potential aim of selling it in the FARM:shop.

The food produced within the farm is then sold in the cafe below, including produce from the fish farm, chicken coop and allotments.

The project is operating on a modest scale at the moment, but they have plans to build a 3000 square metre farm on a London rooftop.

The current enterprise isn’t the solution to minimising the capital’s consumption of food miles, but the proposed project would be capable of growing more than 200 tonnes of vegetables, fish and mushrooms with no food-miles and zero waste.

If this is approved, it would be the largest self-sufficient rooftop project in the capital. It will be the closest thing to the farms in Gotham Greens, New York, or Havana, that have the potential to feed entire communities.

Growing Underground is a slightly different project, that utilises an urban space that can’t be used for many other things – a former air-raid shelter and tunnel 33 metres below Clapham.

The project uses a hydroponic system and LED technology to grow sustainable and fresh food all year round beneath London’s roads. 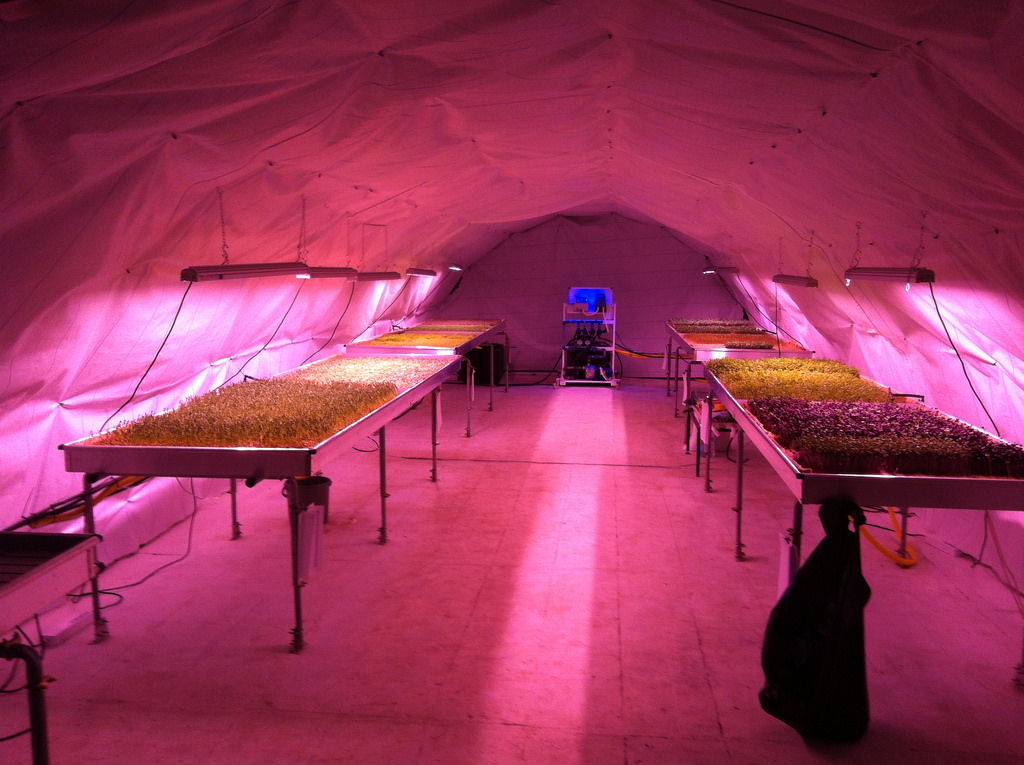 “We see our role not to make Hackney self-sufficient but to give local people access to great, sustainable, organic food that is as local as possible… meat and veg from near to London, grains and pulses from elsewhere in the UK, fruit that is grown in Europe rather than New Zealand or Chile.

“Most of the produce we sell through our box scheme and at our farmers’ market comes from local farmers, mainly within 60 miles of London, who have access to more land and can grow bigger volumes,” she explains.

Despite Growing Communities and other projects trying to give something back to the community in this self-sufficient revolution, they also face economic constraints.

“We grow salad partly because it is highly perishable but also because the value is comparatively high, a kilo of potatoes cost about 25p at the farm gate, whereas a kilo of organic salad is worth over £10,” explains Richenda.

On the subject of councils and developers favouring residential projects instead of community ones, Richenda says urban agriculture is affecting urban architecture.

“Some commercial and domestic buildings are incorporating planting into their designs to help regulate temperatures, attract beneficial wildlife and look good. If they also produce food, that is generally seen as a bonus rather than a primary aim.”

Does she believe it’s impossible for parts of London to become self-sufficient?

“I think the main reason that it’s impossible to create a self-sufficient community in the city, if it’s not too obvious, is that the space is all taken up by buildings. You need a lot of land to grow food and the yields and financial returns from food growing are tiny – and just can’t compete with the returns from building offices, flats, shops etc.” 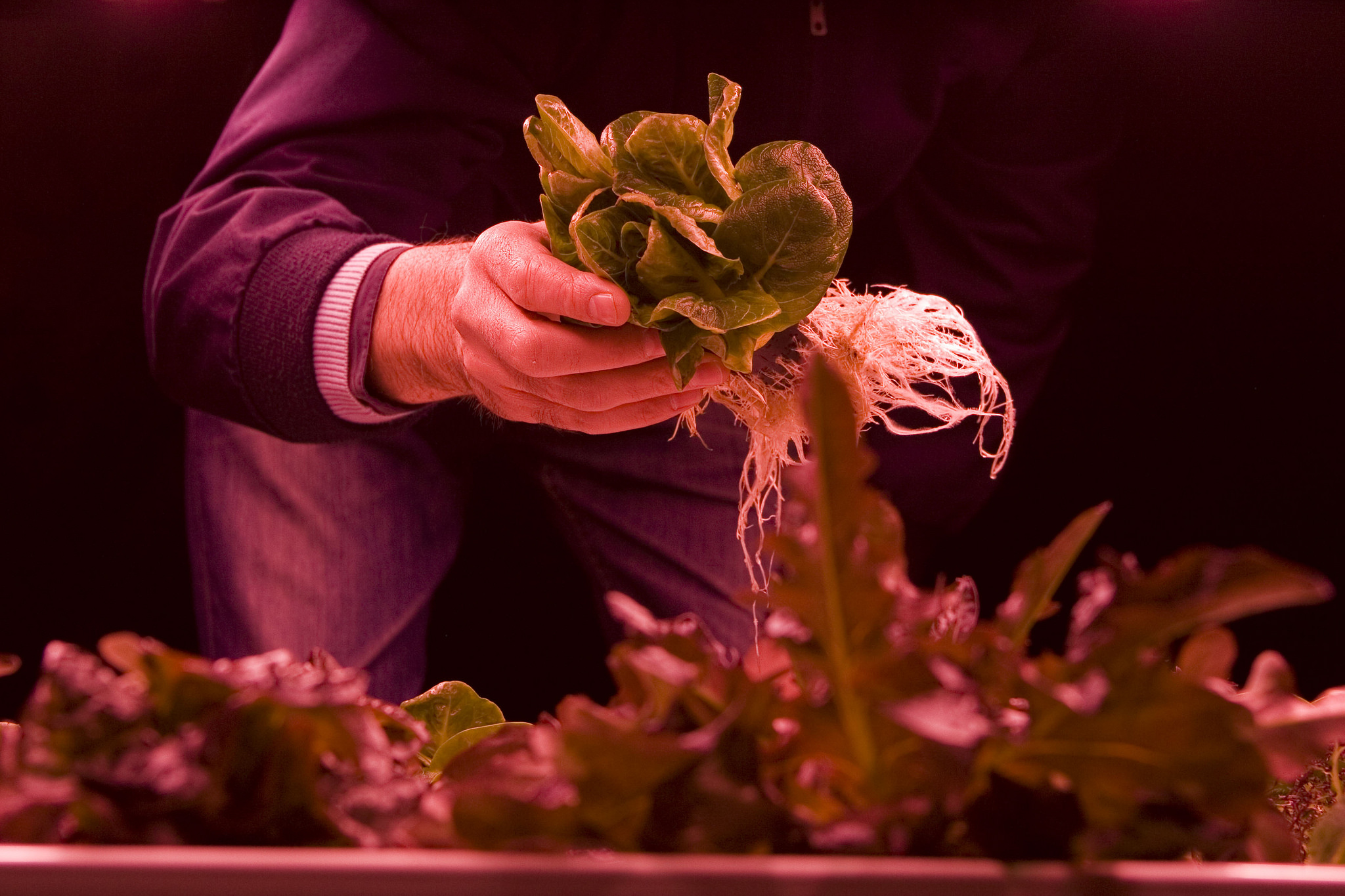 Instead of this turning into the old argument over developers and gentrification, creative projects are springing up everywhere to raise awareness for self-sufficiency. Hackney WickED is one such example, an enterprise that runs an annual arts festival in Hackney, aiming to support local artists and self-sufficiency.

Catrina Stewart, co-founder and partner at architectural design studio Office S & M, told Artefact that she’s developed an “adventure puzzle game that look[s] at themes of self-sufficiency and the use of slightly unusual renewable technologies.”

Working together with the team at State of Play Games, they have developed a ‘handmade’ computer game called Lumino City. The characters go on journeys of discovery, trying to generate energy to power the city, reduce waste and give users insight into living in a self-sufficient environment.

Steve Rypka, from environmentally responsible design company Green Dream Web told us: “It is imperative that we improve our ability to grow healthy local food for many reasons. I think it is not only possible to do it, but an imperative going forward in the face of climate change, loss of biodiversity, water and soil issues etc.”

Although London and other Western cities are unlikely to face a trade embargo like Cuba, the plan for urban agriculture and self-sufficient communities should be high on the agenda.

Self-sufficiency offers food security, and that’s something to consider in a future where oil prices and war may affect our buying powers.

The magic’s in the make-up!