Let’s talk about mental illness in the black community

Whenever issues in Britain’s black community are discussed they usually revolve around gang violence, knife crime and the over-representation of black men in British prisons.

However, there’s another issue facing the black community that is rarely discussed but is equally important – mental illness is plaguing a large number of black people in Britain and they are being forced to suffer in silence.

I’m from a Nigerian background and whenever I go back there and visit mentally ill people and it saddens me. They are simply referred to as “mad” and are ostracised from the community.

It’s interesting to find that this stigmatised attitude towards mental illness is not just confined to Nigeria, but seems to be also prevalent in the black British community.

The reason this is such an issue is because, generally in the UK, black and other ethnic minority groups are most at risk of mental illnesses.

According to the Mental Health Foundation, Afro-Caribbean people are more likely to be diagnosed with schizophrenia than other ethnic groups.

It’s also worrying that Afro-Caribbean people are more likely to enter the mental health services via courts and police sanctions rather than through their own discretion.

The question is that with a considerable number of black people in the UK at a considerable risk of mental illness, why does the community not talk about this?

Depression sufferer Nina* offered to share her story with me. Nina was diagnosed with clinical depression at the age of 11, and she told me that “mental health is ignored time and time again, especially in the black community.” 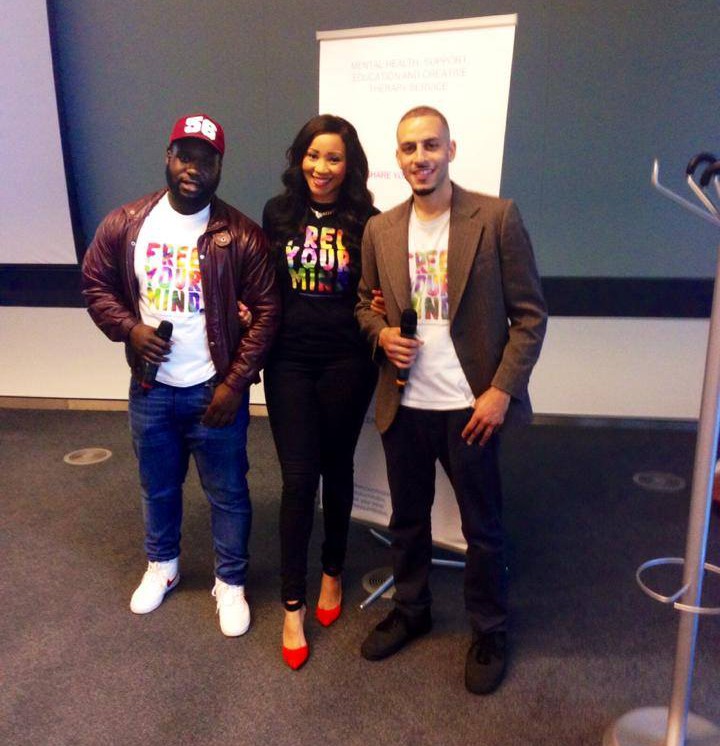 Members of the Free Your Mind charity [Ella Jukwey]

She believes the reason for this is that there is a false sentiment that black people do not go through mental illness. Nina said that her mother made the following comment when they visited the GP: “Us black people don’t do stuff like this.”

Another person who reached out to me was Jay, a Londoner. Jay’s partner had been diagnosed with personality disorder and clinical depression. Jay echoed Nina’s point, saying that people in the black community had a “get on with it” approach to mental illness as opposed to sympathy.

According to Nina, the image of black women as strong matriarchs did not fit in with the idea of them having mental illness, which is seen as weak and contrasts with the formidable stereotype of black women.

Nina also said that when at counselling she gave her African surname and she was treated like a “phenomenon”.

When she called the mental health nurse the first time she was asked to repeat her name and state her ethnicity. She was treated like an oddity because the mental health institution was not used to treating black people.

How those in the mental health services treat black people is also an interesting area to look at.

If the mental health service is not perceived as a welcoming institution for black people, this will discourage sufferers from admitting that they have a problem.

Jay shares a similar view, that black mental health nurses in particular were not welcoming. “Both male and female nurses were cold, rude and seemed annoyed the entire time,” he complained.

It seems a combination of factors have resulted in mental health being a taboo and untouched subject in the black community. And although we live in a multicultural society, racism still exists to an extent.

There is the notion that black people have to work harder, so admitting that you’re suffering with mental illness will put you at a further disadvantage.

Just as black women are affected by the strong matriarch and sassy female stereotype, so are black men expected to be tough, and not show any weakness whatsoever. Hyper-masculinity stifles emotion, which can lead to mental illness.

Religion is also a prevalent theme in the black community. Those who are staunchly religious will seek help through prayer as opposed to going to mental health services.

However, attitudes towards mental illness are changing. People are starting to talk about it more, and it is becoming harder for the issue to be ignored.

Someone that believes that progress is being made is Natasha Benjamin, the founder & managing director of Free Your Mind, which is a support group focusing on victims of domestic abuse and those suffering from mental illness.

Natasha acknowledges that being black and mentally ill is seen as a taboo but adds that the situation is changing. “Things are getting better, there are more campaigns and more activists than ever talking openly about mental illness. I myself talk about it openly in a blog and encourage others to do the same,” explained Natasha.

Popular blogger Mr Exposed tackled depression on his blog. He candidly wrote about his experience with depression and brought the discussion to light.

The series has Cecile going for a stroll with her subjects. Simone asks why signs of depression aren’t widely publicised. Shane, another participant in the series discusses mental health in the black community. He reiterates that depression is a taboo subject, despite being prevalent in the community.

With the conversation about mental illness in the black community finally starting, the stigma is gradually lifting. The more it is talked about, the less it is swept under the carpet.

With more bloggers and filmmakers tackling the issue, thankfully the idea of being black and mentally ill is no longer becoming a strange thought.

Mental illness in the black community is slowly but surely becoming more of a talking point. According to the mental health foundation, one in four people will be affected by mental illness this year.

Traditional attitudes and stereotypes are starting to wane. The necessary conversation can begin when it is understood that mental illness has no colour.

* Nina’s name has been changed at her request.