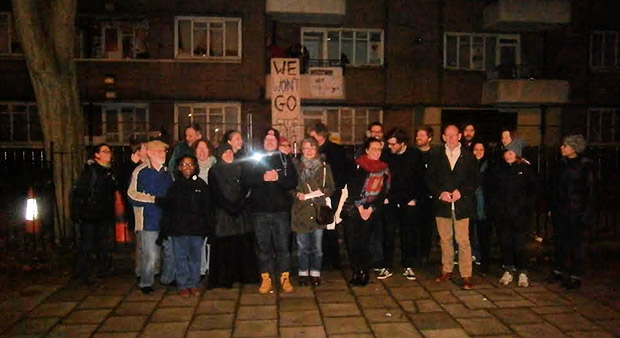 Activists have vowed to continue their occupation at the Guinness Trust estate in Brixton in protest at plans to redevelop it as a mixture of social and private housing.

Some residents believe that the Trust, a charitable housing association, is seeking to cash in on rising property prices in London, with the SW9 area currently undergoing gentrification.

The Trust, which has more than 60,000 properties in its nationwide portfolio, strongly refutes it has any motive other than working in the best interests of its residents in Loughborough Park.

Local protesters have been joined by supporters of Occupy UAL, which was originally set up to protest against foundation course cuts in higher education, as well as other activists.

Former student Jade Morrison, 20, says: “We are not leaving the occupation until we witness change, we will continue to occupy the building until we get the flats back. We need more people involved from all across London.”

Another protester, who preferred to remain anonymous said: “The Guinness Trust cannot stop us because this is not a small matter. We’ve been living here for more than 10 years. There are young children in some of these flats, they have no other place to go.”

The Trust has yet to be granted planning permission by Lambeth Council for the next phase of regeneration. In the meantime, empty properties have been let to Camelot property guardians, who can asked to leave at three weeks’ notice.

Loughborough Park had around 390 flats rented to secure tenants. As people left the estate, they were replaced with tenants on agreements similar to those used for private rented accommodation. Legally, these tenants do not have to be rehoused by the Trust.

In late April, the Guinness Trust released a statement which said: “We are providing 487 new homes for social rent, affordable rent and shared ownership at Loughborough Park – none of which will be for outright sale or for rent at market rates. All existing tenants with secure tenancies will move into homes in the new development and will continue to pay social rent.

“We understand this is a difficult time for the 20 assured shorthold tenants and have offered them a range of financial and housing support. We’ve been clear from the outset they would not be entitled to be rehoused when the site was redeveloped.

“They agreed to this when they moved in and we’ve given them more than a year’s notice. We are also assisting them with nominations to other properties across our national housing stock, including in London, and continue to be available to meet with them if they wish.”

Have a read of The Trust’s blog to stay up-to-date with the organisation’s progress.

The future of Brixton