Cycling in London gets safer 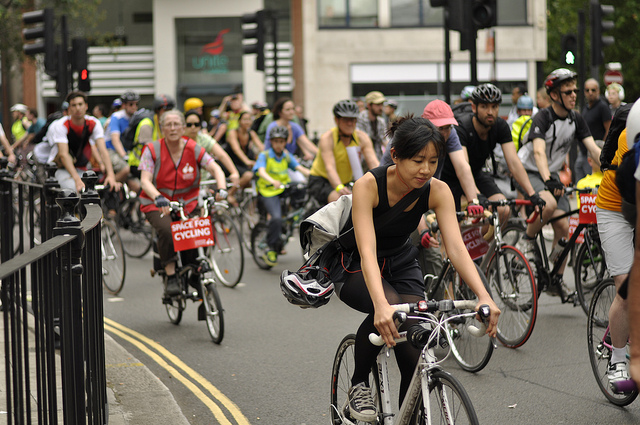 New figures released by Transport for London claim that, contrary to popular belief, more people are cycling in London than ever before.

The BBC reported that statistics provided by TfL also showed that 432 cyclists were either injured or killed on the roads last year, the lowest number since records began.

This new statistic was hailed as encouraging by the government; Simon Wickers, a traffic management officer said: “The situation has improved significantly over the last few years.

“The new design for the cycle super highway means that cyclists may be segregated from other road users and have now got their own lanes and various signals to pay attention to,” he told Artefact.

New concepts such as two-way right turns and traffic signals implemented by TfL are said to be an improvement, but it is important that cyclists abide by these new rules.

“Things are improving, as the injury rate is currently lower than before, but there is still a lot of work to do,” said Wickers.

“TfL are working on 10mph speed limits in certain boroughs, which certainly benefit cyclists, but in terms of how appropriate they are in enforcing these laws is somewhat of a challenge.”

Campaigners are demanding safer cycling conditions, but Wickers explains that it is important to consider both sides of the argument: “TFL have to balance other road users’ as well as cyclists’ demands.

“Taking away a certain amount of lane space from other road users, which they have done, is going to cause significant changes.

“London has very dense traffic so it is difficult to change road conditions. A big portion of the increase in traffic in London is by ‘white van men’ because the economy is improving, which means lots of businesses are using the roads.”

The Mayor of London, Boris Johnson, has introduced many initiatives to make cycling in London more compelling to the public by implementing new laws to make roads safer for cyclists.

In 2014, Johnson announced plans to “make London go Dutch” by making three London boroughs become “mini Hollands”, but not everyone is sure that this plan will change road conditions, as this video demonstrates:

The government is working to put in place appropriate infrastructure on London’s roads in order to improve road safety for the increasing number of cyclists.

Following the death of three cyclists in 2015, Scotland Yard was prompted to take action, and more than 600 police officers were deployed at 166 key junctions during rush hour.

The police approached those who were seen committing traffic offences, which led to more than 13,800 fines being issued.