Last month I was given the chance to grace the red carpet for Sacha Baron Cohen’s new movie, Grimsby.

Being given the chance to walk along side some of the actors whom I binge-watch on a Sunday evening seemed somewhat dreamlike. It was electric and filled with so much energy.

Crowds of fans waving their hands in anticipating for an autograph from pretty much anyone.

The atmosphere was electric, with all that’s going on, along with the constant flashing and sound of camera shutters, it was most definitely a night to remember. 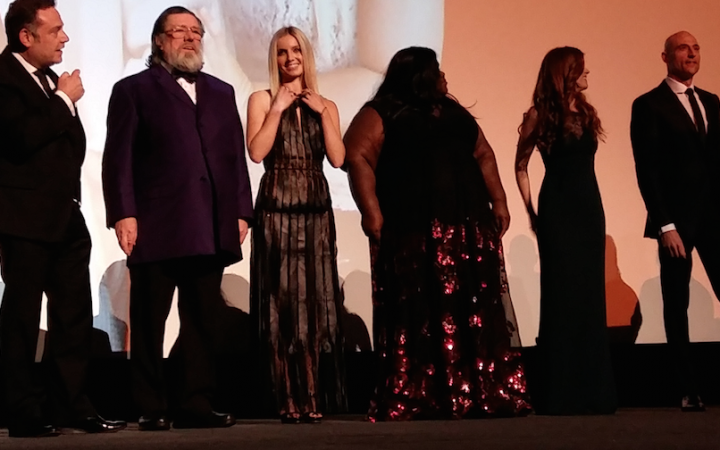 The cast line up at the press call after the premiere (including L-R, John Thomson, Ricky Tomlinson, Mark Strong)

Walking the red carpet alongside world renowned celebrities is something but a dream turned reality.

I was standing shoulder to shoulder with the likes of Gabourey Sidibe, Sacha Baron Cohen, and Mark Strong.

The continuous shouts of fans, camera flashes and the not so subtle whispers of “who’s that? Are they in the movie? Who are they? Do we take their pictures too? Are they famous?”

Hearing these back and fourth questions of confused fans directed at us made the experience all the more exhilarating .

In a way this experience gives one a partial insight into what celebrities encounter on a daily basis.

With some celebrities  being more well known than others the constant questions must be embarrasing for some, but in the end it’s the experience that matters. 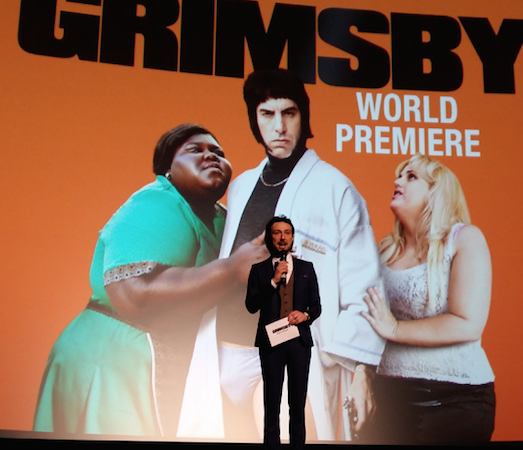 As the red carpet debut came to a sad end a little too soon, the security escorted us in from the cold in order to continue to watching the premiere from indoors in from of the gigantic cinema screen instead of remaining shivering in the cold.

We were ushered into our seats, mine thankfully at the front of the stage, giving me a better view of the cast when they finally came onto the stage just before the movie began.

The film is an action packed spy-comedy packed with sexual references, I would not advise you see it with the frail, elderly, and take heed of filthy language that could make a sailor blush.

Cohen and Strong play the Grimsby brothers Nobby and Sebastian who are separated at a young age, only to be reunited 28 years later due to Nobby’s persistent efforts to find his younger brother.

Nobby grows up as a poor man in the city of Grimsby with his 11 children and the most attractive woman in Northern Ireland as his girlfriend (played by the hilarious Rebel Wilson).

Mean while Sebastian (played by Mark Strong) works for MI6 but when he is wrongfully accused he will need the help of his idiotic brother whether he likes it or not, in order to save the world from stunning actress Rhonda George (Penelope Cruz)  who claims her aim is to save the world with a cure .

This comedy contains sexually active elephants, with the main characters in the most awkward and scarring positions of their lives, and constant gag-filled, stomach-churning moments.

This is a double over in laughter/ clutch your stomach in pain type of funny movie that is not to be missed, although people with easy gag reflexes have been warned.

By Emmeline Banks
6 Mins read
Bolton has a history of clashing beliefs and a fierce love for football, but the presumption that this is equal to hooliganism can be traced back to the 70s, as well as hooligan groups like Casuals United of 2009 who sought to revive the subculture – the new generation of fans are determined not to fall into the trap.
Reviews

By Margit Potsepp
3 Mins read
The King of Staten Island is a comedy-drama featuring Pete Davidson, playing a young man who lost his way in life. A movie loosely based on his real-life events.
Culture

By Livia Likurti
5 Mins read
A simple idea of just how an Albanian wedding works.