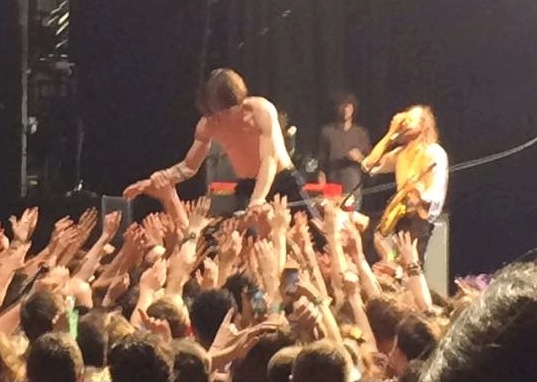 In February, Cage The Elephant rocked The Forum in Kentish Town – although main man Matt Schultz appeared on stage in a suit jacket do not be fooled, Matt is just as riotous than ever before. Crowd surfing in the first song meant that we were definitely going to be in for a bumpy ride.

Instead of sticking mainly to their latest album Tell Me I’m Pretty, Cage ensured that they played favourites from all four albums.

Second track of the night, In One Ear from their 2009 self-titled album sent the crowd into an erratic mental state. And from then on in, the crowd was a no-go area.

Flying cups and flying people are all I could see from standing at the bar. Fans dedicated to experiencing every element of a Cage the Elephant gig were waiting for a flying Matt to land in their arms.

The gig wasn’t all about mental antics and flying bodies though. The beautiful thing about Matt Schultz is that he means every word he sings.

You can see pain in his eyes and that’s a musician. Looking through the crowd it was clear to see that Matt has brought people along with him on his journey, sharing memories together through lyrics. It was truly touching.

When Matt sang face to face with several crying fans, that is when I knew that this guy really had it all.

Southern soul filled the room and a reminiscing atmosphere of blue polluted the air.

And of course, to stay true to his word, Matt finished the night by crowd surfing his way to the stairs, climbing up them and soaring through the air back into the sweaty pit roaring for him to jump.