Free university: Will that solve it? 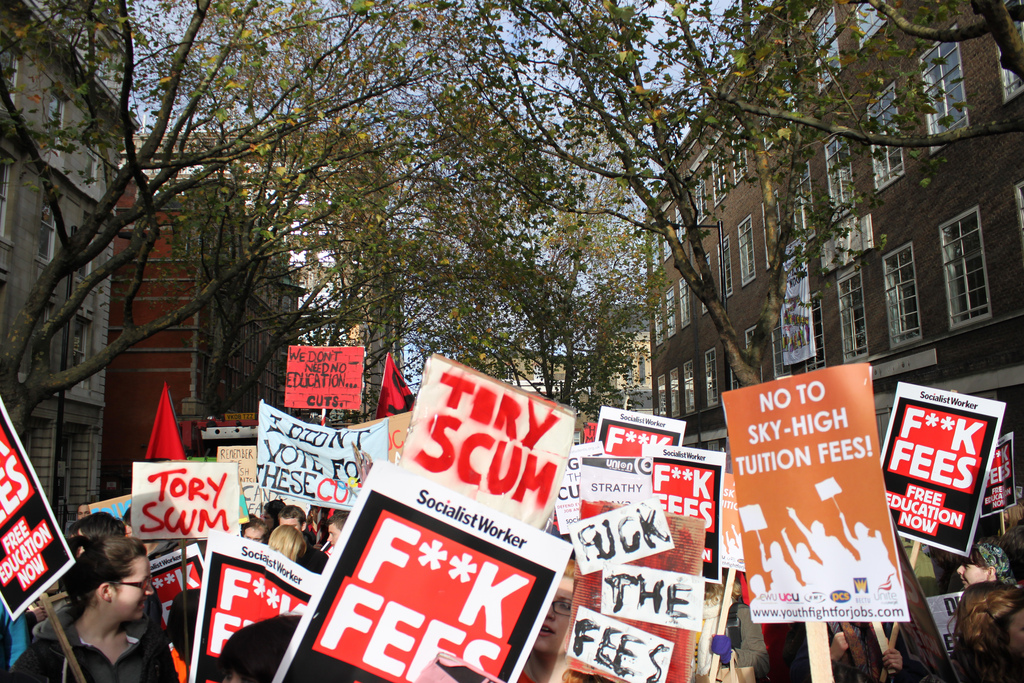 Free education seems to be a buzzing topic in the ‘studentsphere.’ Activists took to the streets of London late last year to campaign and stress the importance of saying no to tuition fees.

Last year’s student protest consisted of the usual crowd, chanting about their disapproval of putting a price on an education which a should be seen as a basic human right.

The protesters believe that higher education should be accessible to all regardless of social or economic background.

However, although the majority kept their marching within legal boundaries, as always a few disruptive characters were more interested in causing destruction of public property, which of course would be the media’s focal point.

But I began to thinking about what exactly would change if university education was free? Would it really benefit the more disadvantaged students as much as we all seem to think it would?

At first glimpse, free education sounds attractive. Everyone would have an equal chance which would not be compromised due to your social background and lack of capital – this, of course, would be an ideal.

See, it’s all well and good expressing these ‘principled’ sentiments, but whether they are actually useful in turning society into a more equal and fair place is a different story.

In fact, for a lot of economically disadvantaged young people, it is not the price of university that dictates whether or they are able to go to university or not – it’s far bigger than that.

If this was the case, that young people were to look at the price tag and think, “oh, I can’t afford that” then there would be fewer working class people at university today, but there isn’t.

Actually according to government official statistics, enrolment for students who received free school meals has increased in the last few years despite the rise in tuition fees.

We pay so much attention to the question of whether or not we should be paying for university that we ignore the much bigger social issues surrounding the subject.

Working class students being underrepresented in university because they cannot afford it is the least of our worries – although it may not seem this way.

We should be more focused on society’s attitude towards people from a lower income background. This goes hand-in-hand with the quality of their primary and secondary education.

Although it’s disheartening, even if the fees were skyrocketing (more so than now) or made completely free, we would still face the same issue of working class people finding themselves unable to go to university.

When most people picture the idea of free education, they dream up an ideal situation.

A poor deprived child who’s grown up in social housing being offered a place at a Russell Group university making their dream to study in higher education a reality; thriving in every aspect until being lifted out of poverty being able to carry out a desired career of their choice.

A romantic example of a meritocratic ideal (having been given the means to achieve of course). But when actually looking at statistics this very much remains ‘ideal’ rather than reality.

This doesn’t point out the fact that at this stage the British education system, which should be consistently fair and equal, has already failed them.

Before they even get the chance to dream up a university education they will be subject to unfair labelling, a scarcity of resources, and overcrowded classes taught by underpaid teachers restricted by a lack of funding – an education system that is a product of our capitalist society, highlighting the fact that it, as Karl Marx said, has the ‘ability to commodify every aspect of society,’ unconcerned about whether it’s a human right or not.

It may seem unusual for me to be arguing against the protests for free university education.

This is in no case the result of my spending too much free time on the Daily Mail Online, but more because, having experienced many of these deprived conditions that I speak of, I have a certain aversion towards the campaign.

I would never have considered not going to university because it was not financially viable, instead I feel as though it may not have been an option full stop for someone like me.

I am willing to accept the fact that education is and should remain a human right, but it is not a necessity in the same way that food, health and water are.

Many among us must suffer a life in want of these things.

It’s a form of relative deprivation in that the factors that appear lower down on Maslow’s Pyramid, are taken for granted and higher education is put on a pedestal as some hallowed thing, only attainable by society’s elites.

What I’m saying is that tuition fees are not the real issue faced by prospective students.

We have to understand the real problems that disadvantaged youths face. We shift focus from the key issues such as poor education, turbulent social lives, and lack of role models onto the easy-to-pick-on tuition fees and in doing so, we ignore the real problems and will struggle in breaking them.

We are currently living in a society where money is not infinite and so human rights fall into the brackets of priority.

I personally don’t believe that higher education should be valued more than someone’s right to eat or have a roof over their head.

As students, we should focus our attention on some of the malevolent malpractices that consume society.