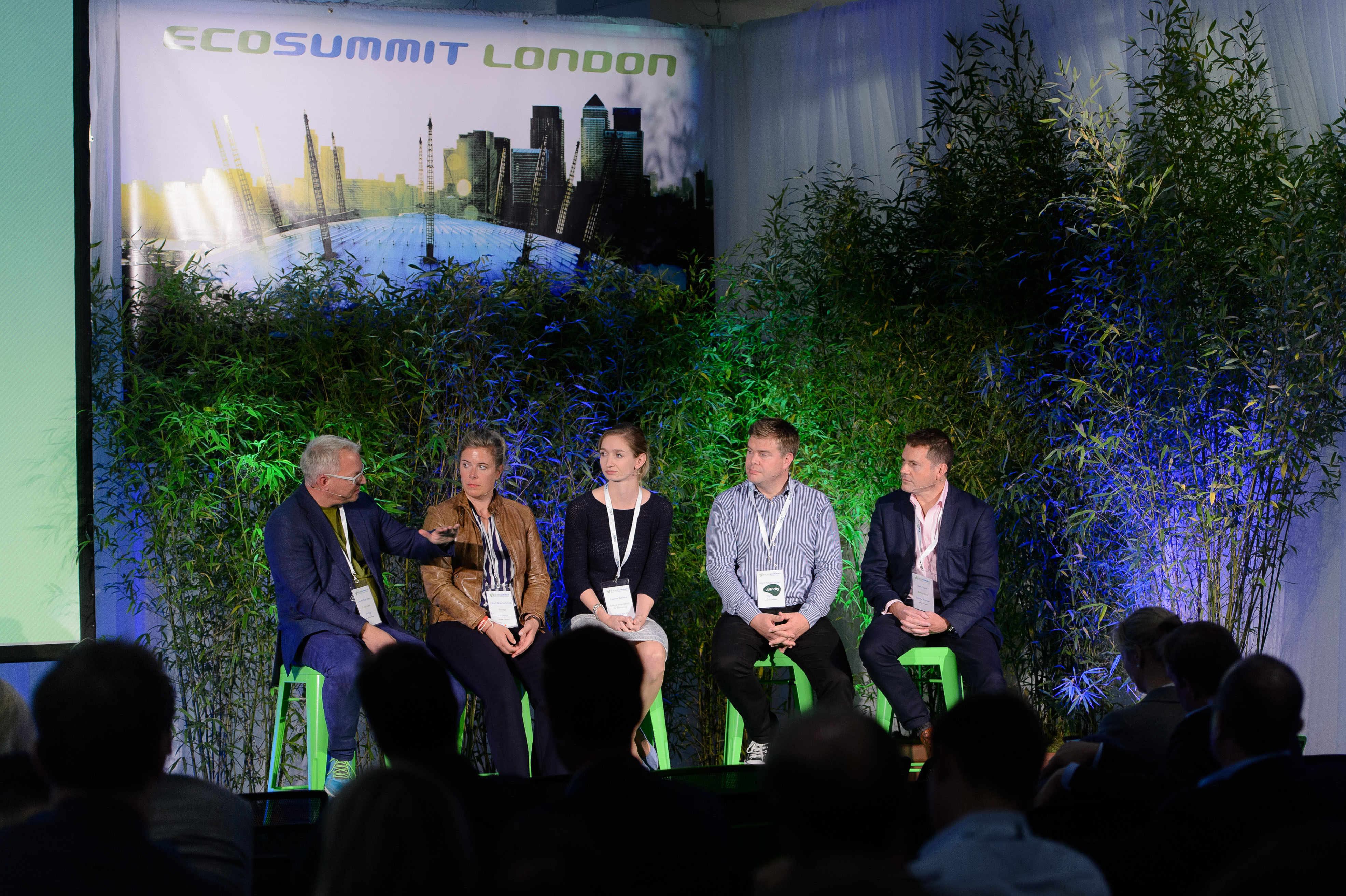 “Heat is a staggering problem today,” declared Dr. Henric Rhedin, the CEO of Sinterma, a Swedish start-up that designs Thermal Interface Materials (TIMS) that direct heat away from electronic components in order to save energy.

Similar powerful statements, start-ups, investors, and corporates circulated this annual Ecosummit conference on October 4 at Code Node in London, a venue located between Moorgate station and Liverpool St station, cleverly situated at the very hub of where the capital’s tech-enthusiasts and bankers work.

The aim of this leading green conference is to bring together all the smart technology creators, investors, and corporates in Europe. Since 2010, Ecosummit has been taken place in three major cities in Europe – Berlin, Amsterdam, and London.

This large hall in London was gloriously decorated with ceiling-high bamboo trees that accompanied a large gathering of 37 start-ups and 54 speakers, most of whom impressively sold their pitch within a challenging time frame of five minutes.

If you were an aspiring start-up at the event, the ticket would be priced between £500-£700. So, I’m sure you’d imagine that such an investment and presentation really needed to work for them. And it did. For many.

Now you’re probably wondering, what on earth was just an aspiring journalist doing in the midst of all these (hopefully for the greater good for our planet) money-business talks? Curious to learn more about the green tech industry, being an ambassador at the event was the only way to sneak my way through.

There were a handful of ideas that really stood out, not only because their presentation was momentarily convincing or captivating, but because their creation or prototypes were really well thought out. Some of which have already had a degree of initial success dipping into the big pool of smart green inventions that are trying to produce sustainable alternatives.

A successful Berlin-based start-up that got the investors, organisers, corporates, and even the ambassadors talking about throughout the day, was Ubitricity. This young start-up has designed an intelligent system that installs charging ports around the city for electric cars to recharge their renewable energy.

The process is simple in terms of how it works – almost like “a prepaid mobile phone plan”, said the Co-Founder, Knut Hechtfischer. Essentially, a couple of charging points will be installed around the city, just like it already is in Berlin. Customers charge their cars and eventually receive a bill based on the amount of energy they use. It’s practical, and, some would say, German mentality at it’s best!

A broad and diverse selection of investors were at the conference. The one where everyone’s head pretty much turned a 360-degrees was Shell; perplexing as it was, Geert van de Wouw, the Managing Director of Shell Technology Ventures claimed that were on the journey towards “fostering green energy innovation”.

USA and UK-based, IP Group, was the another investment company that made an impression. Amongst many of the services they offer, their long-term partnership with UK universities is what Dr. Robert Trezona stressed on. They put their money into the smart green-tech ideas derived from universities. They’re a great shout for the young tech-freaks in Europe.

After all the many discussions, presentations and general buzz of the conference, I managed to have a quick discussion with Jack Townsend, one of the main organisers at Ecosummit, who told me: “Young people will live through a century shaped by digital technology and climate change. They have powerful digital skills, and I hope they will consider how to use them positively, to address some of these global challenges we face.”

You can visit Ecosummit’s website to learn more about their conferences in Europe.