“We want to take over the banks.” It’s a tall order, but Monzo’s founder and chief executive Tom Blomfield has big plans for his mobile application and believes they could actually replace big banks.

The company believes in the power of the smartphone and aims at the simplicity of popular apps such as Amazon and Uber, and wants to become the Google or Facebook of the banking sector

Monzo is Tom Blomfield’s baby, born only a couple of years ago in the streets of Shoreditch. In full “Silicon Valley–Old Street–Roundabout–style”, Monzo’s headquarters, (the company’s previous name was Mondo, later changed because of copyright infringements) located in Epworth Street, is a European version of what you may find in California, in the early stages of any given start-up.

White reclining tables with MacBooks scattered all over the place are the main attraction as we walk inside the HQ. “Our team actually tripled in the last year,” Tom says as we tour the office. “Less than twelve months ago, there was only twenty of us.” 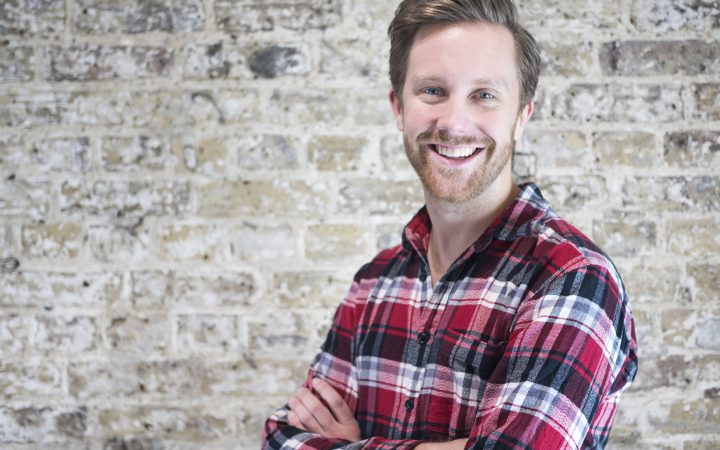 Dozens of computer programmers stretch their fingers across keyboards, their heads across monitors and, more often than not, cups of coffee rule the desks, but there is a calm vibe around the office.

As we sit down in a conference room Blomfield makes clear for us, we start chatting with him about the achievements the company has made in recent months.

For years, ordinary banking systems have seemed to work just fine. But in the era of smartphones and smartwatches the ordinary doesn’t simply seem to be enough anymore. That’s where Monzo comes along.

“The kind of experience that those [old-system] banks deliver with mobile does not really seem to improve or change or keep up with modern technology,” he says as we switch on the camera.

“In a world where you have Uber and you click a single button and the car turns up,” he continues, “I don’t understand why the experience of a banking app is not like the experience of Amazon, Facebook or Whatsapp.”

“Why does it not just work?” he says echoing the pain that people suffer every time they check their account on their phone.

Using Monzo is actually a pleasure: the app sends you immediate and responsive notifications every time you pay for something. It also recognises every vendor’s logo and puts it right next to each expense, giving you a colourful recap of why your bank account drains so easily in London.

“It should just work with a tap or two, instead with my bank it takes two days,” he says.

The app is lightweight and has a built-in budget system that should help you make the most of your funds while still saving some money.

Right outside the conference room there is an antechamber where a group of roughly twelve people are sitting around a table just packing envelopes and licking on the glue to seal them. 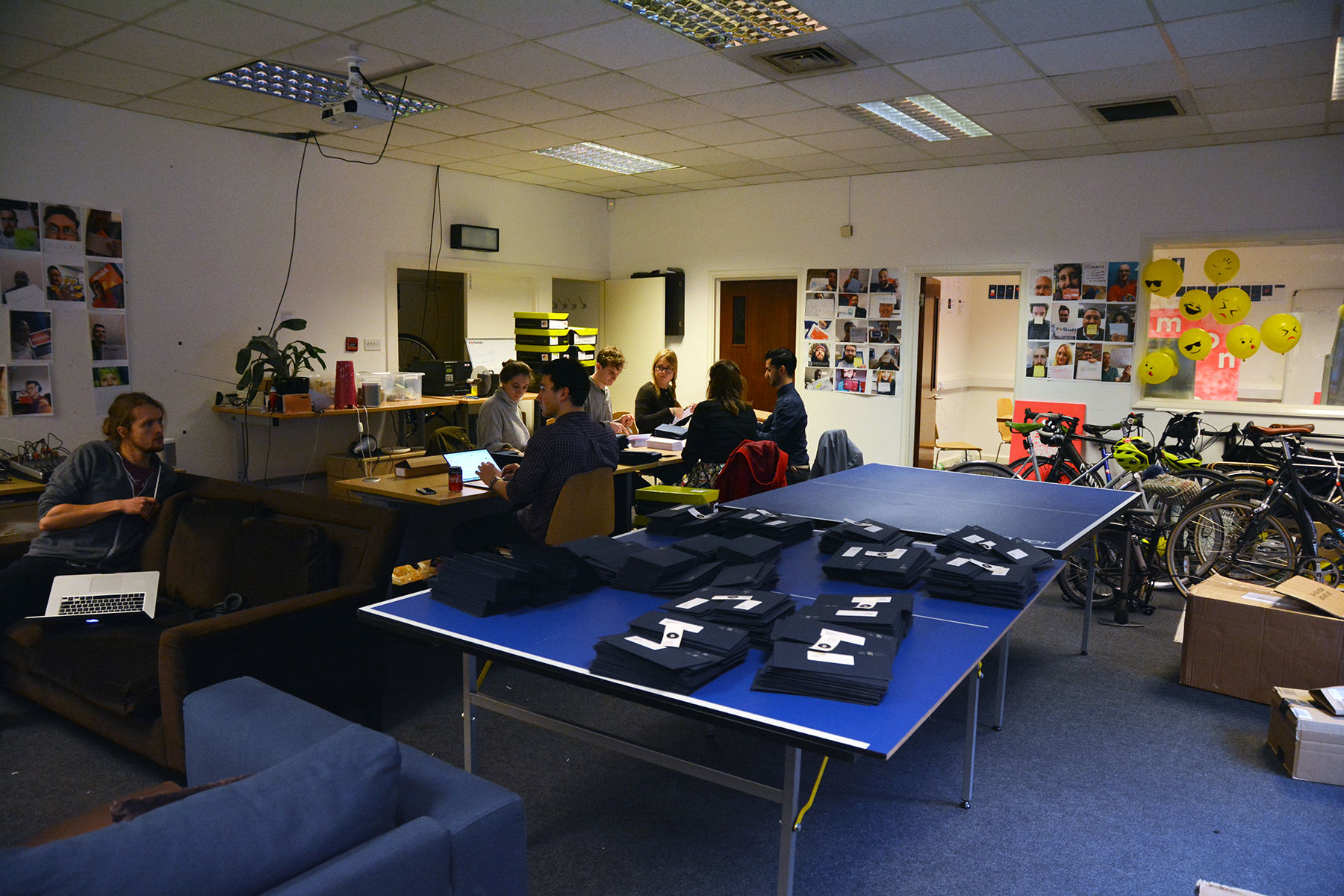 It reminded me of some sort of Chocolate Factory where everyone carries out tasks like sending out orange-highlighter debit cards in smart, elegant navy blue envelopes.

When asked about how he ended up basing the app’s experience on such simplicity, Tom answers: “I think we are simply taking lessons of consumer Internet and trying to apply them into bank accounts.”

“Where do I see Monzo in twenty years?” he repeats surprised as I ask the question; he looked like he never thought about that particular question.

“We are trying to build a financial control centre ideally for everyone in the world,” he says.

“We started in London and we now have about 130.000 users and we would really like to provide this kind of control centre for billions of people around the world. Not necessarily acting as full bank, we don’t want to offer Monzo mortgages or Monzo credit cards or but being the management interface between you and your money.”

Does he expect people to keep using Monzo as primary method for spending but backed up by traditional banking systems? “No, It’s just the other way around, I guess. You might have your saving accounts, your stocks and shares, mortgages, pensions managed by Monzo interfaces. You can visualise and control all your finances in one place.”

“I’m so sorry,” he apologises again as his phone keeps buzzing, “but it is a very busy time in here: we are moving office and there will be a lot of new features in the months to come.”

“Why is it not immediate?”

As we keep talking, our curiosity shifts towards the future of the company. Doing a bit of research about the startup it is clear how Monzo has intentions to become a full-fledged operative bank, with international accessibility.

We ask Tom at what stage of Monzo’s roadmap we are right now and he says that they are focused on the UK at the moment.

“Long term, we would love to offer our services to everyone in the world. Today, we are a prepaid card in the UK and we are looking forward to launch our current accounts over summer really,” he says.

So, what will change for the user experience? “Everyone is getting an account number and a sort-code,” he says. “You’ll be able to pay your pills, to get your salary, your student loan or whatever it is paid into your account and so you’ll be able to use and to manage all your day-to-day finances.”

Such move could truly pose a threat to the current banks, it seems Monzo will be capable of replacing the traditional banking systems?

As we ask more questions, Blomfield’s answers start shorten as he becomes more protective of the company’s longer-term commercial plans.

“It certainly takes and replicates more of their products,” Tom eventually admits. “The aim is surely to replace those banks,” he says. 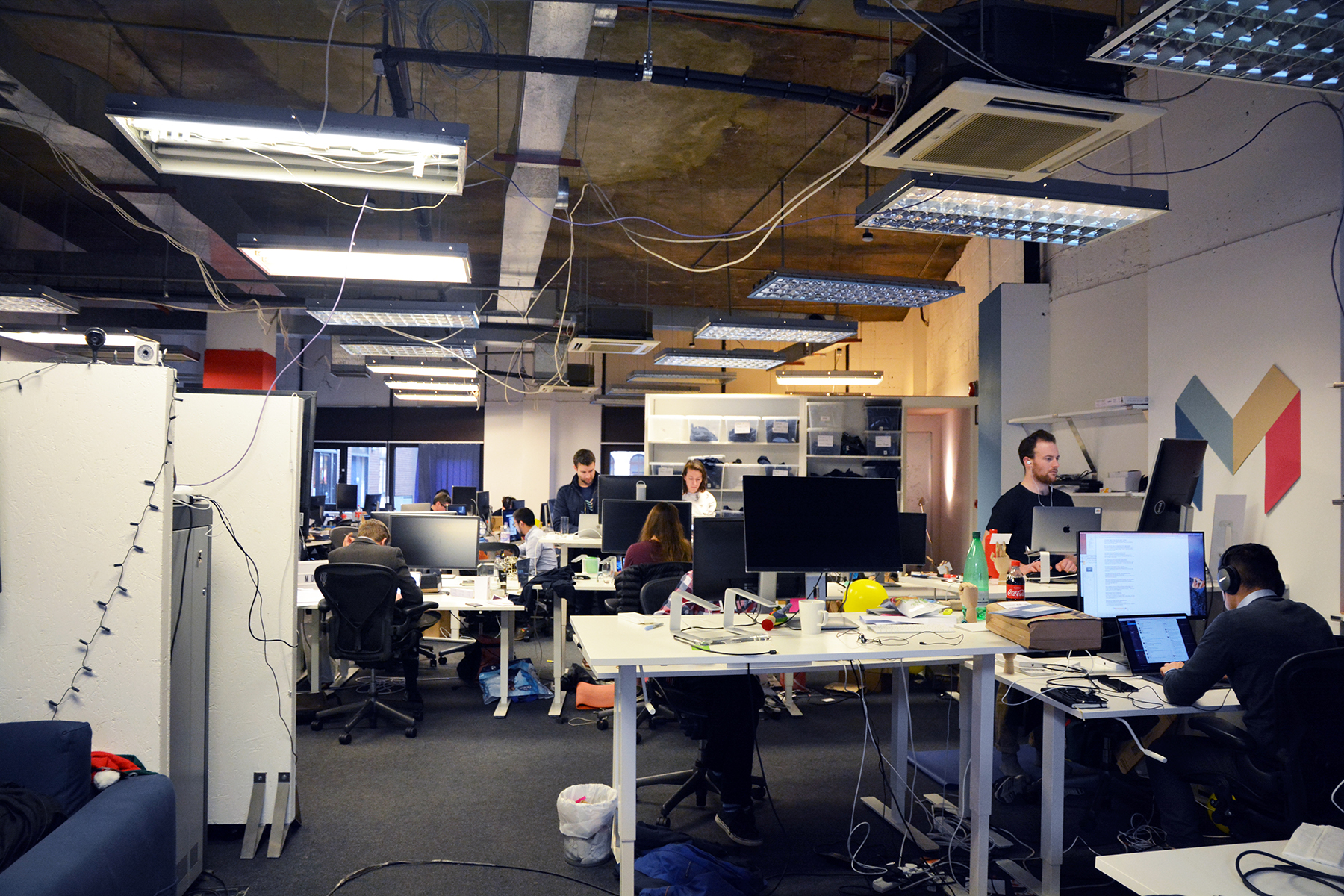 Our conversation returns to more immediate concerns, especially that mainstream (but needed) question.

Have any of your goals been obstructed by Brexit? “Yeah,” he tells us. “Not defeated but certainly delayed.”

Blomfield explains that right now UK banking licenses can operate right across Europe. Once Britain leaves the European Union, it’s conceivable that those licences will stop working across Europe and will be limited to the UK only, until alternative agreements are put in place.

“We will probably have to open a second office somewhere like Dublin, Paris or Rome to get a second license to operate across Europe,” he concludes.

He sits comfortable in the wooden chair and table in the conference room. All around him, stickers and posters of the company showing the branding in every possible variation of form and colour.

On the wall behind him, screenshots of the app and its settings are hanging with adhesive tape. A large monitor connected to an Apple TV shines bright on one side of the room.

Surrounded by Apple products, we ask about how much Monzo owes to modern technologies and companies in terms of providing the infrastructure?” 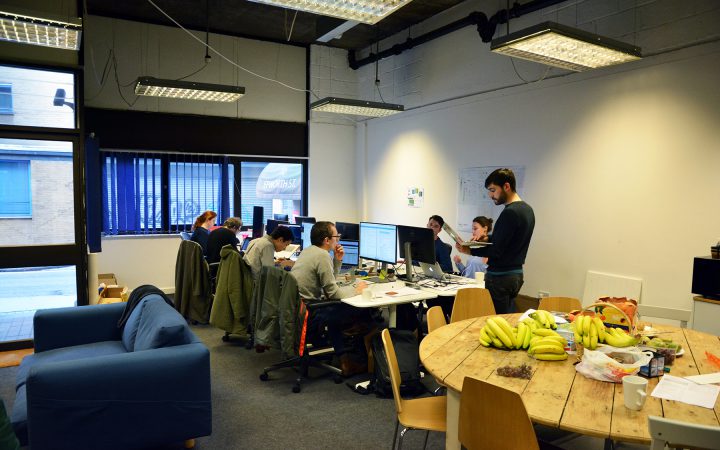 “I think the smartphone has changed the world, the same way the Internet did.

“The smartphone arguably has had a similar level of impact. The internet lets you transfer data around the world for free. But smartphone takes off the desk and put into pocket or ear. I think it enables a different interaction paradigm. Companies like Google and Apple have moved on consumer internet in another generation,” he continues.

As Apple in 2007 totally disrupted the entire phone industry, does Blomfield truly believe Monzo has a shot of doing the same in personal finance?

“Yes, If we are successful. I think it might work like the analogies between feature phone and smartphone. Whenever we had an old phone, we said ‘it makes calls’, ‘it sends texts and the battery lasts seven days’. ‘Why would I want a different phone?’, it was perfect like that,” he says.

“Monzo could be that generational shift from feature phone to smartphone.”

“Then, Steve Jobs comes along and says there is whole category of other problems that a phone can solve for you, not only calls and messages but they create entire industries. UBER was created by the smartphone as well as Amazon Prime and Deliveroo. All these things were enabled by the smartphone.”

“What we want to do is similar to banks,” he says. Until now, everyone get their bank accounts and they make payments, they paid their bills and have their card. “This is a bank, why would I want anything different? It works fine… right?!”

“What we are trying to say that there is a whole category of other problems that your bank could solve for you. They might be help you budget, save money or switch your electricity, car, insurance or gas. It might be collecting cashbacks or redeeming offers from supermarket or other things you like. This is not exactly what today’s banks do right now,” he concludes.

According to Blomfield, Monzo could be that generational shift from feature phone to smartphone, time will tell whether he’s right or not.