Cocaine in the kitchen

American celebrity chef Anthony Bourdain is often credited with exposing the intense and drug-fuelled world of chefs working in the hospitality trade in his book Kitchen Confidential, which came out in 2000.

Bourdain doesn’t hold back in his graphic insight to the professional culinary underworld: “You might get the impression from the specifics of my less than stellar career that all line cooks are wacked-out moral degenerates, dope fiends, a thuggish assortment of drunks, sneak thieves, sluts, and psychopaths. You wouldn’t be too far off-base.”

The idea of substance abuse in the kitchen has clearly never been considered classified information, but nearly 20 years later, British chef Gordon Ramsay is trying to blow the lid on what he calls “the hospitality industry’s dirty little secret”.

Speaking to The Guardian in advance of an ITV produced show Gordon Ramsay on Cocaine, he states that cocaine use “is rife in kitchens” and whilst testing the toilets in his 31 restaurants worldwide, he found traces of cocaine in all but one.

Ramsay even gives an anecdote of a time he was asked to mix icing sugar with the class-A substance and sprinkle it on top of a soufflé.

[pullquote align=”right”]“I’ve even known other chefs to use seriously hard drugs like meth, heroin, and crack.”[/pullquote]But are these stories and reports of wild cocaine use confined to the extremely high-pressure Michelin-star kitchens, the kind that Bourdain and Ramsay are accustomed to, or is the use of cocaine in the kitchen truly a profession-wide problem?

Kane McLean*, 21, is formerly an apprentice chef, who worked in high-class restaurants and hotels in London from the age of 16.

He says the first time he became aware of drug use in the culinary industry was before he even stepped into a kitchen: “I was warned while still at my cooking course at college that there were high amounts of drug use [in the industry.”

But it wasn’t until he started working at a five-star hotel in central London that he had first-hand experience of cocaine use in the kitchen: “The first thing I noticed was the unusually high energy levels of chefs that were working 12-or-more hour shifts every day – then I learned about prep.”

The term ‘prep’ is common kitchen jargon for the preparation of various ingredients for efficiency during the peak times of food service. However, McLean reveals that ‘prep’ had a different meaning in his kitchen.

“I didn’t understand at first when a few of the chefs in the morning used to say to each other ‘let’s go and do a bit of prep’ and disappear for 20 minutes and return with no food actually being prepared.”

Despite only being 16 at the time, it didn’t take long until McLean was invited to ‘prep’ himself. He politely declined each time but feels had he been older he may have felt pressured into using cocaine on the job like his colleagues.

McLean says that the use of cocaine in the kitchen was essentially common knowledge amongst all of the culinary staff, including the head chef, who McLean is certain was also using cocaine daily: “He barely even did any cooking.” 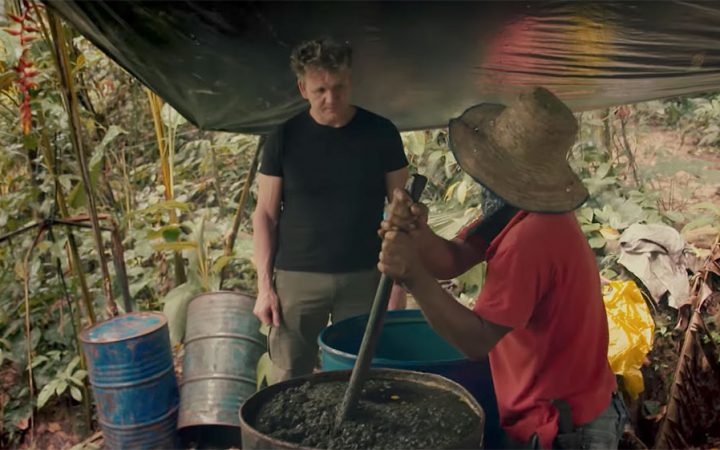 Chef Gordon Ramsey traced the source of cocaine for his ITV series [YouTube:ITV]

Cocaine use was a daily occurrence, however McLean believes the amount of cocaine being used coincided with the amount of pressure on certain shifts; for example, if there was a big event with hundreds of guests, the chefs would disappear to the toilets more frequently.

“I think that’s when I understood the ‘prep’ joke. Just like you prepare for service with food, they were preparing themselves for their shift with cocaine.”

Ultimately, McLean understands why certain chefs choose to use cocaine on a daily basis. “Some of the chefs in the kitchen were working 80-100 hour weeks. I think they were using cocaine just to get by, just to stay awake. You have to stay alert, and I guess the cocaine helped them stay on the ball.”

McLean’s experience of a professional kitchen brings some shocking revelations about the lack of secrecy surrounding drug use and his exposure to the activity at such a young age. Darren Felton’s story, however, gives a first-hand account of the reasons why chefs use cocaine on the job.

“I’ve worked in about ten professional kitchens across London and the surrounding area, ranging from gastropubs to hotels and professional event spaces. My current job is the first where neither myself nor any of the other kitchen staff use cocaine.”

Felton*, 28, explains that in the 12 years he used cocaine while working as a chef, he and others around him have used it as a “fuel” as opposed to recreationally.

“I used cocaine to allow me to do 17, 18 hour days, seven days a week. The majority of chefs who use coke, sniff it just like office workers drink a cup of coffee.”

Felton described the frequency and quantity of his drug usage. “It was every day for months and months on end. I could have done between half a gram to three or four [grams] in a single day.”

He admits that for long periods he had an addiction: “If I’m honest, I mostly enjoyed taking cocaine daily because I thought it made me a better chef. I was faster, more efficient, and it allowed my mind to stay focused on the job I was doing.”

It was working in the kitchen of a leisure centre that Felton says is the most he’s ever used the drug: “We’d be on the pass (a heated metal structure used to keep food hot before it is delivered to guests) and just rack up on there. It was ridiculous.”

[pullquote align=”right”]“The majority of chefs who use coke, sniff it just like office workers drink a cup of coffee.”[/pullquote]Felton confirms there was a risk of cross-contaminating people’s food with cocaine, but there was no punishment for it because, just like Kane McLean’s experience, the head chef was also a cocaine user.

It wasn’t just cocaine he used in the kitchen either. “I’ve smoked weed, taken [ecstasy] pills, and speed whilst on shift. I’ve even known other chefs to use seriously hard drugs like meth, heroin, and crack.”

Felton adds that in the majority of kitchens he has worked in, it was the English members of staff who used cocaine. “The Eastern Europeans were never interested in coke; they just wanted to drink [alcohol].”

Felton hasn’t used cocaine whilst at work for over six months now, and in hindsight understands the vicious cycle of usage he’d fallen into.

“It was so expensive, I was basically working to feed my habit, but at the same time I had to feed my habit in order to work.” He does explain, however, that not all chefs turn to drugs or drink to get through the week. “I’ve known chefs who are completely anti-drugs, and they’re still great at their jobs – so it is possible.”

The insights into life as a chef given by both McLean and Felton not only confirm Gordon Ramsay’s claim but paint a vividly dark picture of an industry that is driving itself to addiction to some of the hardest drugs available, especially cocaine.

Both chefs, regardless whether they have used whilst on the job, both clearly understand and almost sympathise with the use of stimulants due to the literal pressure cooker of an environment they work in, plus the long and unsociable hours.

Ramsay’s new TV show is sure to shed more light on the situation, but as long as the job description of a chef continues to require such physically and mentally demanding tasks, the harsh reality is whether anything really be done to save the culinary world from itself.

* The names in this article have been changed to protect the identity of the interviewees.