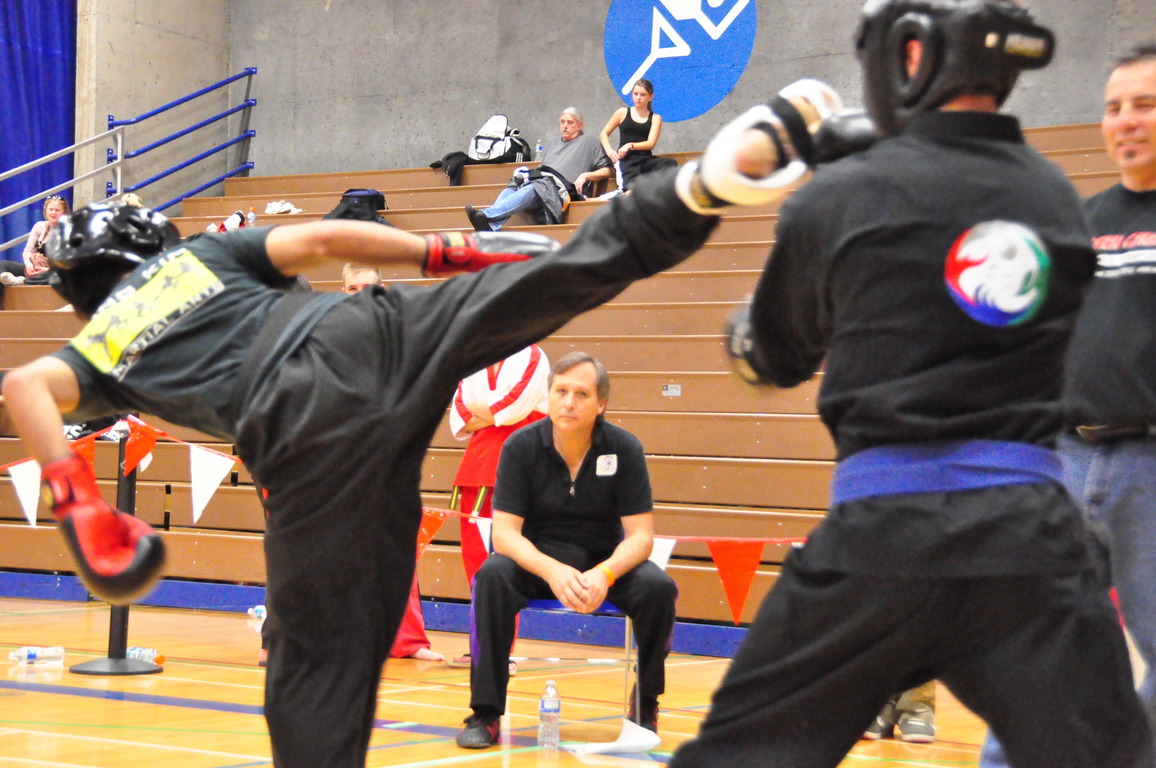 For decades, officials in a variety of karate organisations, who specialise in a variety of styles, have fought to receive recognition from the Olympics to have this beautiful martial art added as an Olympic sport.

The fight was seemingly endless, and many competitors within the sport believed that karate would never make it as an ‘elite sport’. After all, there are already two very striking sports within the Olympic Games – boxing and taekwondo.

Karate has always been considered the underdog, whenever discussions around martial arts take place, yet the reasoning was never clear why. In the past, the Olympic movement put this down to the fact that, bringing another martial art to the table wouldn’t add anything new to the the Games.

However, those who have been training with the England squad, and other elite groups, finally have something to celebrate. Karate has been dancing on the toes of the Olympics throughout the last few decades, and has finally become an Olympic sport, which will be one of the highlighted aspects of the next Games, in Tokyo in 2020.

The Olympics has now given the sport an opportunity to show that it isn’t just a pretty presentation of hand and foot movements, but a genuine and strenuous martial art, worthy enough of the title of an Olympic sport.

Nevertheless, when you do watch karate in motion, you seen the full mind and body connection. It is beautiful, but more spectacular still, is the speed, power and sharpness of each individual techniques, making both Kumite and kata one of the most spectator-friendly of all martial arts. 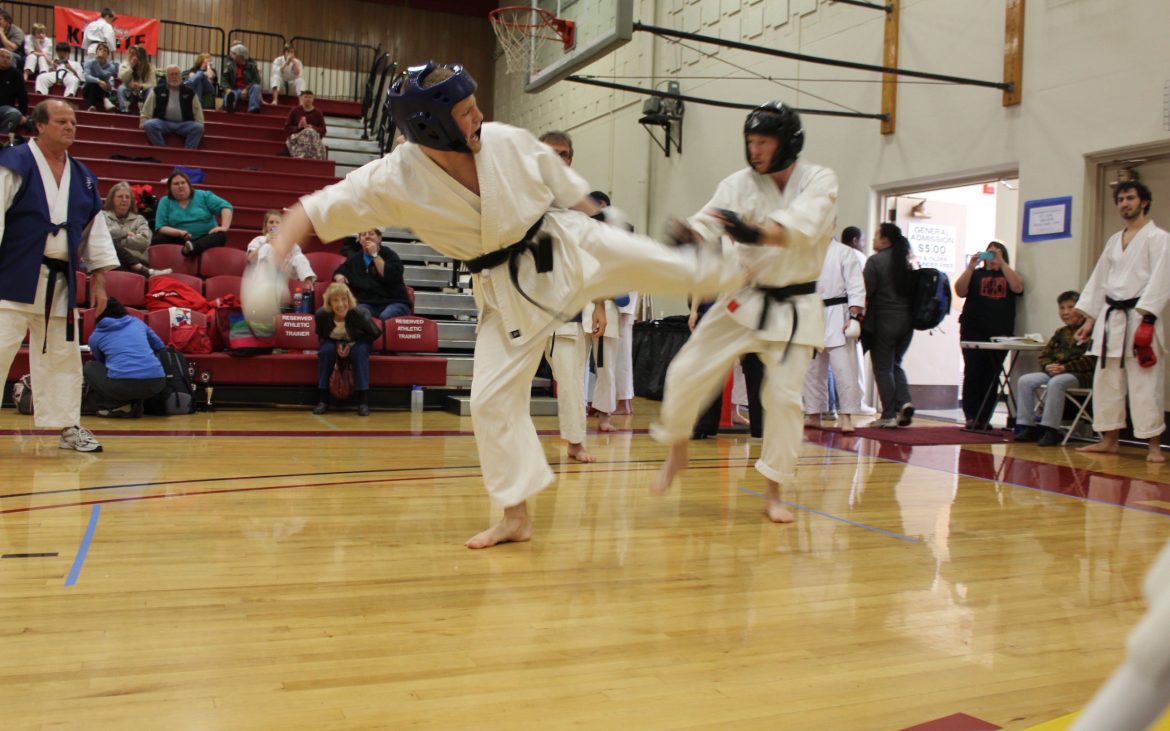 However, the 2020 Olympics has also given karate a way to spread the sport’s message a little further abroad. The martial art instils within its students the character building of self-esteem, self-respect and the art of confidence and discipline. It also aims to instil positivity and discipline in every aspect of its students, as well as fitness, and of course, the ability to defend themselves if they ever need to do so.

The discipline, fitness and idea of self-defence is often why some parents decide to place their children into such a sport to begin with. Eva Williams is one of those parents: “I put my children into karate primarily to learn self-defence and confidence. With my children growing up on an estate, especially when they were very young, was so worrying because of the gang activity. I needed them to know how to defend themselves as I didn’t know myself,” she told Artefact.

“Seeing my son progress is such an amazing feeling. He has achieved more than I expected. Achieving his black belt was an absolute dream come true. Karate is definitely giving him confident, and his fitness is fantastic! He has so much respect for others now and his teaching skills as sempi/sensei are improving.”

It isn’t just Eva’s son who is doing well within the sport, her daughter, who is a lot younger, is doing just as well, finally achieving her purple one stripe belt. Despite her daughters’ age, her technique is rapidly improving, while her confidence in competing in relatively large competitions is improving too. Just like most parents whose children are progressing, Eva is extraordinarily pleased.

“My daughter is mirroring my son and is achieving too. Although, she is really young at the moment,” she explains. “Karate is helping to build her confidence to compete in competitions and her skills are coming along, but there is still room for improvement. She is definitely committed to the sport.”

It is clear to see, through the way in which Eva cheers along in karate classes and competitive environments, just how proud she is of her children’s achievements and successes.

Even in their defeats, she keeps morale high and attempts to keep her children’s confidence as high as possible too. Like many parents, Eva has huge ambitions for her children, all of which are achievable. 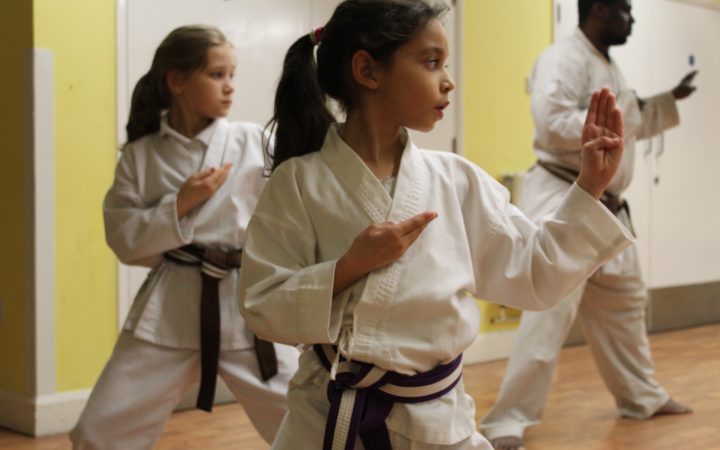 “My ambitions for them is to teach their kids self-defence, because I hate that I easily crumble in most situations. I hope that they keep up the sport for fitness, plus it’s a fun outlet. I also hope that they put back into the sport, just as much as their sensei gave to them,” Eva explains.

Senseis put so much into their associations, as well as giving so much to their students, that for most parents and students alike, it feels almost a must that we put in just as much into the sport as we’ve taken away.

For most parents, self-defence is the most important aspect of introducing their children to the beautiful world of karate. However, many do not realise that they could also be setting up their children to become a future athlete, just as easily as Eva’s children could become. Of course, once you’re attuned to compete, you are considered an athlete, but to compete in the karate championships, and in the 2020 Olympic Games, that would classify you to be in an entirely different league of athletes altogether.

Obtaining that level of excellence doesn’t come overnight. It is something that requires a great deal of dedication, precision, practice and ambition, so it’s of no surprise that only the most dedicated and talented will be considered to enter the anticipated 2020 Games.

However, there is so much enthusiasm and such a deep love for the sport, from all students and sensei’s alike, that it isn’t surprising that there is such excitement surrounding the news that karate has been finalised as an Olympic sport.

For Dave Levine, who began his training in the early eighties, and is now a Third Dan Black Belt in Shotokan Karate, the anticipation of karate entering the Olympics has lasted many, many years. 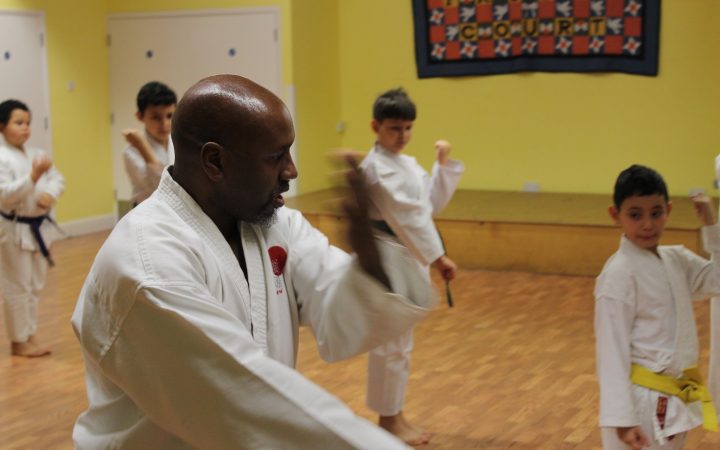 Karate training can start at a young age

“If you’re training in karate, it should be one thing throughout the associations with the rules you know. I know some places that if you go and train with another club, they’ll kick you out of their club and association. The only thing that should happen is that you ask your sensei if you can try another club out of respect. With our club, nine out of ten times, they’ll say yeah go and train and anything new you learn, come back and show us and that’s how it should be,” Dave explains.

It isn’t just the petty politics that has hindered karate in becoming an Olympic sport. Karate is supported by a huge organisation and is extraordinarily technical. Each style of karate has its own point system, and each style has a variety of differences in the movements and techniques too. In competition, this can become relatively confusing, especially when different organisations and styles come together to compete.

No wonder it has taken so long for karate to become an Olympics sport. However, it is surprising that karate is as pathetically political as it is, in which was an obviously large aspect to hindering karate’s achievements of becoming an Olympic sport to begin with.

However, after 2020, there may not be another opportunity for karate to compete within the Olympic Games again. At the moment, the sport has only been approved for the upcoming Olympic event. In order to allow karate to become a regular Olympic sport such as gymnastics, karate officials would need to propose the sport again for any future Olympic events.

However, this is such a historic moment for the sport, and millions of practitioners world-wide will have the opportunity to shine, and obtain an Olympic glory. Karate, as a sport, definitely has something to celebrate.