Exhibition | Basquiat at the Barbican: Boom for Real

The iconic Barbican Centre has played host to Boom for Real, an exhibition based on the works of world-renowned artist Jean-Michel Basquiat.

The exhibition has seen mass amounts of press coverage, as Basquiat still remains the “main man” in street art, almost 30 years after his death from a drug overdose in 1988 when he became a member of the exclusive “27 club”, joining Kurt Cobain, Jimi Hendrix, Janis Joplin and so on.

Basquiat was born in 1960 in Brooklyn, he was obsessed with drawing from a young age with his father, who was an accountant, bringing home paper to draw on. He pushed this creative drive towards painting in a harsh and brutal manner.

Leaving home in June 1978, he chose to stay in New York, which at the time was on the brink of ruin. Crime doubled, areas such as the Bronx were lit at night by the flames of bonfires and there was a housing crisis. But amongst all this madness, a young artist found a place to flourish. 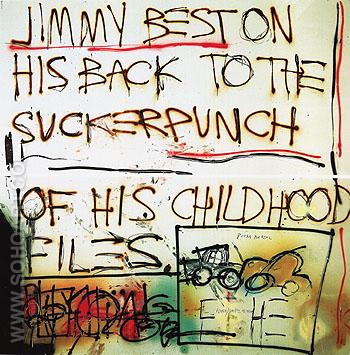 By the time he was 20, he was being praised globally in the art world as something new, unseen and unheard of before, one of a kind. His work took many forms, be it graffiti, paintings, written word art and so on, but they all appeared unique, unlike anything before.

Maybe it was the way he brushed, sprayed, skewed, stabbed, splashed and beat his art onto whatever surface he was working on. Basquiat changed the face of art, bringing something new and captivating, and his legacy still shines through the work of many artists today. Not only does his legacy impact art, but contemporary culture on a whole.

Basquiat’s work has been sold at auction for over $100 million (£71m) per piece, setting the record for the highest auction price of an American artist at a staggering $110.5 million (£78.5m) for his piece Untitled, so seeing the large majority of it all under one roof is incredible.

That’s the great part about this exhibition, seeing this art in person, which you’ve only ever witnessed online or on printouts in a picture shop. 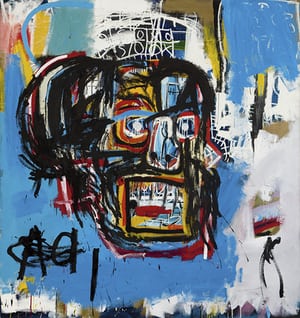 Not only do you have access to some of his most renowned pieces, such as King Zulu (1987), but can also see some of the artists early work, such as postcards he made in collaboration with Jennifer Stein, which he famously made his break by selling one to Andy Warhol for a dollar (71p) when he spotted him at a restaurant in New York, and a history of his early work under the alias of SAMO (Same Old Shit).

Throughout the exhibition, you are exposed to a number of short films that featured Basquiat.

These short films showed the notoriety that he held in the arts and music scene in New York, as many of them also feature icons such as Andy Warhol and Debbie Harry.

Further along the exhibition, you come to the Beat Bop section, where the Hip Hop classic Beat Bop by Rammellzee and K-Rob is playing. The track was produced by Basquiat, and the exhibition has obtained one of the original black label first presses of the single, of which there are only 500 known copies worldwide.

The track is playing on the background, which brings a new lease of life to the exhibition. You begin to see his work in a new light, which was heavily influenced by jazz, blues and hip-hop.

This section features the colourful Hollywood Africans piece, in a blinding yellow which features portraits of Rammellzee, Toxic and Basquiat, giving you a lift in mood, eager to dig deeper into the exhibition. 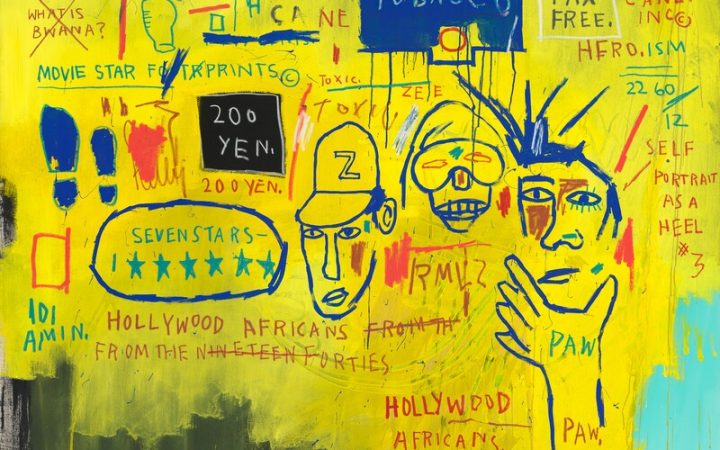 Basquiat still has an impact on music today. Kasabian brought out The Party Never Ends on their 2017 hit album For Crying Out Loud which featured the lyrics ‘Basquiat’s hanging on the wall’.

When I was walking around the exhibition I spotted Singer Paolo Nutini observing one of the pieces, possibly looking for inspiration for his next album.

Another attendee, Ronan Mannion, gave us his views on the exhibition and the impact he feels Basquiat has on modern society today: “The exhibition is fantastic. It manages to convey the feverish energy of downtown New York at the time and the impatient creative nature of Basquiat. The art itself is a disturbing marriage of foreboding and dark comedy.” He went on to tell us: “It’s hard to overstate the relevance of his caricatures  of race relations and his anti-establishment message in today’s Trump America.”

The Barbican Centre and the curator of the exhibition has seen some negativity from the press in light of the exhibition, being accused of focusing too much on the context, looking at Basquiat’s celebrity relationships with the likes of Andy Warhol and name-dropping too much in the comments beside the work, mentioning likes of David Byrne, Madonna, Brian Eno and many more. The exhibition’s critics say this is taking the focus away from the actual art.

Many disagree, and this celebrity-featured context demonstrates how much impact Basquiat had on art and music, with these artists all taking influence from him and his work. Leaving it out would just be ignoring the massive cultural impact he had. The exhibition also features great descriptions on the different styles, techniques and influences of Basquiat, such as Ishtar (1983), a large piece mounted on wooden blocks.

They explain it was created by a background being pasted with photocopied drawings to read like hieroglyphics on a wall, in relation to the name of the piece Ishtar, the Egyptian Goddess of fertility and war. They leave no stone unturned, explaining Basquiat’s fascination with mythology in great detail. 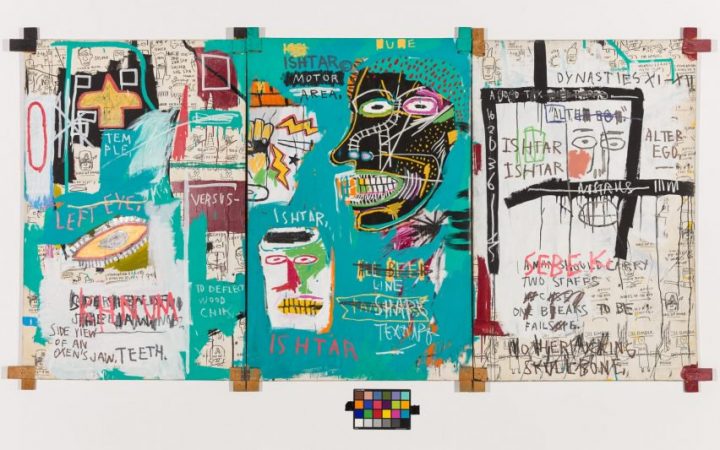 Others agree: Mandy, an art student told us: “I discovered Basquiat through reading about the New York music scene, so this is actually a way people has found out about him and his work. It’s all relevant. He’s such a massive influence amongst artists today. There’s so many people in my class who emulate his work to the point that they just want to make exactly what he has.”

Arthur, another attendee told me, “I love how his work brings up racial issues from the past, but pairs them with the beautiful creations of black people, such as jazz. The exhibition has done well to highlight these issues in their descriptions, as well as pointing out the influence black culture had on his work. I’m so glad this art has finally made it’s way to the UK, it’s been long overdue!”

Yes, there are parts of the exhibition that are slightly cringe-worthy, such as the statement of “New York’s fly-by-night crowd of punks, posers and the ultra-hip”, when describing the Mudd Club, the underground music haven set up by Brian Eno, but on whole this exhibition really can’t be faulted. It has grasped a character of artistic dominance, taking you on a trip through his life, work and legacy in a massively informative manner.

Overall, this is a fantastic exhibition. You see the work and life of one of the most notorious artists of all time, a real game changer. Get down and see it for yourself before it comes to a close on January 28, 2018.