Sat on a worn leather sofa with a few friends, listening to Kodak Black’s Roll in Peace and chatting with people who are smoking of a joint of high-grade weed that they bought over the counter just minutes before, you’d probably assume I was in one of Amsterdam’s world famous cannabis coffeeshops. But there are no canals in sight, no alleyways lined with red neon lights – I’m in the London area.

The concept of a place where people can buy and smoke weed, in a relaxed and friendly environment has likely always been desired here in the UK, and probably partially explains why thousands of ‘weed tourists’ fly to the Netherland’s largest city every year, due to the decriminalised status of the drug and its many coffeeshops.

However, the fact that cannabis is classified as a class-B drug in the UK and possession can land you behind bars for up to five years, with supply or production warranting up to 14 years; you would have thought it impossible that London could have its own version of a cannabis coffeeshop.

After going up a flight of stairs and through a door with a heavy code-operated lock, I find myself in a relatively open space. The walls are lined with a significant number of sofas and tables. There is a projector in the room playing rap music via Youtube, and a pool table where two men in their 40s play whilst sharing a joint. Towards the back of the room is what officially makes this place a coffeeshop – the “bud bar”.

The vast majority of people who smoke cannabis in the UK will get their product from a street dealer, likely meeting in a discreet location and hastily exchanging cash for a bag of weed. Here, however, things are different.

Beside a framed Bob Marley poster and Rastafarian flag, a large whiteboard placed in the middle of the bar serves as a non-fixed menu and boasts over 30 different strains of cannabis. Before you buy, the “bud-tender”, a cheerful and personable man, offers to show you the weed you’re interested in – even allowing you to touch and smell the product. There is no rush, and the bud-tender offers advice on which strains are stronger or more potent.

Most impressive, however, is the origin of the strains available to buy over the counter. Of the vast number of strains on offer, over half of them were in the “California Love” section. Whilst the more local Amsterdam is famed for its high quality of smoke, Californian cannabis, or ‘Cali weed’ – smoked by the likes of legendary rapper and cannabis advocate Snoop Dogg – is about as good as it gets for some weed smokers.

The state of California was the first to legalise cannabis for medicinal purposes back in 1996, and twenty years later, voters backed Proposition 64 and decided that the drug could be used recreationally as well. The law change came into official effect on the 1st January 2018, and BDS Analytics predicts that by 2019, the weed business in the sunshine state will be worth $5.1 billion (£3.7 billion). The beer industry in California is worth an estimated $5 billion (£3.6 billion).

With Californian strains such as “Smarties”, “Wedding Cake”, “Grease Monkey”, and even rapper Wiz Khalifa’s “Khalifa Kush” available to buy 5,300 miles away in London, it was by far the most extensive and international weed menu I had ever seen. My friends chose “Gelato 25”, and at £35 for a gram and as a first-time triers of Cali weed, they said they were satisfied, albeit inebriated. 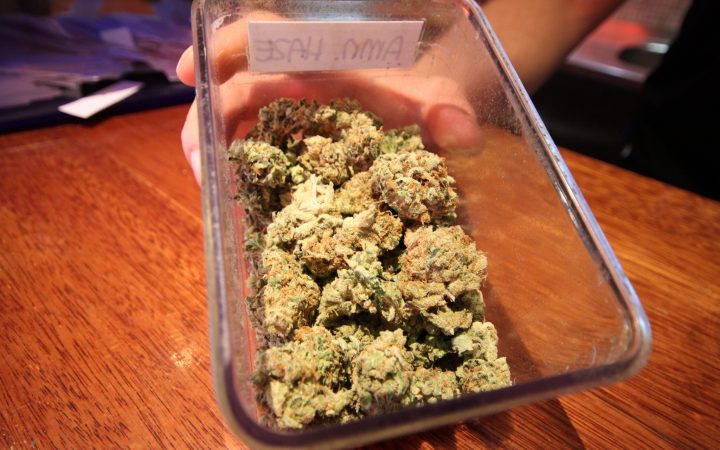 A “bud-tender” shows a customer a strain of weed in an Amsterdam coffeeshop [Not4arthur, Flickr CC]

Obtaining and transporting such a vast amount of cannabis from the United States to the UK must be no small feat, and gave context to the black and white framed picture of the late infamous drug smuggler Howard “Mr Nice” Marks hung on the wall next to the coffeeshop’s PlayStation-4 setup.

They didn’t just sell weed at the bar either, with a selection of refrigerated soft drinks, including some American imports of the legal kind, like Arizona Ice-Tea. Also available to buy was a modest selection of paraphernalia, mostly essentials such as papers and filter tips. Notably, alcohol was not served.

Whilst the existence of such establishments is not exactly a secret, the location of them quite obviously is – it took me a number of weeks to locate the coffeeshop I visited. Word-of-mouth is pretty much the only way to find out where a coffeeshop is; unsurprisingly there is no information online containing any sort of address or exact whereabouts.

When trying to locate a coffeeshop to visit in London, it became apparent that the one I visited is not the only one of its kind. I heard about a number of different places in different parts of the city, and other parts of the country for that matter, including Nottingham, Bristol and Coventry.

There is clearly a demand not only for smoking cannabis in the UK but also for the culture that comes with it – spending time with like-minded people in relaxed, safe environment, as opposed to smoking weed in a dark alleyway, looking over your shoulder for an un-announced police car. It is no real surprise that some people are taking the huge risk of opening an illegal coffeeshop where people can buy and smoke weed to tap into that market.

The underground cannabis coffeeshop scene in London and the rest of the UK draws huge parallels with the speakeasy bars and the 1920s prohibition of alcohol in the US. Such was the public demand and perception of alcohol, that some willing entrepreneurs decided to give the people what they wanted, provided their clandestine establishments could remain a secret to the authorities. Only when the government realised they were only fuelling a drastic rise in crime and saw how much money could be made by taxing a product like alcohol that everyone desired, did prohibition end.

Nearly 100 years later, a similar situation is unfolding here in the UK. With places such as Amsterdam and a growing list of US states including Colorado and Washington permitting the use of cannabis recreationally, people are beginning to ask if the UK will follow suit.

The incumbent Conservative government has a tough stance on weed, with a Conservative spokesperson telling the BBC during the run-up to last year’s general election “there is clear scientific and medical evidence that cannabis is a harmful drug which can damage people’s mental and physical health, and harms individuals and communities. We have no plans to change the law.”

The Labour party’s official word is also anti-legalisation, although leader Jeremy Corbyn has expressed his support for cannabis use for medicinal purposes. The Liberal Democrats are the only major party to fully support the idea of a regulated cannabis market in the UK, and with their election to power highly unlikely, the immediate future of the UK looks to remain legally without weed. 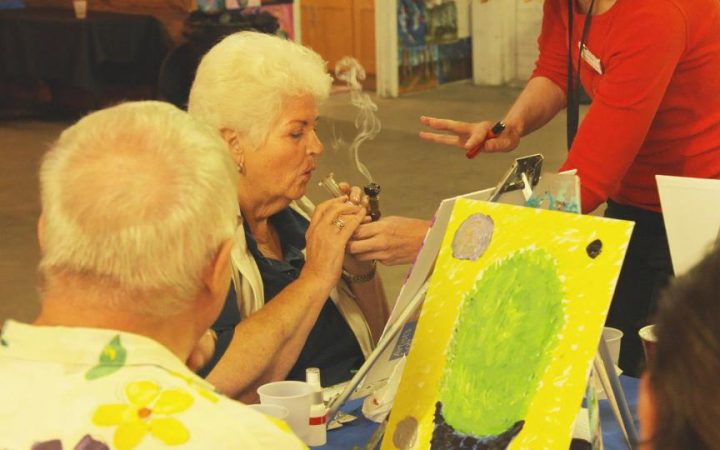 However, the British public perception of cannabis may be starting to change. A recent ITV show Gone To Pot: An American Road Trip, followed five national treasures including Christopher Biggins and Pam St. Clement (Pat Butcher from Eastenders), as they toured the US and tried cannabis in different forms. A decade ago, the idea of such a show would have had you removed from the producer’s office by security, however St. Clement called the experience “refreshing”, despite a few of the cast making themselves ill from “over-doing it”.

Furthermore, a poll carried out in 2013 by Transform, a drugs awareness think tank, discovered “over half of the public (53 per cent) support cannabis legalisation (legal regulation of production and supply) or decriminalisation of possession of cannabis,” and “around two thirds (67 per cent) support a comprehensive independent review of all the possible policy options (from legal market regulation to tougher enforcement) for controlling drugs.”

More recently in 2016, a poll carried out by the Independent found that 47 per cent of British people want to see the class-B drug legalised and sold by licensed stores.

Regardless of public opinion, however, cannabis coffeeshops like the one I visited remain illegal, and those behind the establishment would almost definitely face jail time if caught and convicted. With the demand for weed and weed culture showing no signs of slowing, the UK faces a simple choice: continue to fight the un-winnable war-on-drugs, or follow in the footsteps of California and Amsterdam and let people make their own decisions.