Yoga and the whale

With the early breeze chilling spines and the sun cascading down from the tip of the building, the Natural History Museum opens it’s doors a little earlier than usual. Teaming up with East of Eden, a group of yoga instructors based in Walthamstow hosts early morning yoga sessions under the famous blue whale skeleton. A class of nearly 100 people gather on the early Sunday morning.

Directly underneath the skeleton, the early birds, who have already rolled out their yoga mats, prepare themselves for a mental and spiritual cleanse. As the hall settles and 8:00 am approaches, a sudden drone of a conch shell fills the room. The sound echoes and with the mixture of the deep sound and cold breeze that fills the room, goosebumps form and you can feel the sound almost hit the pit of your stomach. 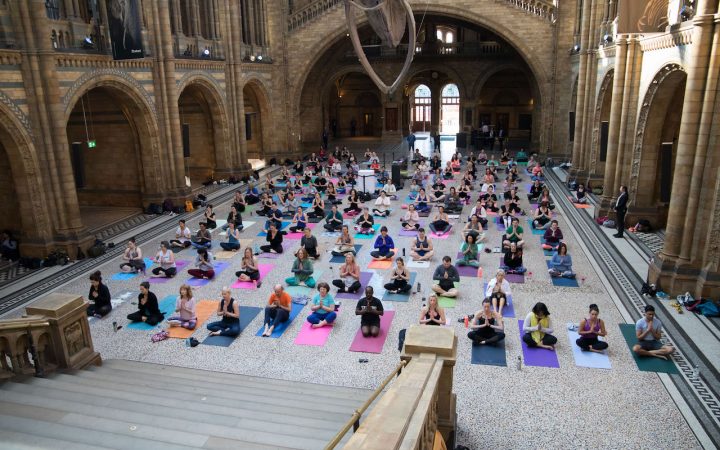 The class itself begins with a brief introduction of what will happen throughout the session. Starting with deep breathing exercises, the room is now filled with a deep guttural humming sound.

“20,000 people walk through these halls. It is also the same number of breaths we take in one day,” says Amy, one of the yoga instructors.

The class then can officially begin, and people with different levels of the practice can be distinguished amongst the crowd as some find it more difficult to balance. Despite this, there is a sense of unity and calmness.

After the various poses practised in the class, everyone is told to grab their jackets, scarves, hats etc. and lie down comfortably on their mats. A man stands on the top of the Darwin staircase, perfectly aligned between two metal gongs. With a small hit, the sound vibrates across the room and what is called ‘gong meditation’, can now begin.

As people remain still, the sound from the gong continues. A cold breeze fills the room, and the request to grab extra layers of clothing becomes justified. The morning sun shines through the windows above, shining on the giant whale skeleton. With one final hit of the gong, the room comes to silence and the class comes to an end. While people start to slowly get up, others remain still, so at peace that they’ve almost fallen asleep.

As everyone packs away, I meet with Abby McLachlan, East of Eden co-founder. With a background in the music industry, McLachlan couldn’t imagine doing anything else, but her love for yoga emerged when she had her son.

“I was a single mom and I was still consulting in music, but travelling a long way across London to get to my yoga practice. I was aware that working in music wasn’t going to work long term as a single parent, so I thought that setting up a yoga studio was worth a go. It combined a passion – something I loved with potentially flexible working hours,” she told us. 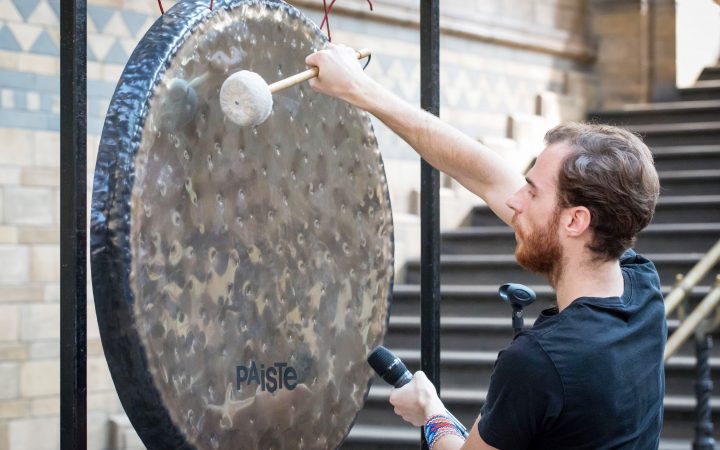 In 2015, they opened their first studio. Six months later, with a crowdfunded investment, they have created a large yoga studio in Walthamstow and a smaller pilates studio with bar fit classes which they opened three years ago.

When looking at expanding their classes, they came across a National History Museum opening. “They actually approached a few people about the idea of running yoga classes at the museum and I came back with a proposal based around evolution and the museum’s work. And I think that they liked the fact that my proposal kind of mirrored what they do,” McLachlan explains.

“They liked the combination of breath with movement with sound bath and it’s not something that any other museum has done,” McLachlan tells Artefact. “Like there are lots of yoga in cool places but nothing that combines other elements and I think that part of the amazingness of being in this space is just the being. And so by accessing the breath and by moving onto this kind of higher energy, higher consciousness sound bath, you’re kind of experiencing it in this kind of myriad of different ways. It’s not just the movements.”

If you ever stop to think about yoga, you wouldn’t see it as something necessary to do, but with being surrounded by the internet, stress and busy streets, it is important to step away for a bit. “I think anything that involves moving and breathing and taking some time for yourself is crucial,” McLachlan says. She further explains how the there is proof that with the busy world we live in, it is vital to take a step back and calm the nervous system and brain and practising yoga is a simple and accessible way of doing that.

“With the busy world that we live in, the volume around us, we often need to take a step back and be able to calm things down.”

As for the health benefits of yoga, it is more than just something for the mind. According to the Minded Institute “In 2017, 151 NHS employees were placed on an eight-week yoga in the workplace programme in order to evaluate staff absence as a result of musculoskeletal conditions.”

McLachlan supports the idea of the NHS getting behind the beneficial aspect of yoga and explains how it is not only something that can put yoga in a different light but can remove that level of intimidation when looking to join a class. “Where they don’t think they’re going to come in and think ‘I don’t look right, I’m not wearing the right clothes’, hopefully, that ends and the NHS rectifying that I think is a really important step in creating that accessibility.” 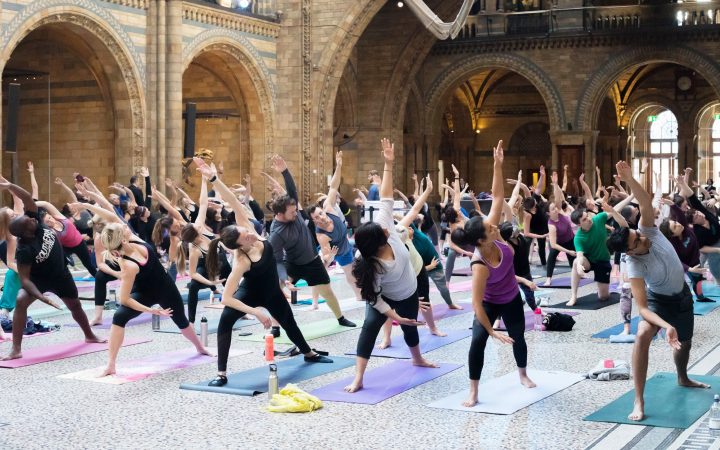 With social media platforms, specifically Instagram, the image of what yoga should be was changed to one of a perfectly-toned young woman with the expensive leggings. This in itself plays a major role in the number of people who will feel uncomfortable going to a yoga class, in fear of not fitting that ‘image’.

“Yoga has been around for centuries. It’s been kind of picked up in the west and there is definitely the misperception of it being for white, well-off women and that’s just not the case; it’s for everybody,” McLachlan explains. “I think moving away from that ‘Instagram’ imagery is important actually just in terms of the way it is perceived. We have women only yoga in the studio and so we’re trying to kind to offer it out to people who potentially don’t feel as comfortable practising with men, but half the battle is trying to get them through the door.”

Looking at the number of people attending this class alone does demonstrate that yoga is something that is being more accepted by any age and any gender; the mix of the class is wider than it possibly used to be. With support from the NHS, the numbers will grow as people will be directed to a more natural form of treatment.

As for East of Eden, they plan to continue their work with the National History Museum in the following year and plan on growing their own studio in the form of opening in new locations and looking to add more support to the general public aside from yoga classes.

While yoga may appear to be a community that some feel that they ‘don’t fit in’, there are many opportunities for anyone to join in. Truthfully, everyone needs a break from the busy city and even their own busy minds and access to that doesn’t have any age, gender or ethnicity limit.