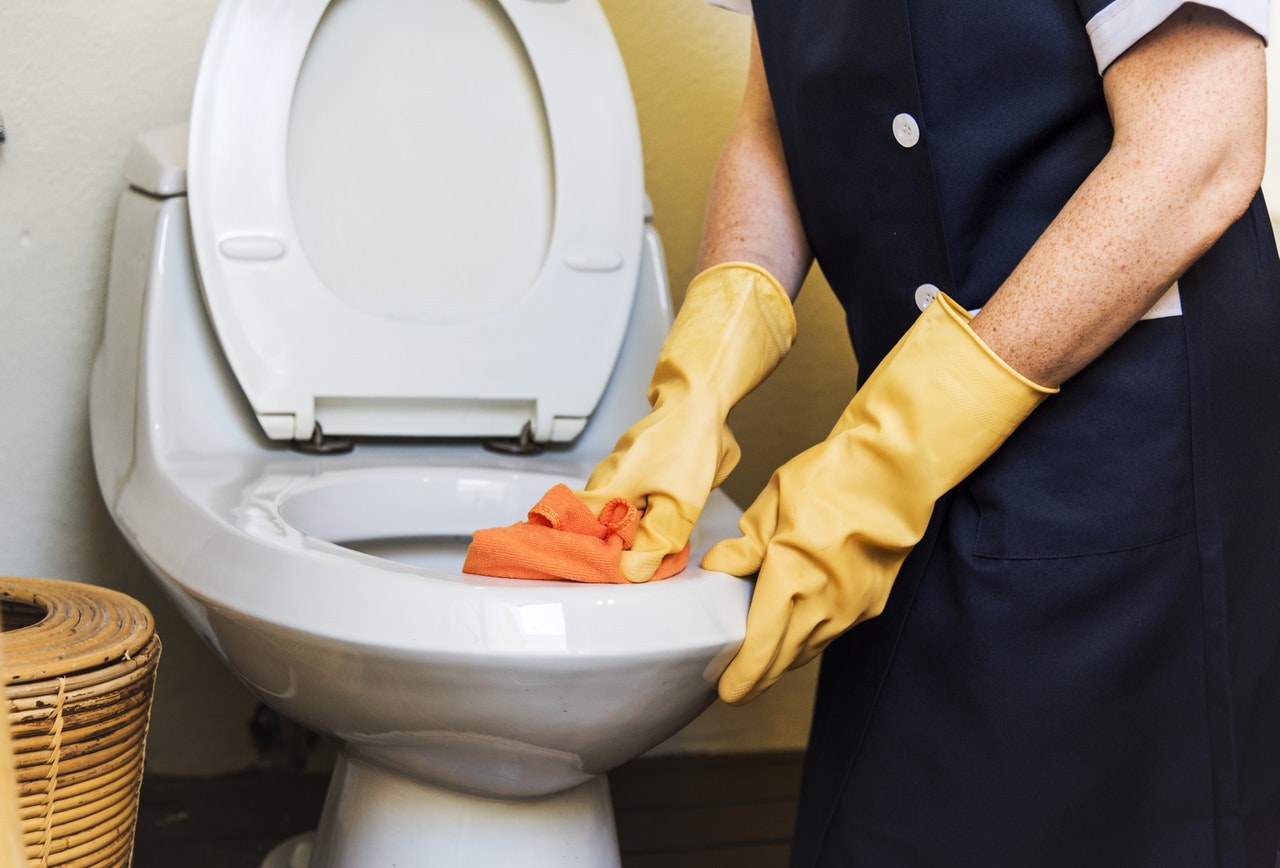 The entrance of Central Saint Martins is crowded with students eagerly leaving to go home for the weekend. It is three in the afternoon, and the cold air around the Kings Cross UAL campus is crisp, but the calming sun eases the intensity of the cold weather.

A friendly-faced, curly-haired girl approaches me, and I recognise her as Amber. She is a first-year Ceramics student at Central Saint Martins. She has been participating in the UAL End Outsourcing campaign since it started at the beginning of the 2018/19 school year.

She explains how she got into contact with this cause through working with people on the Elephant and Castle anti-gentrification campaign, “I connected with the group through Facebook, and I thought this is something students definitely need to be involved in, and I thought I could help out.”

Some might feel a guilty reluctance at perhaps not thinking to acknowledge this as a huge cause, but Amber attributes this to timing. “Part of the issue is the separation between students and other cleaners and staff. You just show up to class, and it’s easy to forget about who cleans and maintains areas that you’re working in.”

She presents a fair point. Without these workers that clean and maintain our university work environment, it would be a lot more stressful to go on with our days in class. Amber says “part of being at UAL is about making a change and making a difference in the world. If we’re not fighting for the rights of our own staff, then it is pointless.”

The ongoing campaign began to make some noise, with one of the first events have taken place on November 19th.  Cleaners from different UAL campuses protested outside of London College of Fashion, where the governors from the university were holding a meeting. The cleaners proudly held up a sign reading ‘UAL: end outsourcing’, and stood in solidarity that they will not be silenced. 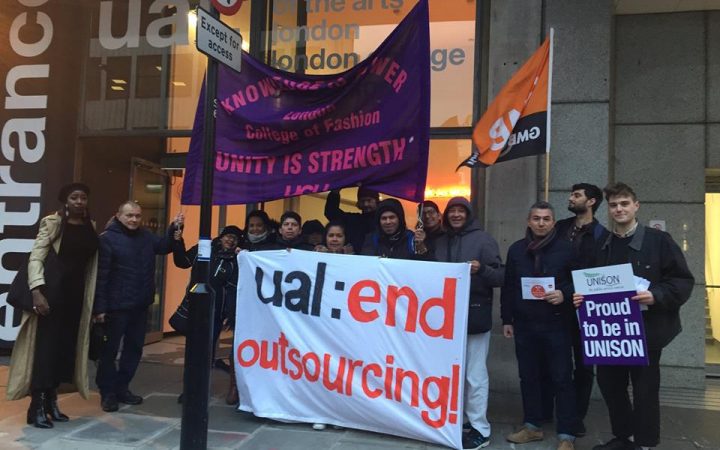 Amber speaks about the main issues that the campaign is currently facing. “The university management isn’t taking responsibility for their actions. If you look at the UAL website, the aims of the university include social justice. Doing this to their own staff across the campuses. It just makes no sense the words that they’re portraying to the outside world.”

What particularly makes the situation more concerning is that the workers that are being outsourced are majority migrant and BAME (Black, Asian, Minority, Ethnic)

Another aspect of this campaign that is also particularly unfortunate is these staff members already must work external jobs, which can hinder their fight for change. Amber speaks about this challenging factor, saying that these people must work other jobs and simply do not have the time to raise awareness of the campaign. Moreover, if the cleaners did try to participate in the campaign they may risk repercussions.

She talks about the power that we as students have: “We are in a really good position to support them, without having any negative impact on us. Even if you don’t actively support it, I think it’s so important to know what’s going on within your university.”

More than anything, this cause desperately needs more student involvement, to further ignite the movement. Amber talks about the need for this in the campaign, she says now the cleaners work these awful night shifts, so we as students are separated from them.

She speaks about this perhaps being the reason that students are not getting involved, simply because they are not aware. The students need to be getting involved or at least be aware of where their money is going.

As talked about previously, the campaigns first major event was a banner drop, where they handed out leaflets on the cause. Speaking about the success of this activity Amber says, “the thing about UAL being an Arts university, we are able to do some fun creative protests.” 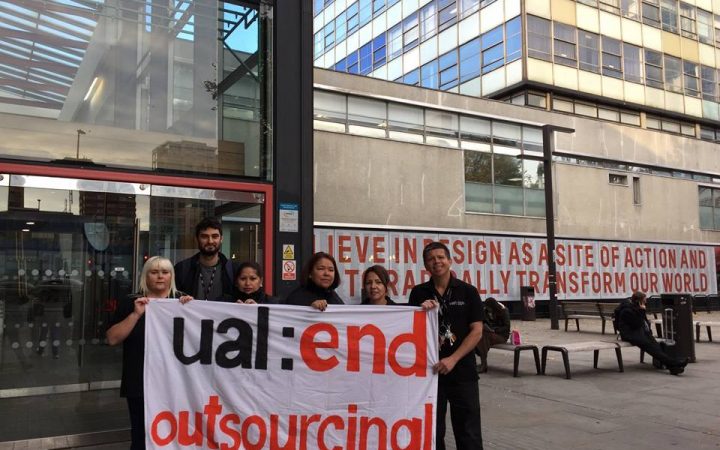 The campaigners hold getting to know the cleaners at high regard. Not only do they strive to raise awareness for this important issue, but they also make efforts to make this a personal experience between all the participants involved.

The Fine Art department had the open studio, so some of the students worked with the cleaners, and they showed a film about cleaners’ rights.

Perhaps one of the more challenging elements of the campaign is the publicity the university will face. “Part of the problem I think is that the management only seems to care about the outside worlds point of view. The reason we have such a good reputation is the students, not because of them.”  It is clear from speaking to Amber that this issue is something that her, along with the other campaigners are going to not stop fighting for.

Outsourcing is an issue that can deeply affect people’s lives. An example of this is that Bouygues has restricted the cleaners right to take continuous leave, as the petition statement from the UAL: End Outsourcing campaign on Change.org put it, “this disproportionately affects migrant workers, many of whom are now unable to visit family abroad as a result of these changes.”

I wanted to get a deeper understanding of the cause so I spoke to Toby, a Unison union representative who is currently employed at UAL. “Initially, from what I’m aware, both Matt (a GMB Branch Secretary) and I were locally negotiating issues on behalf of the cleaning teams that are employed by Bouygues.”

He says that neither of them were aware of each other’s involvement until an Estates Department meeting with two of the recognised unions (Unison & GMB). “I was there alongside other Unison reps and our Branch secretary. Where we raised the concerns of our members within the cleaning teams.”

He explains how they collectively went on to discuss the formation of a campaign that would push for the cleaners to be brought back in-house across UAL. “I think this all took place over the course of a month, and the actual campaign launch was probably when we all turned up to the UAL Governors meeting in October.”

“The thing about UAL being an Arts university, we are able to do some fun creative protests.”

The objectives of the campaign are simple, they are pushing for fixed hours, and more contractual parity with UAL employers, and obviously, the overall aim of in-housing the, cleaners. He highlights his reluctance to speak about some of the issues they are negotiating on a local level, as he would not want to hinder any potential progress in that area.

However, he says that “the cleaning teams across all sites have cited a need for fixed hours and better quality contracts as their reasons for wanting to start the campaign.

Alongside these issues, there’s also the ethical question about outsourcing which a lot of people including myself are particularly concerned about.”

Perhaps one of the most inspirational aspects of this on-going campaign is the fact that it is so heavily orientated and supported by the UAL student body. “I think the majority of the campaign members (aside from the cleaners) have been students at different campuses. Their activism and work in the campaign have been an amazing show of support for the cleaners,” Toby says.

However, there has not been much of a response of the campaign from the university itself: “They have tried to distance themselves from the campaign citing it as a Bouygues-centric dispute.”

All things considered, he continues to remain hopeful about the future outcomes, Saying the issue of outsourcing has been raised at the UAL Board of Governors, and they as a campaign are trying to raise awareness of the campaign via those forums, as well as overall campaigning.

These campaign goals are not exclusively subject to the University of the Arts London. 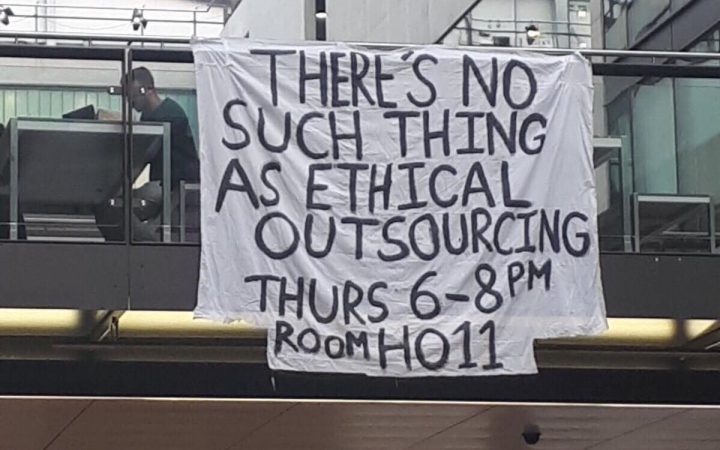 Picture of banner hung up at UAL campus, [Amber Genoni]

Although campaigns such as these can be very conflicting Toby says “My personal experience of the campaign has been amazing. It’s been great to see the overall support for the campaign from the staff and students at UAL, as well as seeing both Unison and GMB mobilise their membership in support of the cleaners.”

When asked to comment UAL management said “UAL aims to be the best in the world in teaching, research and knowledge exchange, but we cannot do everything for ourselves. Working with external partners is often the most effective way to provide high-quality services for our staff and students – better than we could achieve in-house. Staff employed by our external partners provide us with crucial expertise, quality and value for money. We, therefore have no plans to bring cleaning services in-house, because we value and respect the professional service provided by Bouygues.”

They also told us: “Alongside cleaning services, UAL works with many hundreds of people through other external service providers. We believe that our partners’ pay, terms and conditions should compare favourably with the wider market and include, at least, payment of the London Living Wage.”

The UAL management team also said: “We look to our external partners, including Bouygues, to listen to their staff and to manage them well. Our trades’ unions GMB and Unison have asked for the terms and conditions of Bouygues cleaning staff working at UAL to be reviewed. Bouygues is therefore in discussion with GMB and Unison to understand and respond appropriately to the issues raised.”

Featured image by Rawpixel from Pexels.com