Ana and I: The world’s most dangerous best friend

It wasn’t a notably cold day when I met 22-year-old student, Isabel. However, it was difficult to make out her slight frame as she came bustling into a trendy cafe near Bristol’s harbourside.

As she made her way towards me, fellow patrons cast her confused glances. Whilst a simple winter coat was all they needed today, Isabel was expertly hidden in exactly five layers. As she sat down and unravelled herself from the multitude of fabric, she quickly explained that this was not a fashion choice, but an attempt to protect herself from the elements.

Suffering from an eating disorder (ED) for over seven years, it’s fair to say Isabel is probably more adept at spotting fellow sufferers than most people.

“You’ll be able to recognise us,” Isabel joked. “A lot of people who are dressed like Antarctic explorers will probably be anorexic.” She won’t be the only one who will be experiencing this reaction to the mellow weather. Countless people in the UK battle daily through temperatures that, to them, feel sub-zero.

Charity Beat Eating Disorders (Beat), reports that an estimated 1.25 million people in the UK are currently suffering from an eating disorder (ED). Isabel can recall having disordered thoughts from the age of 15, thoughts which slowly developed into restrictive eating, and, eventually, anorexia nervosa. Her 18th birthday was spent in hospital surrounded by fellow patients, being treated for her ED, alongside anxiety, borderline personality disorder, and depression.

She remembers a young girl she saw on the tube this morning, wearing far too many layers that should be comfortable. Isabel claims with certainty that she was “One of us.” It’s easy to tell, she explains, if someone is suffering from an ED. “It’s all in the eyes. There are many illnesses which can make people lose weight, but with an eating disorder, it’s obvious what’s wrong. You look dead inside.”

“You’d be surprised how many [of us] are out there,” she continues. “It’s sad when you realise how many people are walking around lifeless.” Unfortunately, this image isn’t a scene from a post-apocalyptic film. This is real life, and it’s getting worse. The Guardian recently reported statistics showing that in-patient admissions have doubled over the last six years, with 16,023 patients being admitted between April 2017 and April 2018.

Contrary to popular belief, anorexia nervosa is the least common ED, with only 10% of sufferers being anorexic.  However, it does have the highest mortality rate. “Ana would be proud of that,” Isabel explains. “You should be proud that your illness is the most dangerous and has the highest death rate.” This mentality probably raises a lot of questions for those unfamiliar with the world of eating disorders but is an overwhelming reality for those who suffer.

First of all, who is Ana? Well, if you’ve ever found yourself on the wrong side of the internet – where black and white blogs share gifs of the rain alongside triggering content, you might have heard the name before. However, from the tentative look, Isabel gives me when I ask her to elaborate, it seems as though Ana is an incredibly complex figure that only a few really know.

“It’s an incredibly lonely illness. At the end of it, it’s just you and her.”

“It’s hard,” she says, taking a sip of her tea (with dash of skimmed milk and zero calorie sweetener, not sugar). “Unless someone’s had it, they wouldn’t really understand it. I don’t mean that in a gatekeeper kind of way, it’s just, well, people would think I’m weird.”

Determined to stop the stigma surrounding eating disorders, however, Isabel is determined to open up a narrative surrounding the lesser-known side of anorexia. “I’m tired of everyone picturing a pretty, skinny girl refusing a cupcake when they hear about [eating] disorders. The reality is you lose all your hair, your skin becomes so dry it flakes away, and you smell 24/7,” she says with exasperation.

On that note, she decides to address her “worst enemy” that goes by the name of Ana. “Basically,” she pauses. “It’s like having a best friend. A best friend that constantly controls and bullies you, telling you you’re not good enough.”

She offers me a small smile, but it’s strained, and she continues with a slight sigh, “Honestly, the most exhausting thing about having anorexia is the constant voice in your head. She encourages you not to eat, calls you names, and is always counting calories.”

The charity, Beat, list “withdrawal and social isolation” as one of the major behavioural signs of someone suffering from an eating disorder. Isabel nods intently when this is mentioned, and immediately offers Ana as an explanation. 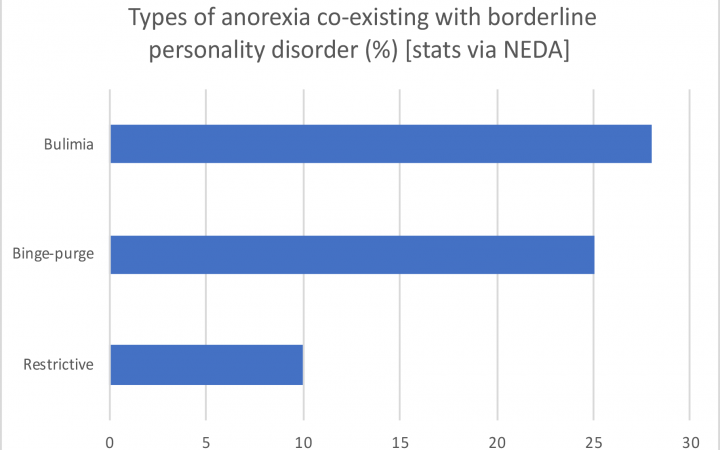 “She pits everyone against you. She tells you everyone is trying to make you fat and makes you super paranoid.” Match this with increased irritability, depressive thoughts, and a distinct lack of energy, and it’s easy to see how people can fall victim to Ana’s grasp. “It’s an incredibly lonely illness. At the end of it, it’s just you and her [Ana].”

Phoebe, 21, a student who is also in recovery for anorexia, is one of those who reject it. She was hospitalised when she was 17 and has been in recovery for the past four years. She wasn’t introduced to the idea of ‘Ana’ until she was being treated as an out-patient, and it’s something she hasn’t found helpful in her recovery.

“I don’t want to knock it for others. I know so many people who credit their recovery to it – or, ‘her.’ It could be because I didn’t try to separate myself from my illness until later on, but I feel like it makes me lose a sense of self when I think about it. My illness became such a part of my personality, I just don’t feel like I can separate the two.”

John McGuirk, who is the team leader for 1:1 Therapy at Off The Record Bristol, explains why recovery is individualistic, and why there’s no straight line to recovery for young people. “Identity is at the heart of a young person’s life. It’s part of development to form their own identity. As such, major processes that occur during this stage of development are felt like part of the young person’s identity, as opposed to a process that is separate from this,” he says.

“When I was in the hospital, my Doctor asked me a simple question when I was choosing my food: ‘Do you want this or does Ana?’”

“Also, anyone struggling with their mental health for a certain period of time can get stuck with a story. Other people can get accustomed to seeing the effects of the young person’s mental health, so that, even when these effects have gone, these people keep a look out, expecting them to return as if recovery isn’t fully believed yet. It can take some time for people to let go of their stories.”

Whether you’re recovering from an eating disorder or addiction, there’s no straight path to recovery, which is why there is so much debate over the better method to treat eating disorders.

“For me, it’s something that has really aided me in my recovery. When I was in hospital, my doctor asked me a simple question when I was choosing my food: ‘Do you want this or does Ana?’ That took me back, and it was the beginning of me changing my relationship with food all over again,” explains Isabel.

McGuirk expands on the idea of personifying anorexia in recovery. “It depends on the person. Everyone is different. But, yes, it can be helpful to personify mental health issues, especially if they’re wrapped up with the young person’s identity. Often, the young person gains a new perspective on themselves and the mental health issue when this is done well, and healthy dialogue can be opened up.”

Once this dialogue is opened up, recovery may come easier. McGuirk explains: “Surprising things can be discovered, about the good intentions of the mental health issues (such as an attempt to protect the young person, or an attempt to establish some control). While also, if done skilfully, a healthy negotiation can be reached between the young person and the mental health issue.”

Speaking to Isabel, it becomes clear personifying her mental health issue was a vital tool in her recovery. “Once I knew people could see a difference between myself and my anorexic self, it motivated me to get better. I wanted to be myself again, not a hollow shell.”

Unfortunately, the way anorexia can take over a person means that a hollow shell is often all that’s left. Sufferers can say goodbye to their hobbies – soon they’ll have a whole new list of interests. Interests which will become an obsession that will consume their entire lives. Hoarding food, excessively exercising, walking everywhere and daydreaming about food are just some of the things anorexics engage in daily.

While we discuss the many irritating – and time consuming – things an eating disorder can make you do, Isabel provides an anecdote that showcases some of the more ridiculous activities a calorie deficit can lead to.

“I remember I used to wake up really early and make everyone breakfast. I wanted everyone in my family to eat lots of food – I know that sounds weird, but it made me feel powerful. So, I’d layout this huge buffet every morning. I’d make menus and place cards and greet them like it was a proper restaurant. The funniest thing is every morning I’d be like, ‘If you have any questions just ask’ – what would they need to know?”

At this, she laughs. “It’s not like it was a nice gesture, either. I’d get really angry if someone didn’t finish their food and a lot of the time I’d end up shouting. It was a mess.”

Thankfully, Isabel has been in recovery for five years. Although the road to health isn’t easy, she’s determined not to go back to the days of crying, yelling, and lying.

“Ana took away my personality – I hated who I’d become. She made me aggressive and cruel. I don’t want to be a reflection of my illness any longer, I just want to be me.”

If you are struggling with an eating disorder, you can find help at beateatingdisorders.co.uk or mind.org.uk

Featured image by VovanIvanovich via Shutterstock