Madrid in under two days

Madrid, the capital city of Spain since the 17th Century, seems to be placed second when visiting Spain, as most travellers head for the sandy beaches and the nightlife in Barcelona as oppose to the vibrant capital getaway. However, I had a chance to visit the beautiful capital and take in the breath-taking views, arts and culture Madrid has to offer.

Artefact has compiled a list of places to visit while in Madrid.

Travelling to Madrid is simple, with direct flights to the heart of Spain running daily from all UK major airports. You will find yourself immersed in Spanish Culture in under three hours.

Once you arrive, you can head from the Adolfo Suarez Madrid-Barajas International Airport to the city centre via various transport options:

By Taxi: Taxis from Madrid Barajas International Airport will get you to the city centre in under 30 minutes for around €25 (£22.50).

By Metro: You can hop on a train from the Airport terminals T2 and T4 to Nuevos Ministerios (Madrid’s City Centre) in just 15 minutes.

Trains run from the airport every day from 6:00 am to 2:00 am and leave every five minutes. Also, note that entering and exiting the airport via metro requires a supplement charge which is currently €3 (£2.70)

By Uber: I mean could it get any simpler? Just make sure you select the right pick-up terminal when requesting an Uber from the airport to your destination.

By Bus: The Barajas Airport Express claims to run ‘24 hours-a-day, 365 a year’ so you won’t get stranded at the airport waiting for a Taxi or the Metro Station to reopen. Tickets cost a mere 5 euros and take roughly 40 minutes to reach Madrid’s city centre. 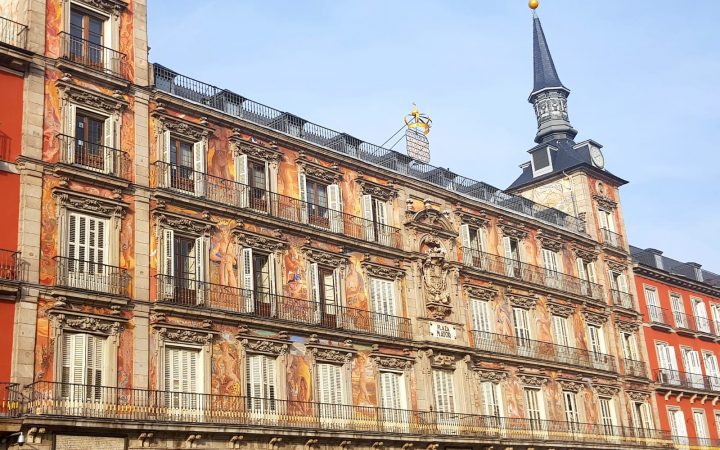 Built in the late 15th Century and once known as Plaza del Arrabel, the centre of Old Madrid, where the town people used to visit for food and clothing.

Plaza Mayor de Madrid is now a public space famous for its Spanish architecture. An open space where tourists and locals can explore the square to take in the picturesque surroundings or eat at one of the many restaurants located within the Plaza Mayor de Madrid.

Chill Out at Puente de Toledo or Arganzuela Footbridge

Puente de Toledo was built in the seventeenth century by Spanish architect Pedro de Ribera. Nestled in the heart of Madrid in which the river Manzanares passes through seems to be the perfect place to sightsee before entering the central area of Madrid. The Puente de Toledo bridge also features amazing illuminations at night and is the ideal place for landscape photography.

Located precisely across from the Puente de Toledo bridge is the Arganzuela footbridge, which is a newly built bridge in Madrid, that has become a tourist attraction in its own. Created by Dominique Perrault Architecture, who is famous for designing the National Library of France and winning the bid to help construct the Olympic and Paralympic Village for Paris 2024.

Tourists and Locals adore the Arganzuela footbridge due to the fact you can cycle along the bridge by using the designated bike lanes or chill out on one of many benches within the span.

Now you can’t visit Madrid which trying Jamón. Jamon is essentially ham; however, the Spaniards seems to have mastered how meat should taste. The restaurant serves up beautiful dry-cured ham.

Museo Del Jamon owns over ten branches in Madrid all of which lets you explore the history of Jamon and their restaurants which was founded in 1978 by two brothers, Luis and Francisco Muñoz Heras.

We recommend visiting the branch just around the corner from the Plaza Mayor located on Calle Mayor, as this location has preserved the historical building and decorations since the 1970s. 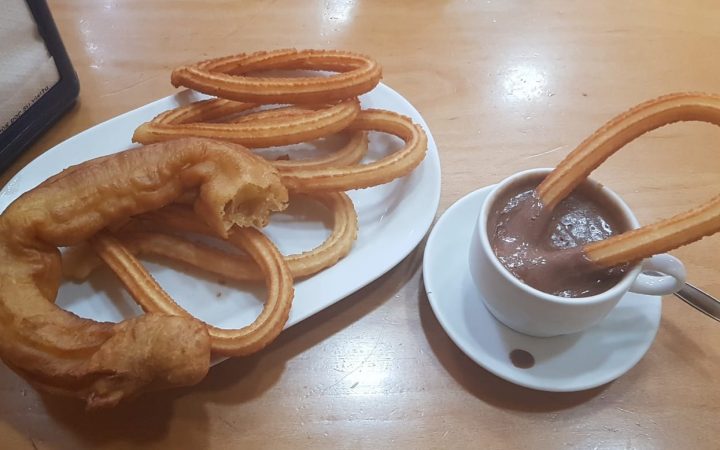 Chocolatería San Ginés have been serving churros, coffee and cakes since the 18th Century and they are traditionally open every day of the year.

According to Culture Trip, this is “Madrid’s most famous chocolate shop” and is open 24 hours every day, due to how busy this place usually gets. “It’s a tourist attraction in Madrid,” says the waiter who bought our order to us. Served two types of Spanish treats. Churros and Porras.

Churros which are long skinny sticks of dough and Porras which are more doughy and thicker for picking up all of that hot chocolatey goodness. A plate of Churros and Hot Chocolate shouldn’t cost more than €4 (£3.40) 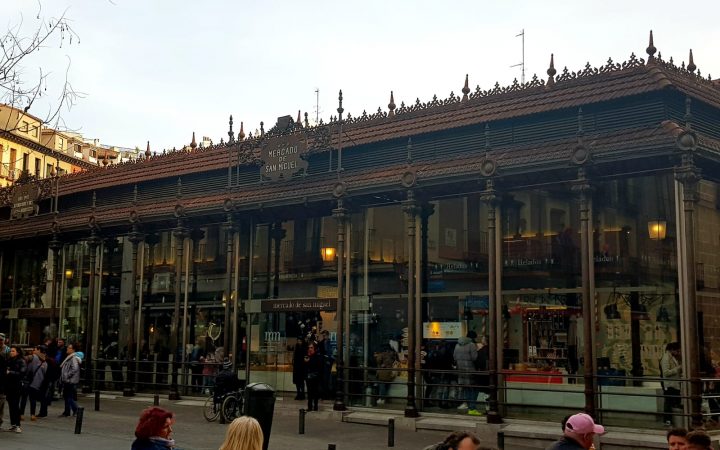 The exterior of the San Miguel Food Market [Dwayne Maxwell]

San Miguel’s Food Market is one of the oldest food markets in Madrid. First opened in 1916 and later renovated in the late 2000s to now house very new and hip Spanish fusion restaurants.

According to esMadrid, the San Miguel Food Market gets ‘over 10 million people visits the market’ Making it compete against the Mercado de La Boqueria food market in Barcelona.

San Miguel is the perfect place to try various tapas, croquettes, patatas bravas and of course jambón its worth well the visit.

Madrid in under two days