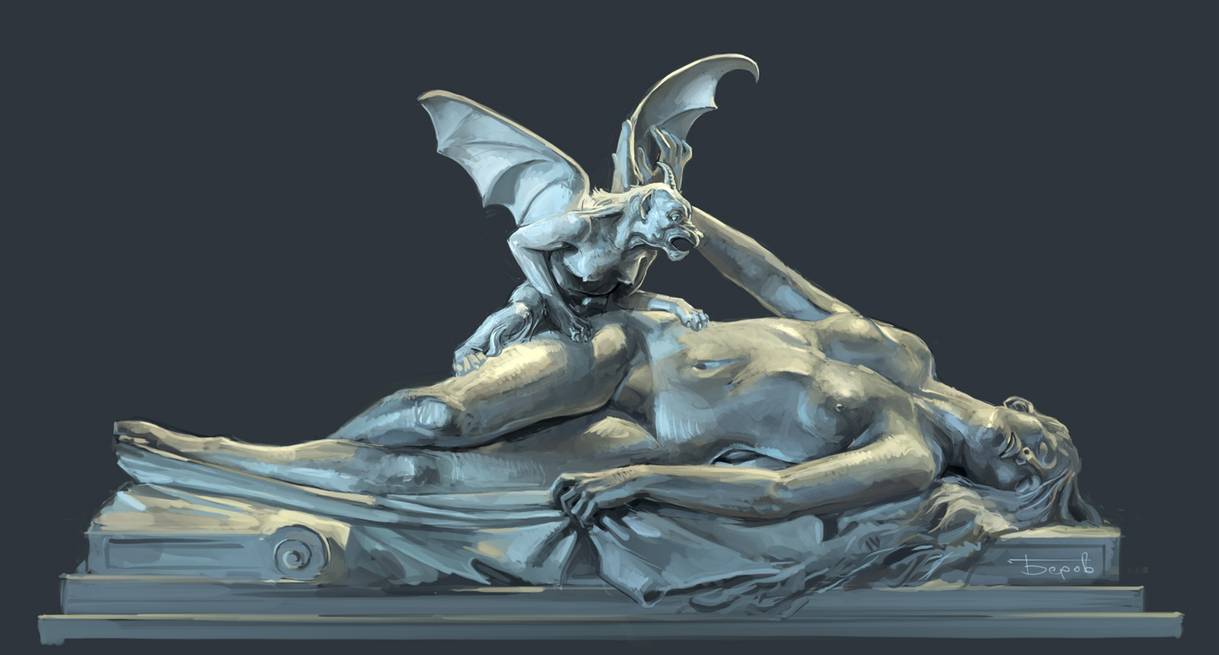 Frozen and frightened, the unsettling feeling of someone uninvited in the room. Suffering in silence, unable to move or make a sound, trying to wake up and escape the darkness.

You feel completely incapacitated with the fear washing over you. This may occur every night or once in a while, nevertheless, each time will be more terrifying than the previous one.

On a night in mid-January David could feel a heavy disturbing presence on his chest; He tried to scream but no sound would materialise, he felt helpless and terrified. As he woke the feeling of confusion and unsettlement came over him. Was it a paranormal experience or an especially horrific and realistic nightmare.

“I wish I could put into words the fear I felt that night. I have never been scared of ghosts or had any paranormal experiences. But this. This was the only thing I thought it could be, I am not religious at all, but that is what it was.

“This is the only way I can explain it: it was dark around five in the morning, I could see a figure clearly, it was a man around seven foot, huge and terrifying. At first I thought he was a burglar, but then he started to come closer to my bed, closer to me. I could feel it had bad intentions, he felt threatening like he was going to hurt me.

“I tried to scream for help but no words would leave my lips, I tried to move but my body wouldn’t let me. I was stuck and forced to live out this terrifying scene that was taking place in my bedroom, in my bed. I woke again this time able to scream, the man had gone leaving without a trace.”

David felt anxious and afraid to sleep at night for several weeks in case he experienced the same nightmare again. After googling and watching Youtube videos, David found that many others had also experienced similar night terrors.

Weeks had passed by when he was visited by the same dark presence, equally as terrifying, if not more. But this time he knew what it was, a sleep disorder called sleep paralysis.

“To be honest at first I felt uneasy about sharing my experience with anyone, even my girlfriend. I was afraid of them laughing or judging me. It did take over my life for a period of time, mainly because I was exhausted from avoiding sleep. I had read online that sleep paralysis is common if you travel a lot, which I do. I tried to avoid taking naps but I just ended up feeling exhausted.

“It really helped reading about it and other peoples experiences, kind of confirmed to me that I wasn’t actually going insane. I will go weeks without having sleep paralysis and then one night it’ll just creep up on me. The same haunting feeling comes to me. I feel trapped, frozen and vulnerable.” 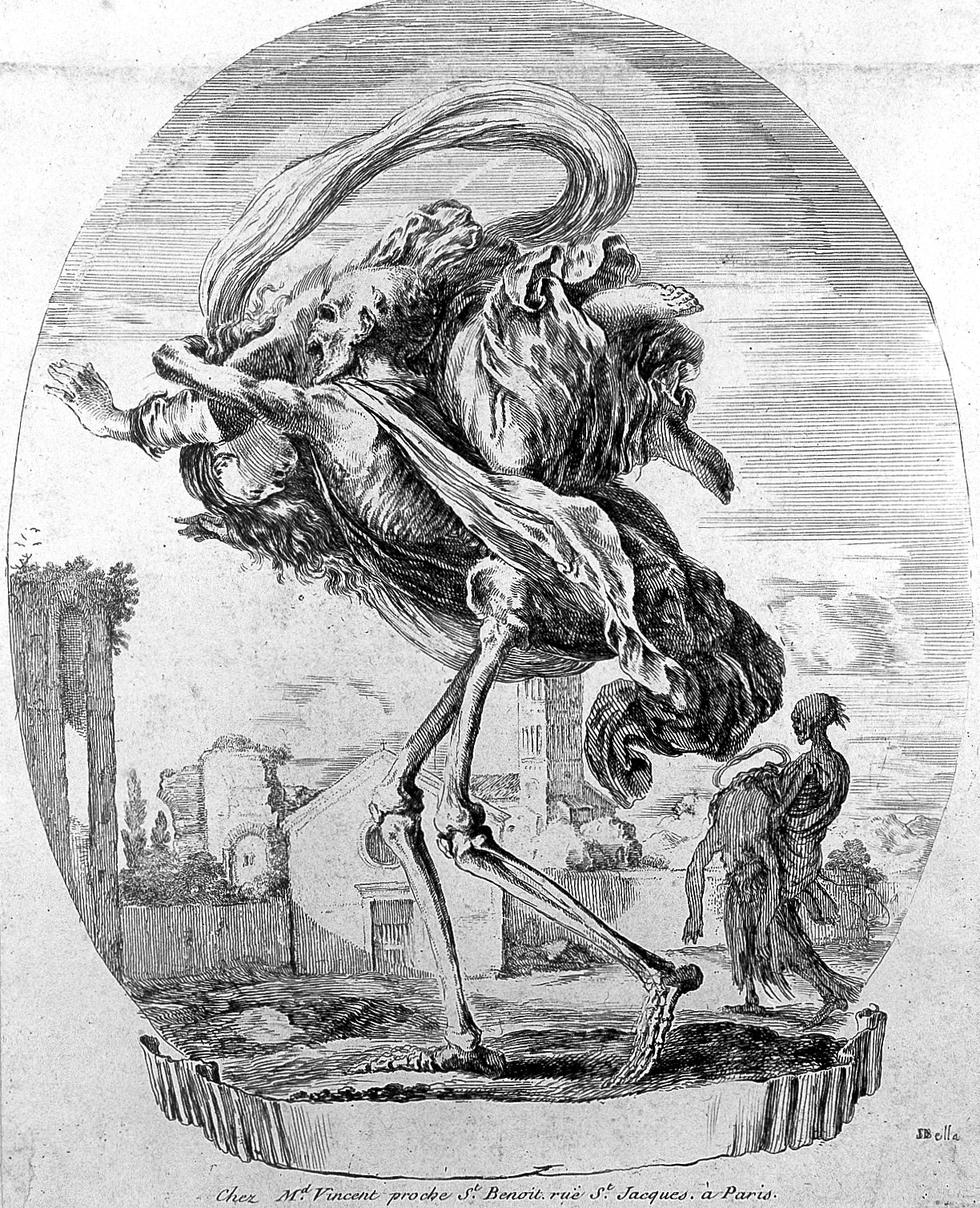 Death carries a woman over his shoulders – Etching by Stefano
[Wellcome Library, London]

Sleep paralysis occurs when a person is in a state of rapid eye movement sleep (REM). REM is when the brain is active and awake but your body is still asleep, this is why you are unable to move. REM sleep tends to happen when you are waking up or falling asleep.

The condition can affect people of all ages but is most common in teenagers and young adults. Sleep paralysis should not last more than a couple of minutes, theoretically it is harmless however can be extremely terrifying and leave long term effects. For instance, a person who experiences sleep paralysis more than once may become anxious and afraid of sleeping.

David is 27 years-old and his occupation requires long hours and demand him to travel, therefore his sleeping pattern is irregular. These could be some of the factors that are causing him to have regular sleep paralysis.

The main symptom of sleep paralysis is being completely aware of your surroundings, but temporarily being unable to move or talk. This is especially disturbing because you are somewhere familiar and not somewhere imagined. It makes it harder to understand the differentiation between dream and reality.

According to the NHS website during an episode of sleep paralysis you may:

Historically and culturally, some people refer to sleep paralysis as a sleep demon or incubus, something that has dark and bad intentions. There are many interpretations of what sleep paralysis is and many cultures believe that it could be the work of supernatural beings.

Some Arabic cultures attributed these symptoms to encountering a Jinn, a mythological spirit. In Japanese tradition, sleep paralysis is due to a vengeful spirit who suffocates his enemies while sleeping.

A more terrifying interpretation of sleep paralysis comes from a Brazilian folk tale, an entity known as ‘Pisadeira’ is described as a crone with long fingernails who lurks on roofs at night and tramples on the chest of those who sleep on a full stomach, which is facing upwards.

It is clear that people have been experiencing sleep paralysis for centuries, each culture has its own tale to explain the spooky events. 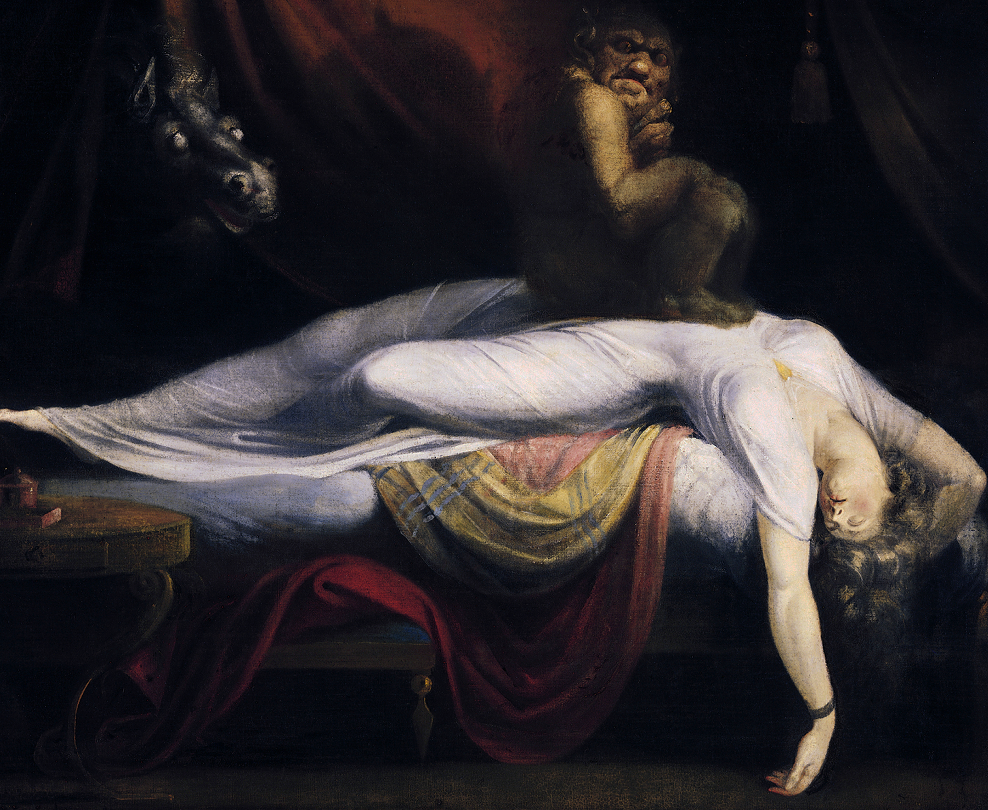 The Nightmare, painted by Henry Fuseli, 1781.

Sleep paralysis affects less than 8% of the general population and often occurs when a person is extremely stressed and highly anxious. People who are frequent travellers, work long hours and have an inconsistent sleeping pattern are more likely to experience this phenomenon.

David joined a group that tackles the subject of sleeping disorders that meet up once a fortnight. Groups like these are set up by local councils and give people who are struggling with sleeping disorders the opportunity to talk to like-minded people, where they can share their own experiences and how they have overcome these issues.

As a result of joining this group David told us that his mental health has improved significantly and is able to control and understand his sleep paralysis much more.

All Images by Eugene Thivier via Wikimedia Commons.

Fed up of not getting a good night’s sleep