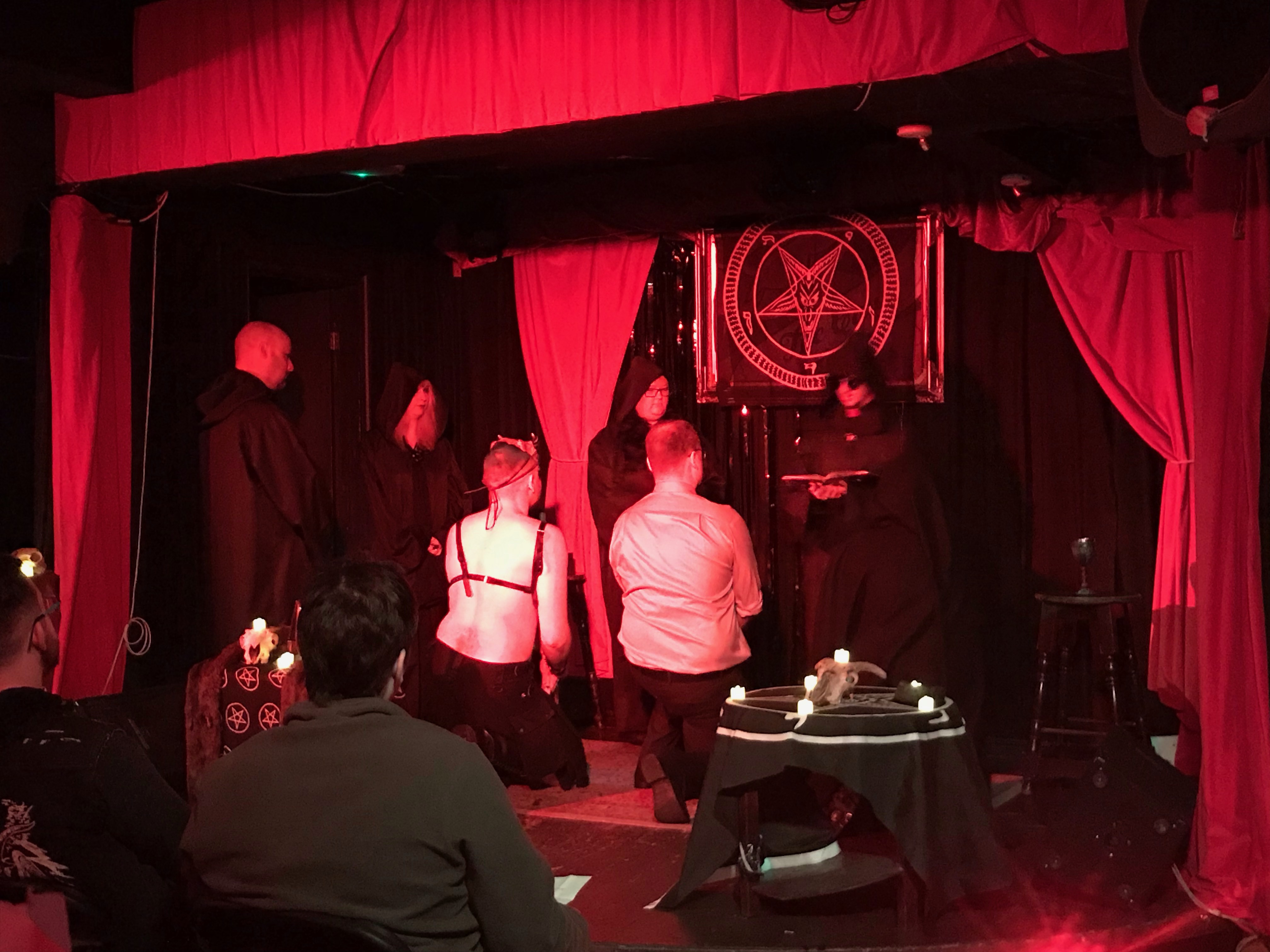 On a cold February morning, The Cavendish Arms in Stockwell hosted the UK branch of The Satanic Temple. As a passer-by walking into the pub on this gloomy day, you may be shocked at the events that were about to prevail. However, at the beginning, it appeared to a as normal at ‘The Cav’, a delightful gaggle of people gathered, with pre-ritual drinks flowing.

The clock strikes 2:00pm and it is apparent that it is time to engage in what the distinctively-dressed group has travelled for. The usual attire of the stage room is now submerged in a deep red light. A pre-recorded whisper of a Latin phrase fills the space, as four hooded figures approach the stage. “Hail Satan!” – a roar from the crowd emerges, as the sign of the horn gesture is raised in alliance. I stand at the back of the room, camera at the ready, observing the ritual they call the ‘unbaptism’. 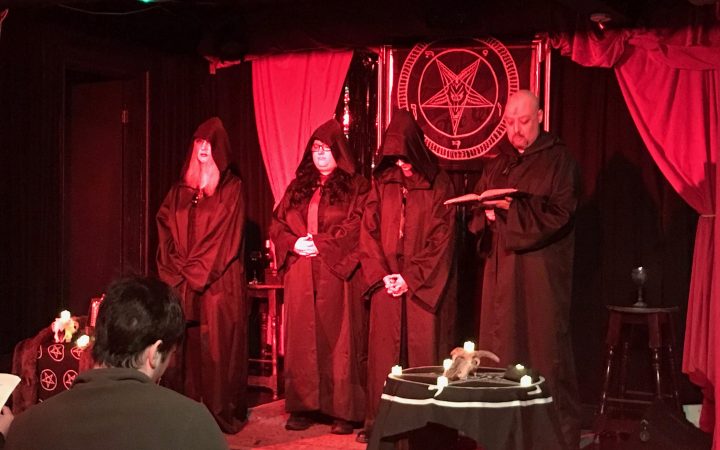 The four Chapterheads performing the ‘unbaptism’ ceremony, on stage at the Cavendish Arms [Cree Brown]

In the Roman Catholic religion, to be baptised means you are bound to the church for life – unless you are excommunicated – another way, as some would describe it, of escaping the clutches of religion. Similar to Christians, a baptism proves their devotion to God, however, some adults are now repenting this process, as they feel that the decision their parents made for them when they could not make it themselves, no longer represents them as a functioning member of society.

Unbaptisms, or as they are sometimes referred to, debaptisms, are defined as someone who is pre-baptised. Usually used to describe an infant who is not yet, as some would say, ‘purified’ in the eyes of the Lord. However, in this case an unbaptism means a whole different thing. Defined by The Telegraph as: “An atheist […] trying to get himself “debaptised” from the Church of England because he believes he was accepted into the religion without his consent,” the past few years has seen the buzzword unbaptism associated with both atheist organisations such as The National Secularist Society (NSS) and can now be found within The Satanic Church.

Although both these are opposing practices, one being a certificate and the other a ritual, they ultimately have the same consequences – the unbaptised person is no longer confined by traditional religion.

The National Secularist Society are an international organisation based in the UK that challenge religion’s disproportionate influence on governments and in public life. Describing themselves as a non-party political organisation, they aim to support secular cases in the courts, lobby policy makers, and provide a secular voice in the media. 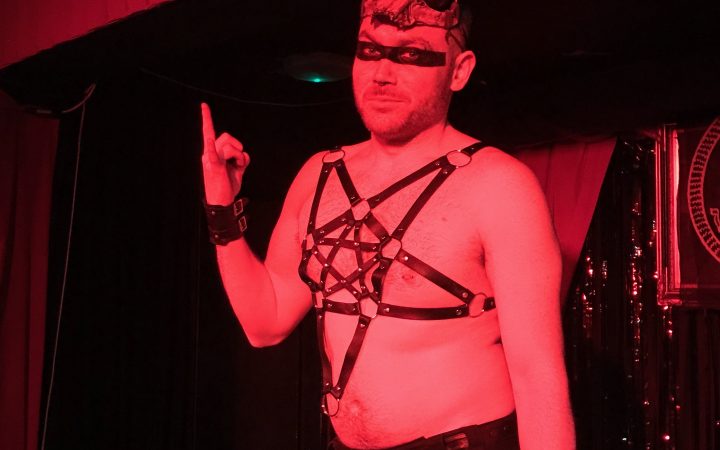 A member of the Satanic Church, in traditional attire, sporting the horn gesture [Cree Brown]

As well as the political aspects, their ‘Certificate of De-baptism’ has accumulated over 100,000 points of access since being on put on the website. However, in a brief phone call with the NSS they explained that they no longer carry out the de-baptisms.

Although just a certificate, according to Terry Sanderson, President of the NSS, the demand for the concept of depbatism “indicates that people are not just indifferent to religion – which has been the traditional British approach – but are actually becoming quite hostile to it.”

However, the Satanic Temple does things a little differently.

Classed as religion, the Satanic Temple are dedicated to Satanism and refer to their version of religious reading as the Satanic Bible. To Satanists, the process of unbaptism requires a ritual that verifies the process, as they believe, in the eyes of Satan.

Damian and Amy, the co-chapterheads of the Satanic Temple UK explain that, in relation to Satanism, the unbaptism ceremony is, “a ritual unchaining from superstition and arbitrary theistic authority.”

The ritual goes as follows: The four hooded figures are the higher members or Chapterheads of the church. They start by approaching the stage in pairs and kneeling before each other – taking turns as the ‘blood of Satan’ (a silver gauntlet of red wine) is dripped onto their foreheads, one by one. 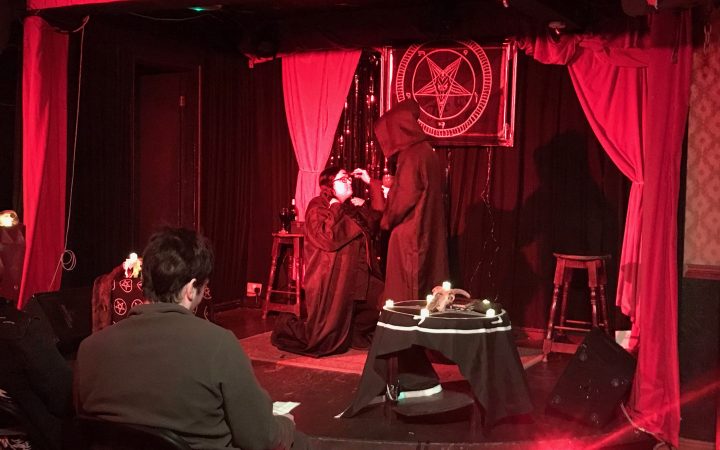 The Chapterheads then recite a passage from the Satanic Bible, every section ending with their own version of ‘Amen’ – “Hail Satan.” This is then chanted back at them by the audience (the other members of the church) and they welcome onstage the members who are about to be unbaptised.

Once the members are kneeling before the church highers, they are asked the question: “Do you renounce Christ?”, and in response they say, “I do renounce him.” After this process, the members stay kneeling and are offered the ‘blood’ and the ‘body’ (small wafers, similar to that of communion wafers) of Satan to consume. 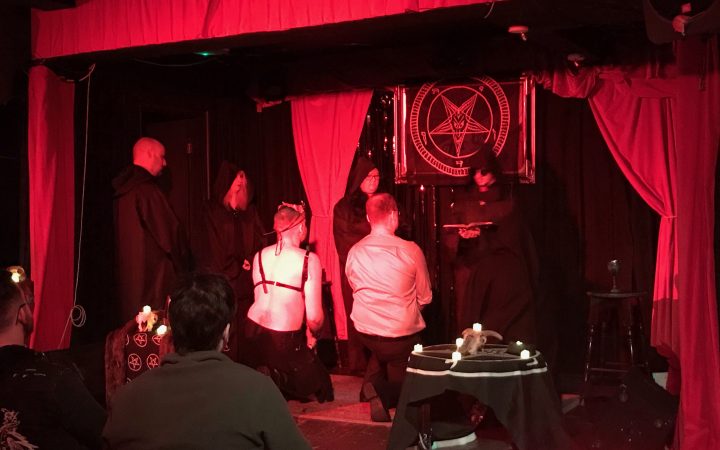 Finally, the freshly unbaptised members stand and call out “Hail Satan!” This is again bellowed back at them from the audience – an extremely powerful element to the ritual that filled the entirety of the Cavendish Arms.

The reasoning for the unbaptism ceremony, as explained by Damian and Amy, is also down to the lack of choice that being baptised as an infant gives you. “In the UK many of our members were baptised into the church against their will as children, unable to make an informed choice. As Satanists our wish is often to sever these ties.”

They say the unbaptism ceremony is for any member of the Satanic Church who feels they “would benefit from the ritual personally,”  and added: “Our members feel empowered, freed, and forge a closer connection to their satanic identity in the rejection of the baptismal ownership under god.”

Damian and Amy relate it purely to their members’ personal choice: “It’s different for everyone. Some people do it as a way of letting go of their past, others may do it to feel part of the community. It’s a very freeing and personal experience.”

Speaking to a few members fresh off the stage, the feeling that both the Satanic Church and the unbaptism allows them a sense of community, seems to be unanimous. Alex, from Wales, told me: “I am a member of the Satanic Temple as I reject a lot of societal norms. It’s a group of people that could feel like outsiders, and they have come together; this is like my family.”

George from Canterbury, says in regard to his unbaptism experience, “I just loved it, it was brilliant, I can’t stop smiling!” With enthusiasm in his voice, he added: “I love the community, I’ve gone a lot of my life without that sense of community, so it’s nice to feel like we now have somewhere to be- somewhere that accepts us for who we are.” 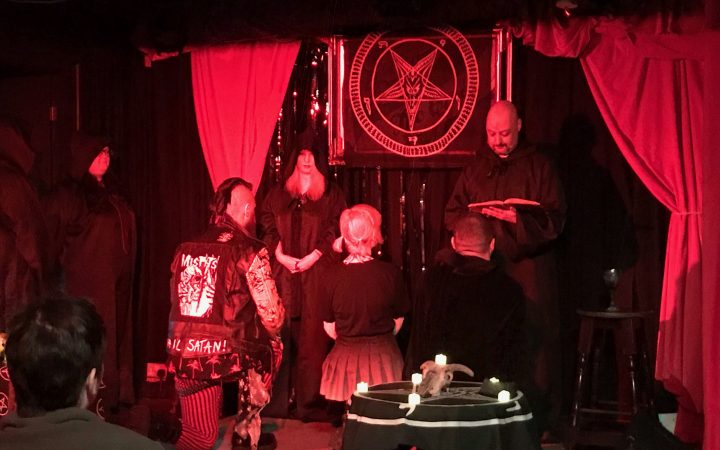 A pale, pink haired, young woman with black out contact lenses, wished to be completely anonymous, however, she told me that getting unbaptised is personally “sealing the deal”.

“It was really empowering as I was raised in a very Christian household and it took a while to break away from that,” she said. “Satanism has really helped me get over a lot of the traumas that come with being raised Christian.”

When asked if being unbaptised is vital for members of the Satanic Church, Damian and Amy say that it is solely based on personal choice, however, they put the popularity of it down to the fact that, “[some members] find it important as a part of their satanic self-identity.”

Some people suggest that an unbaptism is meaningless due to the fact that it cannot be officially recognised by the Church of England or the Government, but Amy and Damien say that this is unimportant to them as they do not place any value on the church’s meaning of traditional baptisms. “As a non-theistic religion, we do not put stock in the traditional baptism to begin with, though our ritual will not remove names from any baptism records, it is equally as powerful in terms of its importance to those who take part.”

It seems the overriding feeling behind the ritual of unbaptisms for the Satanic Church, as well as the committed membership, is to create a sense of belonging for individuals who are lacking in societal acceptance. A warm and welcoming message from a community that is so often thought by many to be ‘evil’.