Inconspicuously tucked away in a warehouse complex just off London’s Hackney Downs, you can find the unassuming black doors of Barberette.

Inside however, amongst the snipping of scissors and familiar buzz coming from a pair of clippers, classic throwback hits from the 90s play through a discreetly-placed speaker. A backing track amongst the hub of friendly chatter.

In the corner of the shop, the bright glow of a neon sign depicting the words ‘hair cut’ and a traditional red and white barbers pole is hung on a wall.

Beneath the leather of the barber’s chairs, freshly cut hair is swept into piles. Positioned above the mirrors, hand drawn images of hairstyles based on cuts requested from real clients including ‘the pixie’, ‘the bowl’ and the ‘Eton crop’.

But this is no regular barbershop.

Founded in 2012 by Czech born Klára Váňová, Barberette was created with the intention of providing cuts with a gender neutral approach.

With an Instagram bio representing the the hashtag #dontpayextraforyourgender, rather than charging clients different amounts based on their gender, this barber shop challenges sexist pricing structures by running a policy that sees charging cost determined by how long a haircut takes in total. 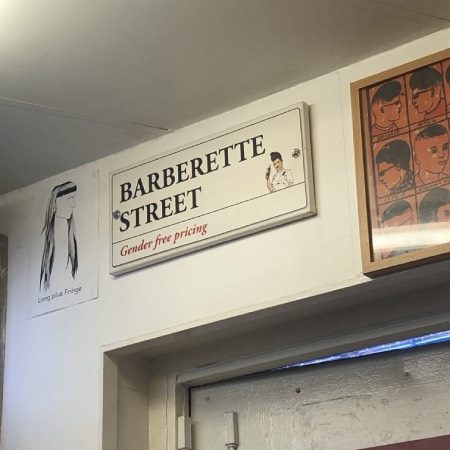 Inside the salon of Barberette in Hackney [Anezka Turek]

Speaking from her salon in Prague, where Barberette’s twin shop opened in 2017 after its immense success in London, Klára reflects on where her journey began almost 10 years earlier. “I would say that I started Barberette because of my own frustrations when trying to find somewhere I could get a haircut the way I wanted it, in the environment I wanted it,” she explains.

After moving to London and feeling uncomfortable as a short haired woman in the male-centric environment of regular barber shops, Klára began studying hairdressing night courses on the side, all whilst jugging an office job full time. “In 2012 when I first started there weren’t really any other cool barber shops around London,” Klára states. “I felt like I couldn’t tell the person cutting my hair ‘oh, this is a little bit too manly’, so a lot of the time I would just leave the shop unhappy with how my hair turned out,” she continues.

With a trip to a regular hairdresser costing far more than a visit to a barber shop, despite a request for the same cut, Klára began to notice a clear gender inequality within the hairdressing industry. Attempting to shake this negative stigma, she created Barberette as a price conscious business, that had a queer attitude and welcomed absolutely everyone, regardless of gender.

Barberette’s London shop first opened its doors to customers around eight years ago. In that time it has amassed over 600 five star ratings for its gender neutral service, and rave reviews from the BBC, Vice and The New York Times. The shop is proving a particular hit for those who may have otherwise felt uncomfortable or unwelcome in a traditional barbershop setting.

“As a salon we have challenged loads of hairdressing federations, and ‘City and Guilds‘, who are the providers of hairdressing books for colleges,” Klára explains. “We have encouraged them to slightly change the gendered wording in the way they that they label some haircuts as being strictly ‘for men’ or ‘for women,” she continues. 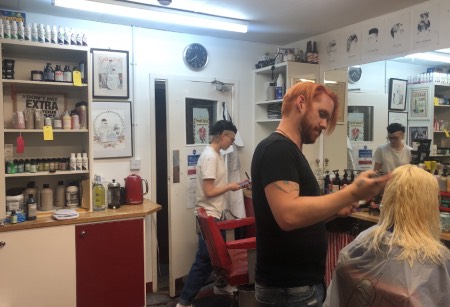 Marking a stepping stone in the movement for creating safer spaces for those looking to stray away from the guidelines of conventional gendered haircuts, Barberette has found itself especially popular amongst those in the LGBTQ+ community. “We also have some clients who have downs syndrome or are autistic, we just want to give them a space that feels comfortable,” Klára reflects.

“Some clients just want to have a chat on the bench and they don’t even make it to the salon chair and that’s absolutely fine. We always make sure that they have an opportunity to tell us if they’re a little bit uncomfortable.”

The wide range of clients also extends to a variety of different cultures. The discreet location of the salon has given muslim clients the opportunity to arrange an appointment, sometimes seeing the to removal of their hijab in a safe environment. This often includes the prospect of darkening the store windows, closing doors and ensuring a female staff member is cutting the hair.

Seen as a judgment-free zone, short haired women, some having faced previous rejection from regular barbershops, heterosexual men, those in the fetish scene and sex workers also make up a large majority of the client base, both in London and Prague.

Despite the success of the Barberette in London, Klára recalls how after living in England for 15 years, she did have some apprehension about opening a second barber shop nearly 800 miles (1,033 km) away in her home city of Prague.

“I knew it would work,” she recalls: “but I was a little worried in case I didn’t understand the Czech mentality anymore. It has actually picked up very well and we’re just as busy as we are in London, we are actually the only gender neutral barber shop in Prague.”

The store in Hackney is now managed by Lauren Thwaites who has worked for Barberette for over a year, but a subtle hint of Czech influence still remains. A framed illustration on the barbershop wall with the words ‘Nástroje pro kadeřniky‘, translating to ‘tools for hairdressers’ sits pride of place upon display. 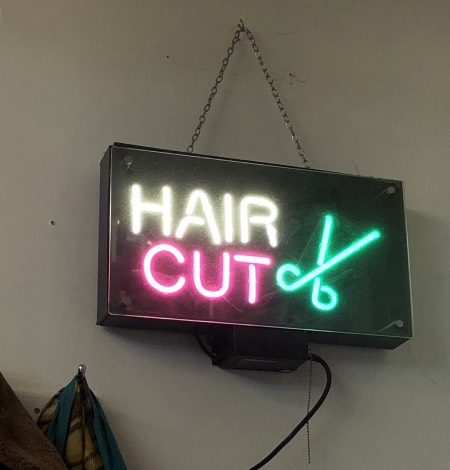 After working in the hairdressing industry for many years, Lauren makes reference to the price inequalities with first hand experience. “In my old job my women’s cuts would cost over £60 and my mens would cost £40,” she recalls.

“My boss turned round and said it was because men come back more regularly, every four weeks rather than six-to-eight weeks like most women with long hair, so if you add it up at the end of the year it costs about the same.” This becomes especially unfair however, when a man with long hair would come in and still get charged the same cheaper price of a gent’s cut.

Reflecting on Barberette’s community-based feel, Lauren sees teaching style as one of the main reasons why barber shops are seen as spaces predominantly for men. “I suppose you get taught that barbering is a totally different thing to hairdressing,” she says, referencing her own training experience which saw classes taught on how to cut short women’s hair and men’s hair as two distinctly separate tasks.

“I think maybe a lot of barbers turn women away because they might be scared of cutting their hair,” she suggests. “Maybe they don’t think they have been taught the right skills for it.”

Never turning a customer away based on assumption about appearance, Lauren ensures that Barberette is an acceptant safe zone for all. “I try not to address clients with binary language unless I know their specific pronouns or how they choose to present themselves,” she says.

Elsewhere in the United Kingdom, other clients aren’t lucky enough to receive this kind of welcome. As reported by the Metro newspaper, this month 29-year-old Cloe Freeman, a short haired woman, was denied service at a regular barber shop because of her gender.

The reasoning behind this was offered up by one of the barbers who chose to remain anonymous.”When men come in and see a woman sitting here they are put off coming in, they don’t like being here when a woman is here,” they state.

With this kind of barber shop discrimination placing an emphasis entirely on the importance of gender, Barberette’s gender free approach proves to be essentially important step forward in society today. 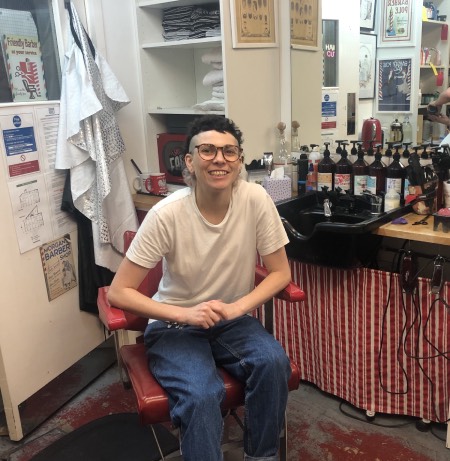 “Generally speaking I think that with the way hairdressing is going now, things are getting a lot more non-binary than they were,” Lauren says.

“People are becoming aware of their language and a things are gradually becoming more open. There are quite a few gender neutral barbershops out there now, and I think a lot of places are starting to get more likely to accept women.”

As one of the first gender-neutral salons to exist in both London and Prague, Barberette has paved the way for other hairdressers and barber shops around Europe.

Although the concept of a gender-neutral salon has the possibility to be replicated, the positive atmosphere and genuine passion expressed by those who work in Barberette arguably cannot.

“It’s the most beautiful feeling when you do something that makes somebody happy,” Klára says. “When you see clients looking at themselves in the mirror and you see how much they like what they see looking back at them, that’s the most important thing.”