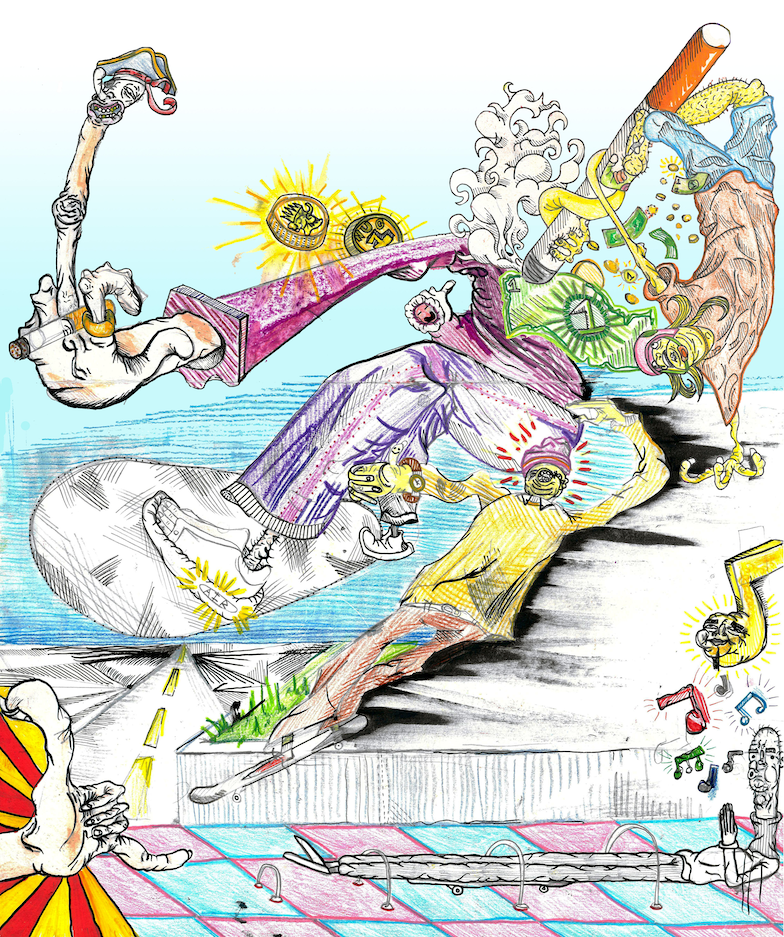 Tucked away in the tame and ordinary suburban town of Lake Forrest, Southern Calfornia, is a school that was once home to one of skateboarding’s gnarliest street spots: the El Toro stair set.

Directly translated in Spanish as ‘the bull’, the 20 step set has brutally swallowed up skateboarder after skateboarder attempting to get a trick down it.

To date, only a select few talented and audacious skateboarders have marked their territory with only a piece of wood and four wheels on the colossal drop.

Many have skated the rail running down the middle, but that was removed in 2010. However, the skateboarders who have tricked down the set without touching the rail are considered to be more extreme.

Unfortunately, the spot was demolished in the summer of 2019. It was the end of an era, no more Thrasher covers, scars, slams or makes on the set.

The first to ever skate the spot was Heath Kirchart. He landed a frontside lipslide down the rail in 1998, which featured on the February ‘99 cover of Transworld magazine, for his part in the Birdhouse video The End.

From that cover, El Toro was born, a new landmark for skateboarding was discovered and the gates of pain, misery and triumph opened up.

Then, Don “The Nuge” Nguyen was the first to attempt the drop without grinding the handrail. An aggressive Ollie down the set in 2001, yet executed with prowess.

The beautiful cacophony of his wheels gliding across the asphalt, to the ricochet of the firm pop off the skateboard as he elevates himself over the stairs. A sudden pause with a subtle ambience of the shutter clicking away on Michael Burnett’s camera.

This was one for the history books. On that hallowed day, Nuge became the first skater to ever land a trick down the monumental spot. Almost nine years later and only a select few have followed in his footsteps.

The punishing set has caused many an injury to skateboarders over the years. Most recently David Gonzalez, a man capable of the taking the hardest of slams, quite frankly ate a stinking pile of shit when he tried to kickflip back 50-50 the right-hand side rail while filming for his most current video part Spirit in Black.

Once the spot was destroyed, Nyjah Houston released footage of his attempts of a backside flip. The first of his nine tries started off strong and he looked like the next induction to the El Toro hall of fame. A heel bruise got the worse of him and eventually, in his final try, he broke his ankle and knee and was lucky to even be able to walk out of the school gates.

El Toro was once the most prolific skate spots and has infamously been the centre of much controversy. The Plan B pro rider Ryan Sheckler claimed in an interview with the late Trasher editor Jake Phelps that he had landed a backside flip down the set.

For months the skateboarding community were expecting to see the footage in an upcoming video part and the longer he took to release the footage speculation arose that he may have lied about the trick. Soon the truth came out and Sheckler had committed a skateboarding cardinal sin, to lie about landing a trick.

“For me, El Toro is somewhat the most legendary spots for most skateboarders.”

In an interview with Xgames, skaters in cars, Sheckler admitted he had lied and apologised for his gloat in an interview with Thrasher. Although his apology never sounded sincere, continuing to focus on explaining the struggle he went through with fame and alcohol addiction.

London-based skateboarder Jason Goode said: “For me, El Toro is the most legendary spot for most skateboarders”. To generalise, a majority of skateboarders have either heard of, seen or skated this spot and that is why it is such an important landmark in the history of skateboarding.

Jason added “El Toro is one of the pinnacles of street skating because you have to be in a totally different league to even try and skate that thing, let alone actually get a trick”. Another London skateboarder, Joe Mills, said “an iconic part of skateboarding history and the things people are trying to do now blow my mind and pushes skateboarding to new limits.”

It is safe to say skaters like to talk about El Toro. It was mentioned in Gary Rogers web series Skateline six times between 2017 and 2018 discussing all the latest news surrounding it.

The Nine Club, a podcast hosted by Chris Roberts and co-hosts Roger Bagley and Kelly Hart even sparked a debate if they would rather skate Bob Burnquist backyard mega-ramp switch or try to skate El Toro. Not to mention the time they all got gassed when Chris Joslin showed them the trick he got down it for which we are still waiting for the footage.

El Toro has always been the ‘poster girl’ of skate spots over the years, being plastered all over skateboarding magazines. From the Big Brother to Thrasher and Transworld and even making a few appearances in the UK skate magazine Sidewalk.

Jenkem skate magazine even called it the third biggest skate spot in an article in an attempt to figure out the size of the gnarliest spots. 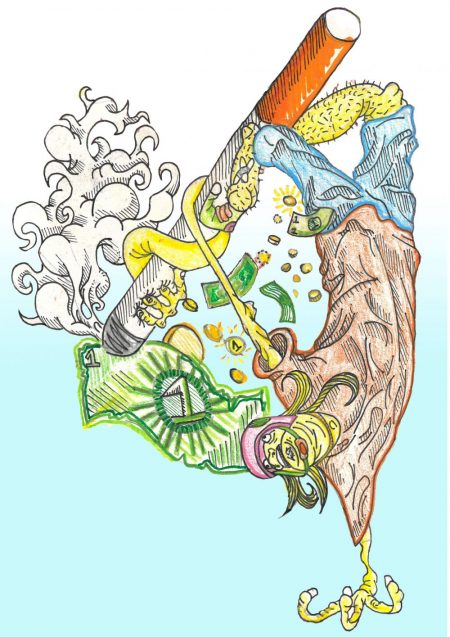 Starting with the Transworld February 1998 cover of Heath Kirchart frontside lipslide to the most recent cover of Adrien Bulard’s smooth and effortless backside tailslide in the July 2018 cover. The 2017 skater of the year Jamie Foy earned the cover of January 2018 Trasher cover; some would say the Oscar of skateboarding. This was justly deserved after his first try front crook. Shane Cross has awarded the February 2005 Transworld cover two years before his death making it one of the most memorable covers in skate history.

This can not be a tribute to El Toro without honourably mentioning those daring enough to land tricks down the set and not earn credit as high as a front cover of a magazine. The few who have skated El Toro have shocked the community of skaters by pushing the limits of the capabilities of what someone can perform on a plank of wood and some simple architecture regardless of what they gained from it. In 2006, Dave Bachinsky did exactly that when he kickflipped El Toro, making him the first to flip his board on the set.

Let’s not forget Ryan Decenzo’s Nollie in 2009 and Aaron ‘Jaws’ Hamoki’s tuck knee ollie in 2011 then taking it up a notch with a kickflip melon grab in 2014, to the creative Madar Apse 2012 firecracker and Richie Jackson’s foot slide in 2016.

El Toro is one of the most important landmarks in skateboarding culture and, sure, there are more equally as important spots, the Lyon 25 set and Wallenberg to name but two. But for El Toro, there are no rules on how you could skate it, especially when the trick selection is limited due to the sheer size and the pain skaters go through.

This can be from the gnarliest shredding at what looks like 100mph hucking themselves down the set in any which way or direction, flipping or spinning their boards in any way they feel, or the most technical aiming and dipping their boards grinding down the rail, or it can even be the simplest idea of sliding down on your feet. Anything that was done at El Toro was a benchmark in skateboarding.

“An iconic part of skateboarding history and the things people are trying to do now blow my mind and pushes skateboarding to new limits.”

Skateboarders seem to obsess over El Toro, almost turning the spot into skating mythology. It’s because of the unimaginable feeling of what it really is like to actually land a trick down it, that only a few have the pleasure in experiencing.

If it hasn’t been spoken about in an interview, in a skate magazine or discussed on a skateboarding podcast, kids are talking about it at a skatepark, or it has been hung on walls from poster pull-outs and watched in the best video parts.

Since it’s removal in 2019, the progression on this spot has come to a halt. To think about how far skateboarding has come since the first discovery of El Toro, and what tricks have been done it’s scary to even imagine what people would have been capable to do on it in 10 years time. And for that reason alone, the destruction of the spot is a huge blow for skateboarding.

Throughout the skateboarding timeline, El Toro has played a significant role in the progression of what street skateboarding really stands for, getting creative and pushing boundaries. It can combine all styles of skateboarding but they all come under an umbrella of crazy.

The beauty of it is, yes the skaters wanted to trick down the set for themselves but they also do it for the skateboarders, who want to see the most jaw-dropping and dangerous trick. It is hard for most people to understand why a monolithic stair set enclosed in a school can be special to a group of skateboarders but El Toro is the epitome of gnarl.