“We live complex lives, and inequality is traversed through a variety of issues,” says Carolina Caycedo. As a multimedia artist based in Los Angeles, Caycedo’s work engages with the history of natural environments and ecological justice. “My work has always been reacting to and commenting critically upon issues that affect me as a woman, then as a woman of colour migrating to the West, as a mother, and a cultural worker.” Her artworks have been showcased in museums and galleries around the world, including Whitney Museum of American Art and Los Angeles County Museum of Art; and at international biennales such as the São Paulo Art Biennial 2016, the Hammer Museum “Made in L.A.” 2018 and the Chicago Architecture Biennial 2019.

Her work encompasses diptychs, sculptures, choreographed performances, films and installations. One of her most famous ‘Geochoreographies’ performances was Aguas Para A Vida (2016), organised one year after impunity for the socio-environmental crimes committed by Samarco, a Brazilian mining firm. The people of the affected communities of Rio Doce in Brazil participated in this, laying down upon the ground to form the words ‘Aguas Para A Vida’, which translates to ‘waters for life’. Another notable artwork was the Dammed Landscape (2013) in which diptych photographs were encapsulated in aluminium and matte plexiglass, and then mounted on concrete blocks. Then at the 32nd São Paulo Art Biennial, Cosmotarrayas was unveiled: a series of hanging sculptures assembled with handmade fishing nets and other objects collected by Caycedo during her field research in different riverine communities affected by the privatisation of waters in Colombia and Brazil. Her artistic practice has evolved through mediums of expression. She says, “An issue or an idea is unfolded in different directions through a variety of pieces, and through different mediums. In my work, you will find ideas and exercises about unlearning landscapes, conforming collective bodies and hacking the view from above (the view from power), the colonial gaze.” Sometimes these issues, or a single issue, is tackled through an artist book, through a performance or a video. While in other instances, the works in different mediums share titles, other works are referenced, and even rebirthed through performatic activation. She says, “My work has the quality of being open-ended: able to transform and adapt itself to different contexts and exhibition spaces. They’re not static, the same way that the issues they’re tackling are not static.” 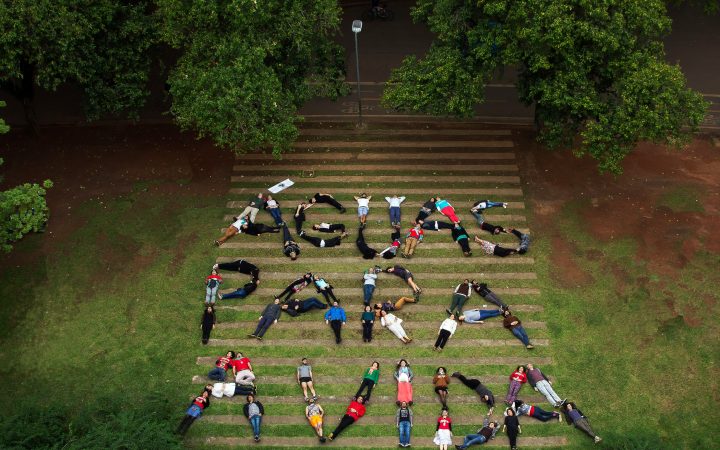 Caycedo believes that environmental justice is a transversal umbrella encompassing issues of feminism and racial prejudice, and cultural, economical and pedagogical inequalities. “Initially, I dealt with issues like immigration, labour, precarity, solidarity economies and non-monetary bartering. But once, when I was called back to Colombia, where I grew up, living close to the bank of the Magdalena River, my work started to take an environmental justice overtone.” By learning from communities that are at the frontline, Caycedo’s goal as an image maker is to highlight true environmental struggles. “All issues are intertwined, and they cannot be tackled singularly. When we fight for our rights, we fight for economy, education, culture, society, spirituality, and our environmental rights, at the same time.”

“In places like Colombia, where armed conflict has been intragenerational, the victims have not only used historical memory as a tool to hold perpetrators of violence accountable, but also to share what happened from the point of view of survivors, challenging hegemonic perspectives,” says Caycedo. The construction of environmental historical memory serves as a key variable in ensuring non-repetition of violences against human and non-human entities. This also helps in defining strategies for the future. She says, “Nature has not only been a setting for violence, but also a victim and survivor of violence. Like any other victim, different ecosystems need reparations and we need to hold the perpetrators of violence against nature accountable. For the construction of environmental historical memory, artists can contribute by documenting changing ecosystems and collecting testimonies from communities that have witnessed the change or the devastation of natural systems. This allows us to see and perceive violence that is not immediately apparent; like intergenerational and slow violence, which spreads over years or decades, such as tracking the pollution of air and water, contamination of the land and eventually, the food that we eat.” 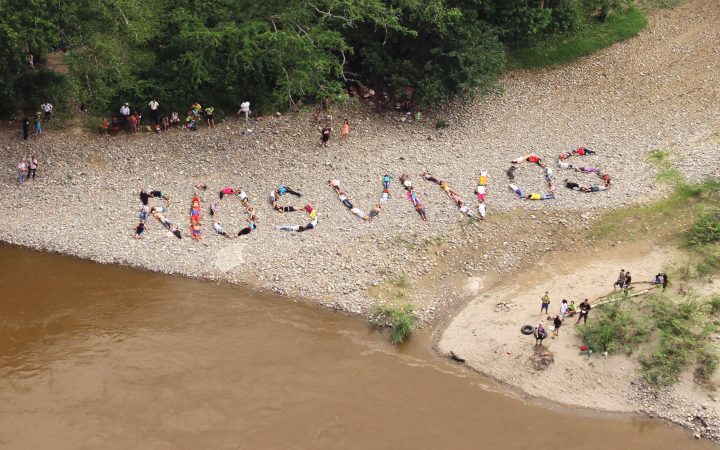 “In one of my works, the performance called Atarraya, which means ‘cast net’, the score comes out of a gathering we had of land and water defenders on the banks of the Magdalena River in Colombia,” she says. By incorporating a round of introductions into the score of the performance, Caycedo created a trigger point. “Then, the narrator spoke about the importance of cast nets and the kind of theoretical relationships between social containment and the containment of waters.” Now, the communities have reappropriated the score to present their stories and testimonies at the Truth and Reconciliation Commision in Colombia, demanding an investigation of how armed and environmental conflict overlap—specifically concerning dam building in Colombia. “As artists, we can contribute different tools for the communities, giving back resources by creating visuals and collecting testimonies that can become evidence for future cases. Eventually, creating environmental historical memory is the first step to guaranteeing the non-repetition of violence,” Caycedo says.

For the Getty Foundation’s Pacific Standard Time 2024, Caycedo has been granted a sum of USD 110,000 for exhibition research support. The Collapsing of a Model will include all the works that conform to her project Be Dammed, which has been criticising extraction and the consequences of extractivism in different ecosystems, looking at how things get depleted and its consequences for different communities. The Collapsing of a Model will continue this investigation, but from the perspective of abundance. Caycedo says, “The current research is attempting to broaden an understanding of what a fair energy transition looks like across the Americas. I don’t want to focus only on new ways of generating energy, but to think amply about energy transition. Through this, I am trying to connect different practices and processes that are happening simultaneously across the continent.” This includes (but is not limited to): decommissioning of dams in the Pacific Northwest, for example at the Klamath River between Northern California and Oregon; the impulse of electric sovereignty in places like Puerto Rico in the Caribbean, which is on the frontline of de-coloniality as well as climate change; women-led initiatives that are pushing for community-driven small-grid energy production; and looking at the kind of democratic processes that are happening in Chile, with the writing of a new constitution and water laws that democratise access to water. “Also, I am looking at a particular example in the south of Chile, under the name Ensayos, where the conservation of peat bogs (a critical ecosystem that is both a water reserve and a carbon sink) goes hand-in-hand with the recovery of the Selk’nam indigenous identity, and with socially-engaged localised art processes,” she says. 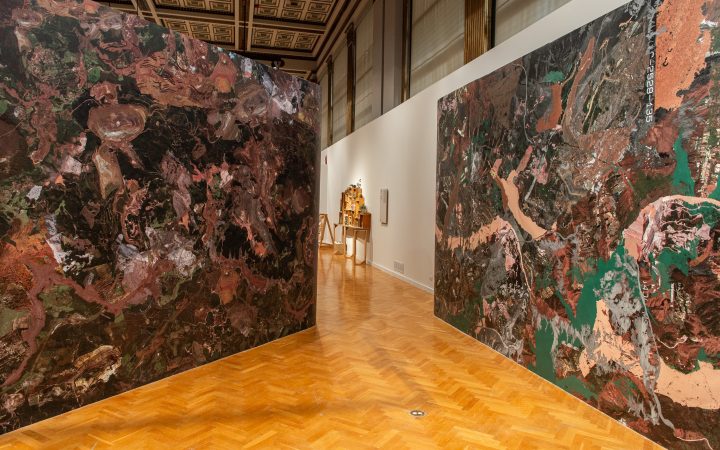 The Collapsing of a Model: Photography diptych at the Chicago Architecture Biennial (2019)

At the moment, Caycedo is still in the process of completing the base research for the project, after which she will continue her fieldwork across the Pacific Northwest and Puerto Rico. On visiting Chile in January, she says, “Being able to speak to the people who are involved in the writing of the constitution, the activists who have passed resistance to participate in the electoral process and claimed seats, or with scientists who are doing the conservation around peat bogs, has pushed me to think that perhaps what I want to present in The Collapsing of a Model for PST is not so much a new body of work or formal pieces of art, but an open space for thinking and having conversations together: sharing experiences that are happening in other parts of the Americas.” The interactions she’s having with intellectuals through her fieldwork has drawn her towards a more knowledge-based framework for the exhibition. Meeting these people and hearing their testimonies has urged Caycedo to think that other people need to experience it firsthand. “The best way is to actually put these people in contact, so they can hear about various processes and practices; and most importantly, to connect these practices.”

“For me, it would be a dream, if during PST 2024 I can connect the Selk’nam community from Tierra del Fuego in Chile with Carrizo/Comecrudo from Texas—both unrecognised tribes by the authorities of different places, but both spearheading processes of environmental justice in their territories. Or to connect those who are pushing the decommissioning of dams in the Pacific Northwest with people from Colombia who are resisting the construction of dams right now,” she says. The Collapsing of a Model will have key pieces of Be Dammed such as the Water Portraits; the first murals Caycedo created with satellite imagery called Yuma, or the Land of Friends; The Serpent River Book, an artist book that unfolds; and new works stemmed out of her on-going research. The exhibition at PST 2024 for The Collapsing of a Model will be organised at the Vincent Price Art Museum, inside the East Los Angeles Community College. She says that this exhibition will have a strong public programme component, so that the research can be accessed by the Los Angeles community. Caycedo wants the research information to be accessible to students and visitors alike, so a number of invigorating dialogues can be expected. 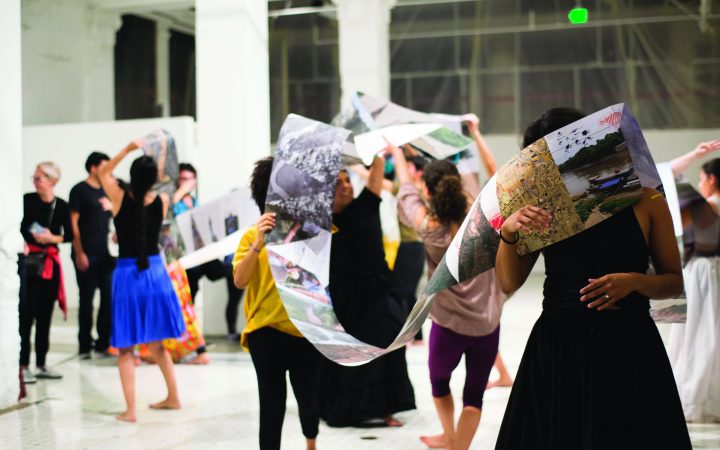 Underneath the priest’s cassock

By Irene Chirita
7 Mins read
Looking at the long story behind the former priest Rev Fernando Karadima’s sexual abuse accusations, and its impact on the Catholic Church