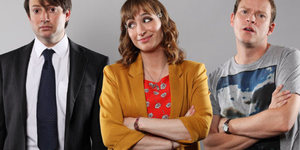 Following the eagerly anticipated premiere of its ninth and final season, I felt it only right to pen my own unnecessarily long-winded, cliché-ridden paean to the longest running British sitcom of all time.

The buildup to the series premiere has filled me with a patriotic fervour in that I have witnessed the growth of such a clinically accurate and brilliantly witty love letter to the people of Britain, as well as a show that has fearlessly broken down social and cultural barriers.

Peep Show is the story of two flat mates, the neurotic social misfit Mark, and the loveable but conceited lay about Jeremy. The show utilises a Point of View (POV) format, creating an emphasis on character interaction and reaction.

The dialogue is also broken up by our two protagonists inner monologues. The famous British emotional reticence means that this ingenious idea adds an extra dimension to a show.

Through these thoughts we see that both characters possess an unreasonably high level of self-awareness, leading to severe anxiety.

This manifests itself most frequently in their relationships with women. In short, they are positively beholden to them, with inner doubt and self-loathing clouding every interaction with the fear of rejection.

Both characters put their women on a pedestal, despite their differences. Whilst the idea of male protagonists ruminating over some unattainable sex robot is a trope as old as time, the idea of masculine hegemony has never been so honestly or cruelly eviscerated on TV as it has here.

Previously, female protagonists have had a tendency to fall into either the Sybil Fawlty school of being undeniably strong, yet tyrannical and irrational, or the Dawn from The Office school of being admirably stoic, yet infuriatingly meek.

It’s difficult to point to many previous examples of women who are genuinely well rounded and not hopelessly ditzy. The women of Peep Show are confident and strong headed yet prone to selfishness and irrationality. Human, in other words.

Marks most recent love interest Dobby in particular is a fantastic example of a woman who can be feminine and quirky yet assertive when needs be.

Whilst an unashamed geek, she is confident in her own sexuality. She won’t be taken for a fool, and is capable of being the alpha in the relationship when needs must, which she does frequently with Mark.

Peep Show is the first time we confront the uncomfortable reality of the submissive male in such a brutally honest, unforgiving way.
Mark and Jeremy have consistently delivered a particularly British brand of schadenfreude for the past 12 years, masterfully grappling with the banality of being both a working stiff and a delusional bohemian.

It is an ode to both conformity and eccentricity, with the suppressed jealousy that Mark and Jeremy feel towards their idealized alter ego characters Superhans and Johnson.

Despite initially being charismatic, idealized versions of themselves, we see that living at a relative extreme of society is ultimately unglamorous. We consistently see the inevitable futility of attempting to be something your not.

A refreshing sight and grounded concept in a twenty first century where a utopian concept of masculinity is made to make us contemplate inadequacy every day.

Despite Mark and Jeremy’s comparative quirks, they are pretty middle of the road guys, albeit unenviable ones.

I feel a selfish ambivalence that the ride has come to an end. However, it’s only right that the recent slight decline in quality not be allowed to manifest into an undeniable blemish on an otherwise near flawless run.

To be honest, as the crow’s feet form and the hairlines recede, the shows concept loses a certain joie de vivre.

That the show’s quality has barely dipped below a certain standard over eight seasons is testament to not just the consistently sharp scripts, eminent watchability and flawless performances, but also the challenging of the sitcom status quo.