Three years on from visiting his first pub on the list, Sam’s reminiscing about his journey so far.

Sam Cullen. You could find him working away in Parliament during the day, providing policy advice and working closely with the Labour party.

But as soon as he leaves the day job he unwinds by going out exploring the many hundreds of pubs in London.

Sam has always planned to create a blog but it all kicked off when he watched a documentary on TV celebrating the Tube’s 150th birthday.

He was inspired to visit a pub close to each of London’s 270 underground stations, which he reviews on his blog INNside Track almost every day. 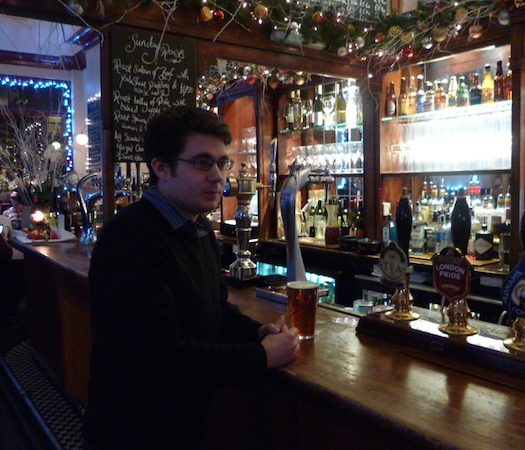 Sam having a pint in the Atlas in West Brompton, one of the many pubs he’s visited

‘I’d wanted to do a blog for a little while when I struck upon the idea of doing pub reviews. I just wanted to go out and explore London and help people find good pubs and avoid the tourist traps it’s so easy to stumble into in Central London.”

This venture encouraged Cullen to visit places he’d never given a second thought to before.

“My trips to the end of the Metropolitan Line stand out because it’s so leafy out there in places like Chorleywood, it feels so different to Central London where I spend the majority of my time!”

He has accumulated around 900 people who are following his pub-crawl through social media.

When asked about his favourite pub so far, like a proud father, he couldn’t choose any one pub that stood out above the rest.

He said he endeavoured to visit the 270 pubs in the order that the underground stations near them opened, but with just 10 more pubs to go, he realised that aspect of his plan perhaps wasn’t the way to go.

“Visiting pubs in the order the stations opened made it take a lot longer, as in the early period the network often expanded in a rather haphazard way and meant on one trip I went from Hounslow to Northwood in the same afternoon.”

“If you did it in a line-by-line order I think it would be much faster,” he says thinking back on his journey.

His undertaking made for a whole lot of beer to be consumed, which is why he wants to turn this boozy mission into a book.

With the final pint not too far away, Sam has set his eyes on drinking his way around the London Overground as a possible sequel.

Until then, you can board the tube with Sam and let him take you to London’s hidden pub-gems by following his journey through Twitter or his blog.