Artefact: reflecting a time of change

As with most things in life, looking back and reviewing the progress that has been made since Artefact began nearly six months ago is a good thing.

Scrutinising the project is inherently valuable, because it causes us to reflect on what we’ve done and the direction we’ve moved in. Are we really doing something of worth? Have we achieved anything? Or have we made a huge misstep in transitioning away from the newspaper format that the University of the Arts London (UAL) has known for more than two decades?

Some argue that Arts London News, the predecessor of Artefact, provided essential scrutiny of the university, making it accountable, and that the new direction of Artefact was instigated by UAL’s management in an effort to put a stop to said scrutiny. It’s a serious allegation.

But as with all debates, this one is only constructive if we ignore preconceptions and pay attention to the facts. Incidentally, this is what a journalism education drills into you. Be objective. Do your research.

If we look at it objectively, it’s clear to see that ALN was very much a student paper. Much of its content was news about the university, the students and the alumni. This was its strength. The team reported extensively and competently on a range of campus events and student achievements, and publicised the successes of our fantastic alumni.

In the eight print editions produced in the academic year 2013/14, it also ran four articles that were critical of the university. Three related to privately–owned and managed halls of residence affiliated to – but not controlled by – the university, and one urged UAL’s Vice-Chancellor to turn down a pay rise.

The paper ran a significant amount of generic student news too – student issues and happenings without a UAL specific element – the kind of news that is widely reported in the student sections of the websites of the national newspapers.

However, UAL doesn’t actually have much of a campus culture. Our 19,000 students live all over the city and lead very diverse lives during the time that they’re not in college – ie the vast majority of the time. A lot of us don’t buy into the standard ‘UNILAD’ style student experience so prevalent at other institutions. So a publication that defined its readers first and foremost as Students, capital S, was incongruous with reality.

The vice-president of the Students’ Union at the London College of Communication, Bee Tajudeen, says: “Artefact has a responsibility to UAL students to make sure campaigns run by the students union are reported. Not [only] does it give students a better understanding of the union but also helps students to hold their representatives to account.” Others argue that we have a responsibility to scrutinise the university and its practices. 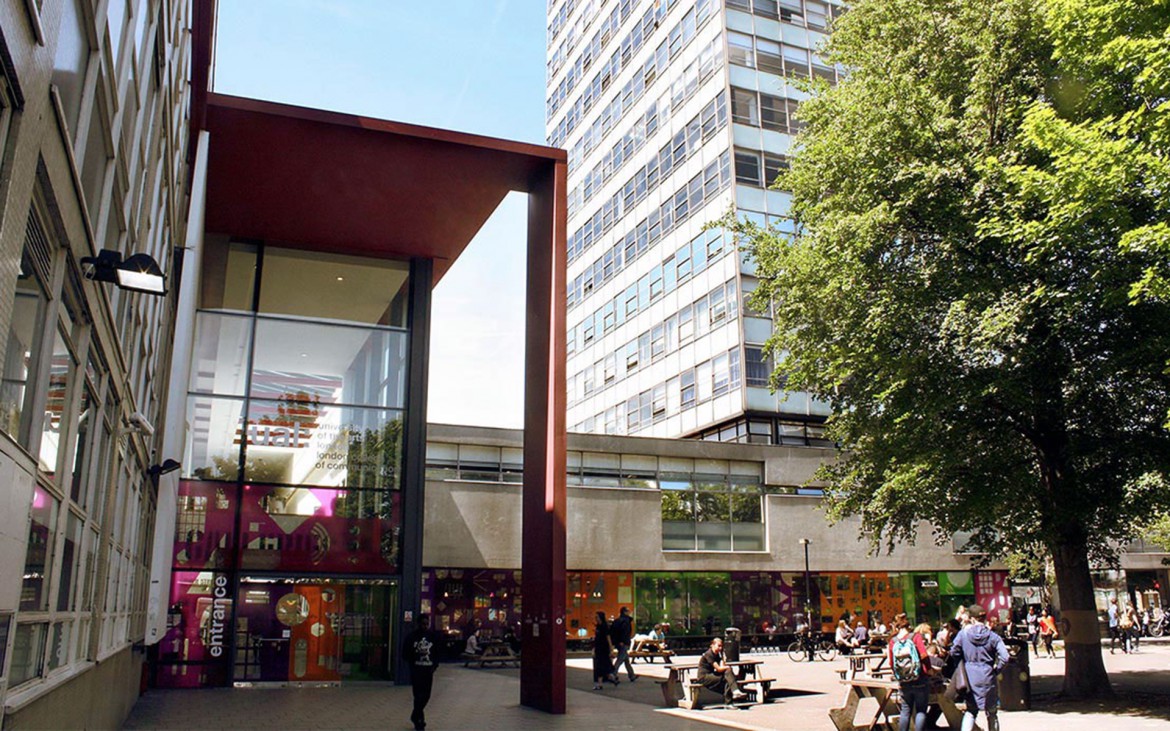 London College of Communication, the home to both publications

But when we journalism students applied to the course, we didn’t sign up to perform some kind of executive watchdog role on behalf of the many thousands of other students at this university.

Of course, UAL should be accountable to its students, staff, and the taxpayer. But no other course is expected to carry out an altruistic function for the student body as a compulsory  part of their degree, so to say that we have a fundamental duty to do so just isn’t reasonable or fair. We don’t expect the LCF knitwear designers to make everyone jumpers.

That being said, the magazine has absolutely no editorial policy against featuring investigations into university practices or genuine student grievances – both managing editors have actively suggested it in team meetings. All well researched articles are welcomed and encouraged by tutors and editors alike.

Every other student at UAL gets to choose a final major project (FMP) that engages them and benefits their portfolio, and that’s exactly what we’ve done this year. We were given the opportunity to revamp our FMP in whatever form we wanted, so we developed the concept of Artefact through a series of voluntary planning meetings, which everyone on the course was repeatedly invited to.

As far as was evident at the relaunch meetings, we made a collective decision to move forward from a student–driven focus because we, as a group of people, don’t define our identity by the fact that we currently happen to be studying. We’re humans, and we wanted to talk about human issues. We think our readers want to read about them too.

If we had wanted to continue being a university newspaper, we would have. However, most of us – by virtue of the fact that we chose to study journalism – are more interested in the world around us than the bubble we exist inside, so we decided to pursue a more outward looking agenda than one of internal university issues and UAL politics. We’ve paid nearly £30,000 to get here, so it’s only fair that we have the freedom to write about what we want to write about.

The fact that certain voices in the argument seem to think we were somehow subjugated by management without realising it patronises everyone who participated in the process and was involved in the discussion around the change in direction.

The suggestion that the university was willing to effectively pay to get rid of ALN (which was printed for free by Murdoch’s News International) because it was too probing – is also an unproven conspiracy theory.

UAL has spent around £20,000 printing Artefact this year. This equates to about 0.01 per cent of the total income from tuition fees reported in the university’s financial accounts for the year ended July 31 2014, and it demonstrates nothing more than the fact that the university is willing to invest relatively small sums to support the education of their journalism students.

Aside from student and university–related stories, the bulk of ALN’s print content over the last academic year was entertainment and lifestyle journalism. Much of it reflected an outlook that those of us who participated in the planning meetings disliked. We felt a lot of the content in this genre was inappropriate for the audience, as well as being somewhat mindless.

For example, the first issue of the year featured a full page interview with musician Joel Baker (nope, never heard of him either) which made the shocking revelation of “why Fearne Cotton would be his perfect celebrity wife”.

In February 2014 there was a whole spread dedicated to Valentine’s Day, which provided inane guidance on speed dating, online dating agencies and Tinder – “For those of us left alone, ALN finds the best ways to find love (or get laid).”

The paper also had a regular section called ‘Arts List’, which – instead of having anything to do with art – was dedicated to advising its readers what to buy. Over the course of one term it recommended a £60 ring (apparently worth the price tag because it’ll “ward off nasty spirits and look fabulous on your fingers”), a pair of £120 Nikes, and a £75 hat with “gold-glitter bunny ears.” Excuse me while I go and withdraw the last of my student loan for a pair of sweatshop trainers.

The above frivolities exemplify exactly what we wanted to move away from.

We, as a team, are engaged in the world around us. We care deeply about international relations, social issues, the environment and the future that awaits us. And as students in the UK, we’re an incredibly privileged demographic. So the attitude we wanted to reflect in Artefact magazine was the idea that there’s something significant happening outside of our immediate surroundings.

This year we’ve written at length about the dire economic situation faced by Greece’s youth, the future of artificial intelligence as a scientific discipline, London’s housing crisis, the E15 mums, the whaling traditions of the Faroe Islands, migrant workers in Dubai, cultural appropriation, stranded immigrants in Calais, the empowerment of Afghan women, and so much more. As well as that, we’ve never once told our readers to buy consumer products.

The magazine is not perfect by any means, but you can’t accuse it of being inward-looking, vacuous or materialist.

While the old format might have suited a small portion of people on the course, the editorial ethos of Artefact benefits us hugely as students by giving us the freedom to write about issues that genuinely interest and motivate us. We can now truly tailor our portfolios to fit our career intentions, rather than being pigeonholed into a local news format.

It also means our work can be seen by a wider range of people, as it’s aimed at young Londoners rather than just UAL students. We distribute the magazine all over the city and people actually pick it up and engage with it because they can relate to the issues within.

This in turn benefits the UAL students and recent graduates who contribute world class art to the project, while the visually driven, large format of the magazine provides a far better platform for showcasing UAL work than the paper ever could have.

Additionally, the fact that we can tell prospective interviewees and sources that we have a print readership in the tens of thousands means that they’re far more likely to see a benefit in speaking to us. We’ve secured interviews with internationally renowned photographer Rankin, legendary journalist Jon Snow, and the leader of one of the most talked about parties in British politics right now, Natalie Bennett, using this strategy. This benefits not just our portfolios, but it improves the reputation and profile of the magazine and makes it more interesting for readers – a virtuous circle.

We named the project Artefact because we primarily wanted to talk about art and facts, and we’ve done just that. Those who say we should have continued talking about ourselves and our university are entitled to their opinion.

But in the end, whichever publication you prefer, every issue of Artefact has flown out of the stands, while piles and piles of ALN copies from last year still loiter in our newsroom, offering themselves up as seats during morning meetings. So we must be doing something right.