“I’m a bigger woman, I kind of felt like, you know, yoga is for really bendy, fit people,” says Marie, 40, who became a qualified yoga teacher during lockdown.

“Alice (another yoga instructor) just makes you kind of know that whatever your body shape, it doesn’t matter. Yoga really did change how I do things and see things and cope with things as well.”

Marie has officially got her yoga teaching certificate early this month and has been teaching her own yoga classes since January via Zoom.

Although online classes can be a ‘struggle’ because her students are on mute and she’s unable to hear their reactions, it made her realise how much these classes have actually helped people cope during lockdown.

“I wanted to not just help myself but also help others with it. To help other people feels like no matter what age, what size, what anything injury they’ve had, they can definitely do better yoga and a bit of stretching,” she says.

Work has always been stressful for Marie and life as well as work can catch up with you. Marie is a mental health support worker, she supports parents whose children have mental health illnesses. She also does workshops in schools for parents.

Four years ago she decided to start the beginning of the year differently to ‘kick it off’, by attending a yoga retreat in Suffolk, for five days. 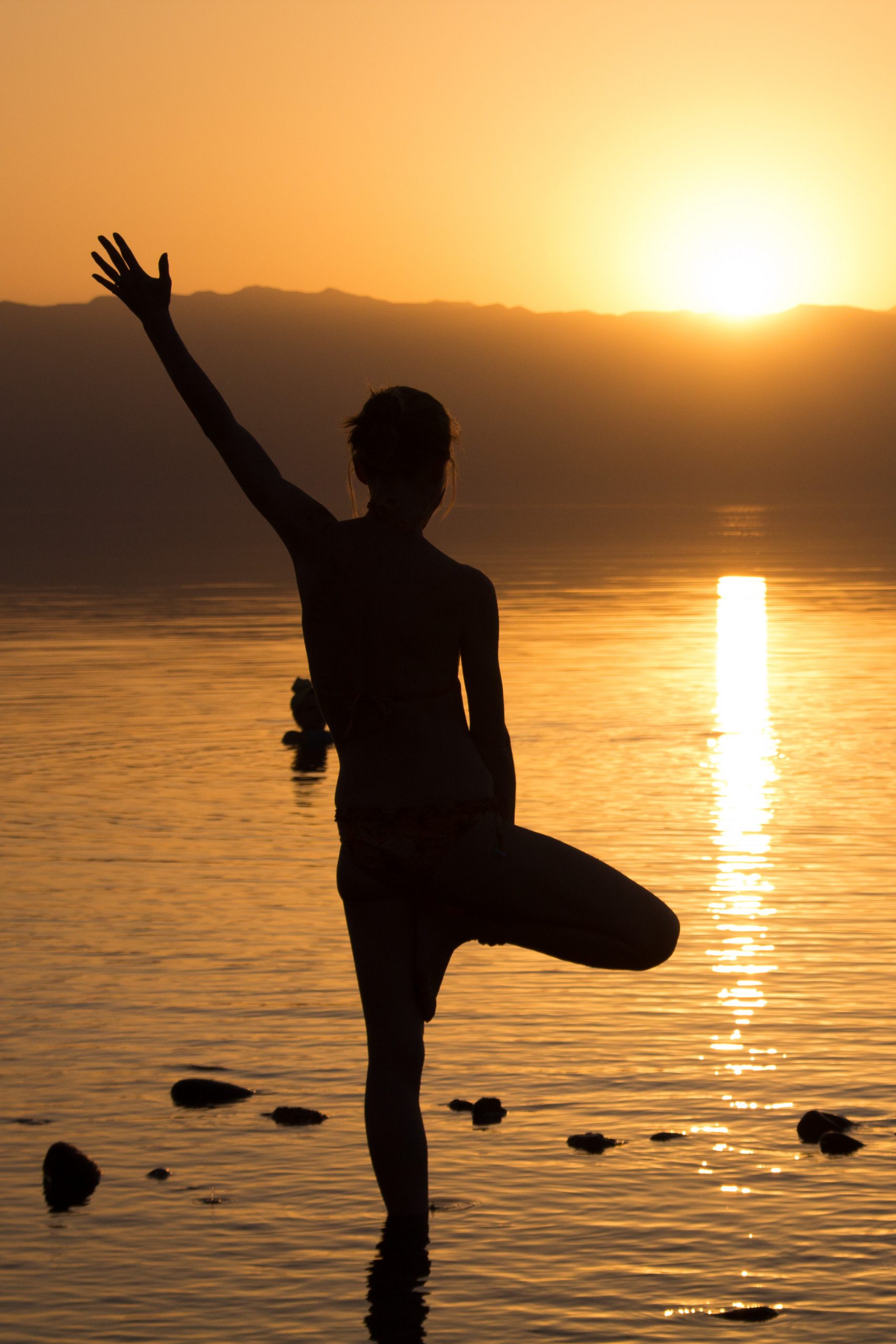 People often perform yoga in restful places, such as by a lake [Flickr: Ian Bothwell]

The retreat is near Brighton in a place which “looks and sounds like a Harry Potter town. It was completely what I needed. And I didn’t fall ill that year. And I was like, right. This is what I’m doing from now on to start my year,” says Marie.

Christmas can especially be a difficult time regarding mental health and spending the last Christmas in lockdown has been difficult for most.

“Christmas is always one of the worst. And I mean it’s the worst because everyone in your family you’ve got to be around are people who you avoid most of the year. And then you’ve got to be in a room with them for like, however long you’re staying there for,” says Marie.

It is nearly a year since the beginning of the first lockdown that was implemented in March 2020. Let’s face it, since then we have been in and out of quarantine to the point we have almost lost count. It is no secret that it has impacted not only our daily lives, routines, and jobs but severely ruined our mental health.

Mental health is now ‘the pandemic’, with suicide rates rising and mental health issues increasing by 200 percent. Yoga is an alternative to help people heal and help them cope mentally.

It is a known fact that exercising is beneficial when it comes to well being, however, yoga has a different element to it that other physical sports do not have.

Yoga focuses not only on movement but also on breath. “You’re focusing not only on the movement that you’re getting yourself into, but you also need to focus on the breath being part of that movement. So there’s a fair bit to concentrate on, not in a stressful way. But it definitely makes you stop the chatter [in your head] and enables you to come into your body and, and appreciate your body. I’ve seen some of my guys that I’m teaching see it as well,” Marie explains.

I, personally, found myself obsessed with the sport at the beginning of the first lockdown, where I would not miss a single day. I experienced the benefits first-hand, with my posture getting better, sleep pattern falling into place and finding some sort of routine to keep me mildly sane, while I was trapped between the walls in my small London flat.

However, I wasn’t the only one who slowly came to the realisation of the size of their home. “I probably quickly realised that actually our home is really small and it doesn’t fit five adults,” says Marie. Self care is an essential part of lockdown to keep healthy both physically and mentally.

There are many benefits to yoga such as: strength, balance and flexibility, the movements are performed in a slow motion and the deep breathing which leads to an increase in blood flow, warming up the muscles and holding the pose builds strength. 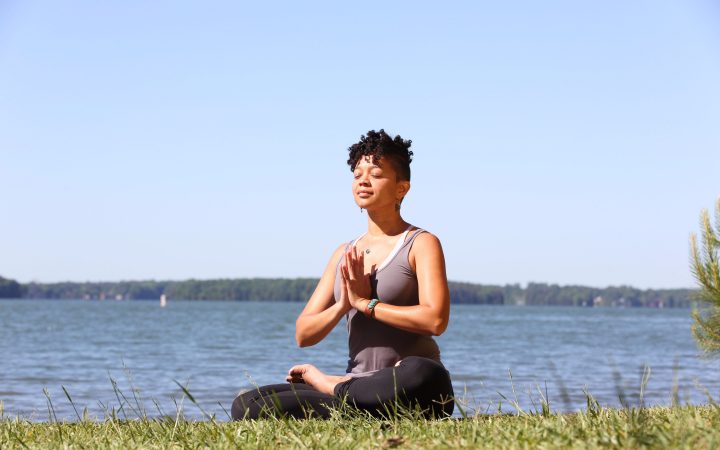 Meditation is an important part of yoga [Flickr: WeTravel]

It also helps with back pains as the basic stretching eases the pain, arthritis symptoms as the gentle movements allow the tender and swollen joints to ease, heart health, sleep and most important aspect during the pandemic its benefits on mental health. It’s safe to say the yoga essential promotes self care.

Yoga brings you out from the darkness of your head and into your body. As we reach the mids of winter, the weather becomes colder, the days shorter and darker.

Taking a walk in the park on a sunny bright day is less of an option, which leaves us prone to be stuck indoors in our heads.

“When you get your chatter in your head, I call mine negative Norman. And he’s like, going away, like you haven’t done this yet, haven’t done that. And oh my goodness, that puts my blocks up for being able to sit quietly and meditate,” Marie says.

As much as exercising can be refreshing, themore than usual aftermath  leads to tiredness. That is not the case with yoga, as it is meant to be relaxing. “Only ever stretch to the point that it feels like stretch, if it feels painful, don’t do it. Because that’s not what it’s supposed to be about. If you want to do personal training and get fit, go and get fit. But with yoga, you can look at it as more as a combination of mind, body and soul,” she adds.

When we hear that four letter word, we instantly think, ‘Instagram yoga’ as Marie puts it. A term to define a social media influencer with a high following and a slim, flexible, petite body who posts yoga videos on their account.

Not only does the body come in all shapes, forms and sizes but also age. If you’re thirty years and above, don’t be disheartened and think yoga is not for you.

When we think about the origins of yoga, it leads back to the yogi’s who would sit on a huge and meditate for eight hours a day. They would usually be skin and bone.

However, that is similar to ‘comparing every Christian to a nun’, there’s more depth to it. Marie says she enjoys working around barriers or any obstacles that are thrown her way.

Marie has arthritis in every joint in her body, she also has a lot of different physical stresses throughout her life from her jobs. However, when she looks back they’re actually mental stresses, and not taking time for herself. 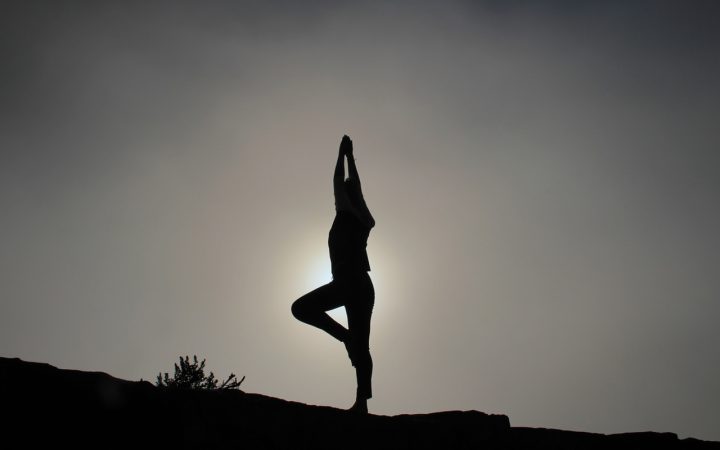 The tree pose is a popular exercise [Flickr: Syed Shameel]

There are people who are pushing through their anxiety without stopping to coping with them, which then brings on physical ailments. “So naturally, I think, if you can heal the mind, then the body will be healed as well,” she says.

Obstacles are merely just casually brushed off as Marie found the strength in her body she never thought she had.

“I really put my arthritis as a barrier to things that I couldn’t do. My weight is the barrier, my weaker upper body strength, I kept repeating, I can’t do that, because and actually just pushing through that barrier I am proud of myself knowing my own strengths, and really utilising my mind to understand that as well as my body,” she says.

Women as old as 60 who struggle to sit on the floor have joined Marie’s classes. Any form of exercising is important while we’re huddled up in our homes for the third time round as a nation. With the weather becoming freezing this can make it more difficult to go for walks in the park as well as for morning jogs.

For people who are in their 60s or anyone who simply may have an injury joins Marie’s chair yoga classes. It’s not just for people who are older or injured or may even have a disability, it could be as simple as finding it uncomfortable to sit on the floor and crossing their legs.

“I’m hoping to help loads of other people know that yoga isn’t a really scary thing that we all need to shy away from and feel like we can’t possibly do. And it will also be a personal journey that I’ll continue to do training in and continue to train lots of other people and maybe one day, train people to teach over as,” says Marie.