Not long ago, when someone mentioned meditation, thoughts of middle-aged hippies or Buddhist monks may have sprung to mind. Fast forward, and it is now an integral part of a daily routine for many people.

But what exactly is meditation? Maybe you view it as sitting cross-legged on the floor, lighting an incense stick, while keeping your eyes tightly shut for hours on end whilst chanting?

Meditation is calming your mind using techniques that lead to more focused attention and an increased state of awareness. As well as instilling a sense of calmness, meditation is used to develop positivity and concentration along with a feeling of mental clarity.

This ancient practice was originally used in Buddhism and other religions to reach spiritual enlightenment. But now, it is used mainly to promote a sense of wellbeing and calmness. You may be familiar with the phrase “just be” – that is indeed what meditation is; ‘just being’ or ‘being in the present moment.’

One of the main misconceptions of meditation is that you have to sit and actively not think about anything, clear your mind of all thoughts, and not let anything invade that space. In fact, meditation is more about allowing thoughts to enter your mind without getting too hung up on them. A good analogy is that the thought could be written on a cloud. You can see it is there, but it passes way overhead without bothering you.

There are seven different types of meditation. These include mindfulness, meditation which is just about being in the moment. Many people practice this form of meditation as it can be quick and done pretty much anywhere.

Many new apps allow you to be mindful for even a free minute a day. You can be mindful at any point – it may be brushing your teeth or even doing the washing up or on the daily commute.

Transcendental meditation involves a mantra – maybe a word or a sound that is repeated over and over. This practice lasts a little longer and can take 15 minutes daily.

Then there’s guided meditation: this is exactly as it sounds, and is typically led by a teacher or via an app and may include imagery and mental pictures that bring a sense of relaxation. 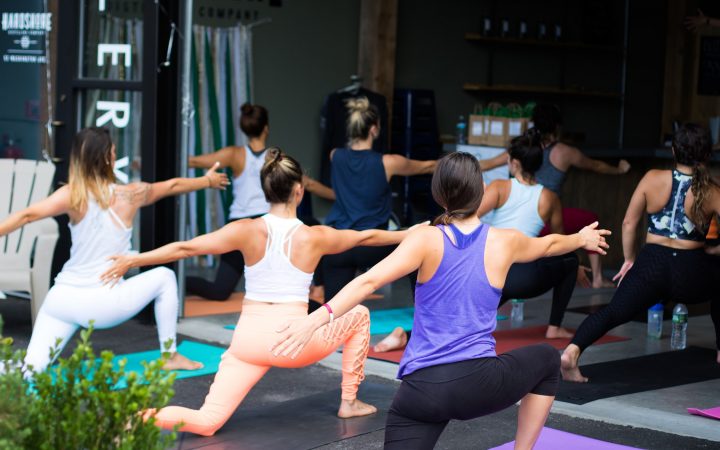 A group of people perform a yoga pose together. [Unsplash: Dylan Gillis]

Vipassana meditation is slightly more intense and is a practice that is customarily learned via an experienced teacher. It involves being very aware of the physical sensations in the body and making a connection with these and your mind. There are several strict rules involved in learning this practice, so it is not for the faint-hearted!

Another type of meditation is metta meditation. This can also be known as loving meditation. This involves directing positive thoughts, love, and kindness towards others. It can start with affirmations of love towards yourself and then move on to the thoughts being focused on others, e.g., a family member.

Chakra meditation is centred on the chakras within the body. There are seven chakras that are a source of energy and power. This practice involves focussing on each chakra and relaxing and balancing each one. Many practitioners advocate using a colour for each chakra to really focus on each one in turn.

Lastly, there is yoga meditation which many people are familiar with. This involves moving the body into different postures whilst maintaining a regulated breathing pattern.

Meditation is very individual, and one style will not suit all. There has been an enormous uptick in the number of people using mindfulness during the pandemic and lockdowns to combat stress and anxiety. There is a long history of using meditation to improve health as it works on your parasympathetic nervous system, which regulates blood pressure, breathing, and heart rate.

Research has shown that meditation has a positive impact on cardiovascular health. It decreases stress and anxiety and subsequently reduces the risk of stroke or heart attack. As well as being good for your physical health, there have also been some initial findings that when practiced regularly over a continued time frame, mindfulness meditation may benefit cognitive function and quite possibly increase grey matter within the brain.

Meditation is also used to ease anxiety or depression and has been recommended by the NHS as a way to naturally combat these issues.

This has also become increasingly popular with men. Janice Gill, a yoga teacher in Watford, says she has seen a vast increase in the number of men attending her classes.

“Years ago, a man would have been a very rare sight in my classes. Now they are beginning to appreciate the benefits of whole body and mind exercise, and I get loads of men in every class. Many could quite possibly have been guilty of pounding away on a treadmill for hours to improve their physical fitness, but I think now they are realising the huge benefits of a healthy mind as well.”

Janice advocates doing any type of mindfulness on a regular basis: “As with exercise, the more you do it, the more benefits you will see. I get a lot of people who try one or two classes and expect dramatic results, but I try to explain that done regularly, it will give you a whole new level of fitness.”

Whether you grab two minutes on the train or attend a weekend workshop, there seems to be a type of meditation for all that will enhance and improve your wellbeing.